The fall on the Cantabric coast of Spain offers one of the most beautiful and sustained surfing atmospheres you can get. Constant swells combed by offshore winds, crispy mornings with a midday warm ambiance brought by the south winds and some occasional disruptions of powerful northwest storms bringing a full winter ambiance for some days. Finally and most important, the summer crowds are over. In the fall on the Cantabric sea you can pretty much surf week after week constant swells from one to two meters and quite often even more. 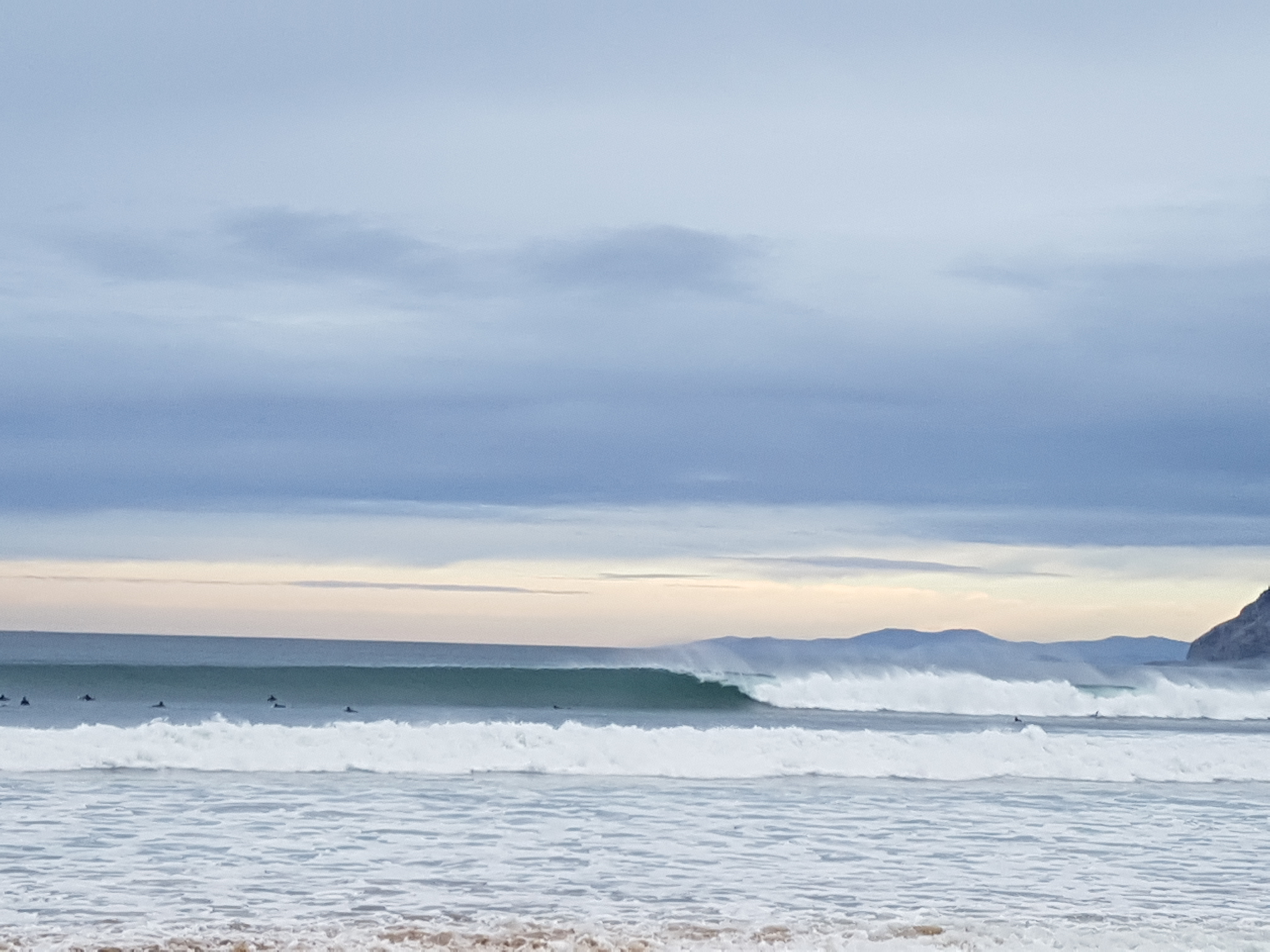 There is a wide range of beach breaks, rock breaks, slow waves, slabs, big wave spots…you name it, you can have it. Another cool thing is that until late october, waters remain quite warm; it’s still ok to surf with a 3/2; however, from then on, you better bring a good 4/3, boots and I would even recommend a hoodie, if you don’t have a cold wish. 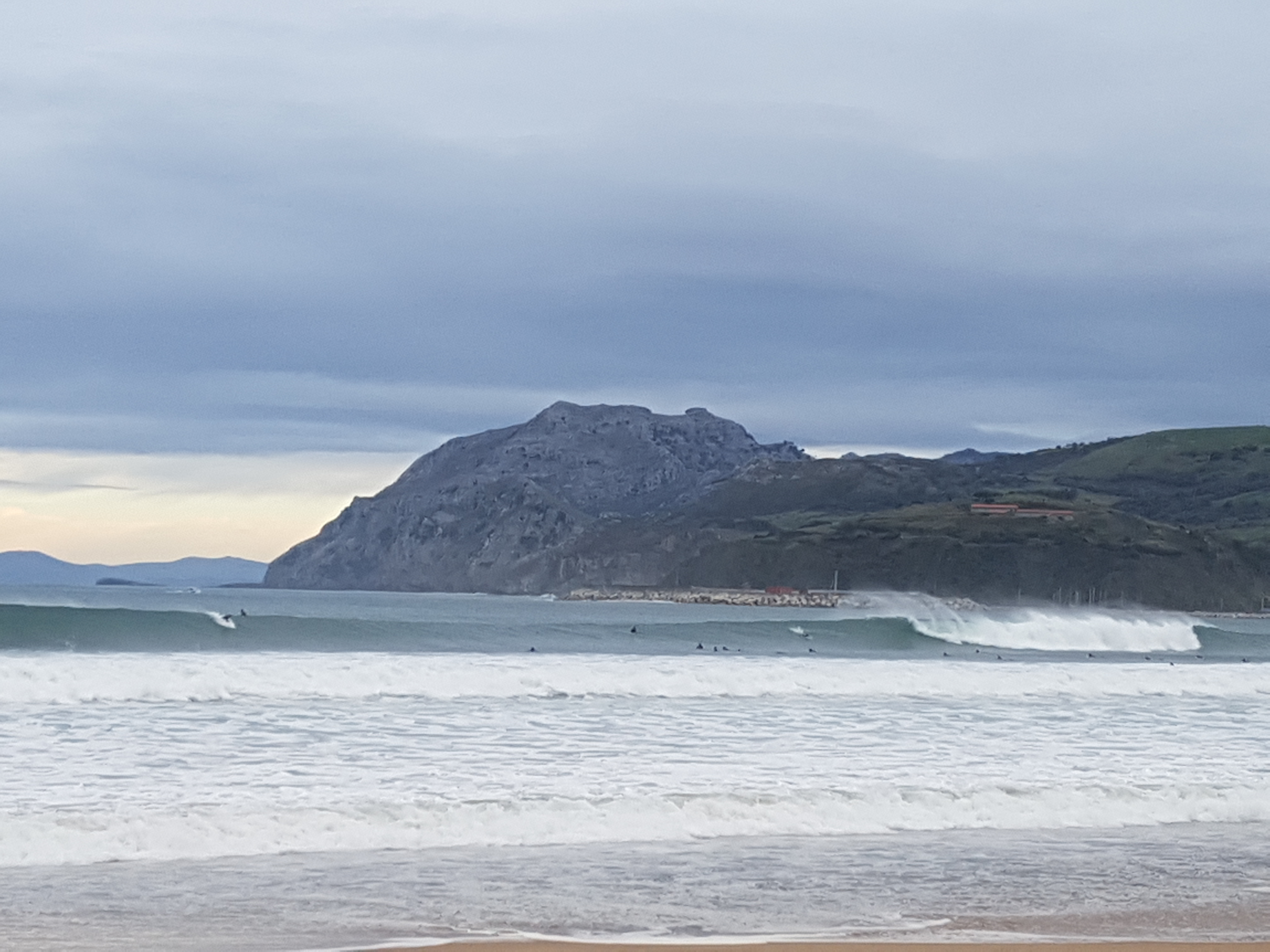 If you’ve been following me for a while, you probably know that I am from the Basque Country; however when you see me surfing, most often I am in Cantabria. How come?

The Basque Country is no doubt the big venue for surfing in the northern coast. Who hasn’t heard about Mundaka, the surf vibe of Biarritz, surf session and pintxos in San Sebastian or the Quicksilver pro france at Hossegor? The basque Coast offers no doubt world class waves, an interesting culture and a real mainstream surf flow. It is where the surfing culture was born in Europe and I guess it is as close as you can get in the old continent to the california vibes. 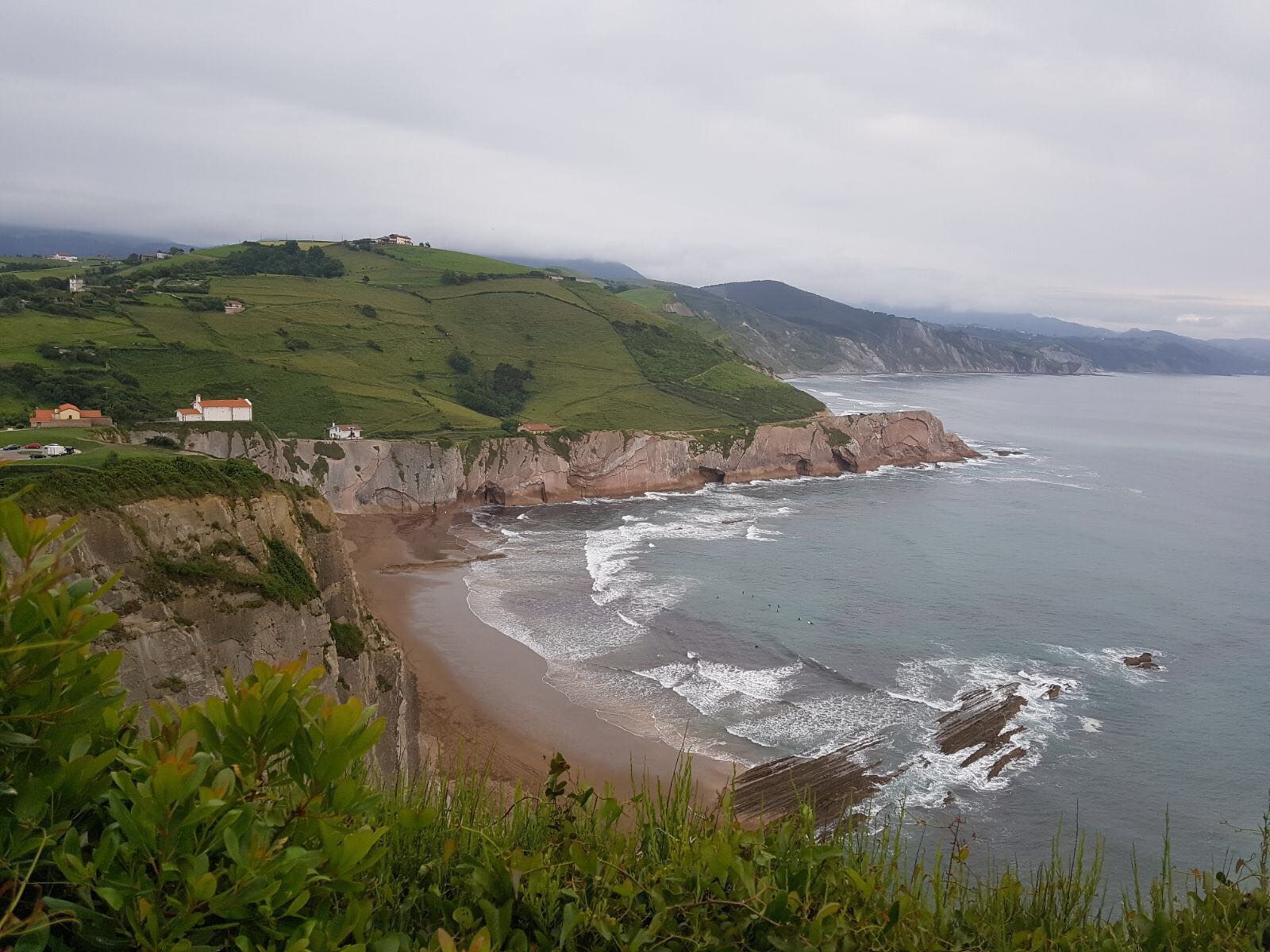 However when you have grown on it, it can get to the point when you are not impressed by the surfy trend anymore and you start to see some structural problems to it.

First of all, the crowds. There are a lot of people surfing in the Basque country. Bilbao is the third largest city in Spain and it can get tricky to find your spot in the break. Around San Sebastian and Biarritz you have not only an extremely large number of passionate and skilled residents, but on top of that, you have to add all the seasonal surfing buns of Europe on their yearly bi-weekly migration. Yeah, apparently in continental Europe it seems that the french Basque country is the one and only place for surfing in Europe. well, to be fair, it is actually the closest. Don’t get me wrong, personally I don’t think our coast is overcrowded. Especially on weekdays and office hours you can get very relaxed sessions; however often there is quite a lot of people and the ambiance is not always gentle. When you surf close to cities, local are not on holidays, learning or going with the flow. These are people with a job and responsibilities but with a far bigger wish of salt water than available time. When people are trying to squeeze a forty five minute session in their office lunch break on the day that they do not have to take care of their kids, they do not always put time or energy in been nice with new people, affort to let some waves go without paddling or making it easier for anyone. These people are not necessarily nasty or salty; in fact, I have some really good friends always fighting in the breakpoint,  but it is a well known fact that the rhythm gets fast and competitive. Locals tend to have a solid level, an extremely good understanding of their wave and a frustration that they can’t surf longer or further from home on their routine life. This can make competition hard for newcomers and it takes a toll to feel constantly on that “en garde” feeling, even for occasional experienced semi locals, just as me. Been there, done that. That is exactly how my university and working life in Bilbao was. In Rome, do as the romans; So I do not see the point of complaining about the urban surf rhythm; it is just how it is. If it’s convenient for you, then it’s a dream to have available surfing this close to the city, but if you seek something else and perhaps more inner peace, then you have to accept that you will have to make some kilometers on the highway and then on the regional road. Perhaps it’s also not a bad idea to sleep in your car every now and then.

Second. The basque highway tolls. The highway between Bilbao and San Sebastian is one of the most expensive in Europe. Pretty much ten euros for a fifty kilometer stripe of terrible highway. Moreover, straight after, there are two more tolls; first at the border and then for the further stripe of road on the french Basque coast. Almost more annoying than having to pay, is that the Basque roads are quite unpractical for surfing. The regional coast road goes along a display of mountains, cliffs and water fronts that makes it extremely beautiful to drive, but incredibly slow. The highway on the other hand, goes slightly inland, so you cannot really stop by and take a look at the real conditions for fine tuning the spot you will go to. Hence, for example, if you aim to Mundaka and then it turns out to be too big, too fast, too crowded or too messy, then it is quite a long drive to find a valid second option. Spanish basque breakpoints can be quite an all in bet if you do not have extremely large amounts of time. 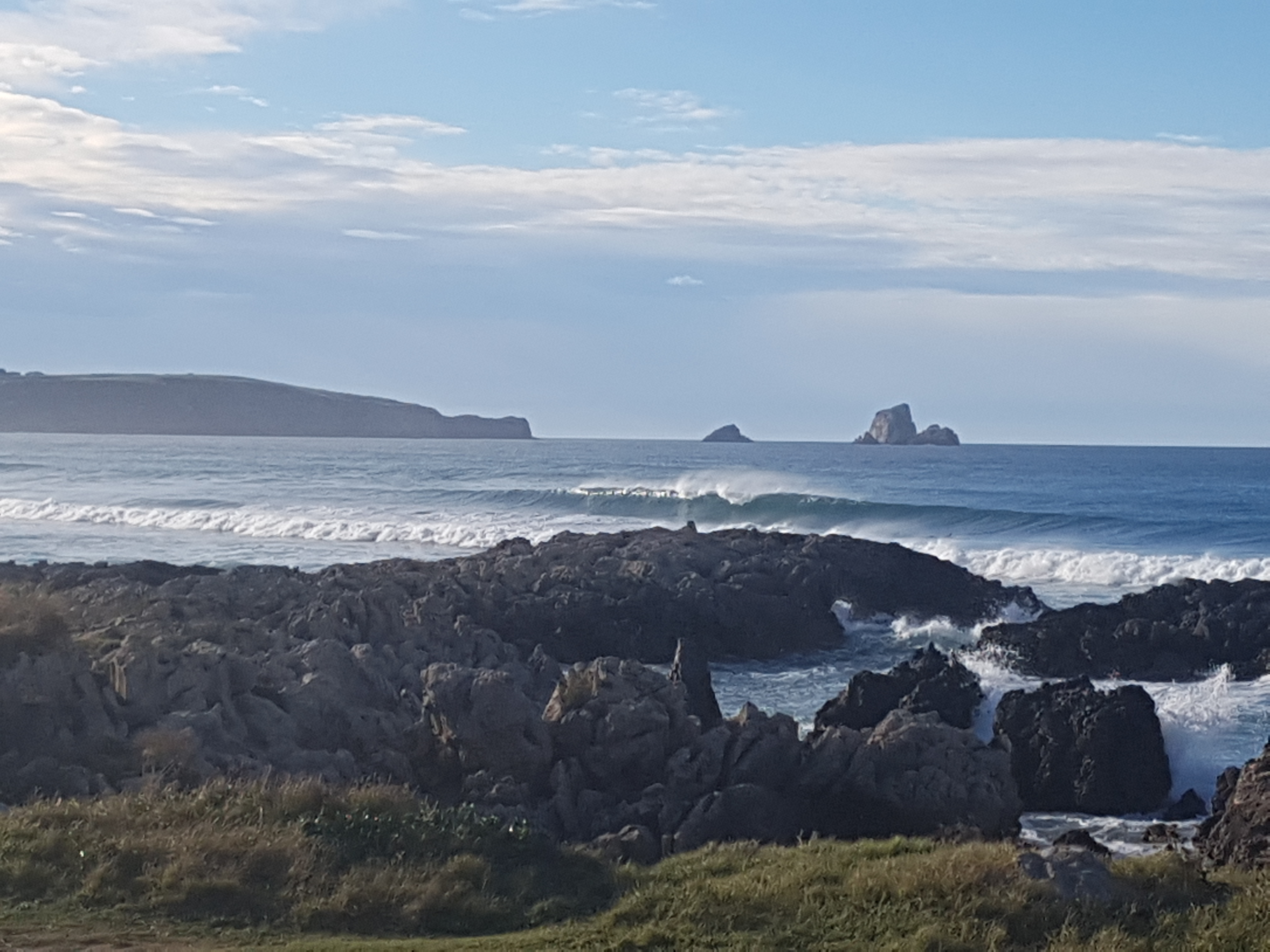 Cantabria is our neighboring region to the west. Actually half of my family comes from there. When growing up, I spent my summers in Laredo, where my father would take us religiously every weekend due to his windsurf passion. There is where I first got into playing in the breaking waves, for then later transition into bodyboarding and finally into surfing. 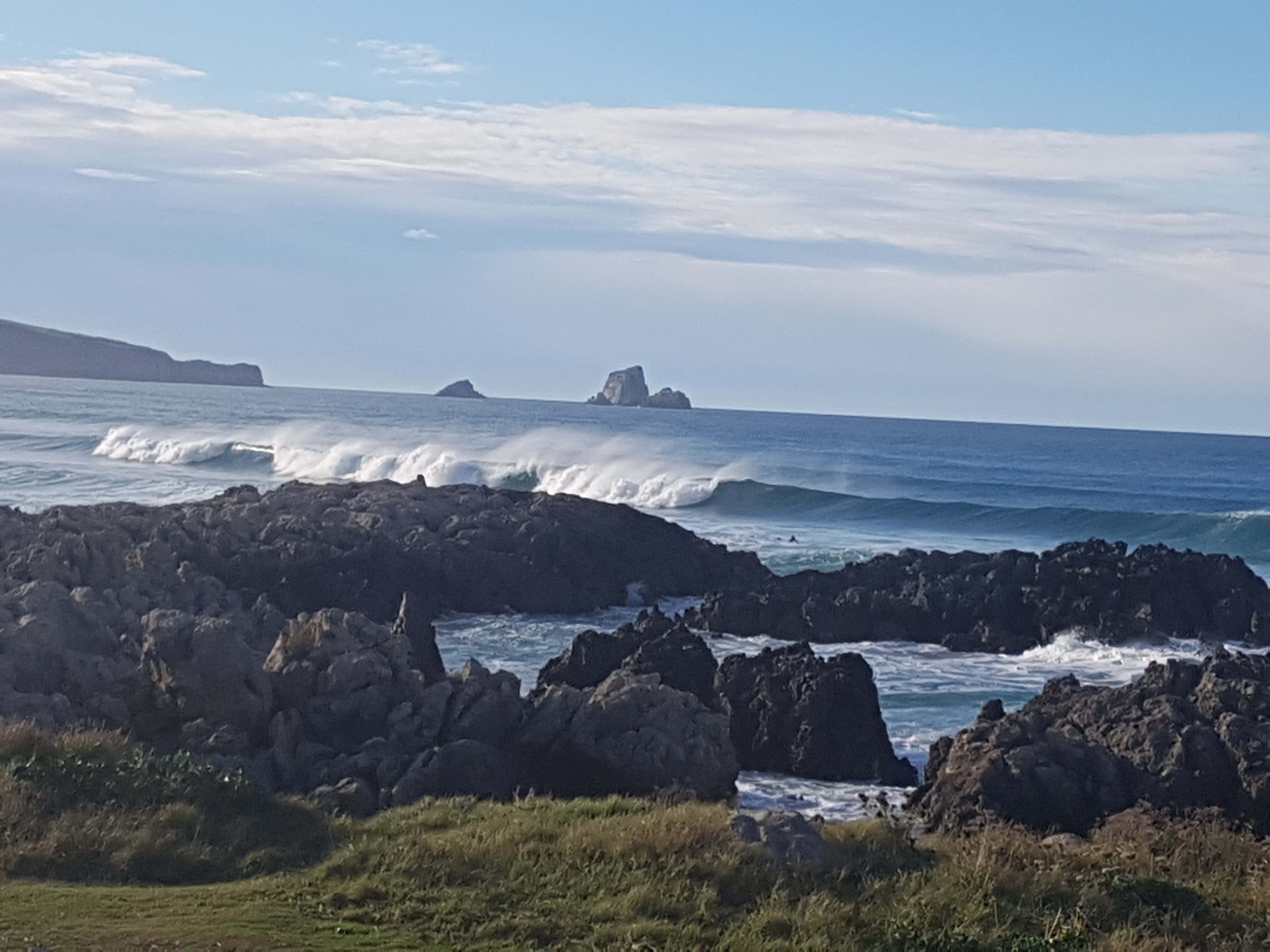 The highway going through Cantabria all the way to Galicia is free and goes right by the coast. It is fairly easy to check some key breakpoints from the highway and evaluating the conditions. The A8 provides fast access to reliable break points and if you know your way around, there is some margin to explore a bit further for those semi secret spots that are all around. Moreover in Cantabria, there is a larger variety of spots that hold different conditions, so it is easier to fine tune the best session according to your level. 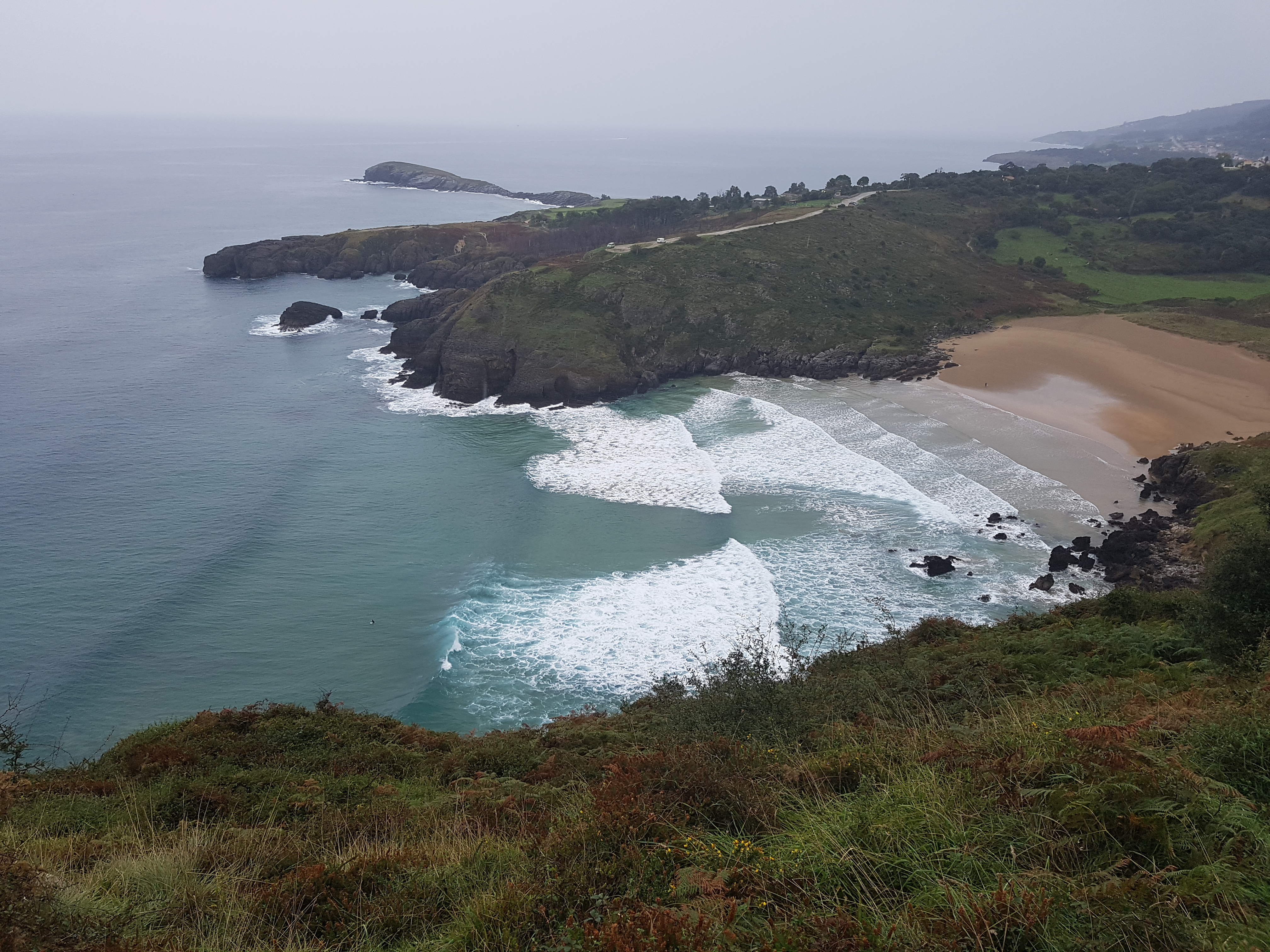 The more you go to the west, the less population and especially the less surfing population. The more you drive west, the easier and more drama free for sleeping in your car, eating good local cheap food and finding semi solitary surfing spots. It can even be a very good idea to keep towards Asturias and Galicia. Don’t get me wrong, you will still be extremely far from the feeling of been the new surfing pioneer discovering waves in micronesia, but the whole key is far more relaxed. In Cantabria there is as well hotspots that breathe surfing with it’s own local scene, especially on the beaches close to Santander such as Liencres and Somo. At the end it is not all that different from the Basque country, but perhaps it is a bit easier to decide if you want to be on the middle of the scene or go to places a bit more wild. 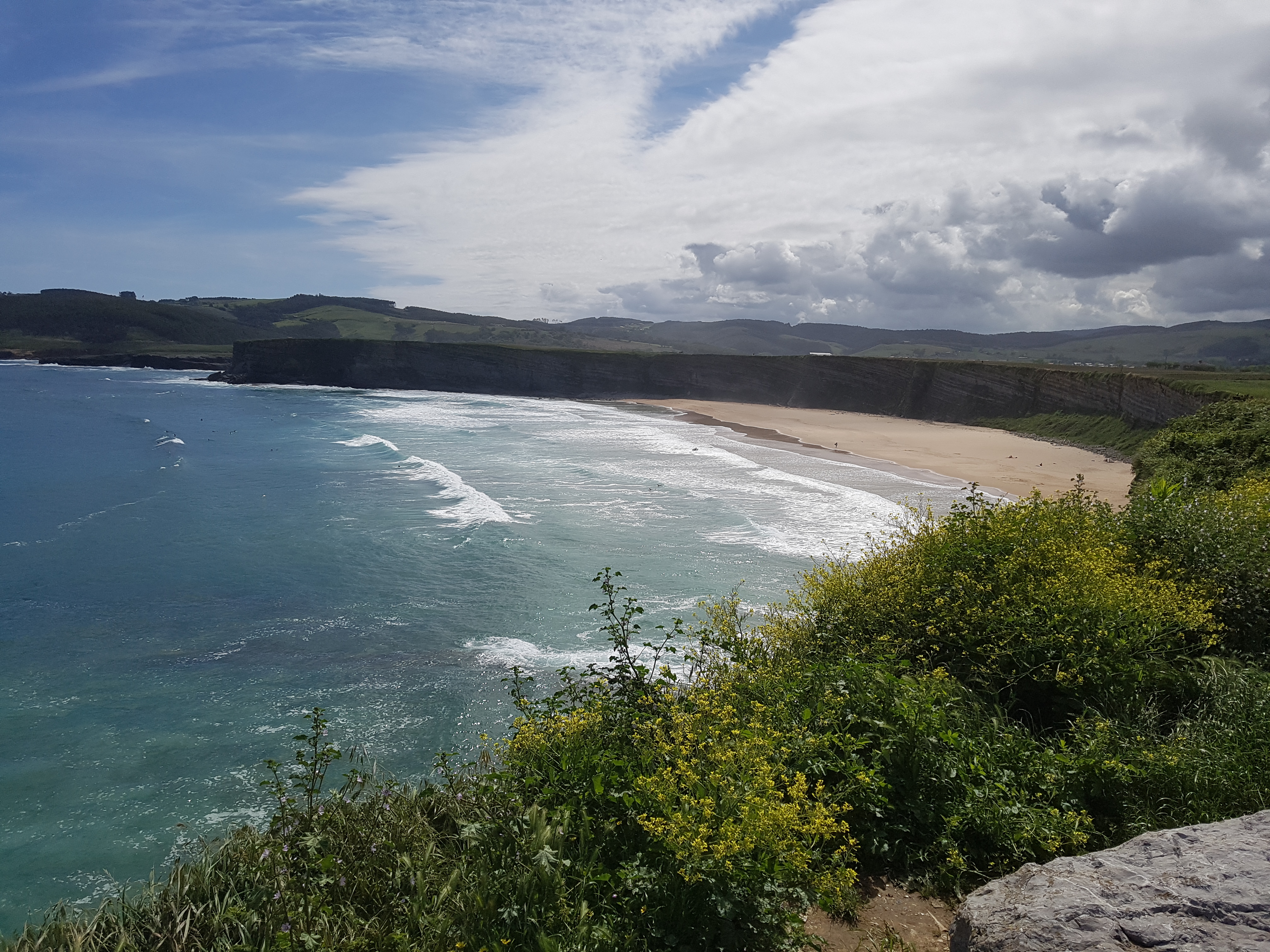 I have always stated that in Northern Spain the prime season is the fall.  Weather is far more stable in the fall that in the summer. South winds provide quality waves and mild temperatures but somehow the ocean achieves to pump swells over a meter and a half every week. Of course daylight and temperatures are lower than in summer, but 15º and sometimes even twenty, just feels for me like a good Norwegian summer day. Moreover, when the storms hits from the northwest you can get some ski touring preseason all the way from late october. Snow will just last a few days before the south winds come again, but if you are fast and lucky, you can enjoy some awesome mountain days. 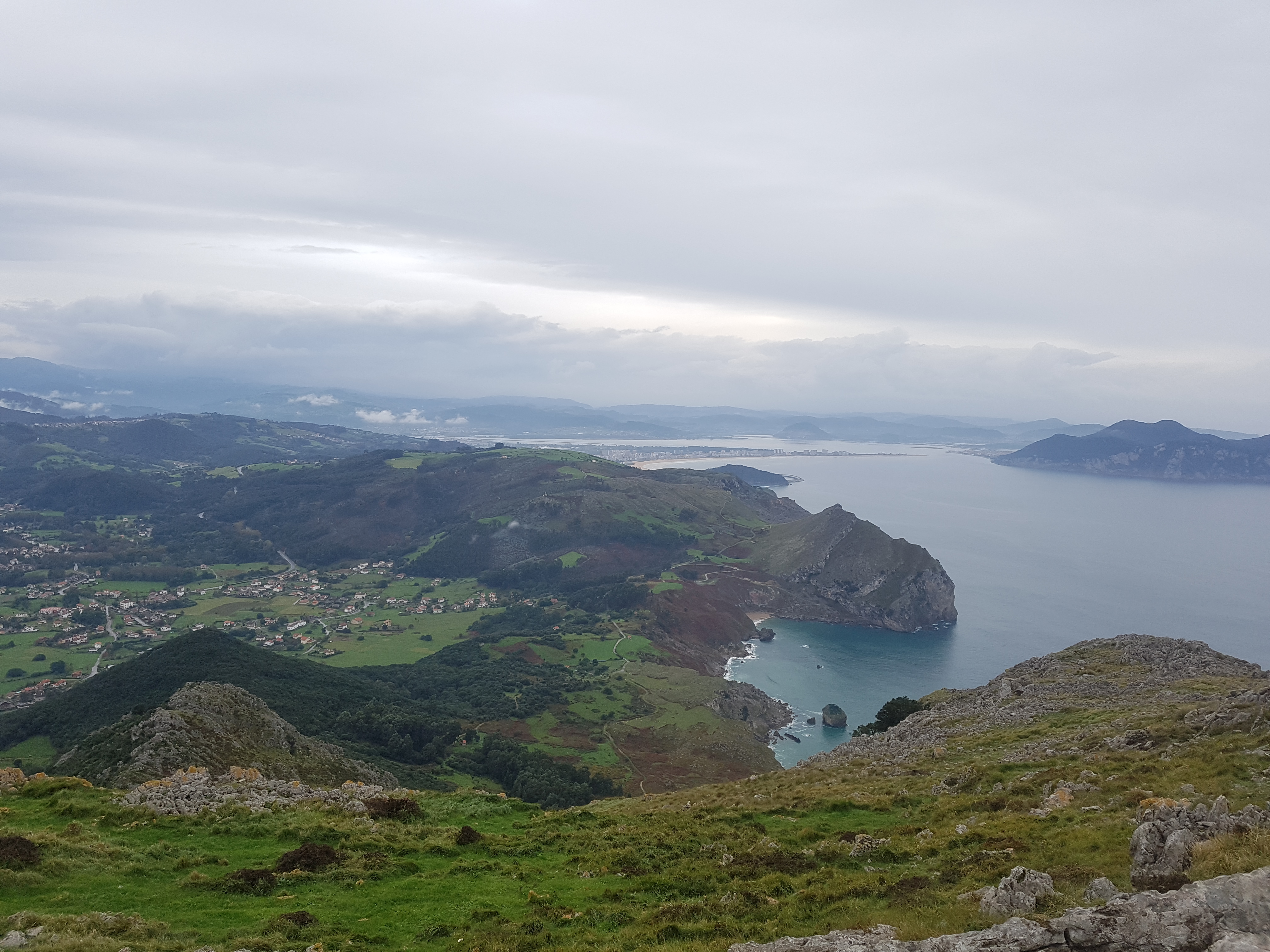 The coast of Cantabria offers really interesting coastal mountains for days of hiking and climbing. Even better, on the border of Cantabria and the next region to the west, Asturias, lies one of the most emblematic mountain chains of the iberian peninsula: the Picos de Europa: high mountain terrain at it’s finest. It has this limestone monster vibe similar to the Dolomites, with peaks around 2800m, but just a few kilometers away from the coast and the northwest storms, that provides this winterish patagonian key. 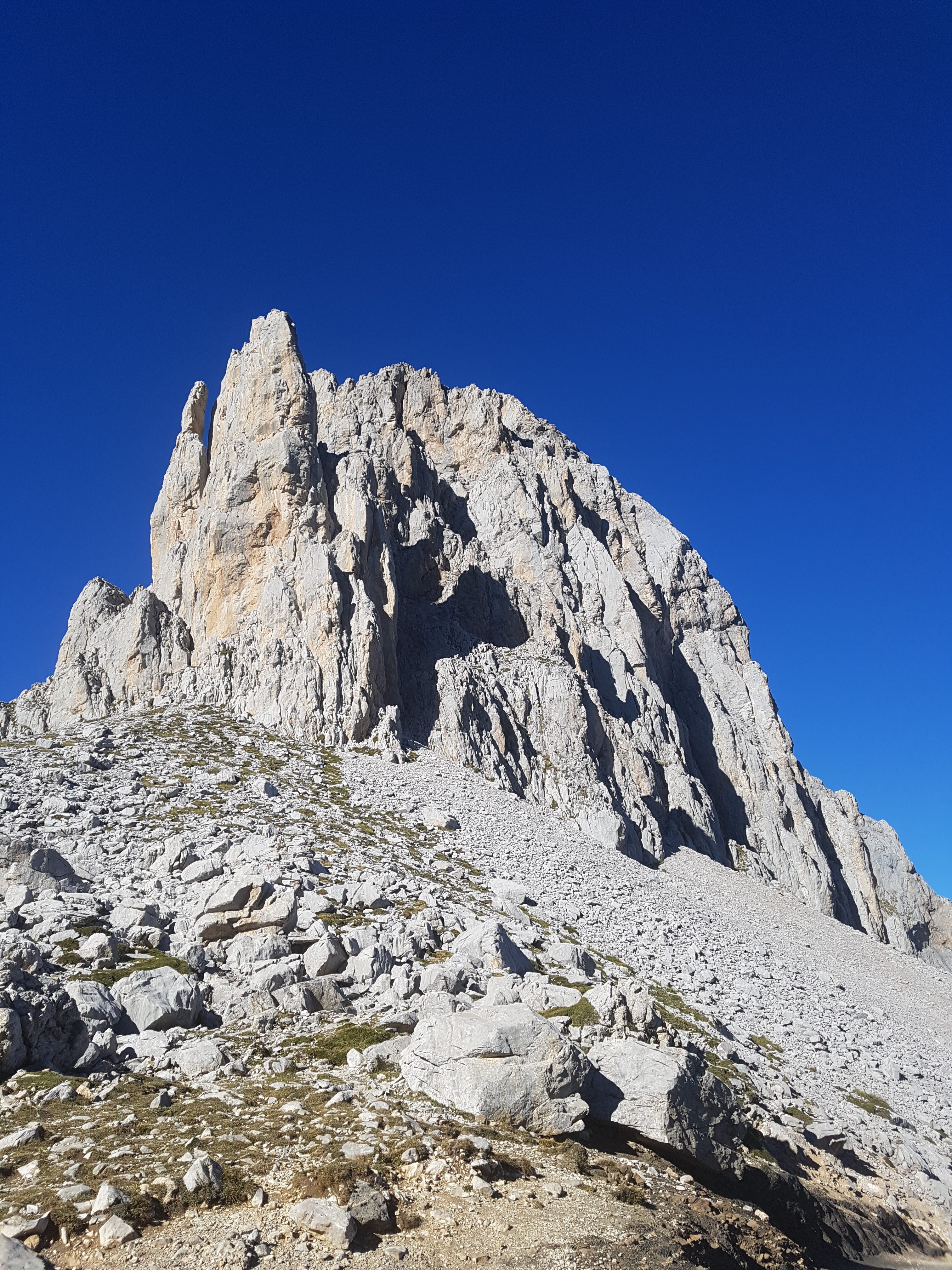 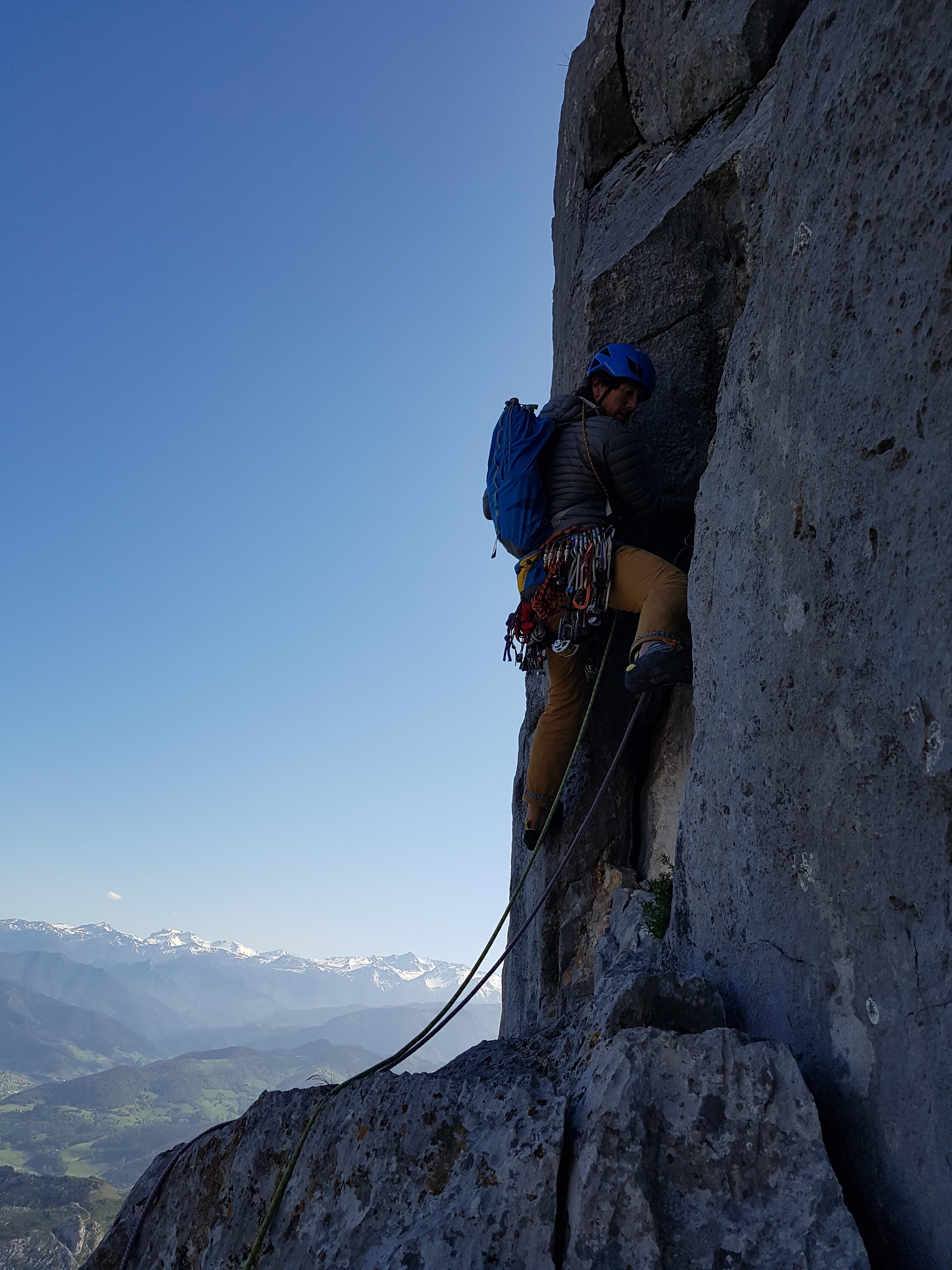 From most of the surf breaks on the west of Cantabria, on a clear day, you can see the Picos covered in snow and ice extremely close to the coast. Surfing close to those monsters provides me a similar fulfillness feeling to skiing straight to the ocean on the Norwegian fjords. 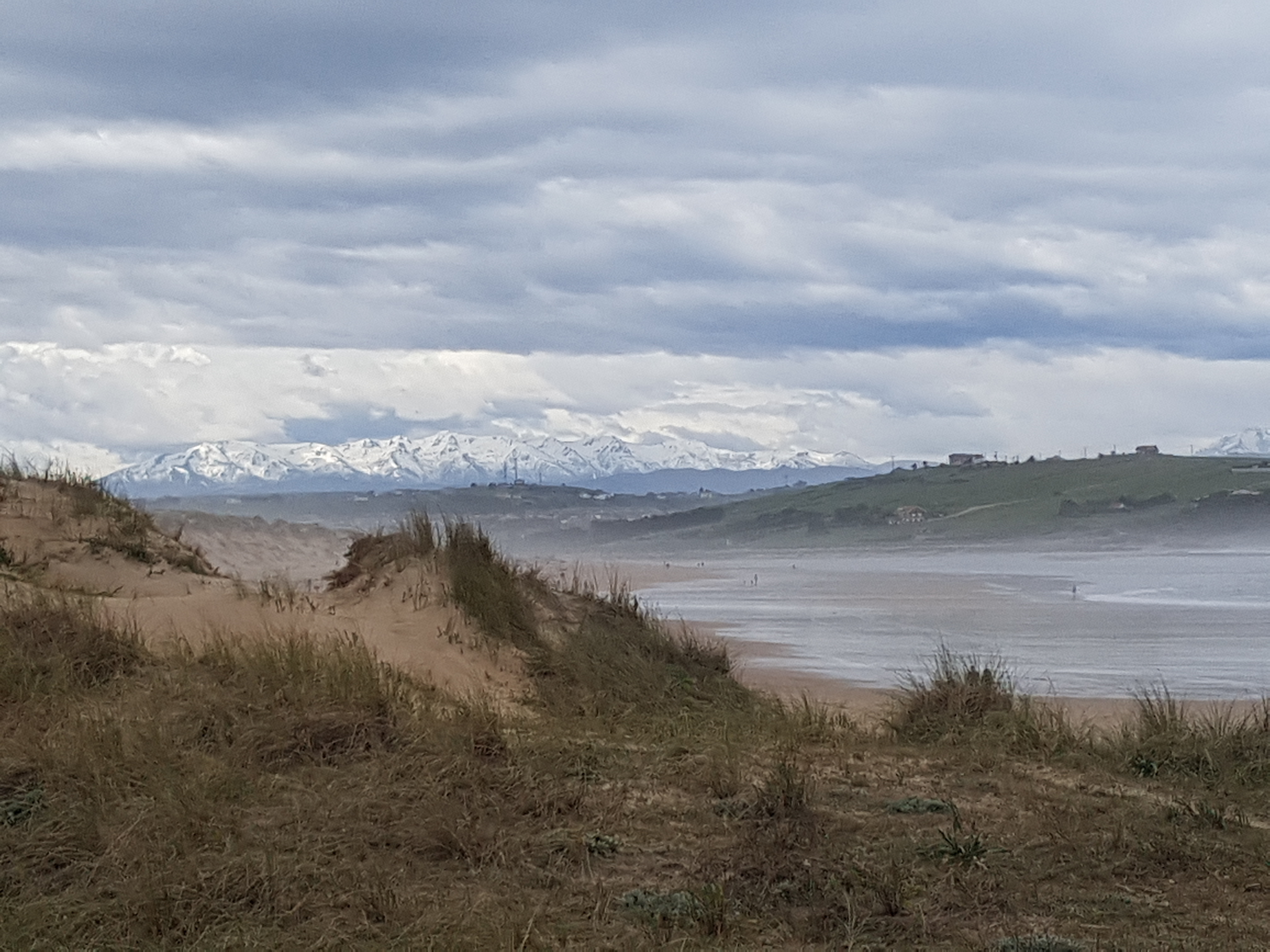 Every year we achieve to match a few days with a ski touring session in the early morning for then ending the day with a fast sunset surfing session. There are not a lot of places in the world that can offer that. As I tend to say, you will most likely meet me on stormy weathers, where mountains meet the ocean. On the fall, to me, the place to be is Cantabria.