We were excited to drive to Nordkjosbotn and meet Aniek for our next adventure. However, as we made it quite early over there, we decided to go smash some Ice to fill the day as we found a few walls that seemed pretty much like sport climbing crags. Pedro fixed the rope and then we went for a few lines.

Ok, after a few hours, we realised that we better find a spot for spending the night and making food. Loads, as we don’t expect exactly a casual walk when the plan comes from Aniek. 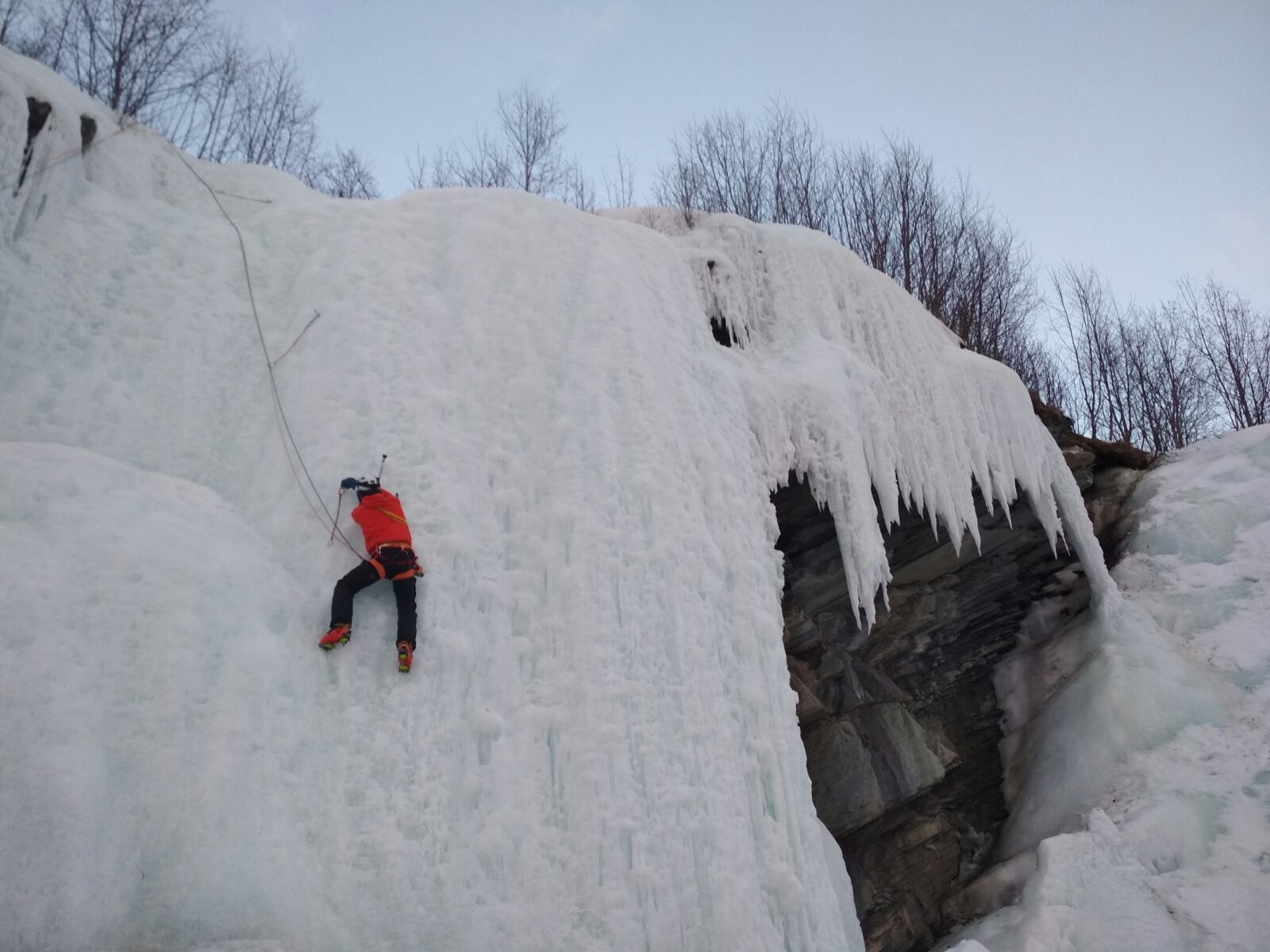 The following day we made it to the meeting point. Aniek was already there and we were waiting for Karin. We hadn’t met her yet. A few minutes later, this massive pick up with six Husky cages integrated in the back parks in. A blonde smily girl with 115 wide twin tipped skis and two wolf looking huskies pop down. That’s Karin. For some reason we didn’t got surprised. As soon as the huskies finished smelling and licking our hands, we obviously dived on those fluffy balls for giving them a fair amount of petting.

Time to get the planks on! 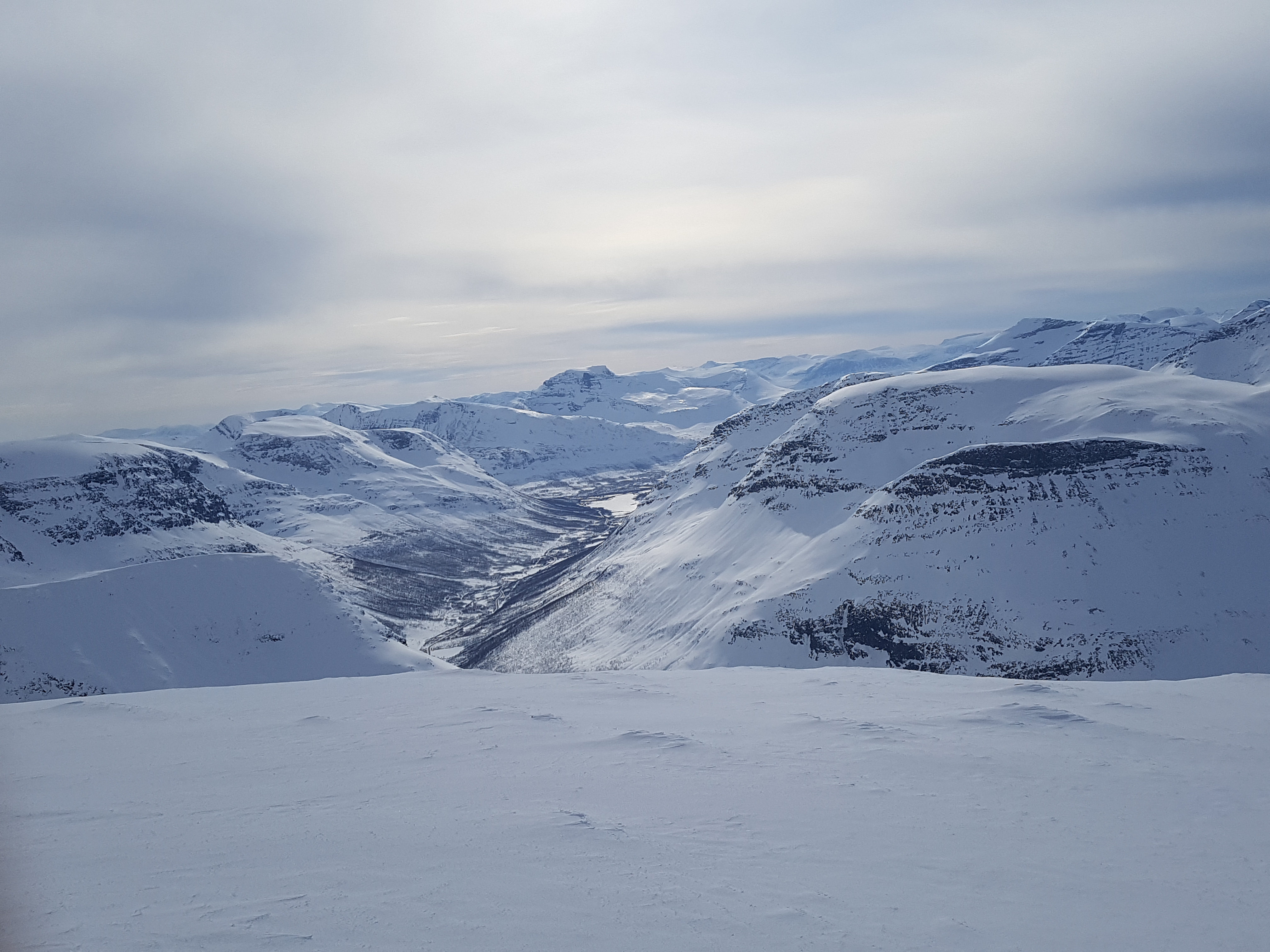 The objective was one of the pillars at the entrance of the Tamokdalen: Sorfjelltinden 1468m. Felt good to have a chance to redeem ourselves with this valley. More over Karin told us she didn’t lived far and she knew that mountain by heart. In fact she had been there the day before. The dogs were knowing the mountain even better than her, and were always teasing the first one of the group to go faster or to make sure that we kept on the line. Aren’t they lovely? 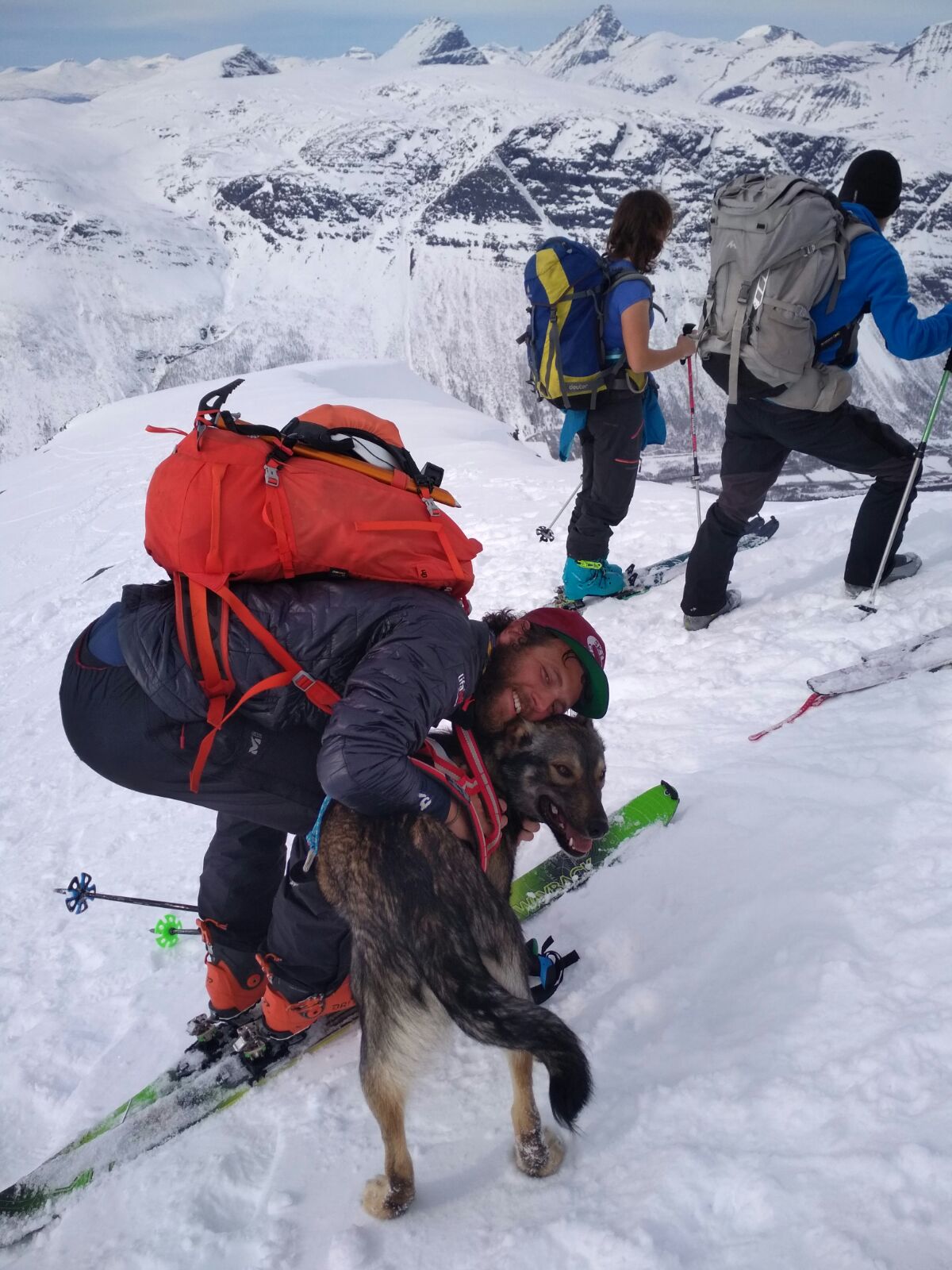 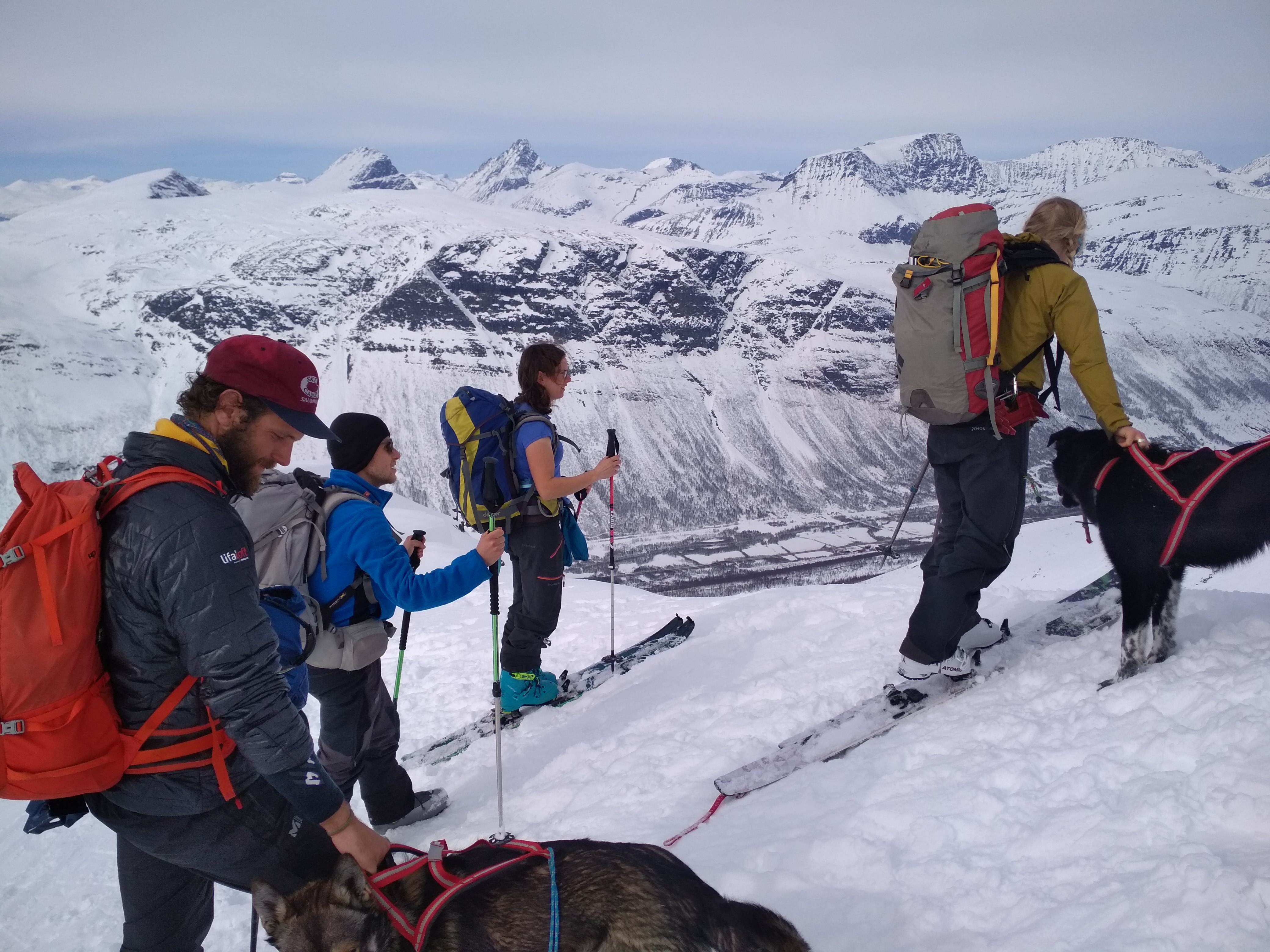 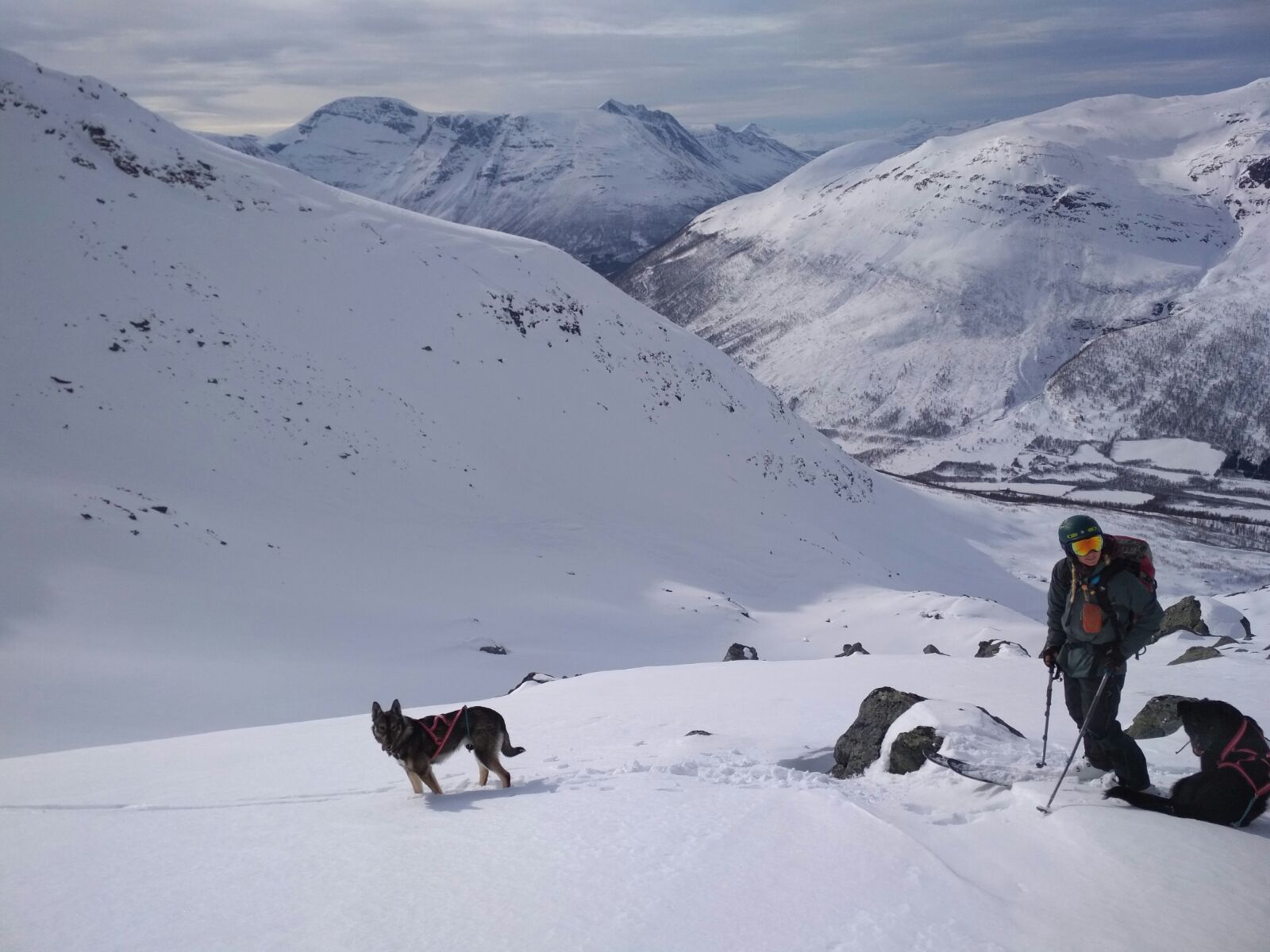 Karin took us to a sector that was surprisingly fun skiing. As we had such a great day we wanted to invite the girls to some snacks and Pedro is the king of Snacks. We had serrano ham, spanish dried meat and sausages, christmas figs and some other goodies. Karin was a great contestant for the snacking title as she baked a really good vegan blueberry cake. She invited us to her place for as she was living just in the valley behind: Signaldalen.

We got amazed on the drive there with the beauty and the wilderness of the valley. Crowning the valley, Otertinden standed straight as one of the mountains with a strongest presence in northern Norway. 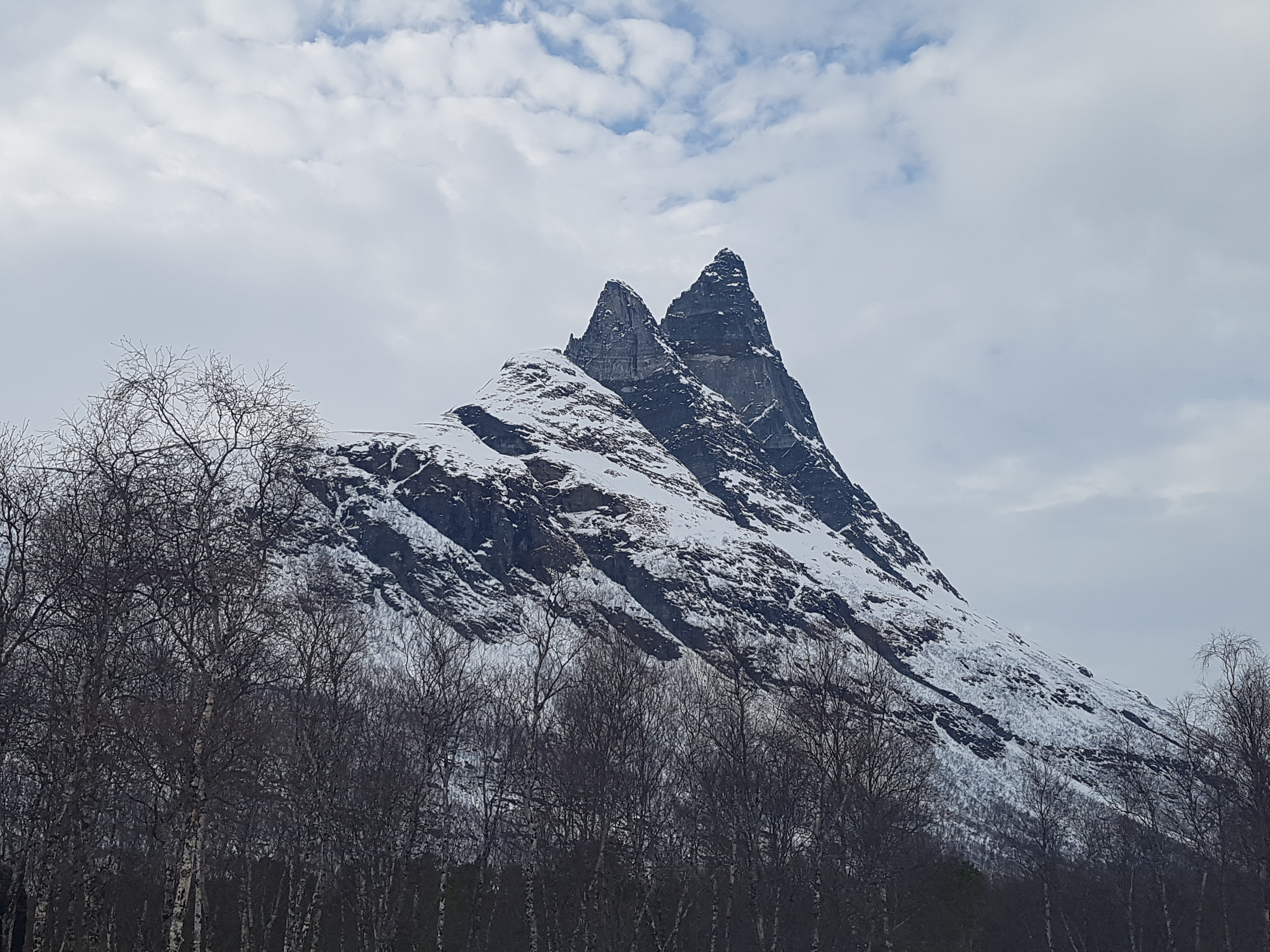 On the flanks of the valley, first class Ice climbing lines popped all over. This definitely was a place for the wild and Karin’s house couldn’t suit any better.

The twelve dogs were standing outside few metter from the wooden deck and the porch. Her husband is a mountain guide from the region and her goal was to finish training the dogs for starting offering special dog sledding excursions from the following winter. 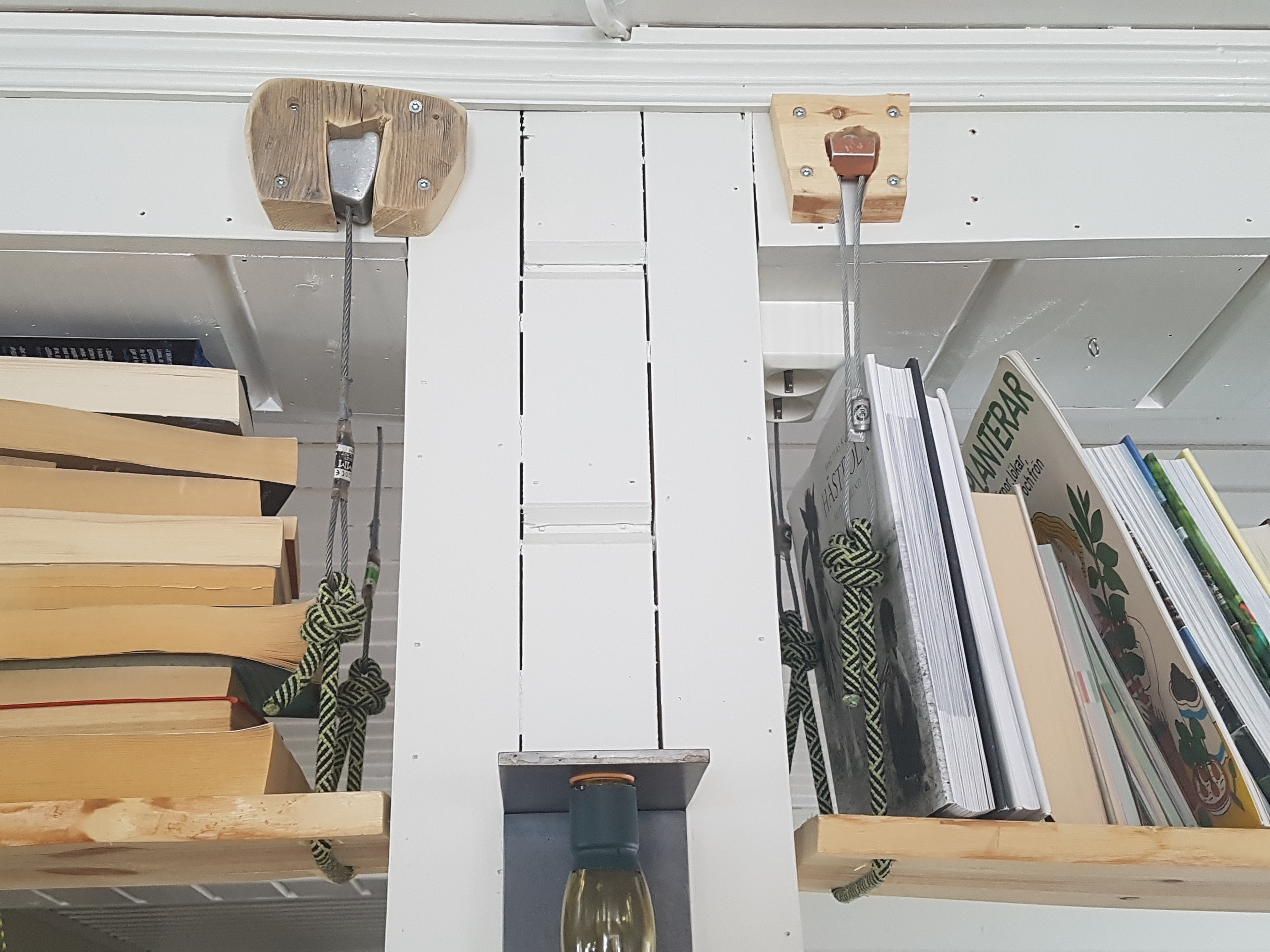 I loved how the house breathed climbing. Nuts and cams were holding the shelves, they had a great collection of climbing books and really badass photos of their expeditions. We had a cozy time, talked about climbing, the bandido lifestyle and ate loads. 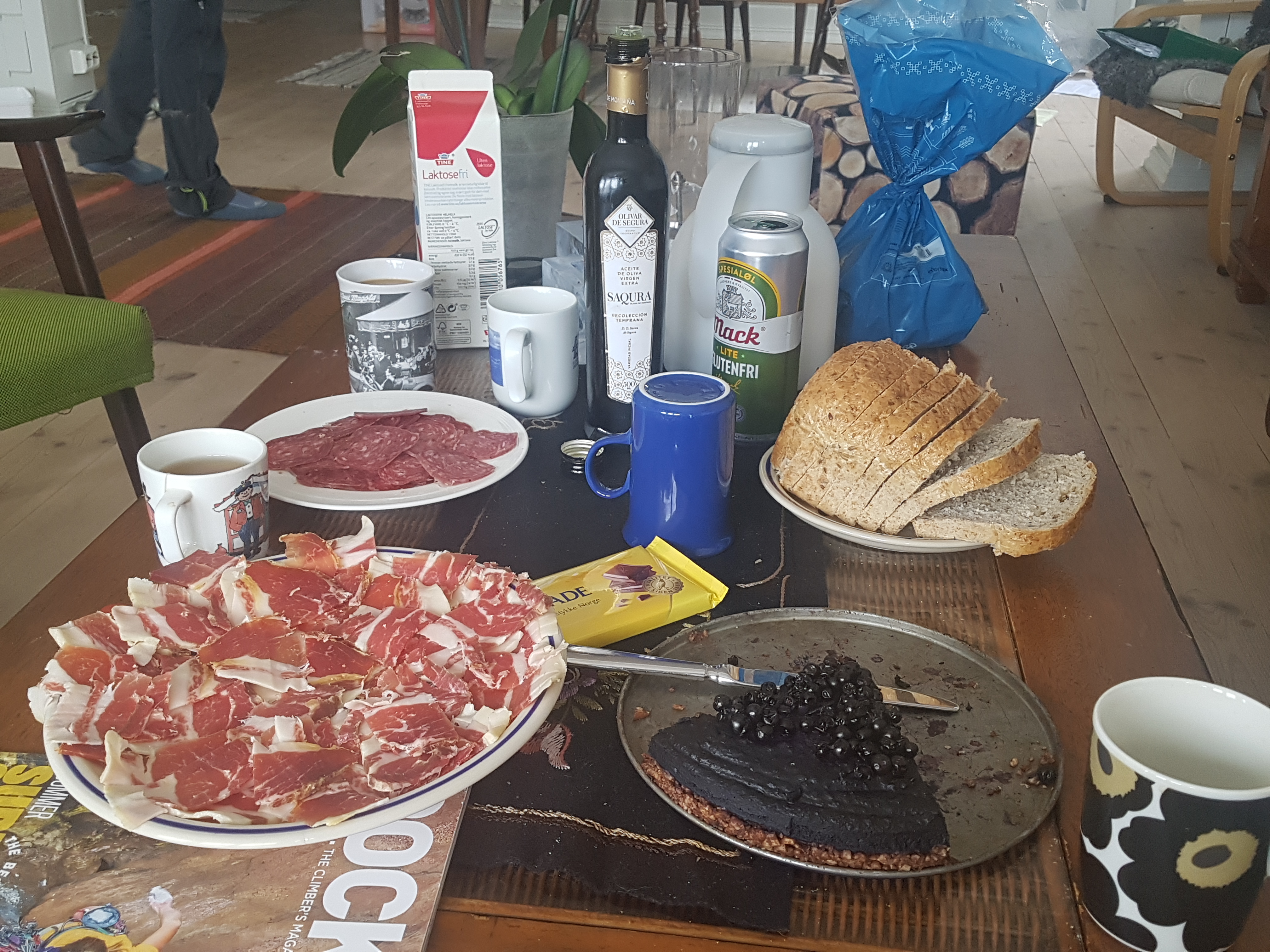 After a few hours, it was time for Anek and the guys to keep moving. We had to drive to Lyngen and check our beast: the Godmother couloir, the mother of all the couloirs, as the guide book says. 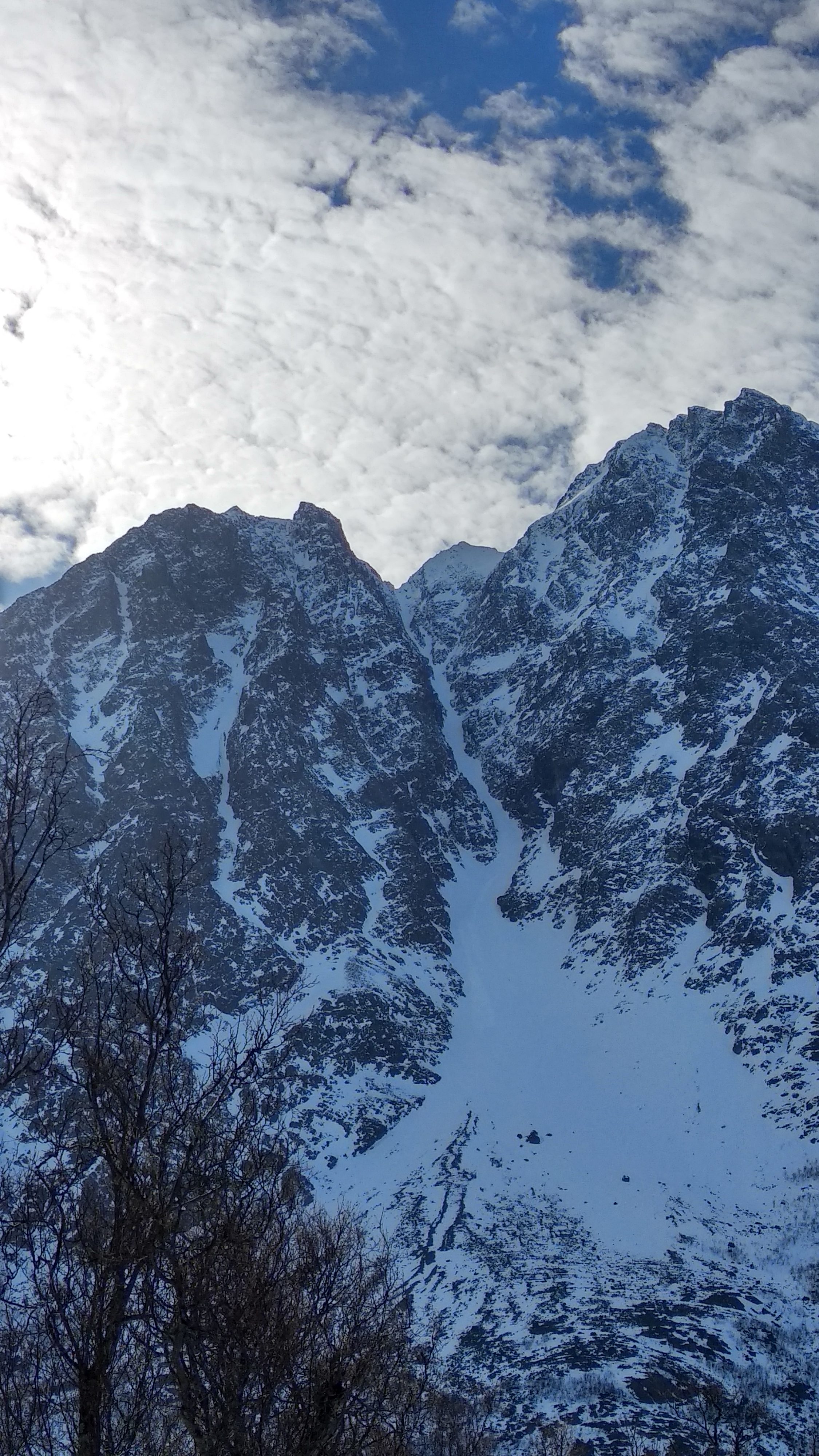 The day after we drove early to spot the line. Logistically it’s a pain in the ass. You need to hike some three hours bordering the fjord through annoying rocky uneven terrain constantly exposed to big north faces. The avalanche level was three, but had been three for many days in a row. As we had experienced before, things could change a lot depending on the facing and microclimate, so we decided that the best strategy would be to drive to the beginning on the approach, go to the base of the first N facing couloir and do some snow profiles on it to see how it feels. If we would get a good feeling we could rather hike all the way to the base of the godmother, do a bivy, and hit it early the following day, or rather do a very early start and do the approach, climb and ski all together in the same day. Anyway. It didn’t really matter. 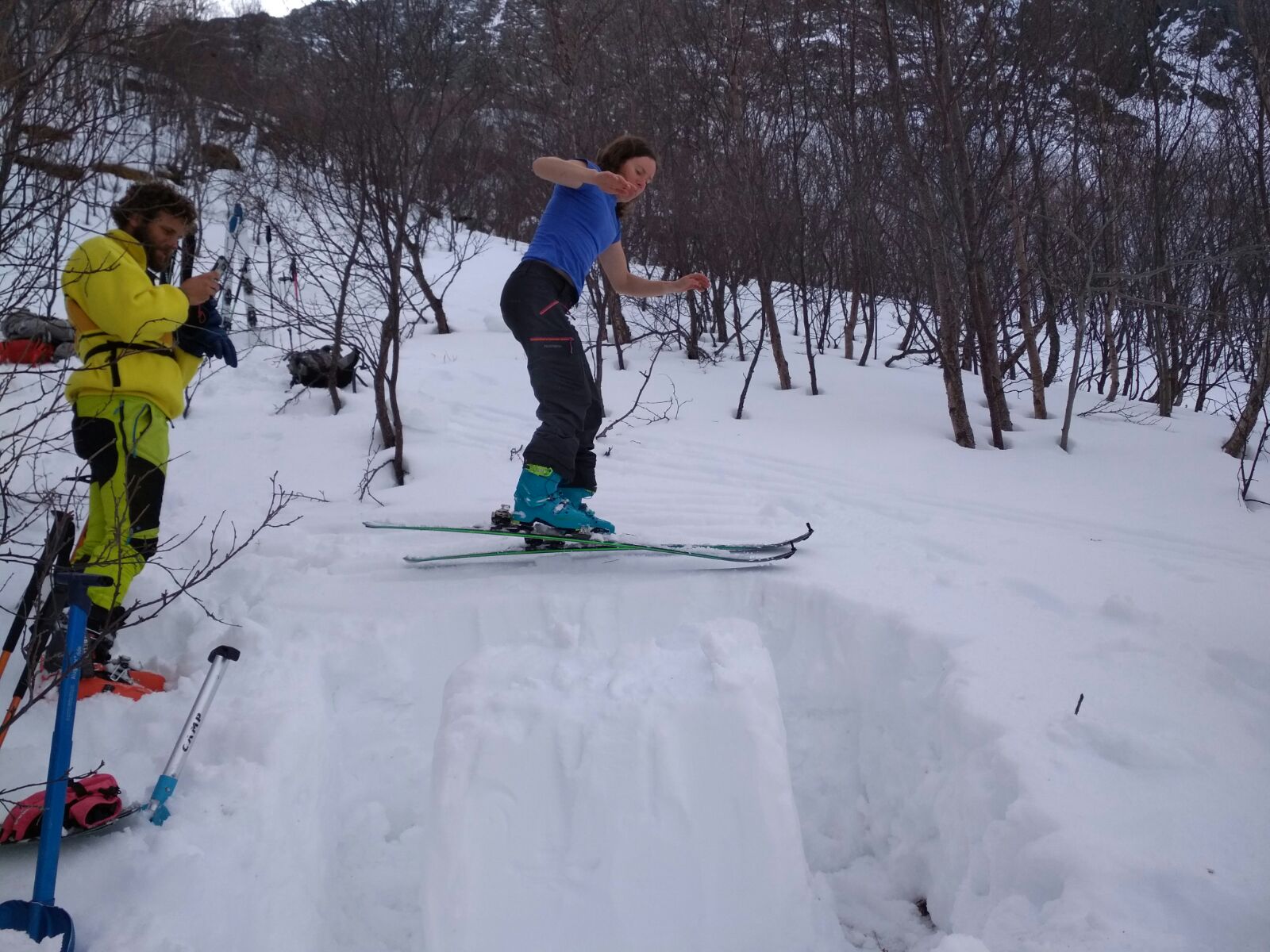 On all the snow profiles that we did we found a huge layer of sugar snow buried under a compact layer. Lot of strength would be needed to trigger it, but in case of triggering, it would go BIG.

Moreover, while working on our slope we spotted several big purges on the south faces in the opposite side of the fjord. That was more than enough for us to say no to the project and look for something more mellow, panoramic and risk free.

We drove further north, to the end of the road at Koppangen and aimed for Goaldorri. The ski descent from the car looked elegant, however, midway, it turned obvious that the hike up was going through a terrain trap and we did not felt confident on it with the current conditions, so we turned back. 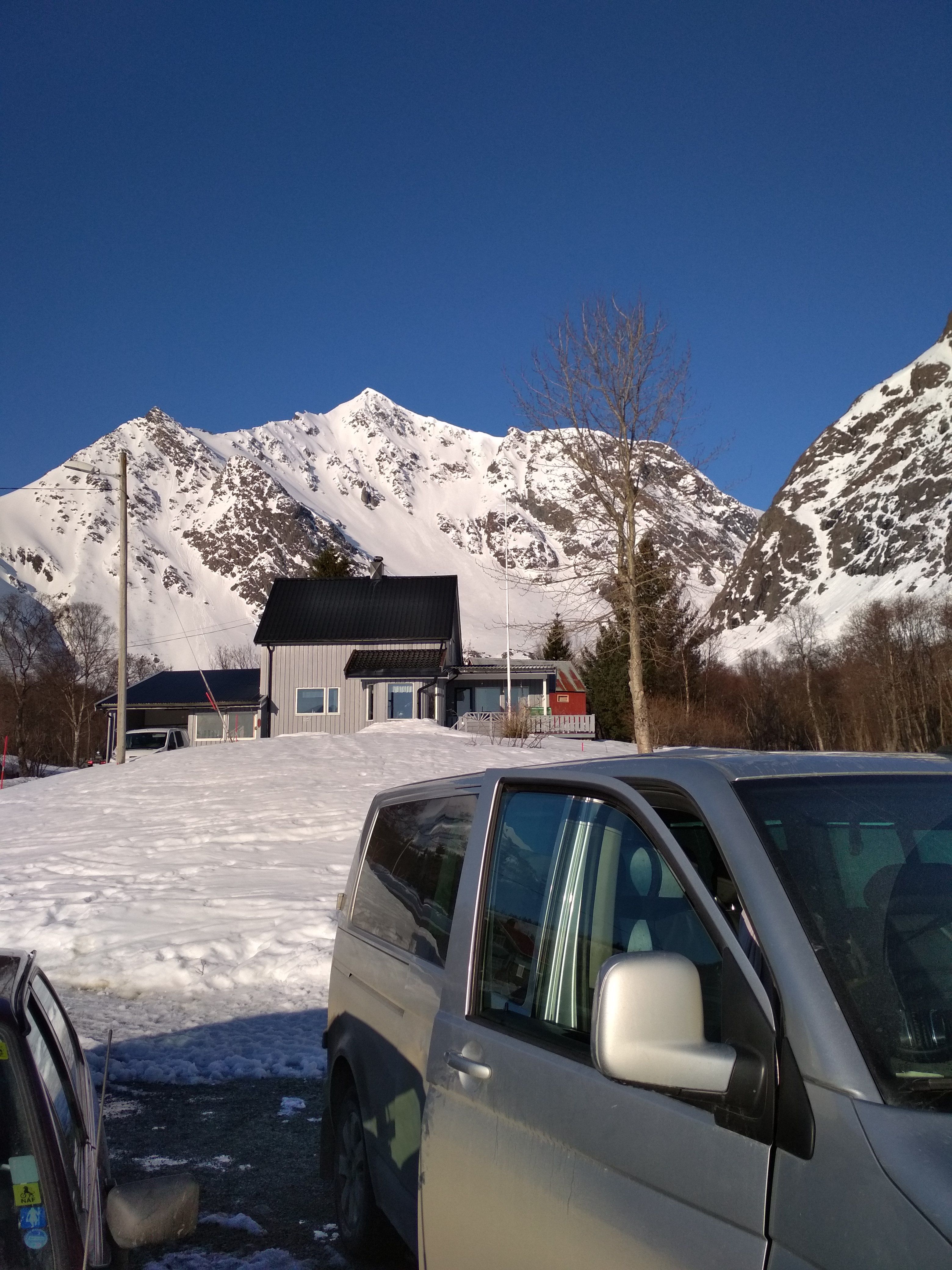 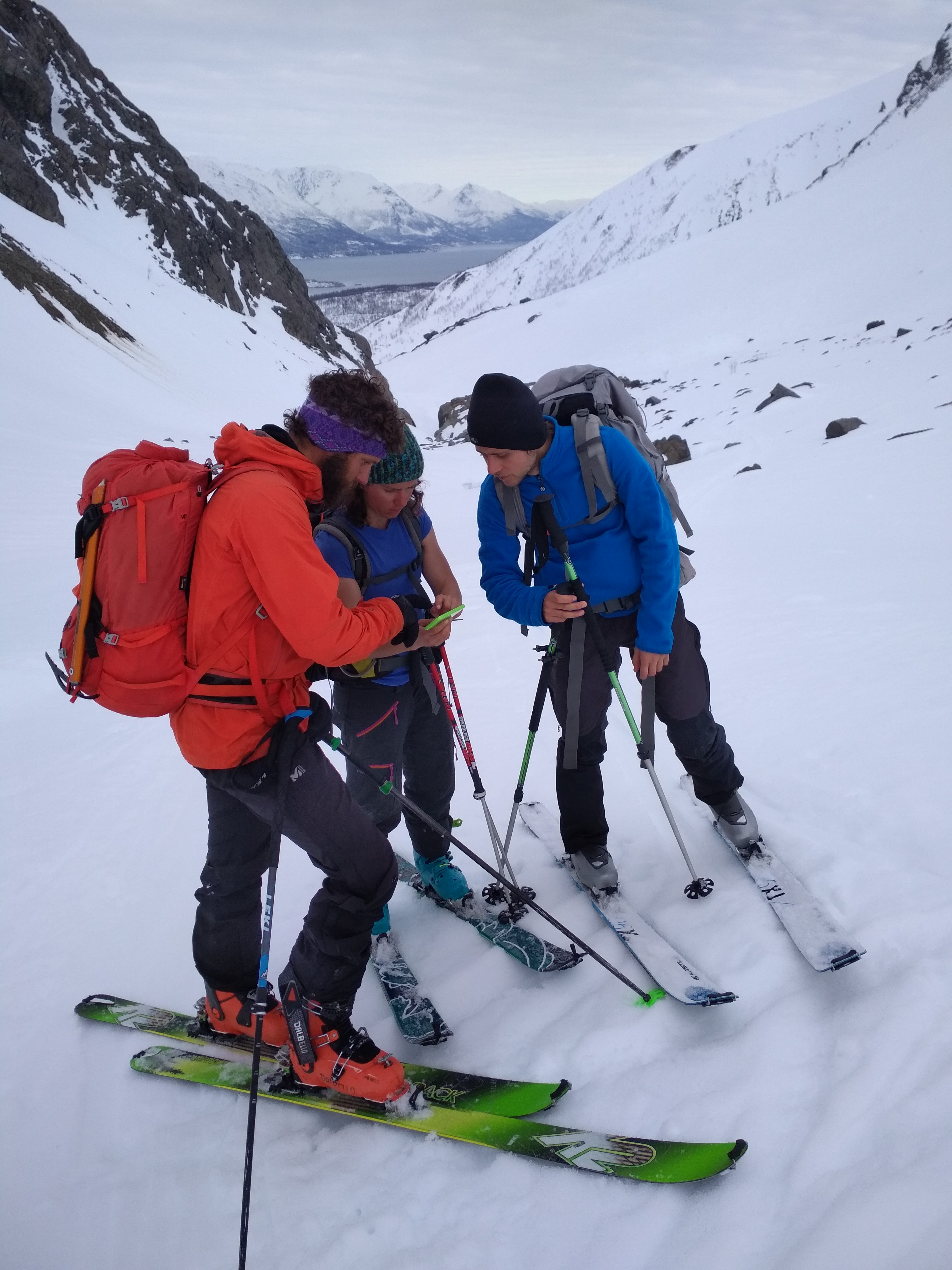 No more drama needed, time for a swim in the fjord. Well, Aniek, Pere and Pedro did, regarding myself…it was more of a miserable desperate splashing with quite a lot of moaning included. I guess that’s what you get when trying to swim in the arctic at the end of a glacier river. 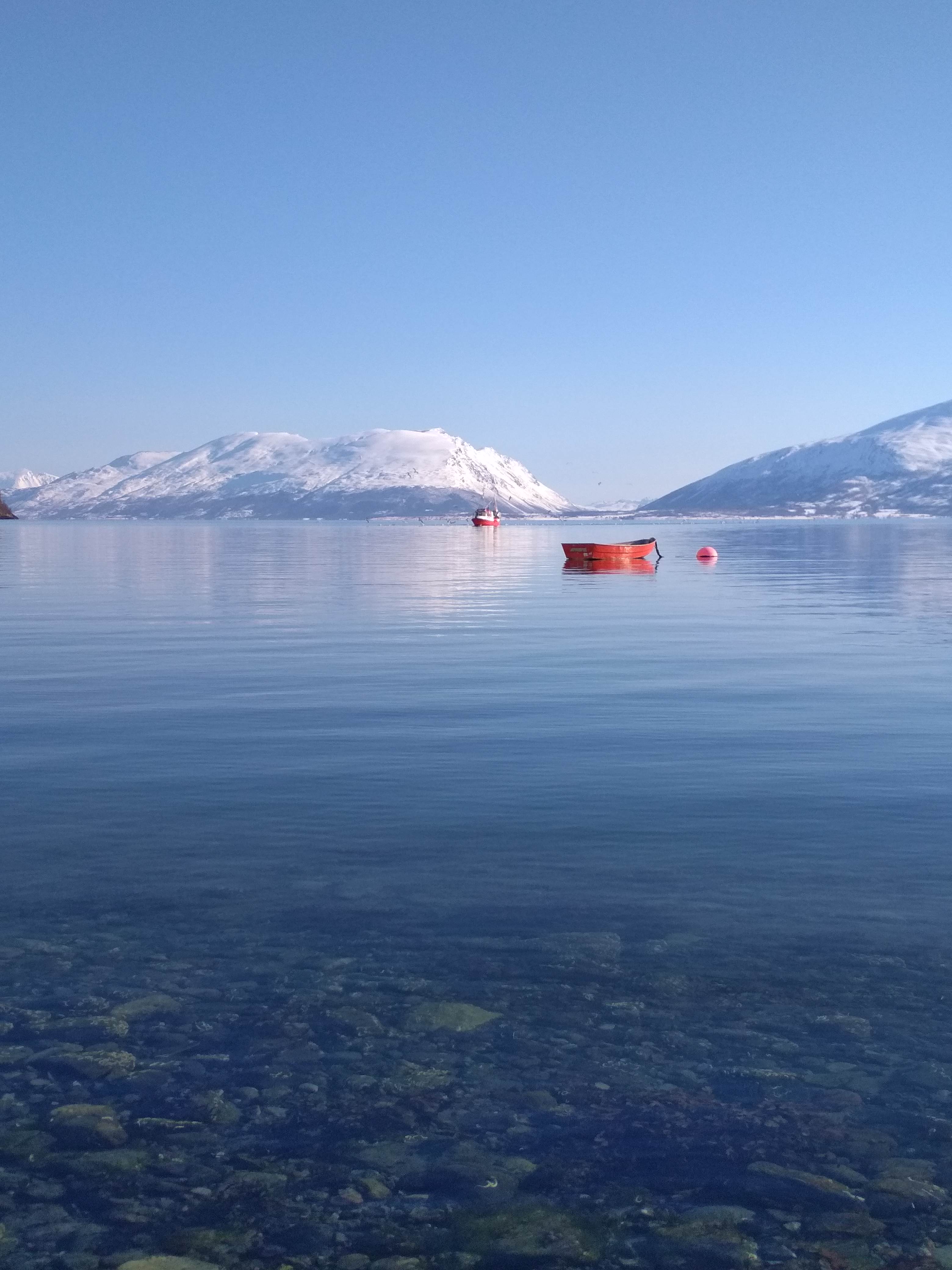 The following day was going to be our last ski day with Aniek and perhaps our last day; depending on how much we wanted to stress with the packing, driving, and cleaning the van. We decided to go this time for real for something mellow and panoramic in Lyngen, at least just to be on a summit and enjoy properly this place that everyone is talking about. We aimed for Kavringtinden, an elegant mountain with soft lines.

We got a bit tricked by the general silhouette of the mountain; once on the base of it, when we decided to hit it from the main slope, we realized it was way bigger and steeper than what it seemed. One of the flanks felt uneasy under the heavy sun while the other part remained icy and exposed. Reaching the summit ridge was a real release and soon later, we were at the top. We did not wanted to ski the face that we came up from. Our second option, even though it was around the 30º, was exposed to the sun. 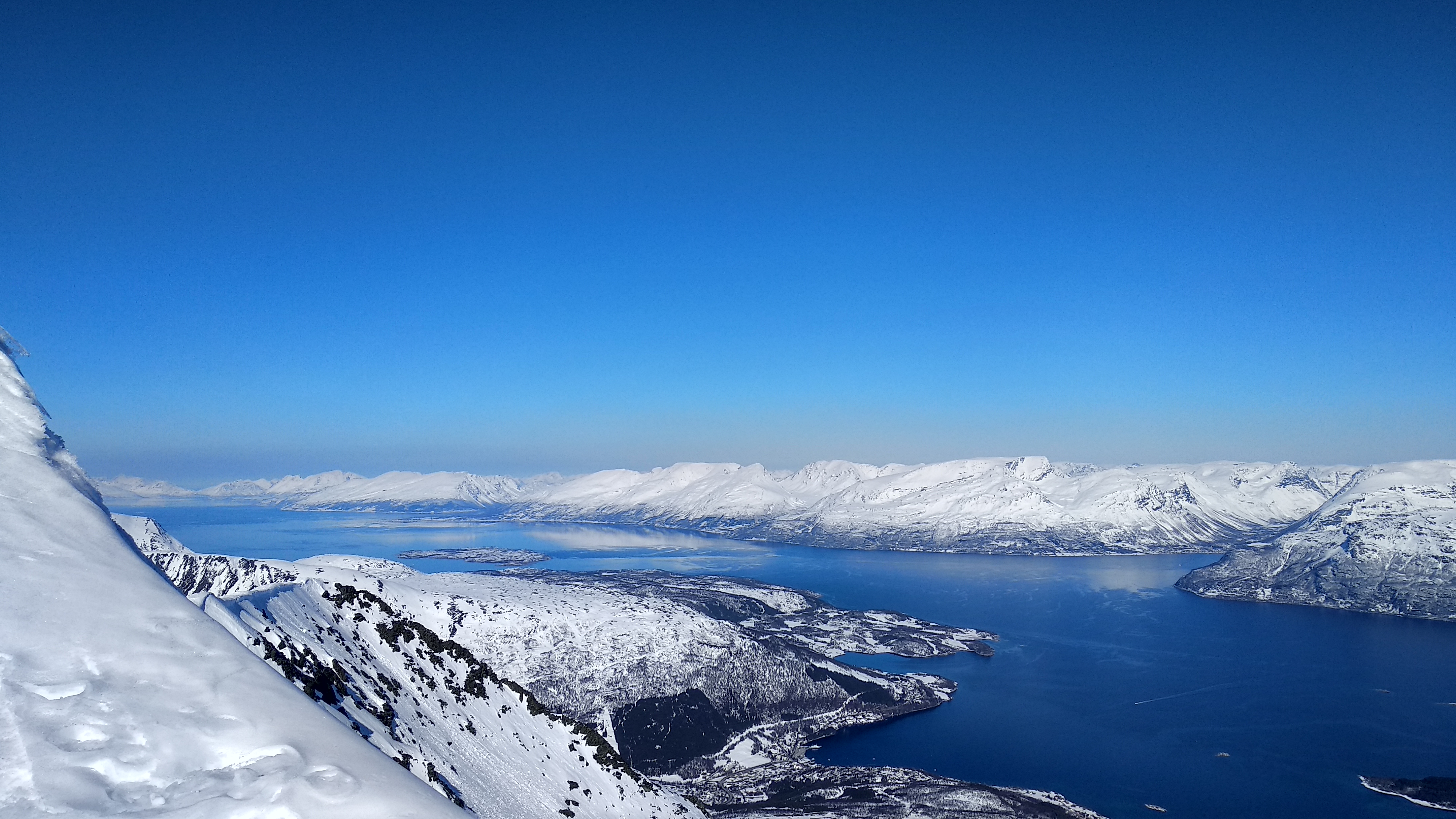 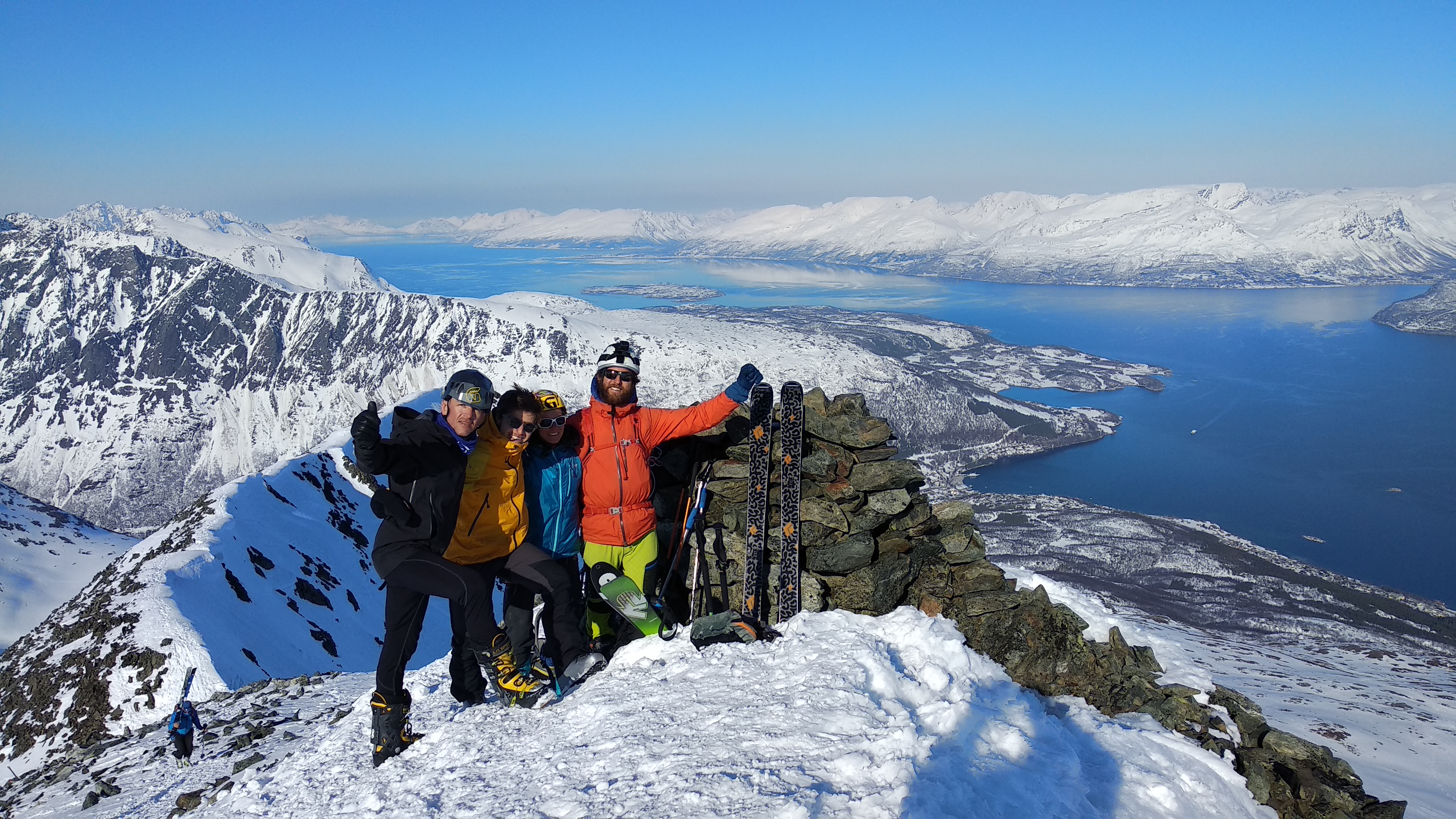 We decided to go for that run, Aniek went first, the snow seemed on point and surprisingly glidy after a few turns. I went after her and as soon as I hit the good snow, I triggered a spring slab. It started small and slow, but ended up having a considerable size. By the time I noticed it, I was far from it, going way faster and in a diferent trayectory. Well, still it lets you a bitter taste in the back of your mouth. From down there, we found an even shorter, more mellow, less exposed to the sun and overall safer way down for Pedro that we couldn’t manage to see from the top.

That little episode made us conclude that Lyngen is famous for its mountains full of alpine terrain close to the ocean, however it’s actually quite complex terrain; there are nasty glaciers around and it felt a bit like if conditions are good, the terrain can be excellent, but otherwise the options are not plenty. It was creepy to see really big groups venturing one after each other into some terrains. Anyway, we sure had enough of our Lyngen ski experience and decided to drive to the northern part of the peninsula, close to where Aniek was working to have a last night camp together. 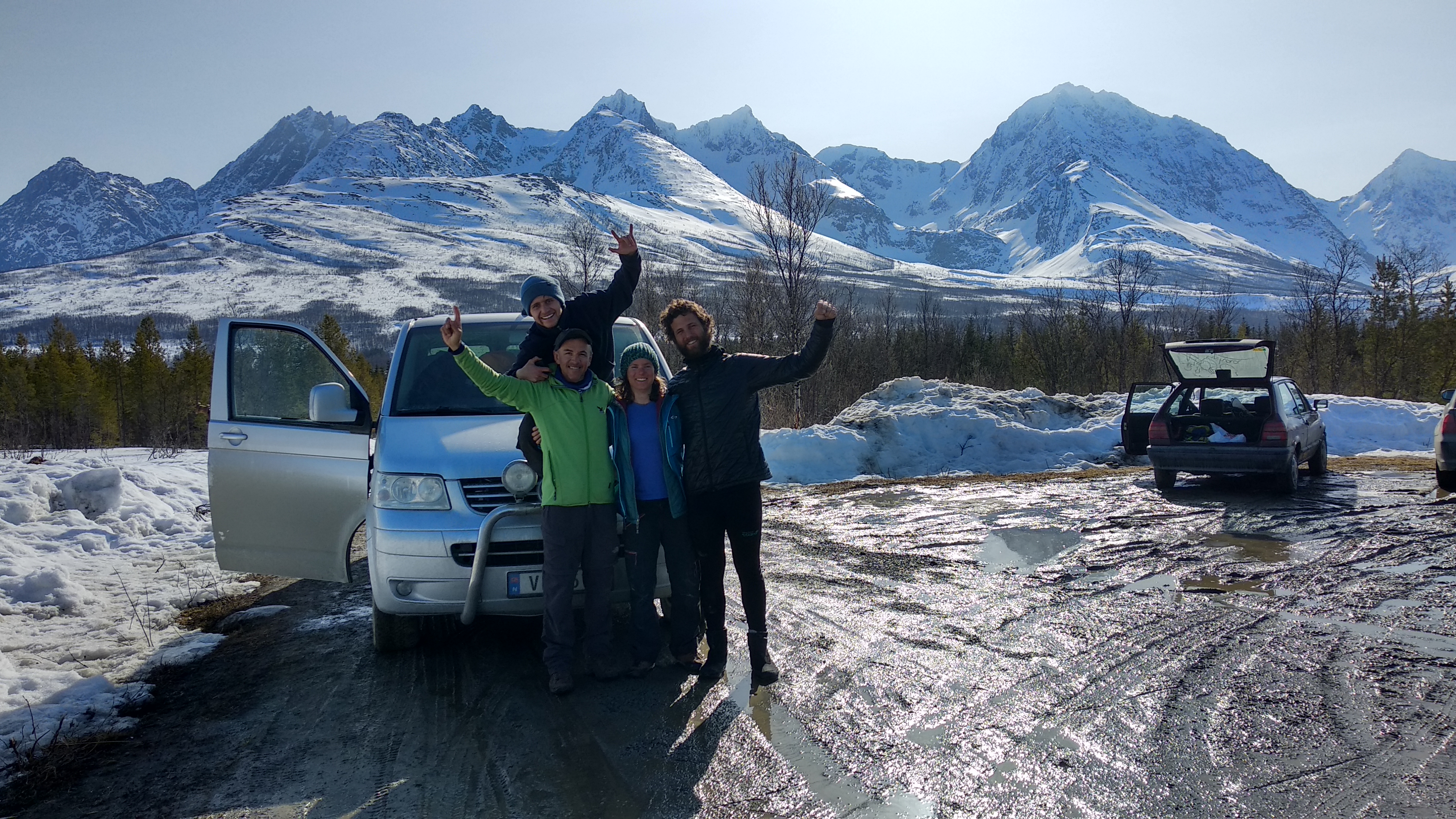 We spent the night by the Jaeger lake and the view couldn’t be any better. That felt like a proper way to say goodbye to Aniek, Lyngen and our ski trip in Troms. The following morning we took it extremely easy and just did a little road trip back to Tromsø. We cleaned the van, did some packing, booked a night, got a well deserved shower, hit town for a few beers and got ready for our flight back home. Still we took a moment to drive back where it all begun, my favorite spot in Tromsø. Worthy.