Ranero is one of those places that you just don’t go climbing, but to do tough alpinism on rock shoes, at least that’s what I had heard of this place. My friend Carlos and I we were seeking to disconnect from all this skiing and do the first multipitch of the season, he proposed a route called In Decrescendo in Ranero.

I must point out one thing from Carlos, he has already climbed most of the tough trad routes in the north of Spain, so every time he proposes me something I feel like: “oh god, that must be one of the few left that he hasn’t done, probably because no one wanted to go there before…”

I started to read through what I could find and everything pointed Ranero as a place for the rad: brutal walls of compact limestone, overhanging dihedrals, off-widths, 7b+ routes on gear…a true laboratory of alpinism and not really the kind of bolt-friendly place. Most of the routes are on the high sixth grade, but they are a few on the lower sixth, among them In decrescendo. I have to admit that I wasn’t so convinced of starting the season there. Right now we are more of a bunch of skiers, we can feel that crimping doesn’t lock as it used to and footwork is not really biting like it did on the fall. However, after studying the topo, it felt like the route was going through a pretty grassy spur in a spot where the wall seemed more friendly, less vertical and with some balconies. It felt like we would have to do fine climbing on the 6+ and 6a sections, but as the name suggests, it should only get better past that and hopefully it would be the typical alpine scrambling-ish pitches. Well, that’s what I felt like believing anyway, so ready, steady, go! Ranero is at the end of the Carranza valley on the border with Cantabria. We drove the A8 to Colindres, and there we took the national road towards Ramales de la Victoria (another climbing mecca worth checking). Just before entering Ramales you must take a left turn towards Carranza. Soon you’ll see the impressive wall on your left hand side. We parked on the famous Pozalagua caves, and did a diagonal crossing of the hill following a goat path till the base of the wall.

The valley is worth checking just for it’s landscapes and views. The pico San Vicente dominates the valley, on the distance we could see the snowy peaks of the border with Burgos, the atlantic ocean and the bay of Santoña. 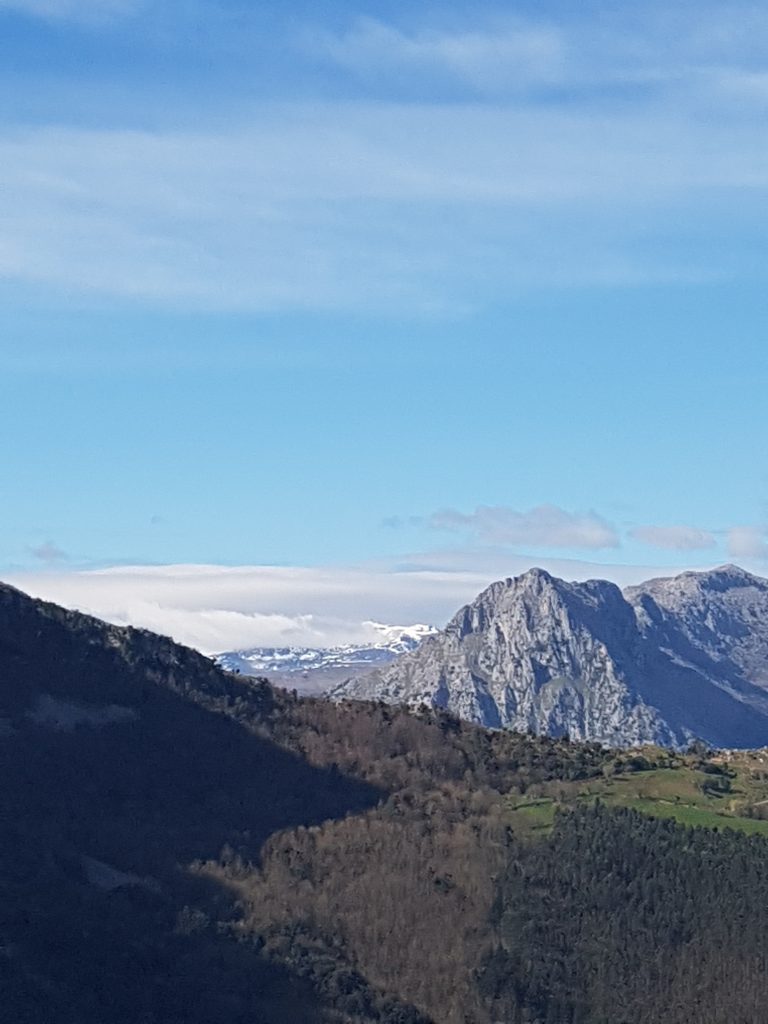 Ok, enough with the view, time to climb!

ONTHEBELAY  First ascent to an unclimbed wall in Norway (220m ; 6b). 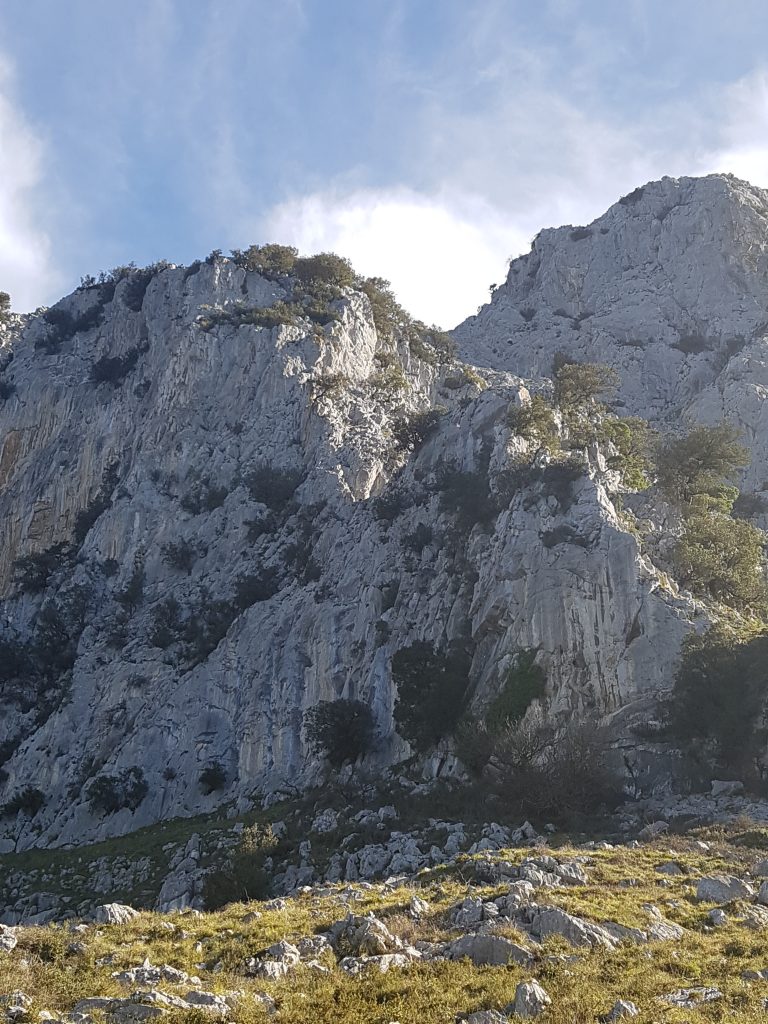 It’s not that hard to find the route. First you pass under a very compact wall, then you can see another similar wall a bit further and in between there is a sort of half grassy, half rocky couloir. On the left hand side of it there is a spur with some vegetation. The route goes on that spur. Continue on the base of the spur all the way towards the left and soon you’ll see the first cordelette, a few pythons and the two parabolts.

Well, here is where my battle plan starts to fail. It looks steep! L1 6a+. Carlos takes the lead, it looks like it will be a little struggle but we should tackle it fast with two pythons and two parabolts, then the route should slowly get softer. Well, it’s not really like that. Carlos leads slow and steady, it’s not obvious to find the sequences and you must climb technical. You have to earn that first parabolt. From there on, there are a few moves that needs commitment and overall keep climbing well.

The first belay is comfortable on a proper terrace on a big tree. Even on the follow I reach the belay quite empty, so Carlos decides to get the gear again and go for pitch two. 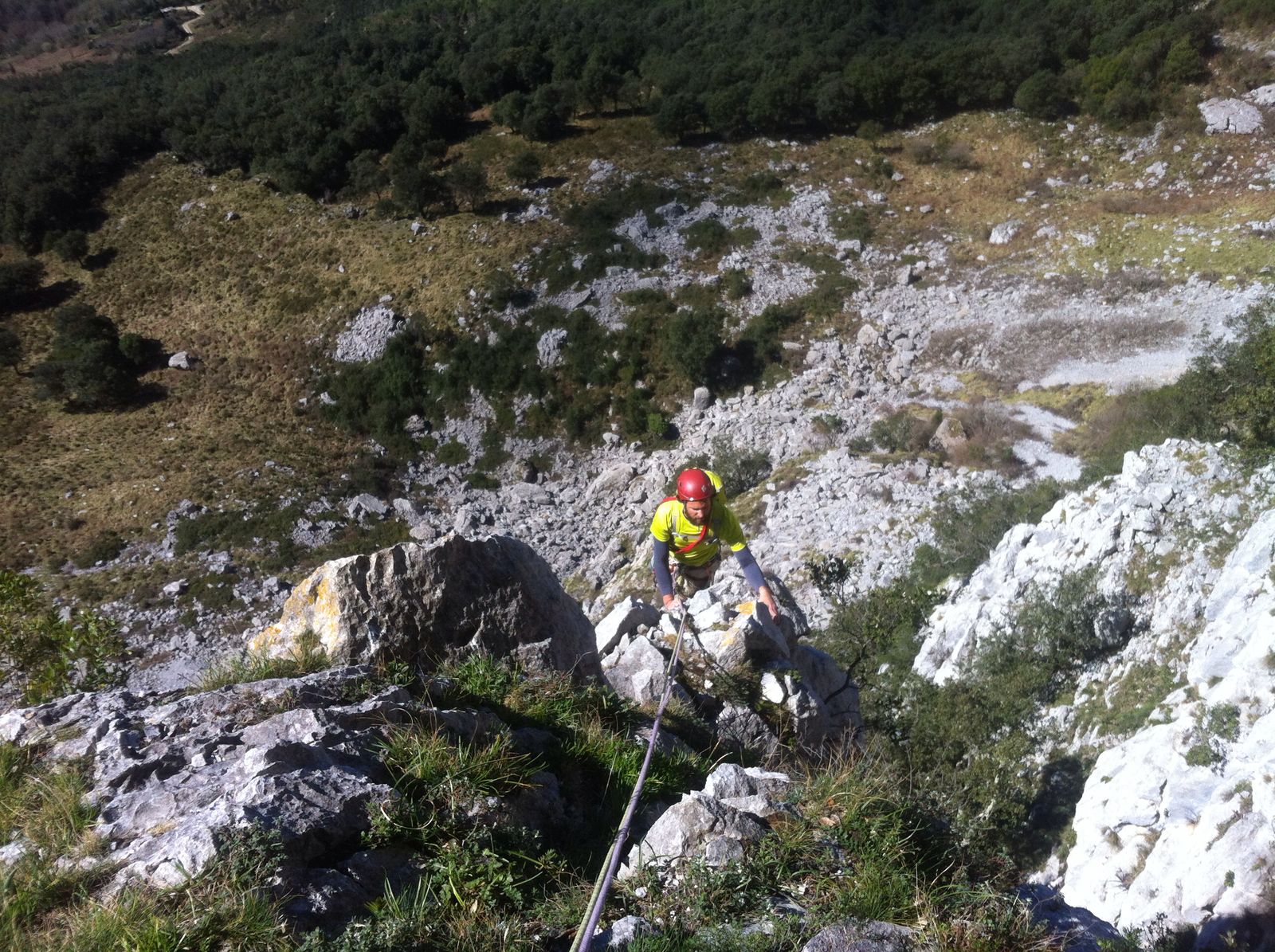 L2 6a. This is a tense pitch. As you are belaying under a few trees, you cannot really see all that well what’s happening up there. You have to climb on the arete of the wall, pretty soon the parabolt and the cordelette are left behind. The wall then takes a pronounced and sustained overhand that you must take on gear. There are not many options for protection, but at least towards the middle of the wall, there is a crack where we stuck two medium alien cams. Holds are generally good, but it’s not obvious to find them. Fine climbing is required. The most tense part is once that you are exiting the overhang towards the next balcony. You are still on the overhang, protection is now far and you are grabbing rocks that are more eroded. Check properly that you don’t grab a loose one. Soon after you’ll find the next belay. We don’t have good pictures from this pitch.

L3 6a. Ok finally it’s my time to lead. From all the beta that we had, this is the finest lead. 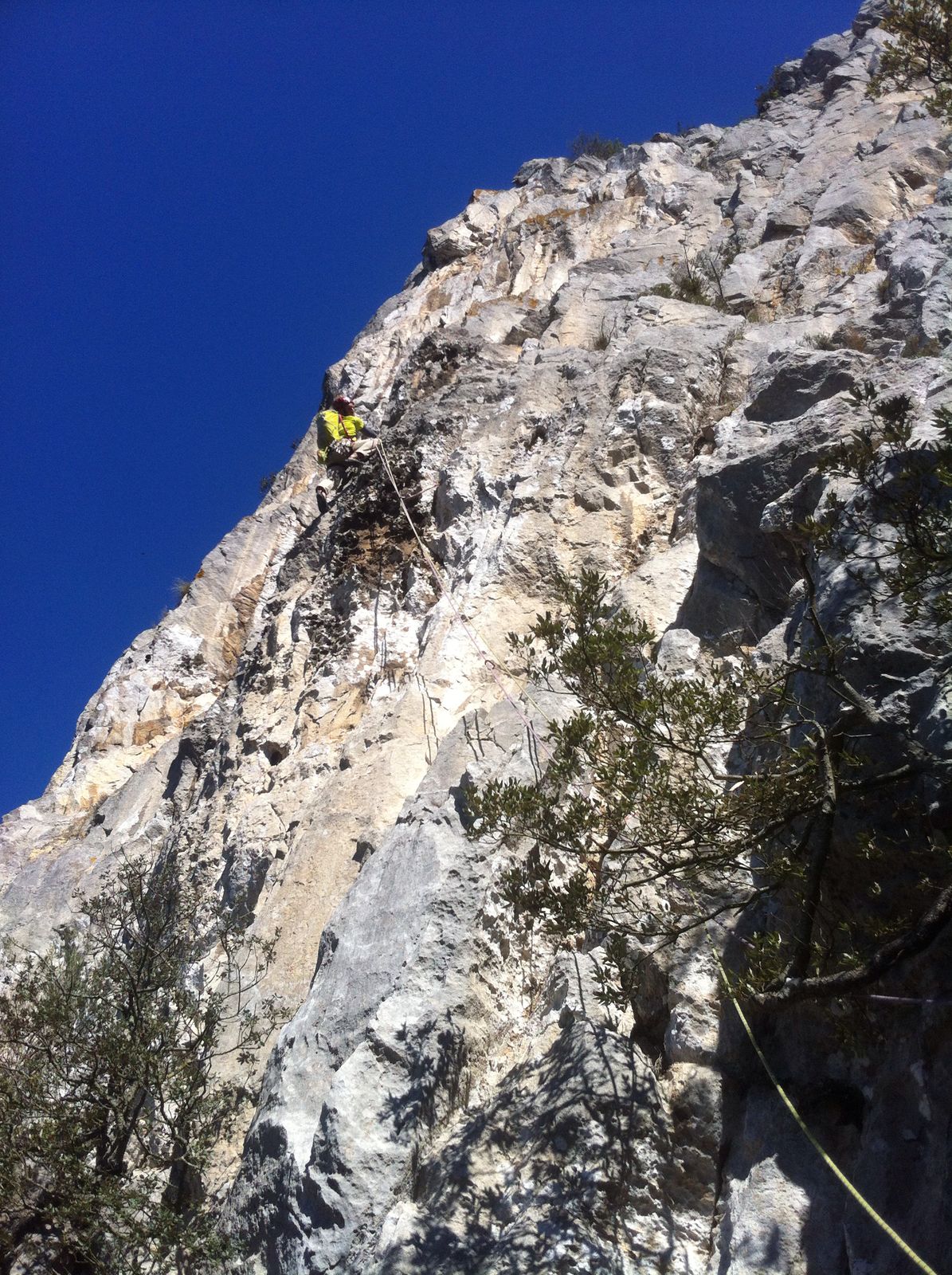 Starts doing a diagonal towards a black patch of rock on the left. The traverse can be protected with a little tree and a few cordelette loop over rocks. Once you get under the black patch the party starts. The wall takes a proper overhand where you can finally get a proper feeling of void, you are progressing on jugs and there are options for placing gear. The black stripe of rock is quite strange, feels like coral, but offer really funny holds and good jugs. There is a parabolt on the middle of it, so try to enjoy this particular climb. Towards the top of the overhang it’s quite a run off, but once you pass it, the limestone suddenly almost looks like granite and you can place some good pieces of gear. The belay is right there, at the base of the next wall. 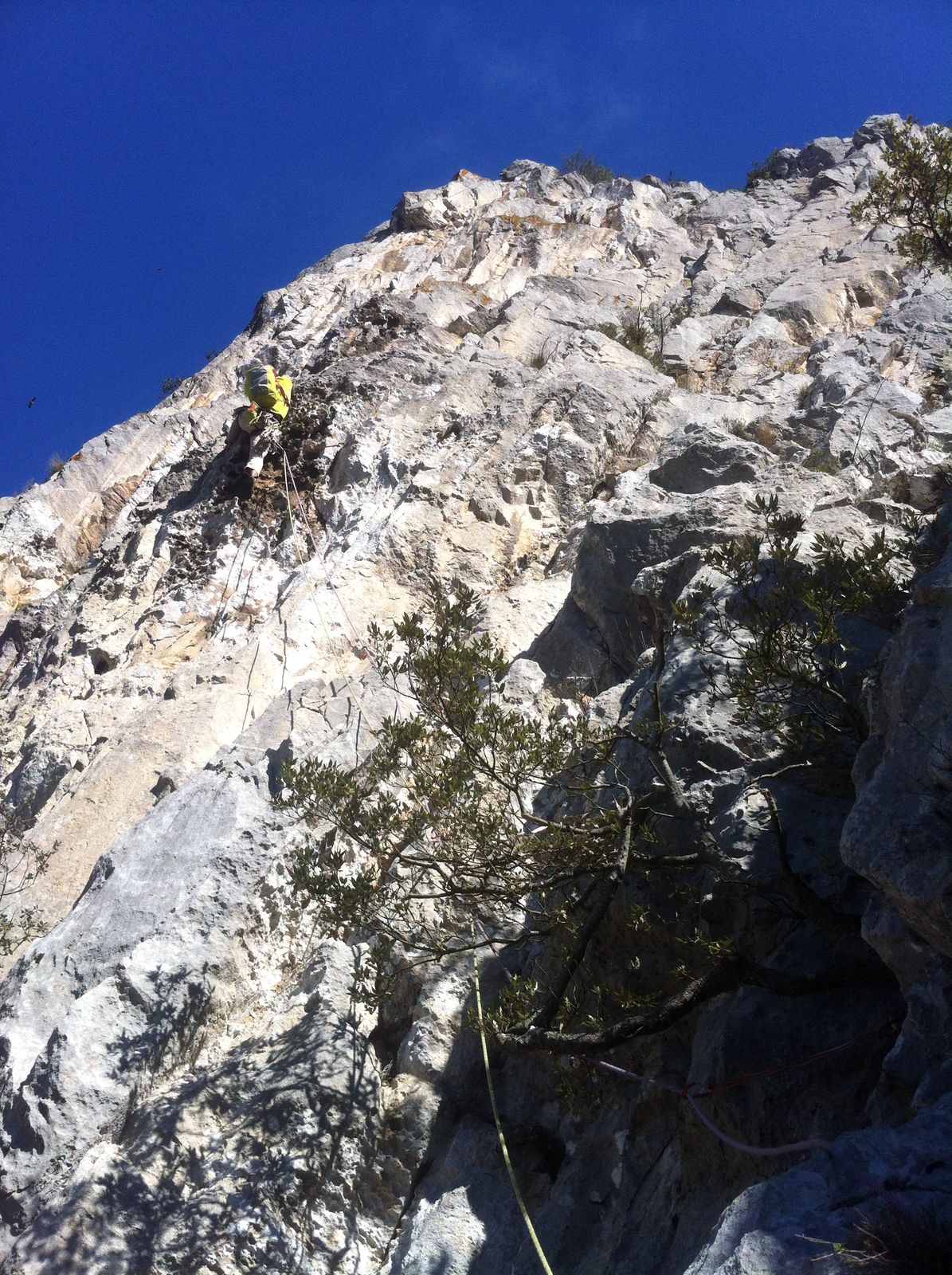 L4 V+. This one goes for Carlos and finally we are in the kingdom of the V+. You must follow a dihedral that offers good protection at the beginning, but of course it doesn’t take long before it becomes overhanging over a sequence not that easy to protect where you must bring up your footwork. Doesn’t really sound like V+ right? 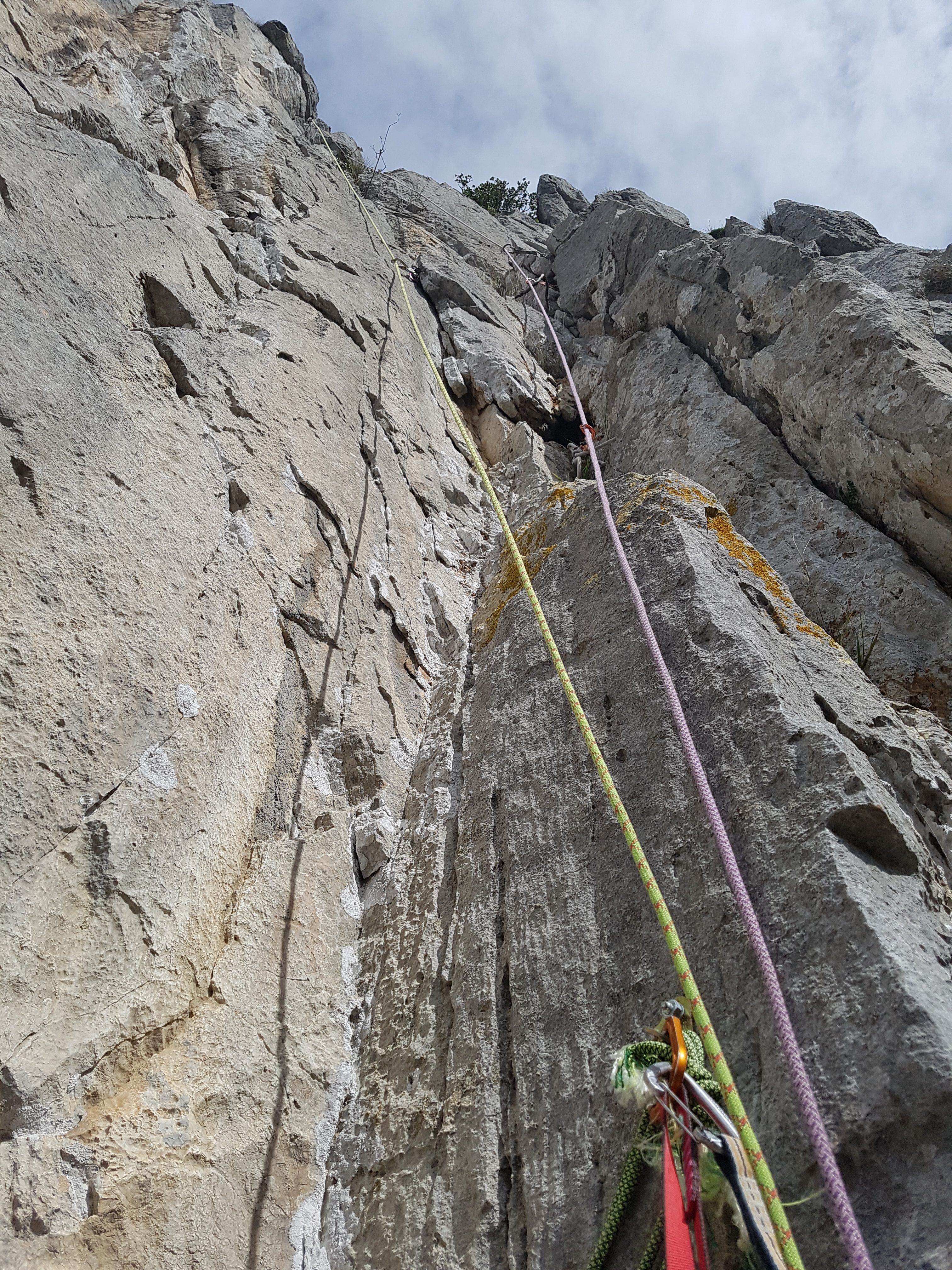 Again I reached the top of this pitch quite exhausted, even though the last meters become a bit easier, but at that point I was almost getting crimps in my biceps. Well, well, ski boy…The belay is really comfortable on a wide balcony with some trees. We could see that the wall was almost over, and it just seemed a not so difficult wide crack. I ask Carlos for a little time off to go through some snacks and a bit of laziness before I take the last lead, but as the sky was closing down and he had to drive all the way to the Pyrenees again, he decides to take the gear and go for it.

L5 V+. Well, what seemed a pretty easy pitch, required some not so easy climbing again, and quite some hand jamming. 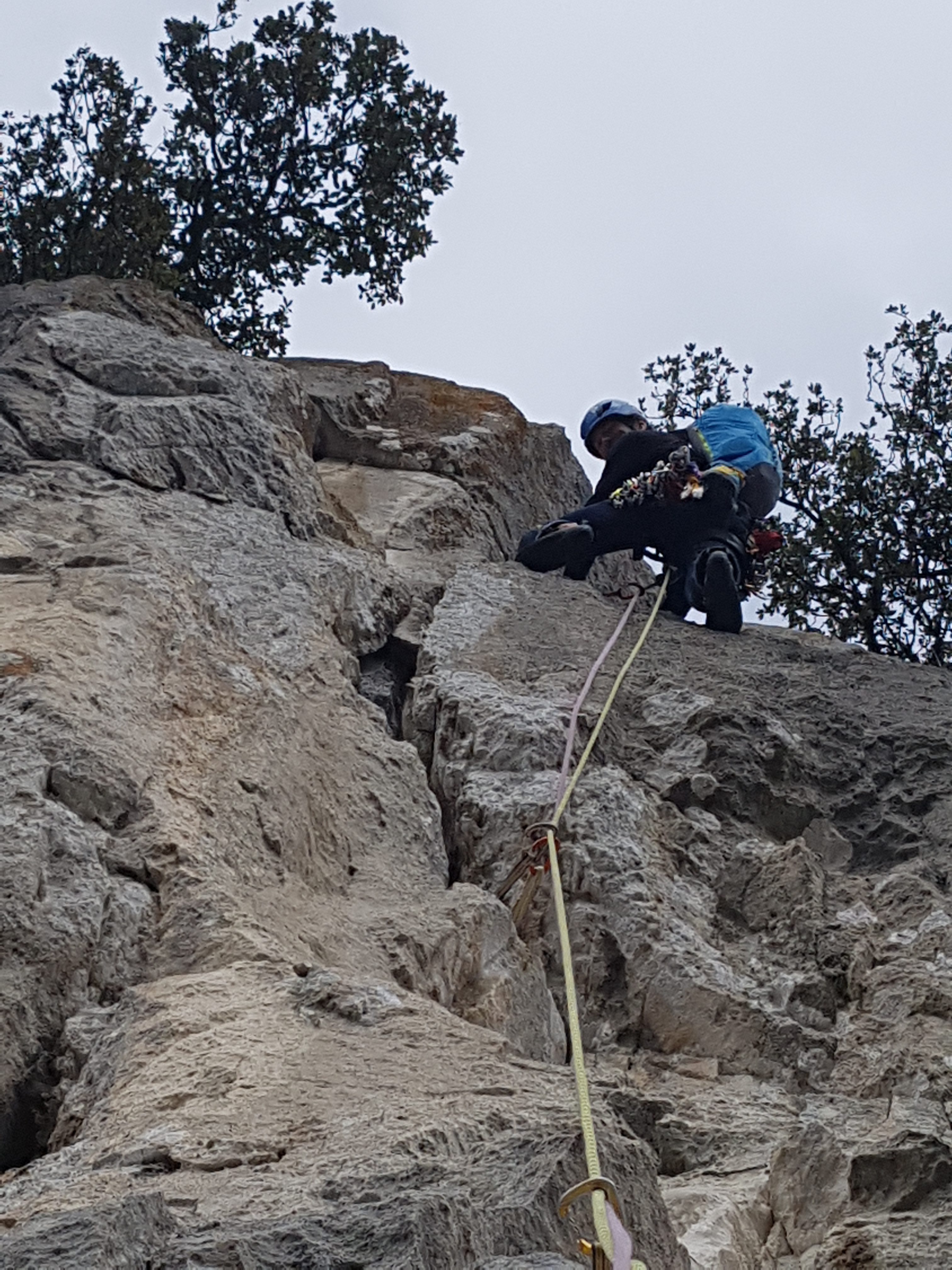 For summing up, don’t get tricked with the name In Decrescendo, it’s a really sustained route for the grade that you must climb extremely fine at every pitch and almost every move. It’s impressive all those crazy sequences through aesthetic overhanging dihedral and walls.

The limestone has a really good quality on the climbing parts, but on the transitions there are loose rocks, grass and vegetation that sometimes wants to keep your backpack or gear. However this happens quite often in this kind of limestone trad wall climbing. I wouldn’t recommend this place and this route to anyone that doesn’t already have a solid experience on limestone trad climbing around the 6b grade, but with some experience and tricks on the book, this is really a place worth checking.