After the whole week trying to fix the “menu”, changing the route several times, we decided to head into the Marimanha massif and overnight in the Airoto refuge.

We checked a few mountains, couloirs and possible descents, however we didn’t wanted to put a lot of pressure on timings and plans and we were most excited for reuniting the band. 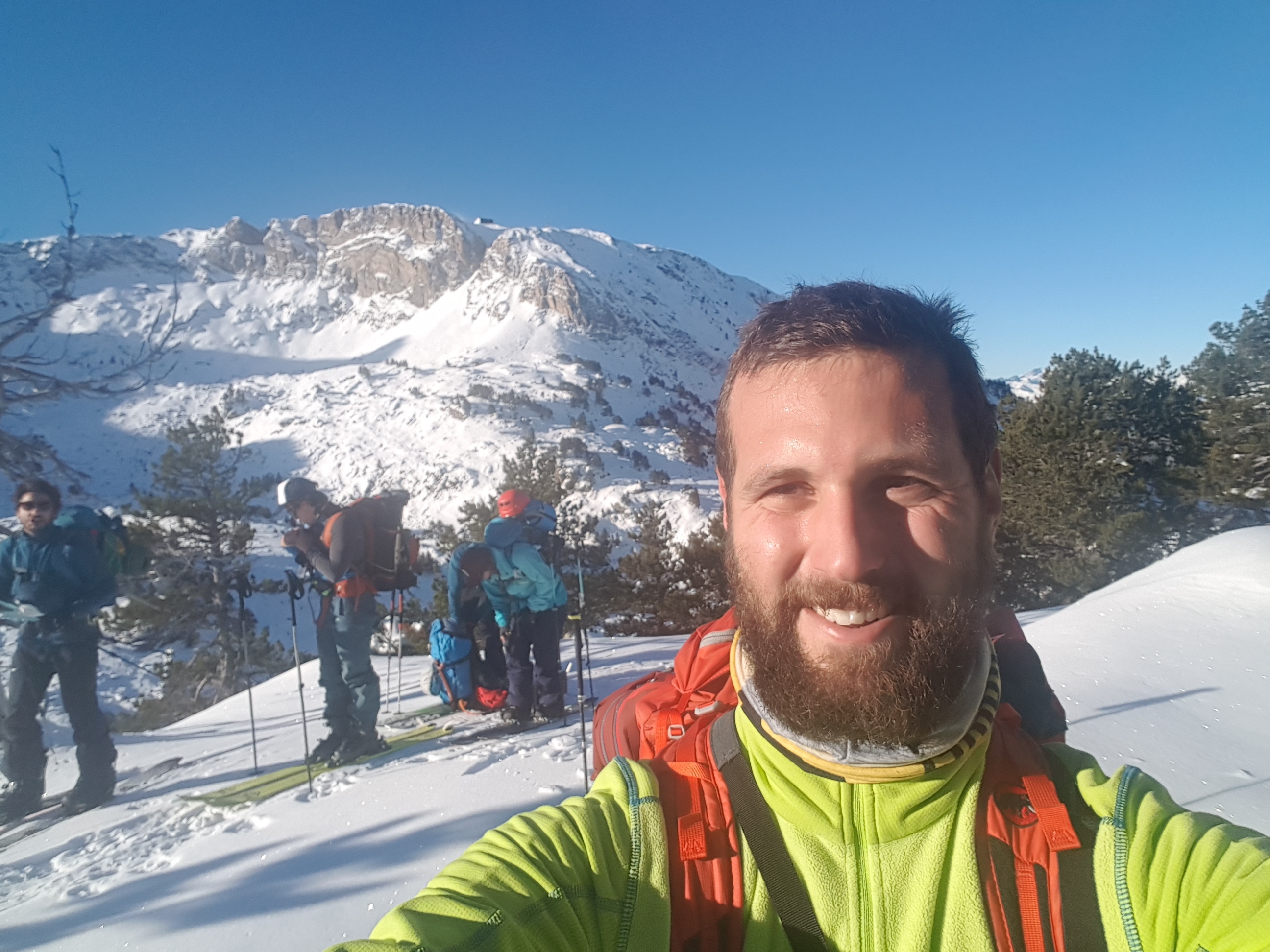 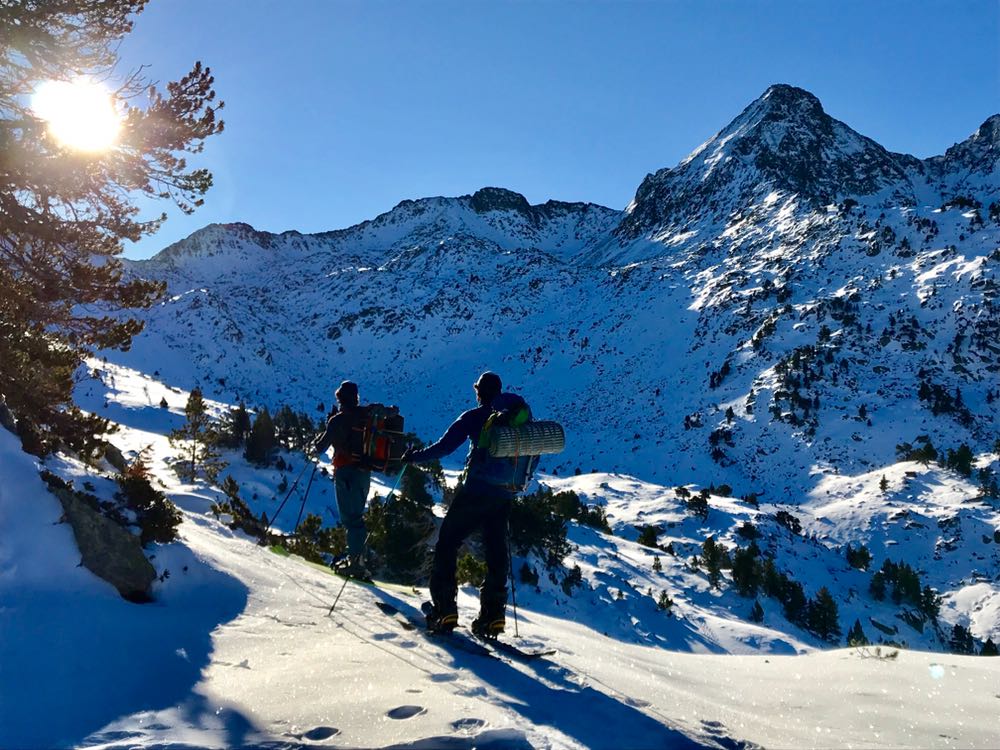 We start in the orri parking lot and head towards the circus closed by the Tuc de Baqueira and the Tuc de Baciver from the left hand side of the river. The snow layer is quite icy, it’s what we expected, but it feels that in some areas we are finding enough depth of fresh snow as to may be enjoy some good turns. Psyche is high. 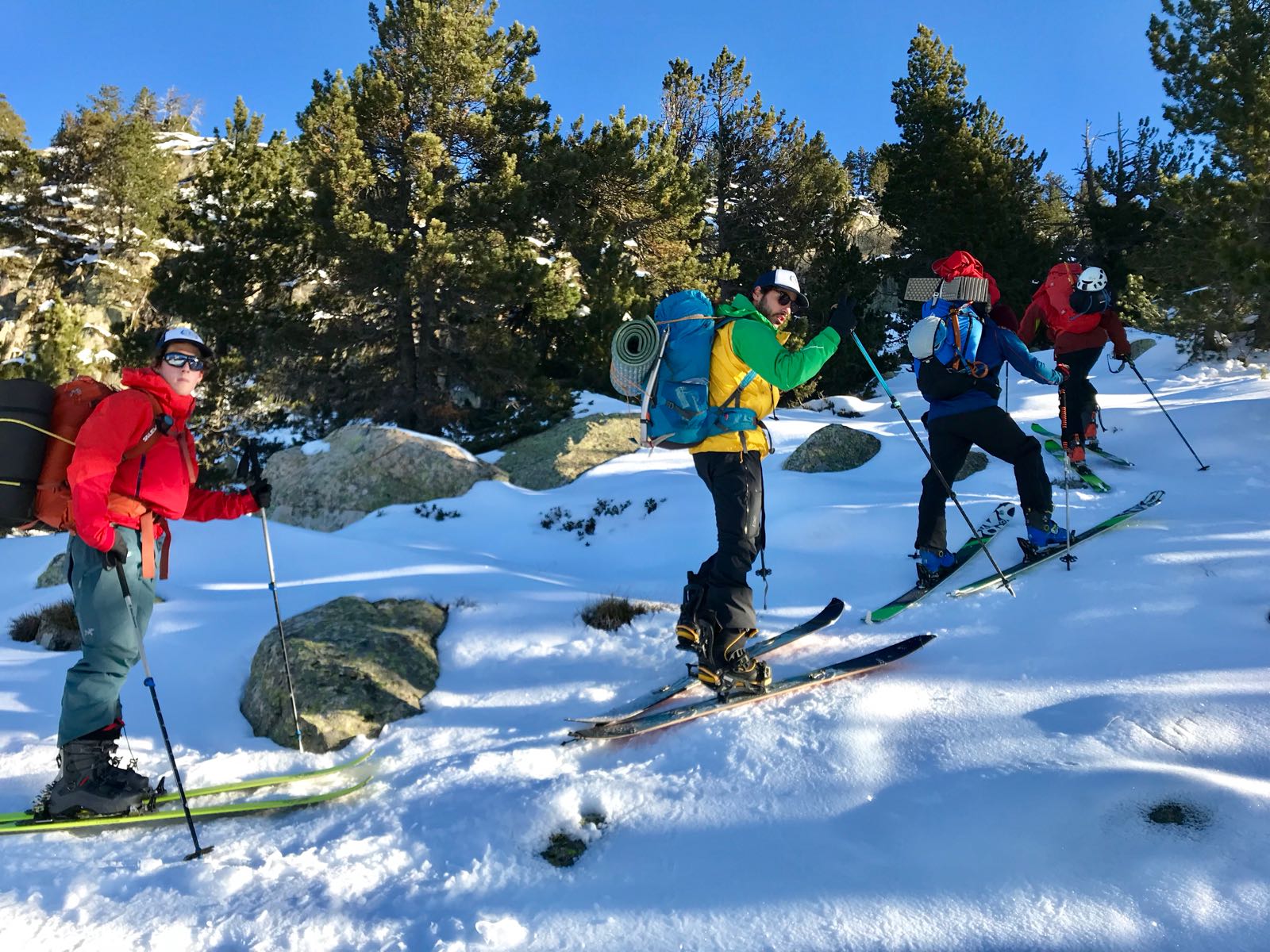 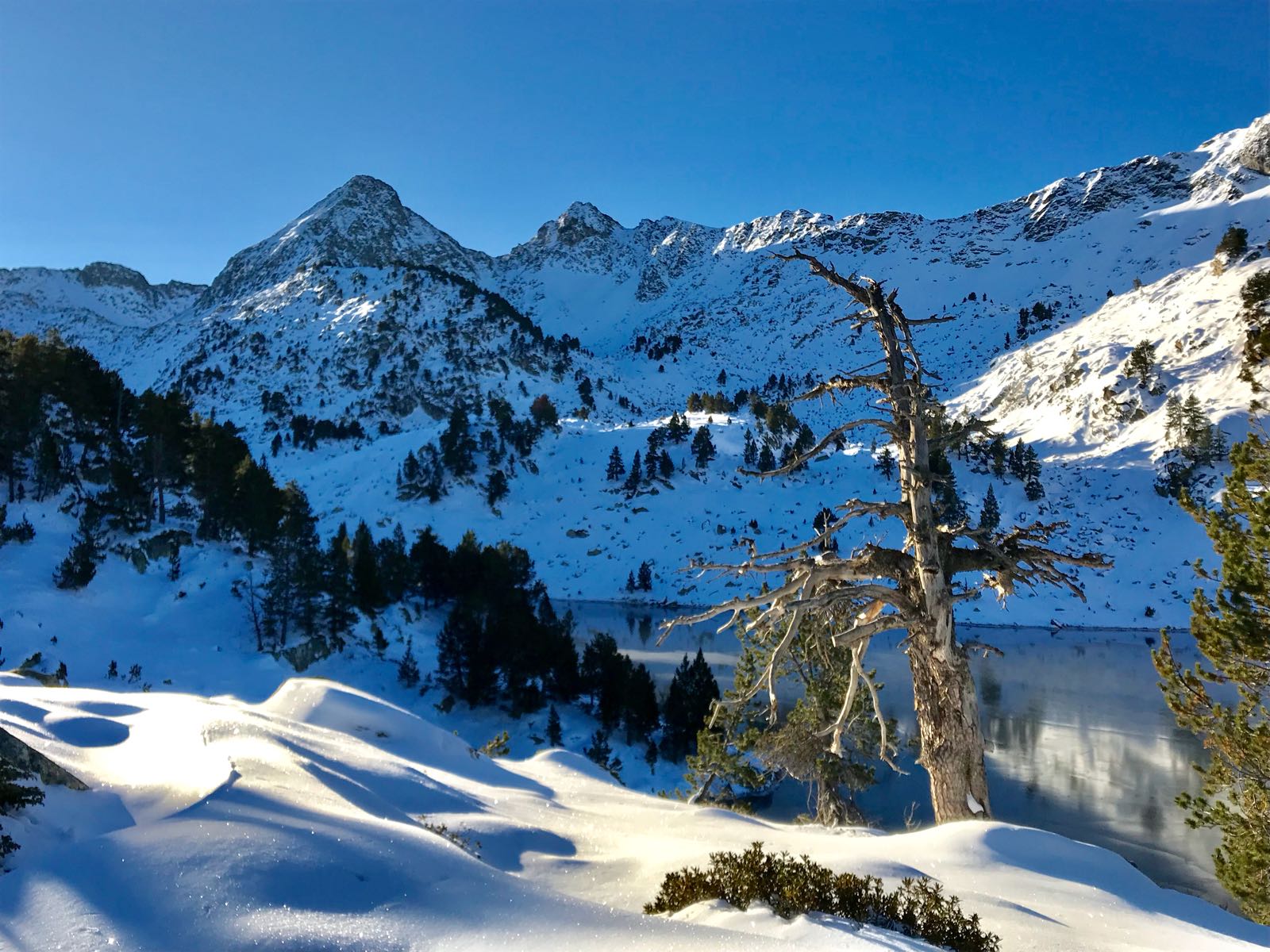 As expected, we thought we could crack the code and take a few short cuts, but we end up messing things up and losing time and energy. Well, no big deal. Learning through pain. 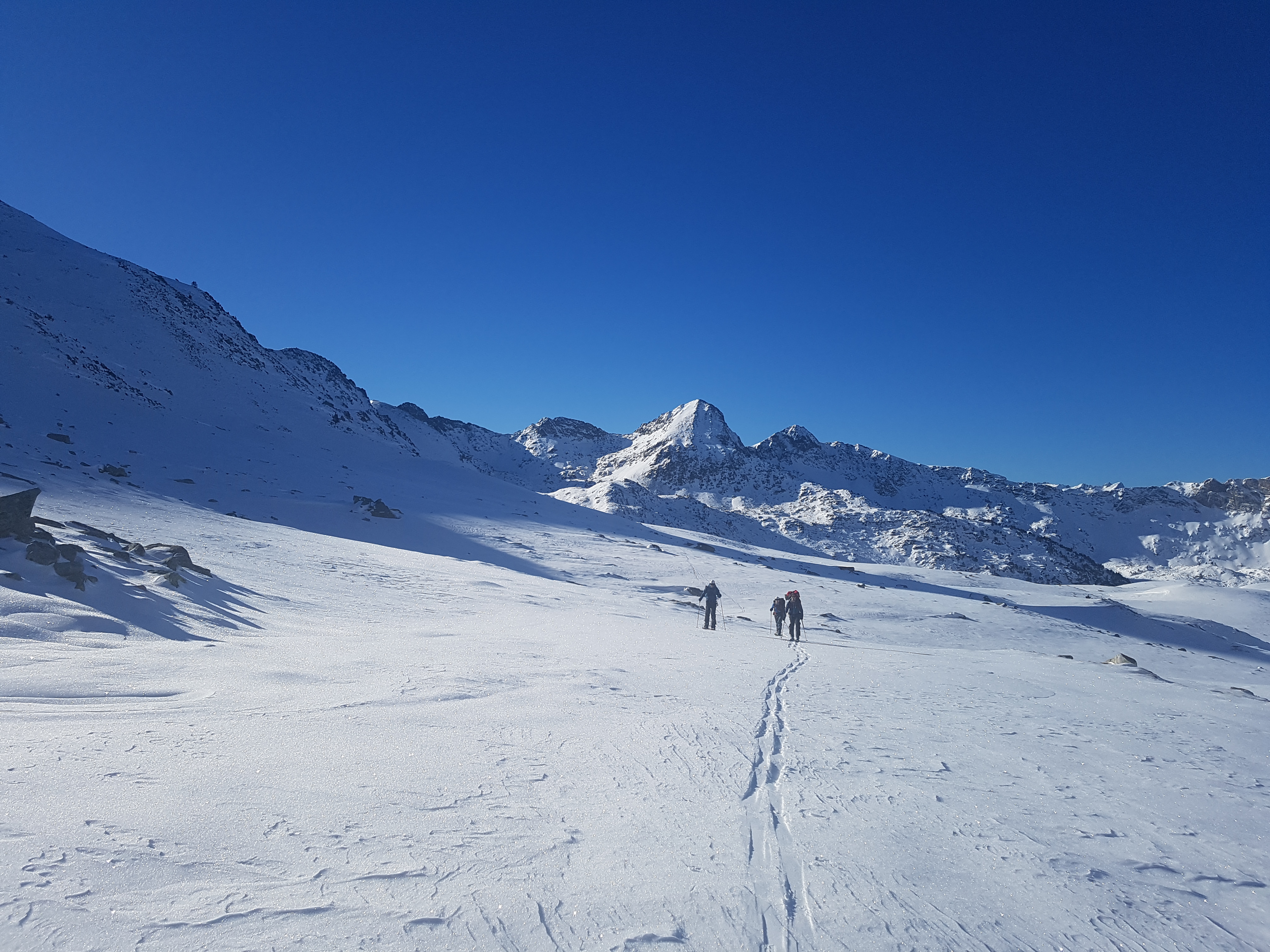 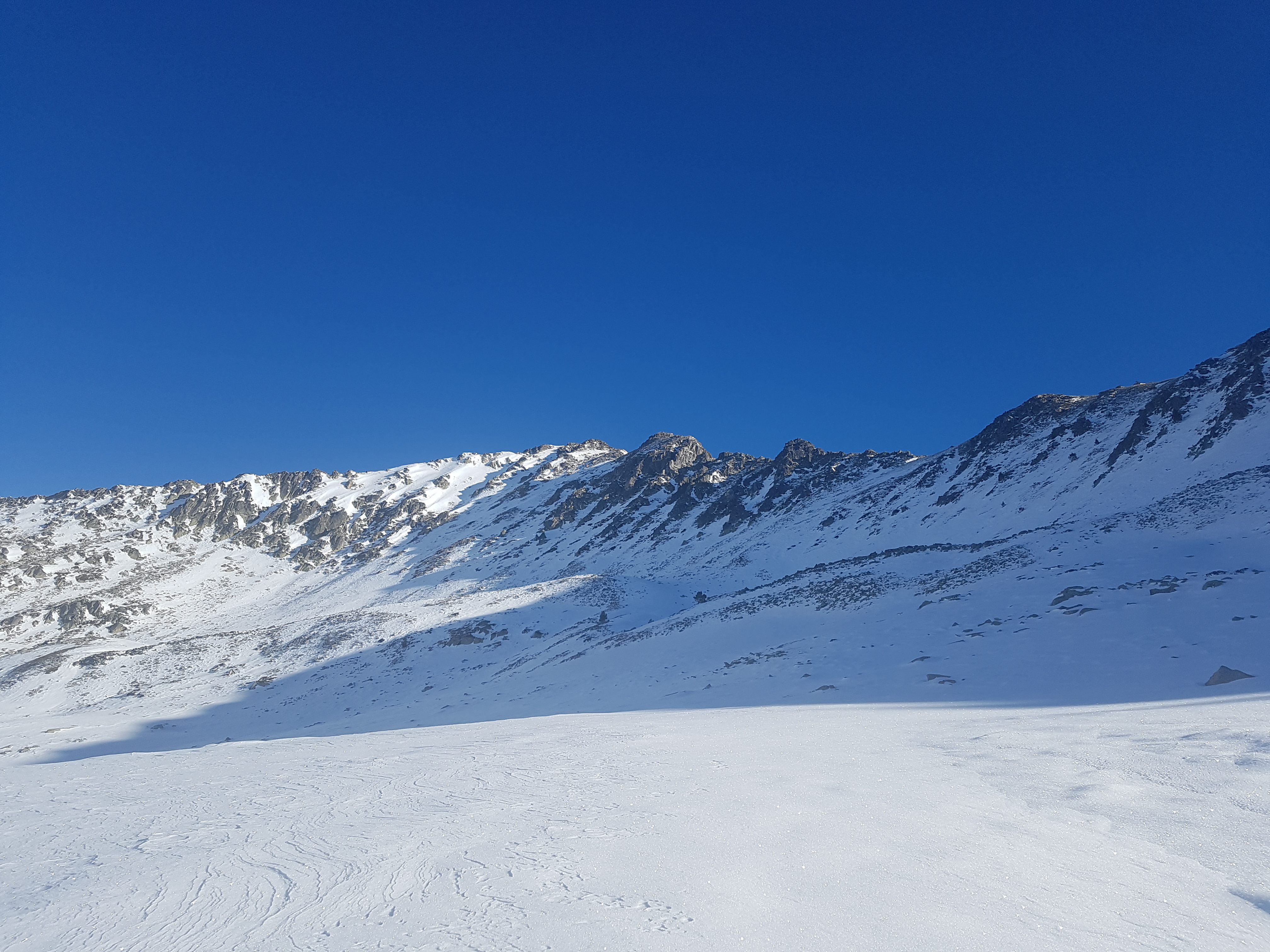 Towards 10.15 we are in front of the wall that closes the valley and we are trying to decide which of the two possible cols will be better. The one towards the right looks on right conditions as to skin it up while the one on the left is more vertical, dry and has loads of granite boulders popping up. Definitely we cannot skin it up and we must crampon it. We check again our gps, and considering how dry the whole wall looks, we decide that we would have better chances to ski down towards the other side properly from the left hand side.

Hence we have two options: Skinning up the easy col and crossing the whole ridge before starting the ski down, or take the cramponing through the left col and then ski straight down.

We decide to go with the second option. 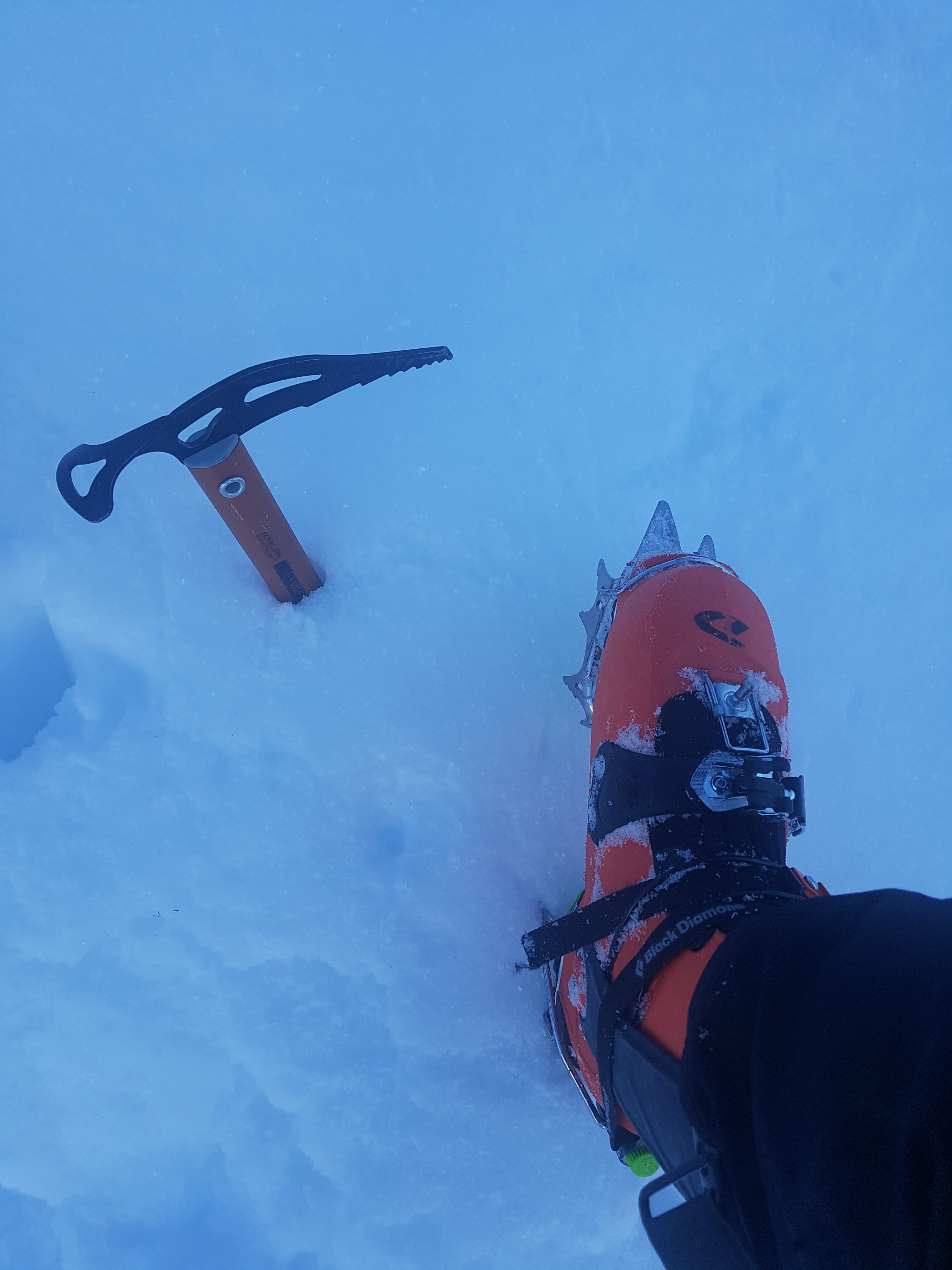 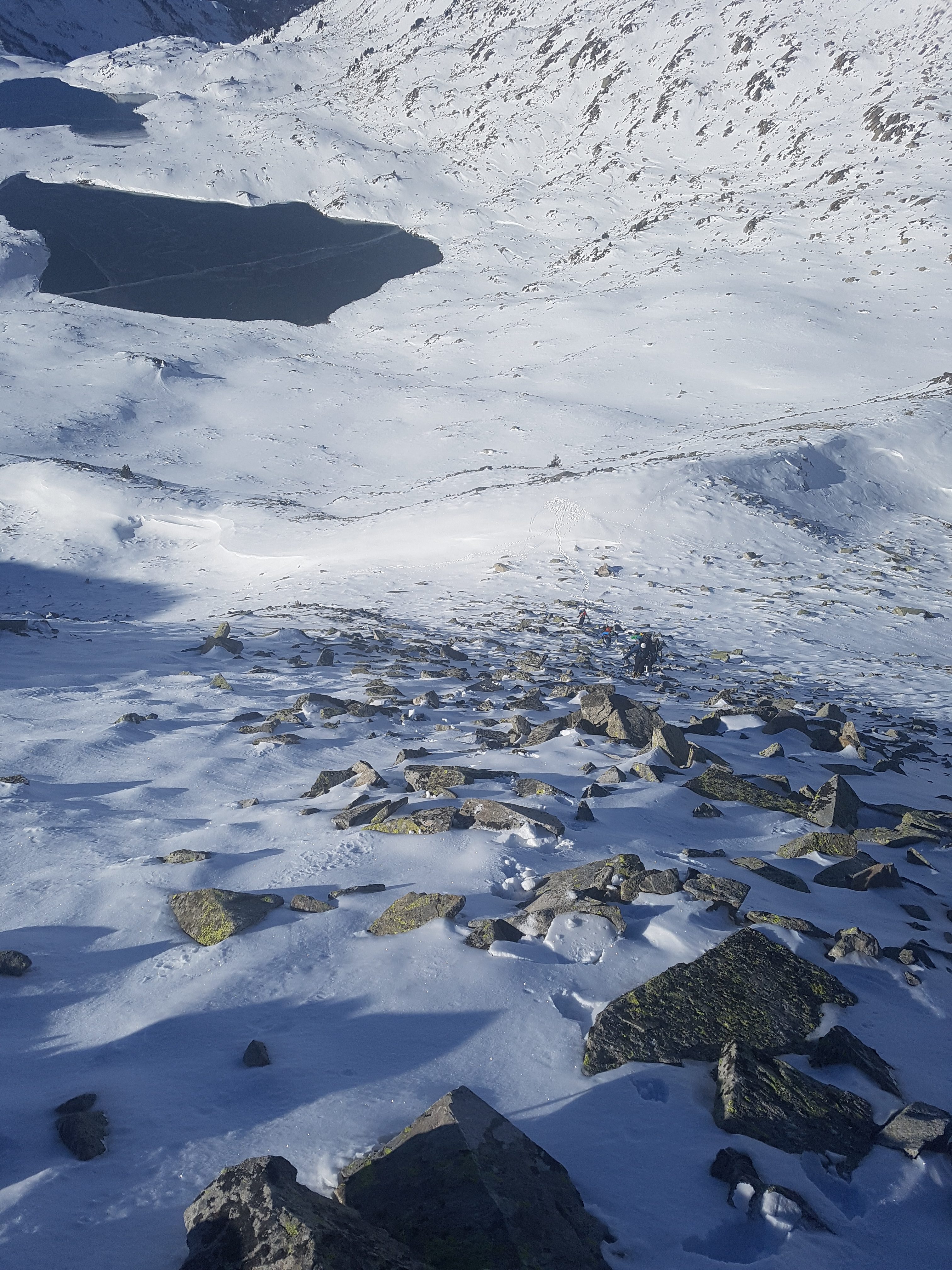 Crampons on and time to get in the mud. This was just painful. Snow was soft, we were sinking and we really had to aim for the icy patches and stepping over the rocks. If food for two days, the alpinism, sleeping and cooking gear was not enough, now we also have the skis in our backpacks. Was it the correct choice? we don’t even want to talk about it. Now we are on top.

From the top of the col it looks very dry in the valley we are heading and we are starting to fear that they may not be enough snow for the descent. 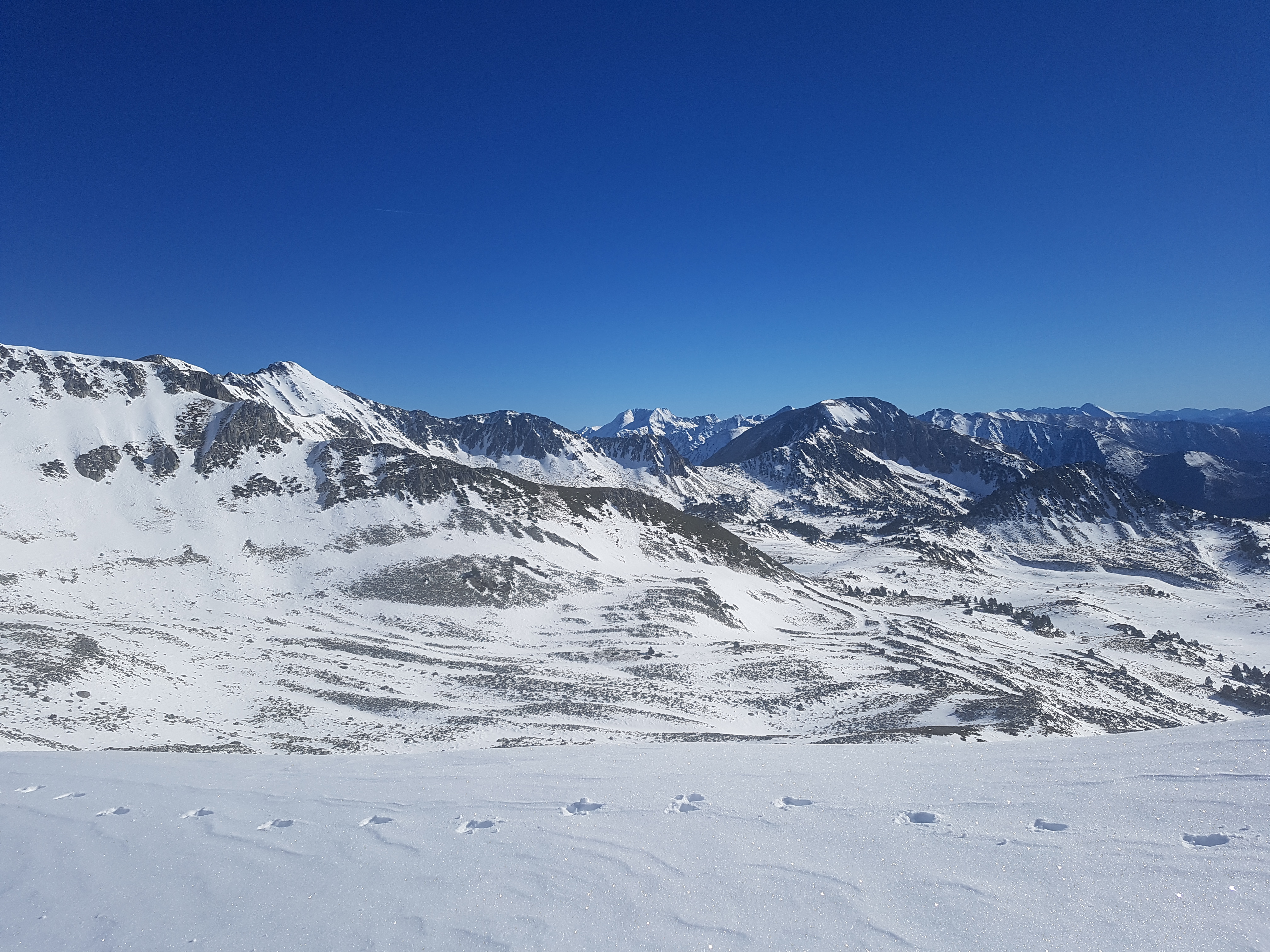 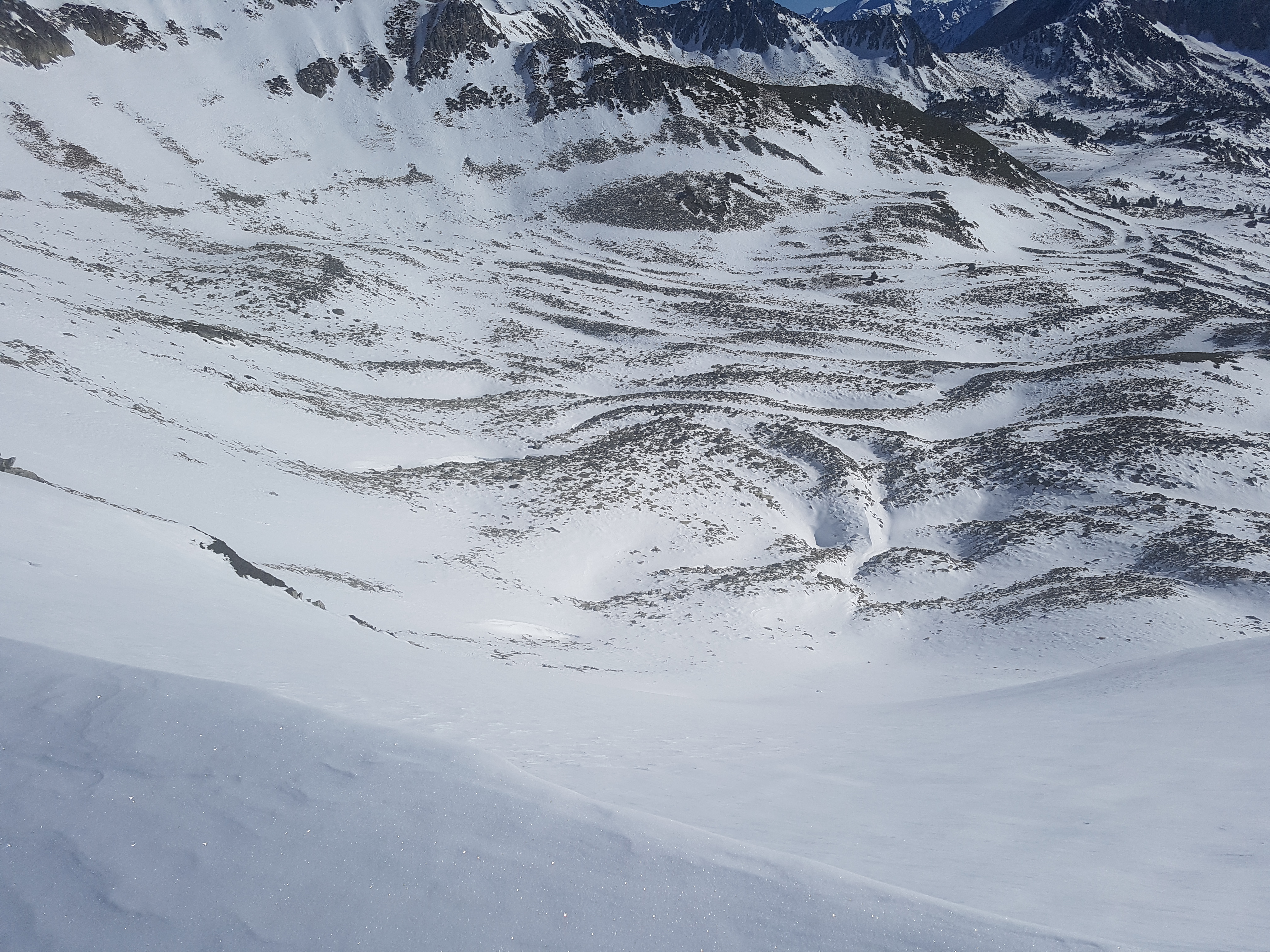 Before we can even start panicking, Diego climbs towards a view point and start to laugh and whistle. We all take a look and find out a slope properly charged of snow and it even looks like it can be fresh snow.

The base was hard, some turns were a bit nasty, but hell yeah, some other were pure pleasure spraying the white fluff out.

Once on the valley, we try to find the best way to cross it towards the refuge. We have a hint where it may be, but we are not completely sure. We take a high detour as to go on a more snowed line and we find the big lake. Now we know that the refuge is just on the opposite side of the lake, but that means that we need to take a detour. 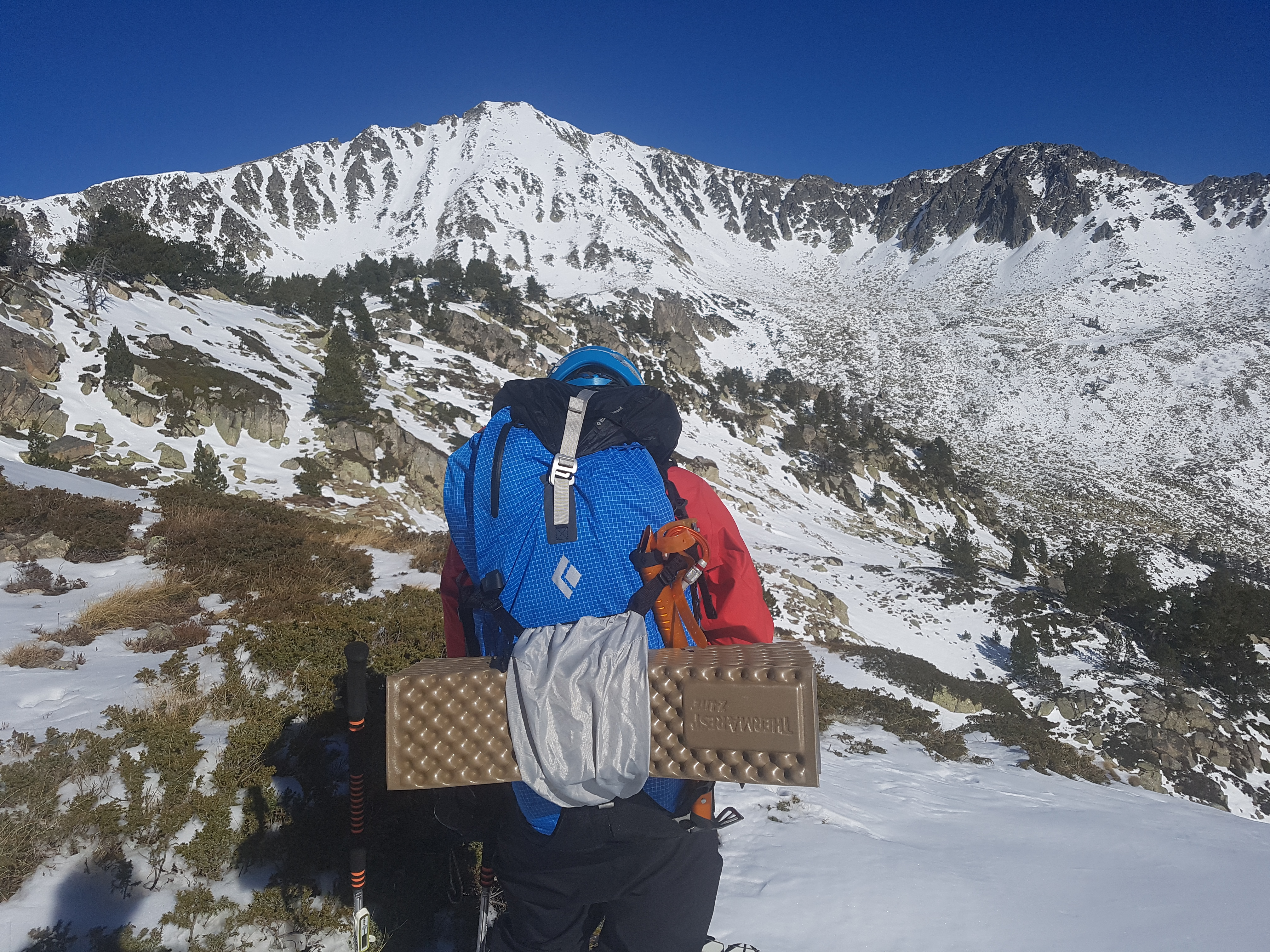 After a while we can finally see the orange roof. The valley is just amazing. Wild, balanced and granite pops everywhere. I get my eyes lost among all those spurs, corridors and ridges.

However, it’s quite dry, it definitely needs another proper snowfall.

Last descent on not so cool conditions, a bit of traversing and home, sweet home. 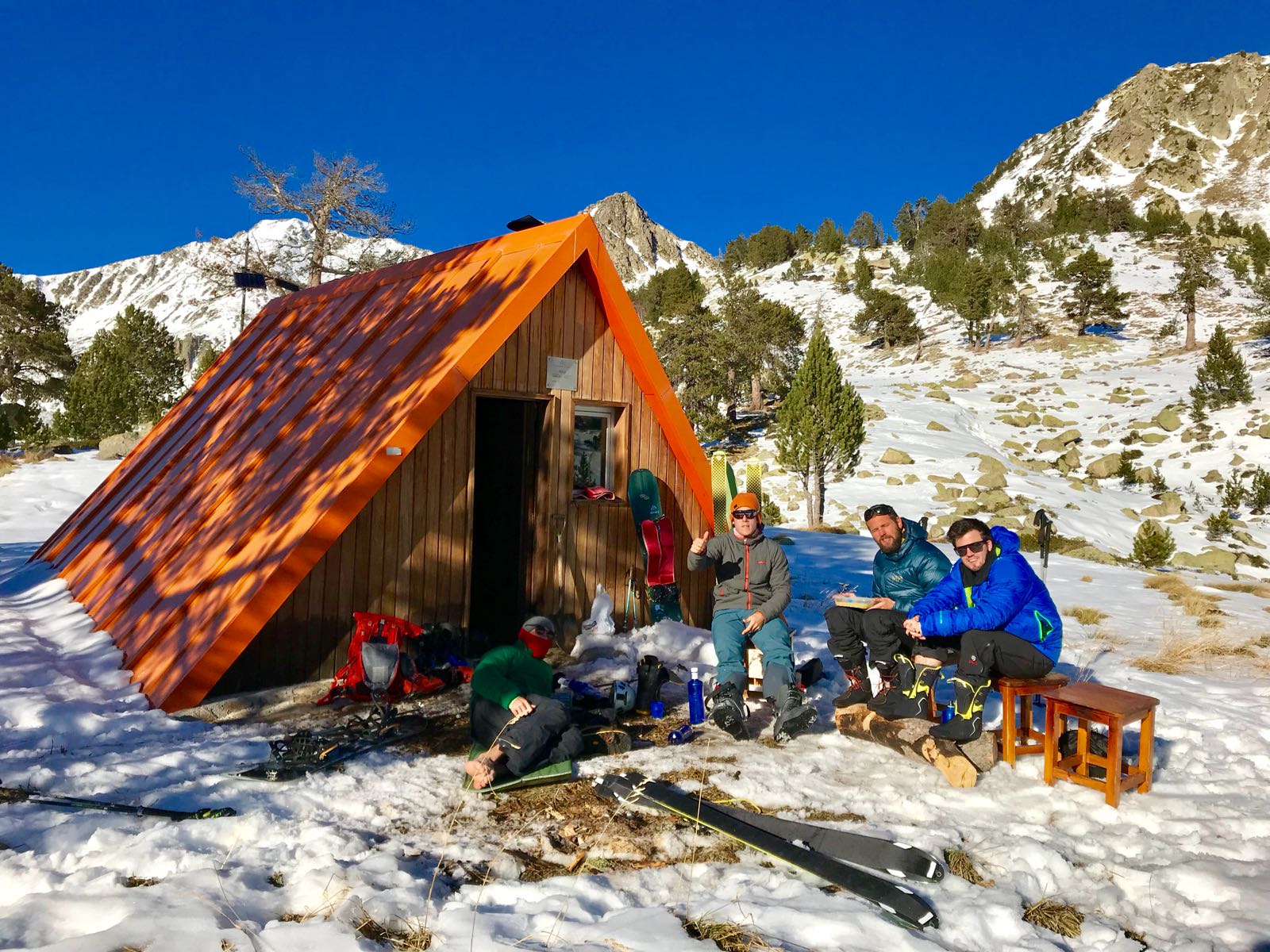 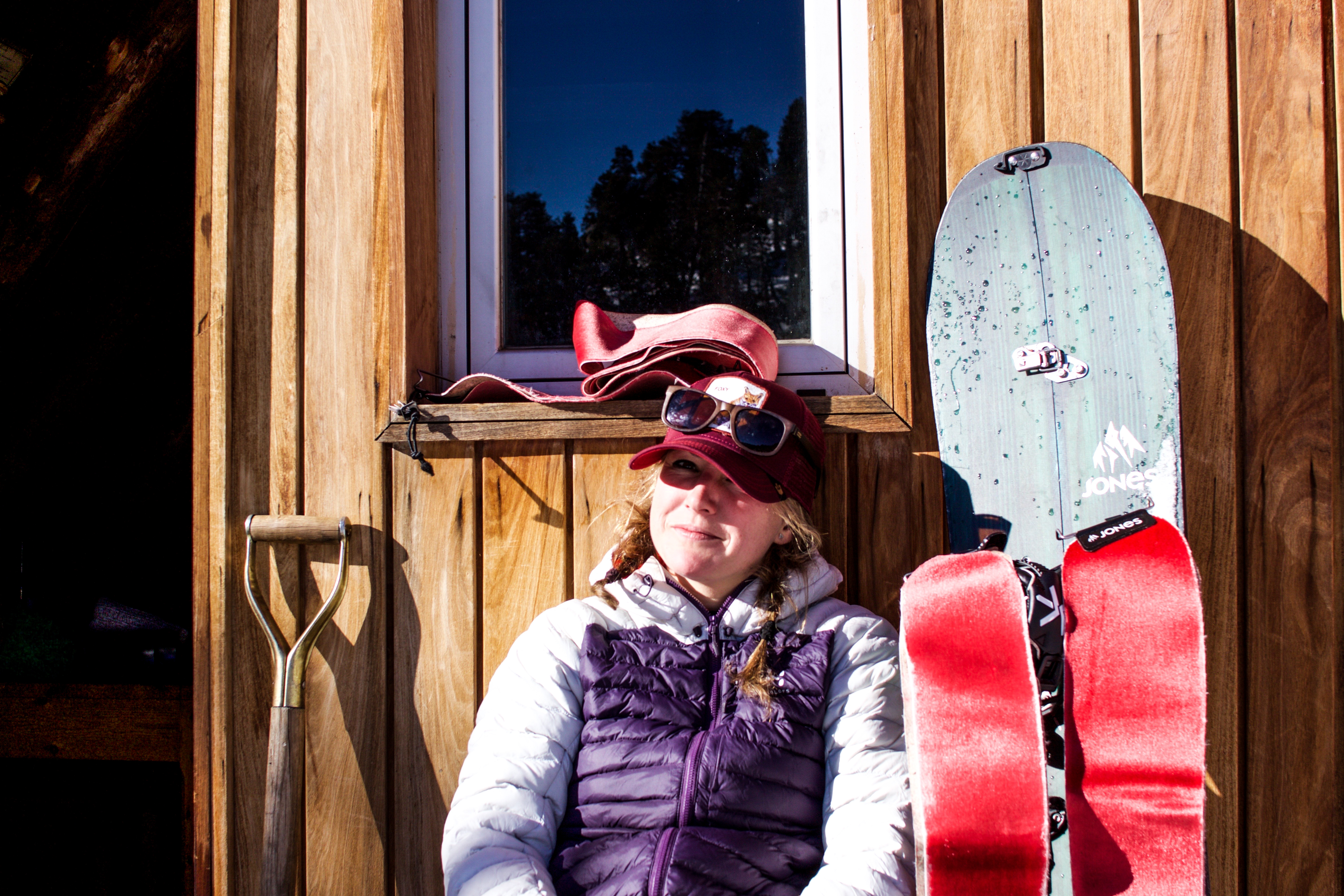 It’s around quarter to two, in our plan we were supposed to drop all the overnight stuff on the refuge and keep fast and light towards the tuc de Bonabé to check it’s couloirs; however, we decided to call it a day, sit in the sun, do some stretchings and get something to eat.

We were expecting a very basic refuge, but to our surprise it was equipped with a big table outside, fresh water source, solar panels, a fire stove, basic kitchen tools and pots, mattresses and blankets.

If we would have known we wouldn’t have brought half our houses in our back, but now it’s time to relax and enjoy the bandido lifestyle.

The evening flew away, basically due to the two hour siesta as soon as the sun hide. While we were having dinner, we decided that the best for the following day was going to be to just come back to the car and not try to get over complicated trying to find some other slope to ride or taking longer detours. Moreover, in this way, we could take it easy and enjoy our little cabin in the morning. 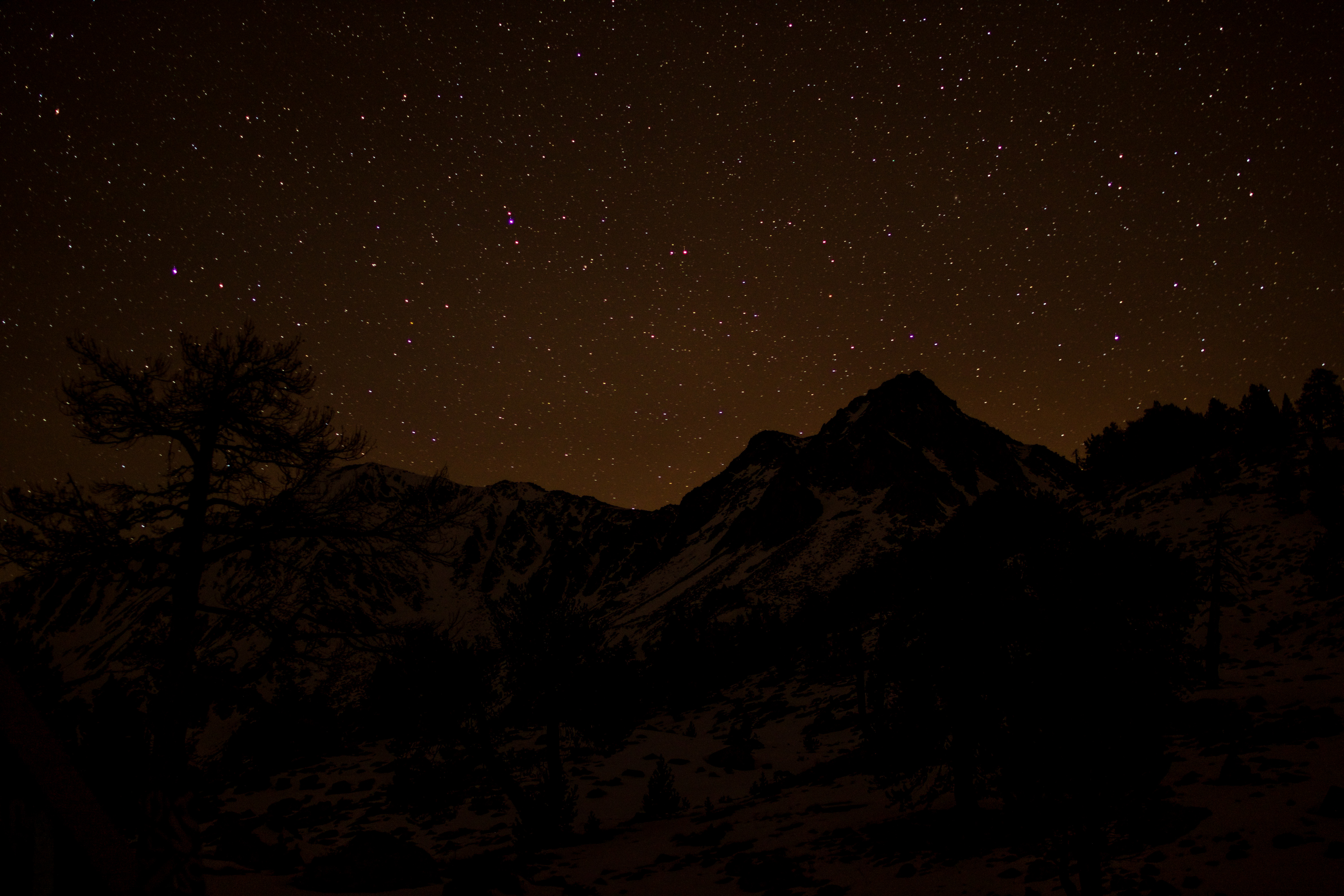 As expected, we start the following day by ten. The day before, letting aside the cramponing slope, it didn’t really felt like we took strong uphills even though we climbed some 900 vertical meters. However today we have to face two strong slopes.

The first one is just outside the refuge and it’s not really the kind of breakfast I was hoping for. 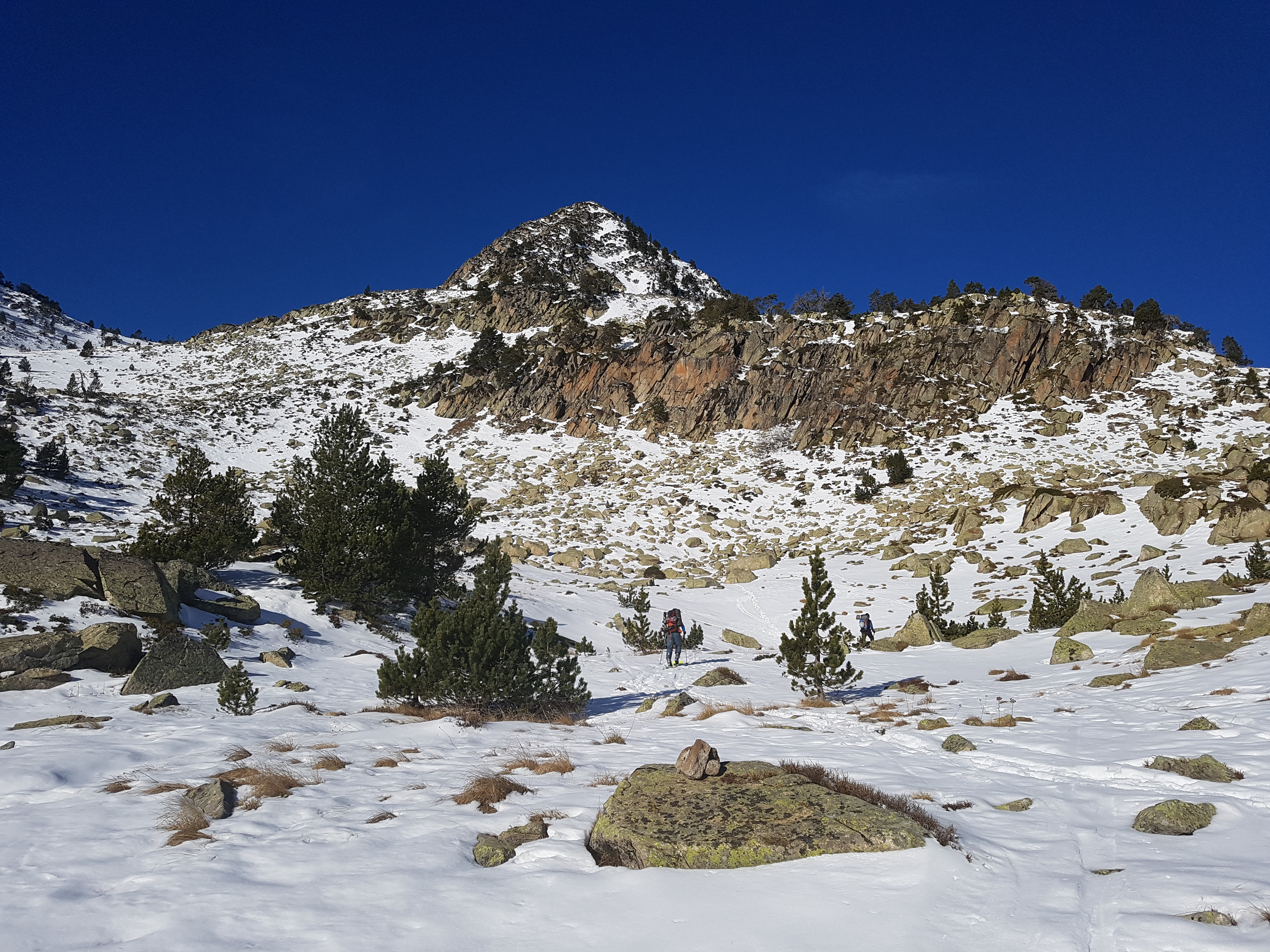 We manage to solve it quite fast but it didn’t felt easy, but dam, it feels good to finally face a proper slope and break it down with kick-turns. From the top we seek the col to cross.

We decide to take the more direct coll instead of the one we passed the day before even though it looks significantly bigger and steeper. The very end seemed kinf of exposed and most likely we would have to take it on crampons. The closer we get, the bigger the slope becomes. We are taking the first step of it and it’s becoming quite heavy. On the side exposed to the shadow the edges don’t really bite on the snow, so we open up to the sunny side where snow is starting to transform.

As we are exiting the first big step, the second slope feels a bit more kind.

The final slope seems segmented in two sides by a sort of snow spur. Towards the left it seems, steep, icy and exposed, but towards the right, it has less steepness and exposure and the snow is already transformed. We have a hint that we can probably do on safety at least half of it with the skins on.

I lead the way, and surprisingly we reach that mid point quite fast and without too much difficulties.

At that point I look at the slope and get confident. I feel like we can top it out on skis. I look at Diego and Julen and they confirm my theory. I keep the lead, meanwhile they put the ski crampons on. On the other hand, Jandri and Gon, as they are split boarding, they decide to get the planks on the backpack and the crampons on. Probably the best option. 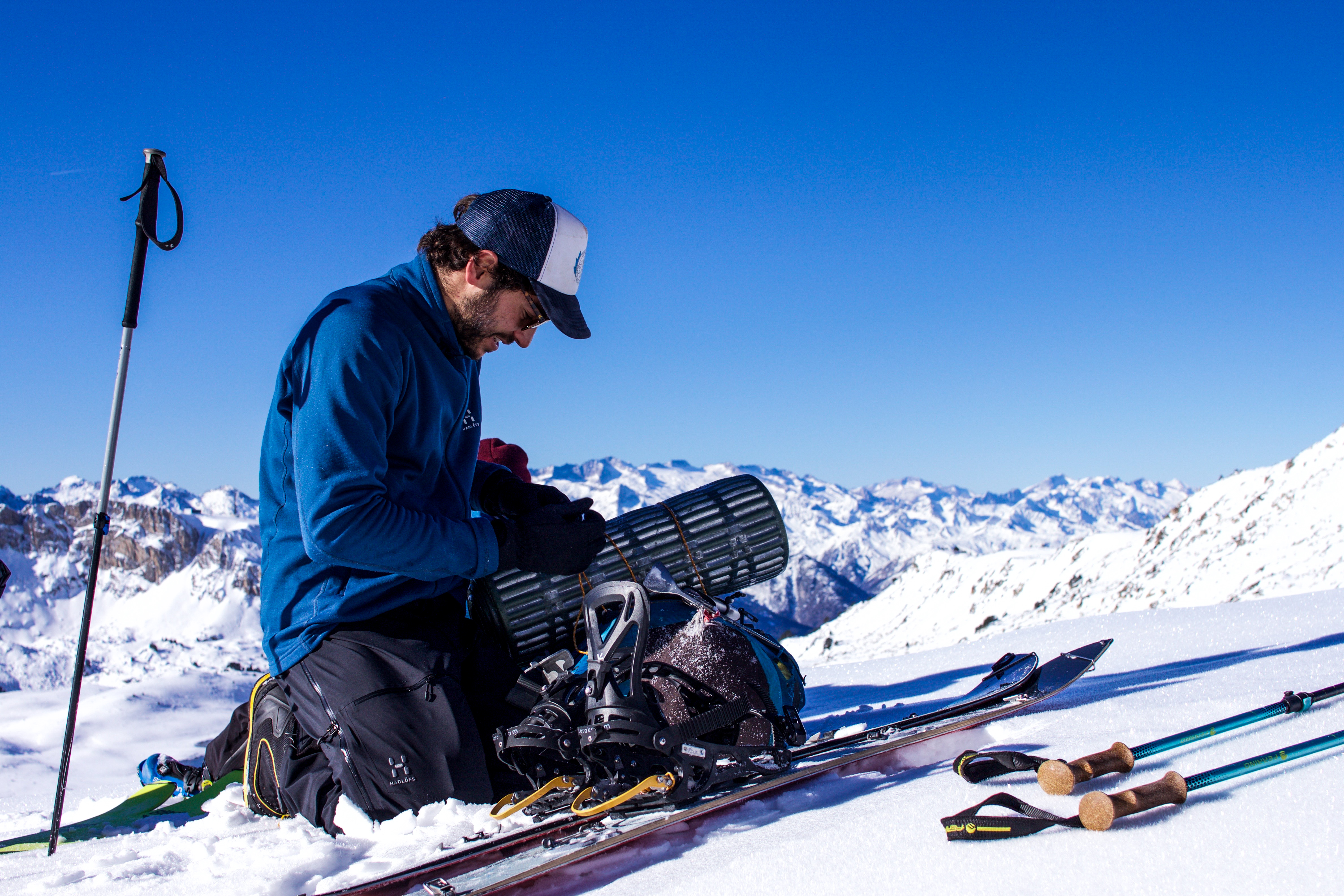 This second part was way tricker, and it really required to be technical and smooth on the edging game. The snow is softer here and it’s starting to slide down as you put weight on it.

After a few punk-ish kick-turns and a bit of drama on the last cornice we reach the top of the col.

It’s 12.30 and from here on it’s all downhill to the car. It was definitely a good exercise of ski alpinism. The season is officially on. 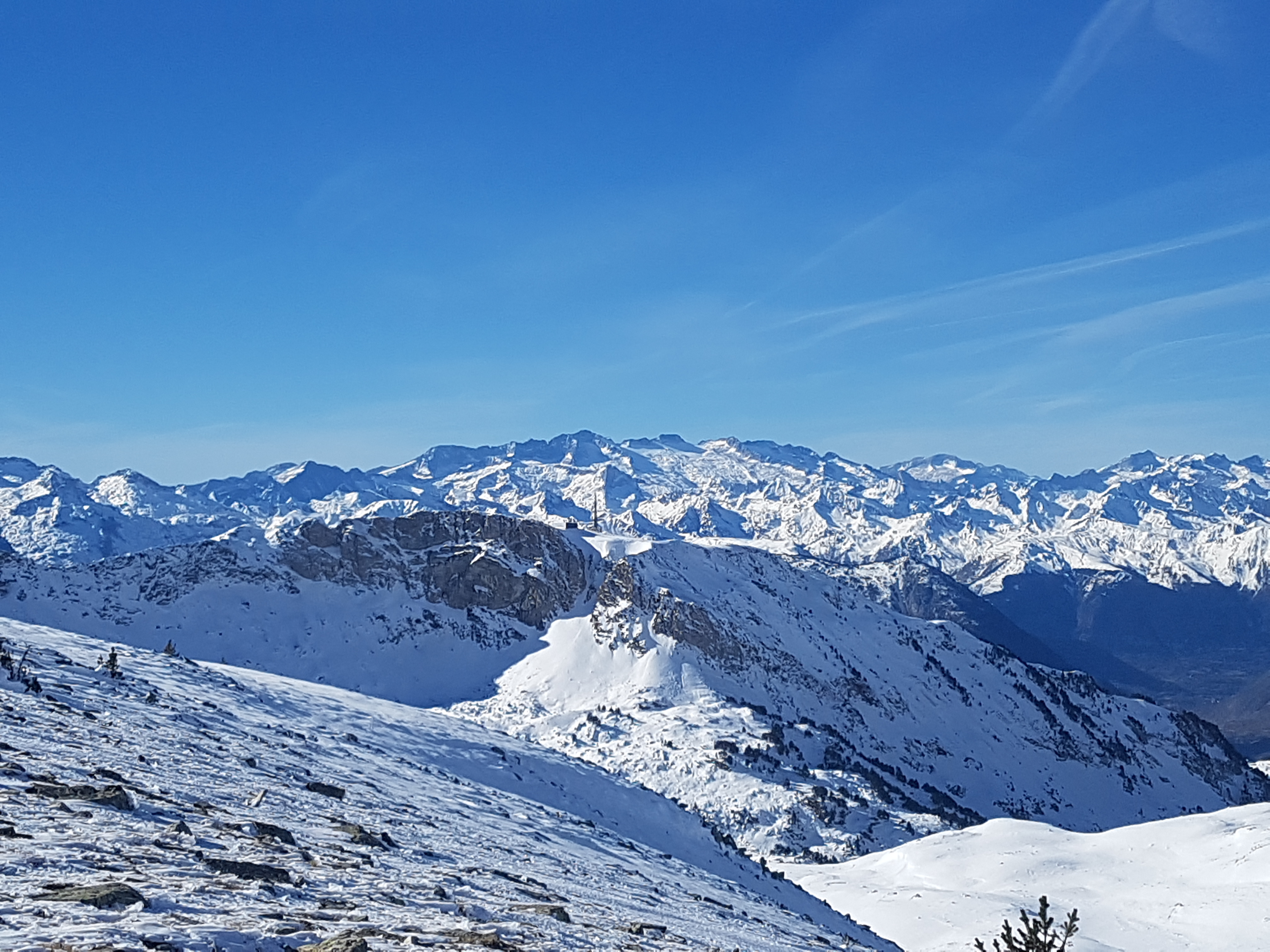 Before heading down we enjoy the view of the Tuc de Baqueira with the whole Aneto massif dominating the val d’Aran.

Thanks team for the photos, but especially to Diego that carried the whole weekend the tripod and the reflex around.