Last week I felt it was about time for multipitch and trad climbing so I called my friend Garro. I must confess that i was slightly afraid, as he always looks for badass activities and I was still healing my injured ankle. The idea was to head to the Zuriza valley, on the border of Navarra and Aragon, and seek climbing activities with alpine ambience, modest difficulties and semi-equipped trad pitches. How could I say no to something like that! 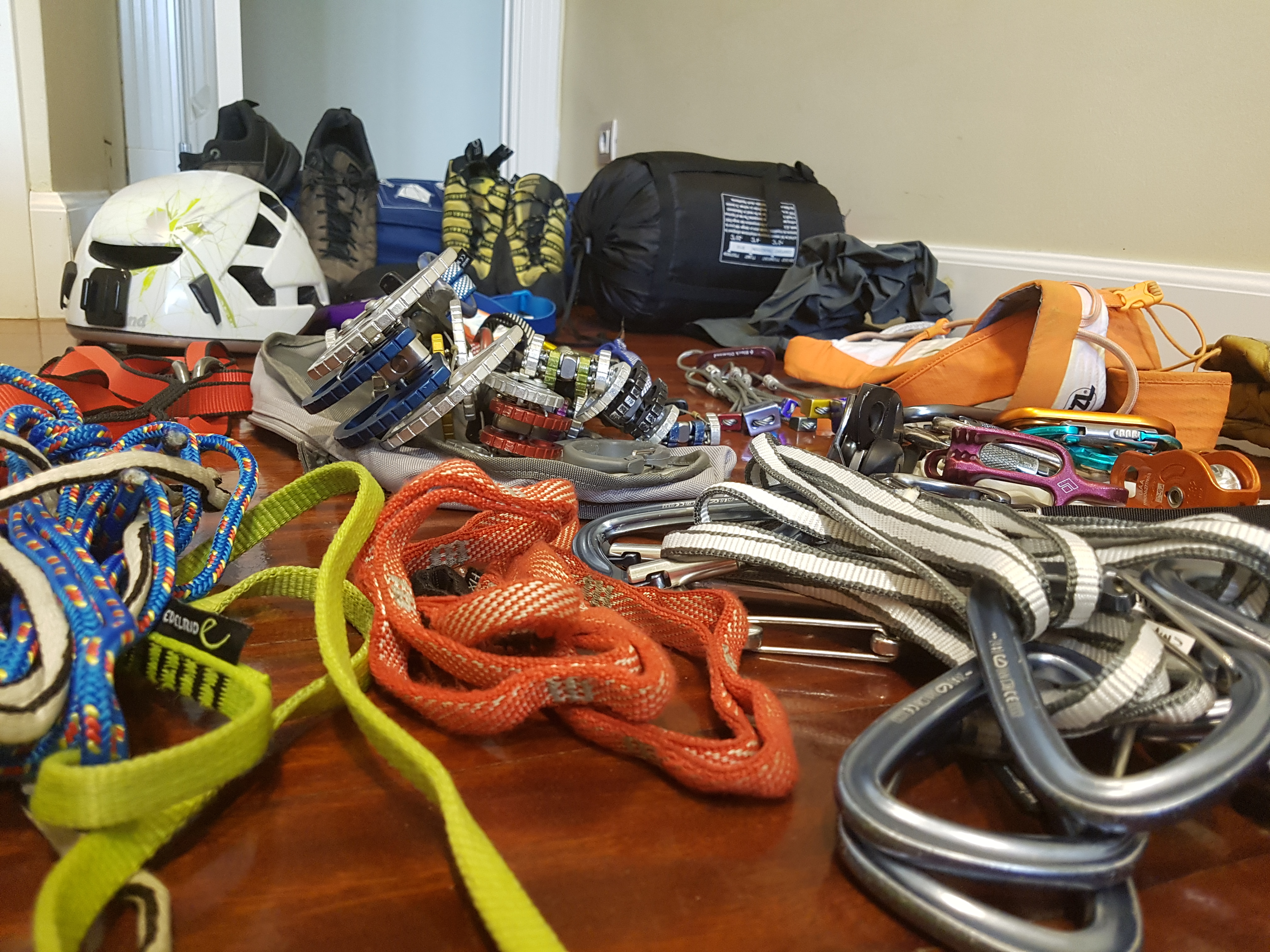 It’s ON. We had several objectives in mind, but in the end we decided that the best menu for a first contact with the valley was probably the Esminu + East ridge to the Ezkaurre mountain (6b, 300m, V+obl) and the Directa Ansó to the Paso spur (170m, 6a+, Vºobl).

We were supposed to be two rope parties but in the end we were eight people in the plan. Not everyone was knowing each other and we were not sure how we were going to organise the rope parties. Moreover, we reached the valley in the night and past midnight there was still one person that hadn’t showed up yet: Carlos from Sabiñanigo.

He was in fact supposed to be my rope party and only a few people in the group knew him. However, they knew him from several climbing trips and he is a true rock warrior. Finally he made it after 1a.m., he drank two beers in less than five minutes and we finally got into organizing the following day. It turned out that he was knowing every route in the valley almost by heart.

In the end we convinced Xabi and Jon Ander to rope up with Carlos to make a strong party and tackle the Harrimina in the Codero wall (6C, Ao, 300m), while Garro, Karlos and me (yes, I know, we were three Carlos in the group…) would make another three party rope and head to the Esminu with Alba and Raúl. 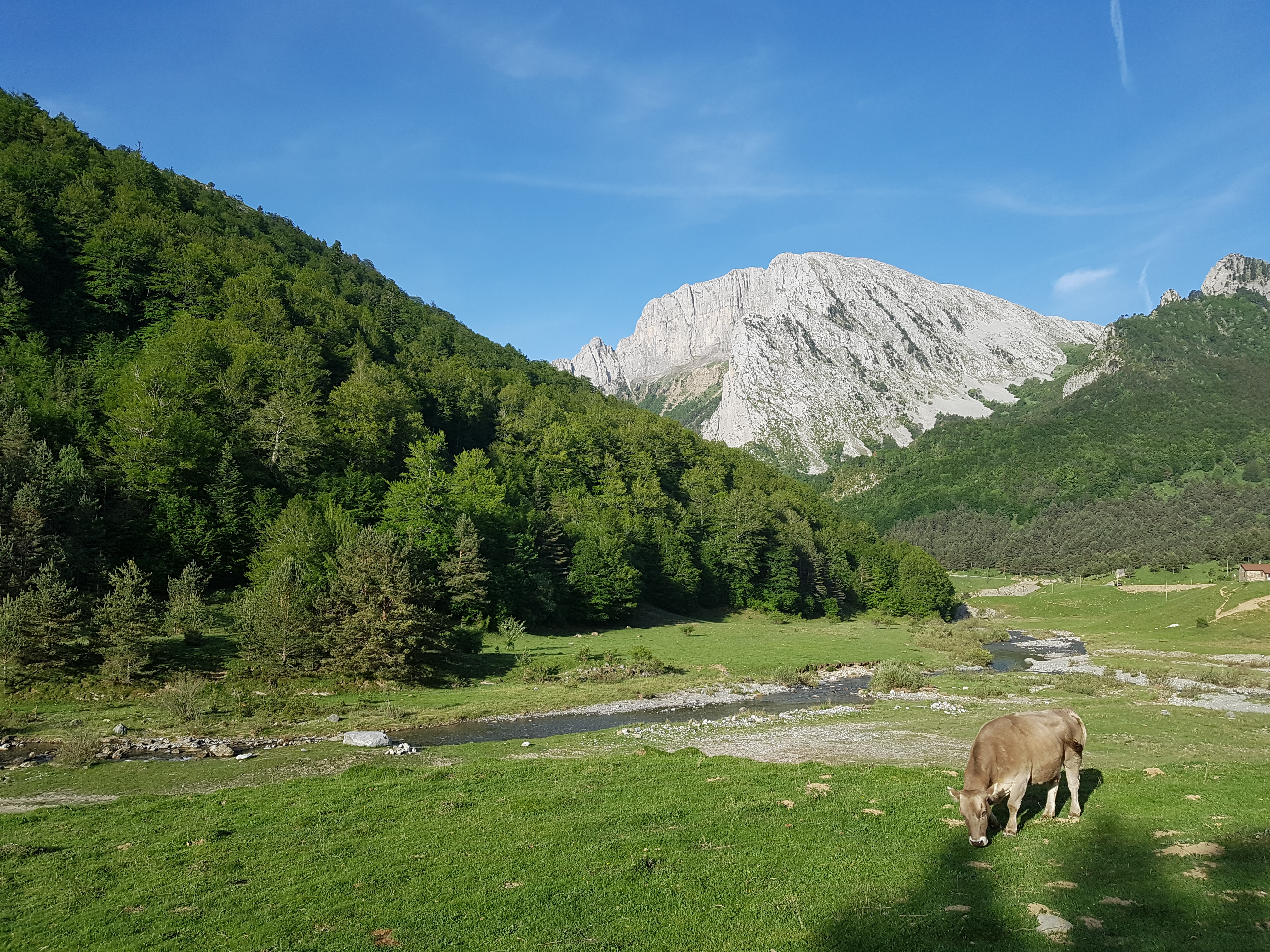 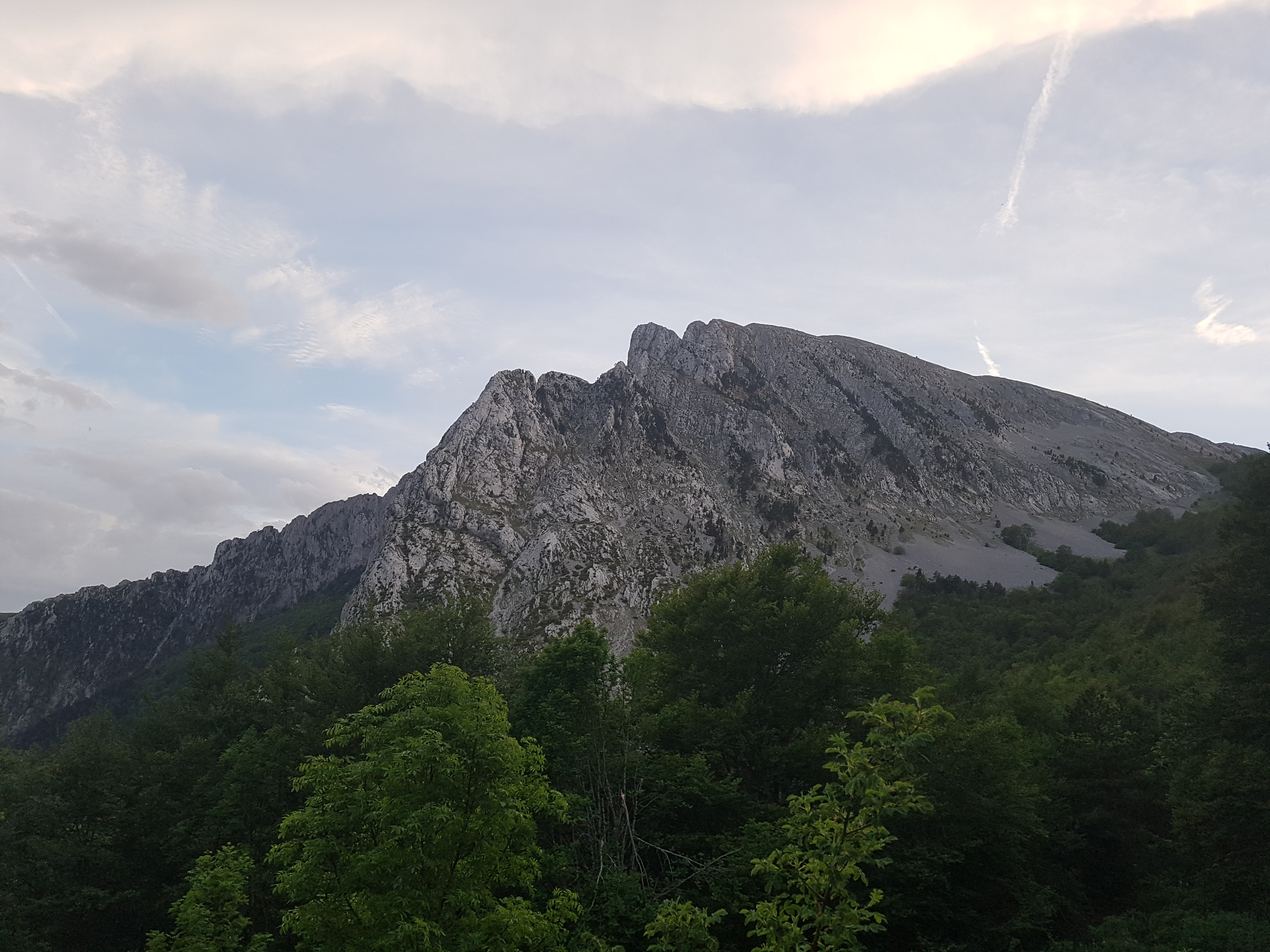 Xabi and Jon Ander woke up pretty early due to the fact that a bunch of cows were licking their Van and it turned out that the tongue of the cow against the glass was making a pretty loud sound. They soon woke us all, quick breakfast and time to head the wall.

But first, let’s finally get some minutes to enjoy the view. 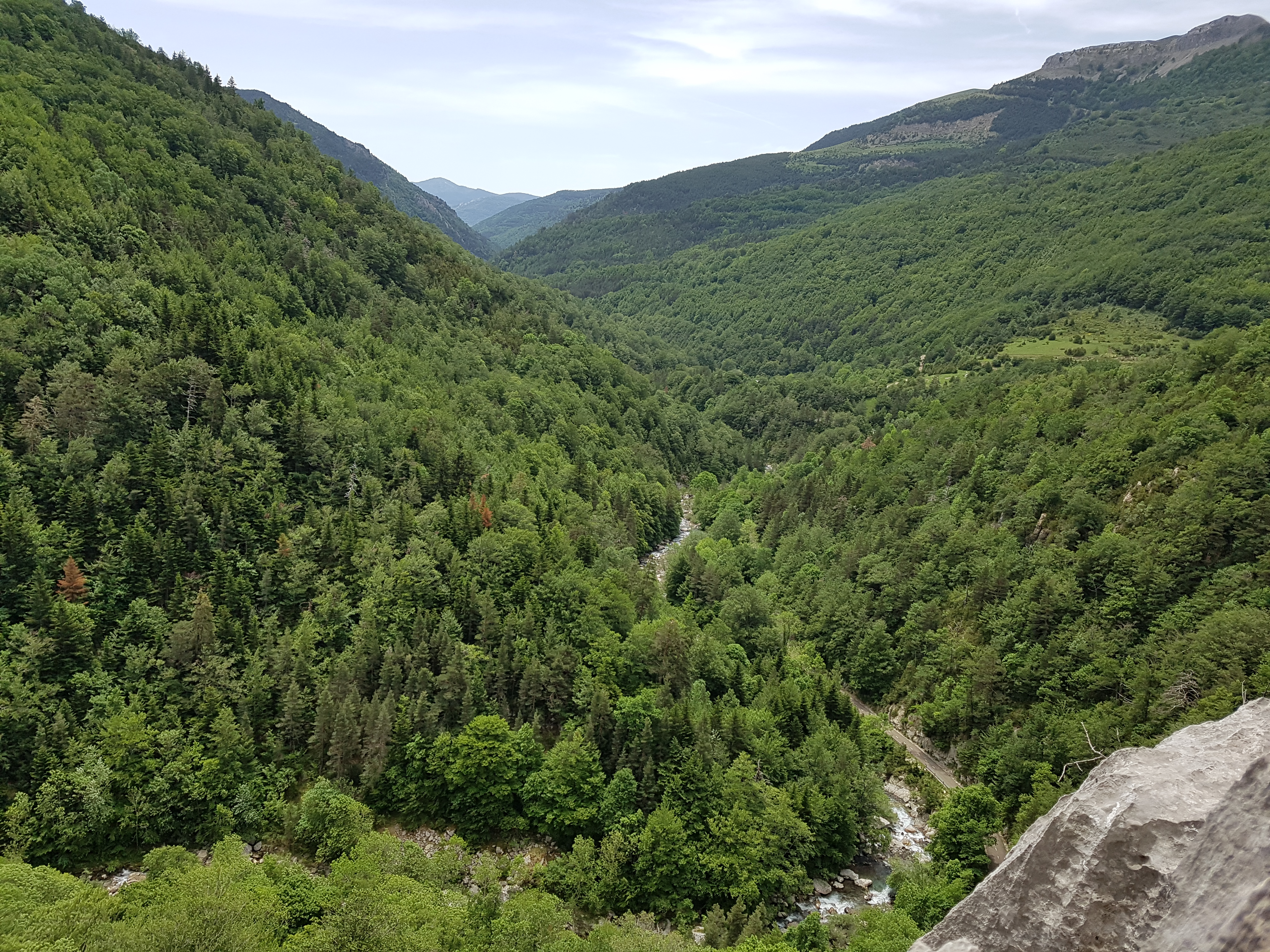 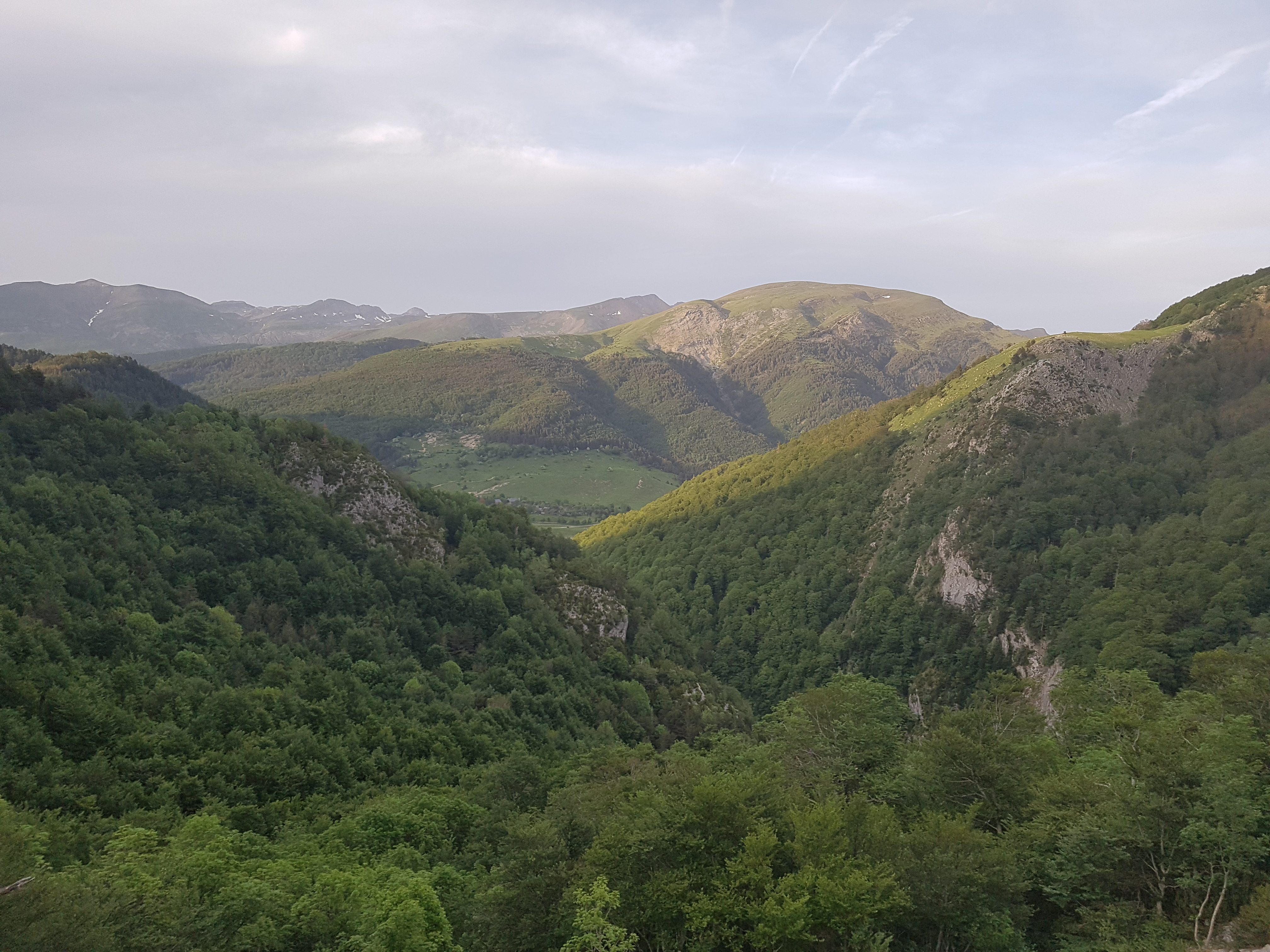 The approach to the Esminu is not too long. First a trail in the woods for some 10-15mins and then the paths gets into a moraine of loose rock. It gets trickier to progress and it gains progressively in exposure the closer we get to the belay ledge. 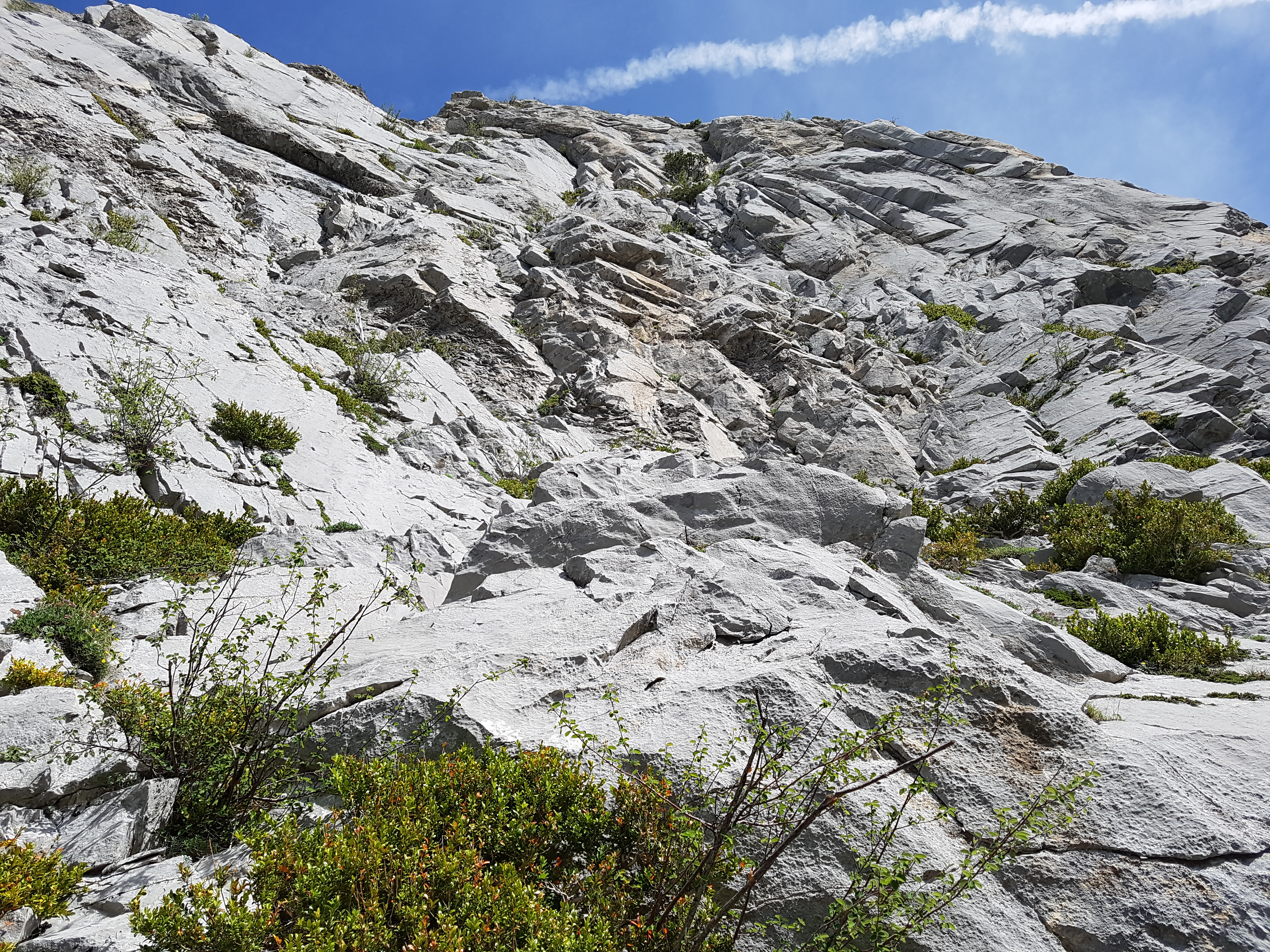 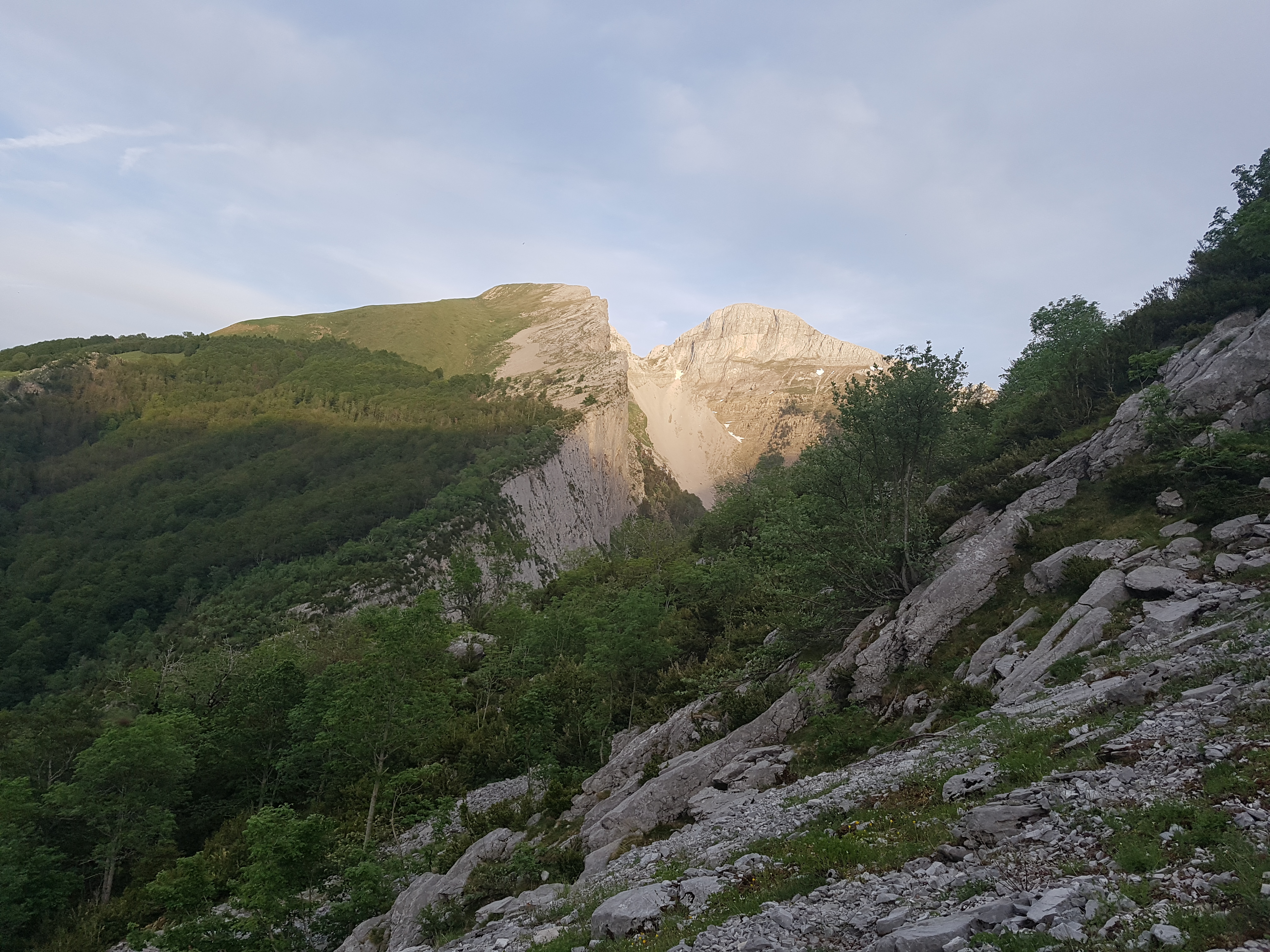 Watch out, we had some problems finding the route and In fact we started opening somewhere wrong at first. The route is at the very end of the trail, where it gets steep and you should be able to see the parabolts of the second pitch from the base of the route. 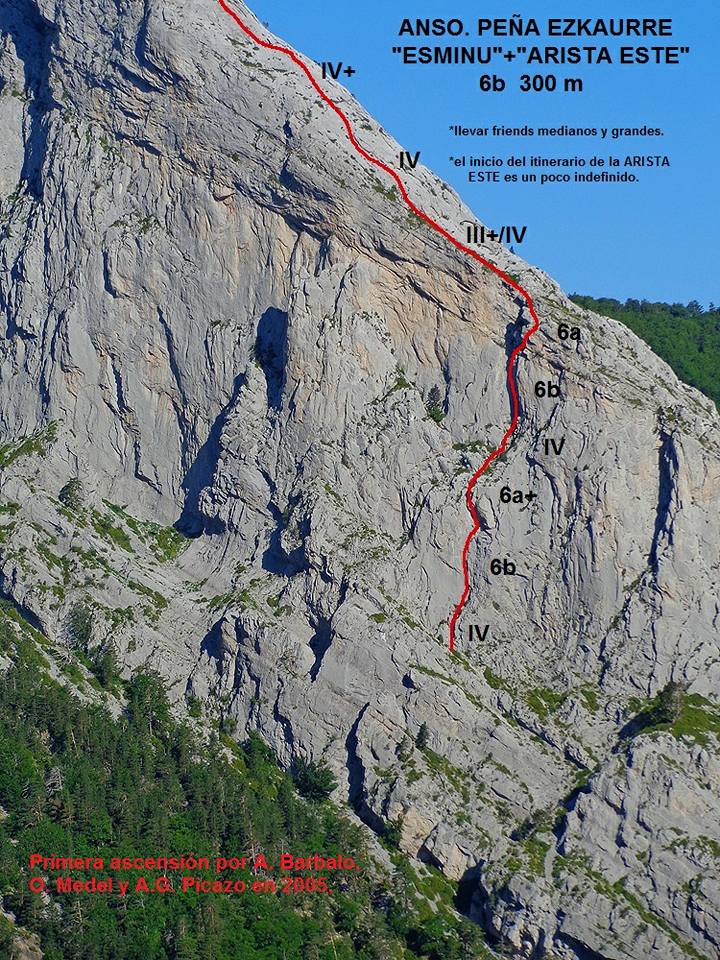 The first 6b and 6a+ difficulties worked out fine. The limestone is compact and has solid grip. Both pitches feel pretty sport climbey; well protected with parabolts and elegant moves where the slab meets a chimney-diedral-spur kind of formation.

After that there is a IV exposed traverse, hard to protect and full of loose rock. It’s a pretty alpine pitch. In fact, from here on, there is going to be loose rock in pretty much all the ledges, so watch out especially if there are several rope parties on the route.

The next section of the wall in most topos is supposed to be less difficult than the first 6b pitch, however it turns out to be way more delicate and technical. The first diedral is slightly overhangy, poor feet placement and protected on two pitons; in fact I took a fall on this section on the follow. 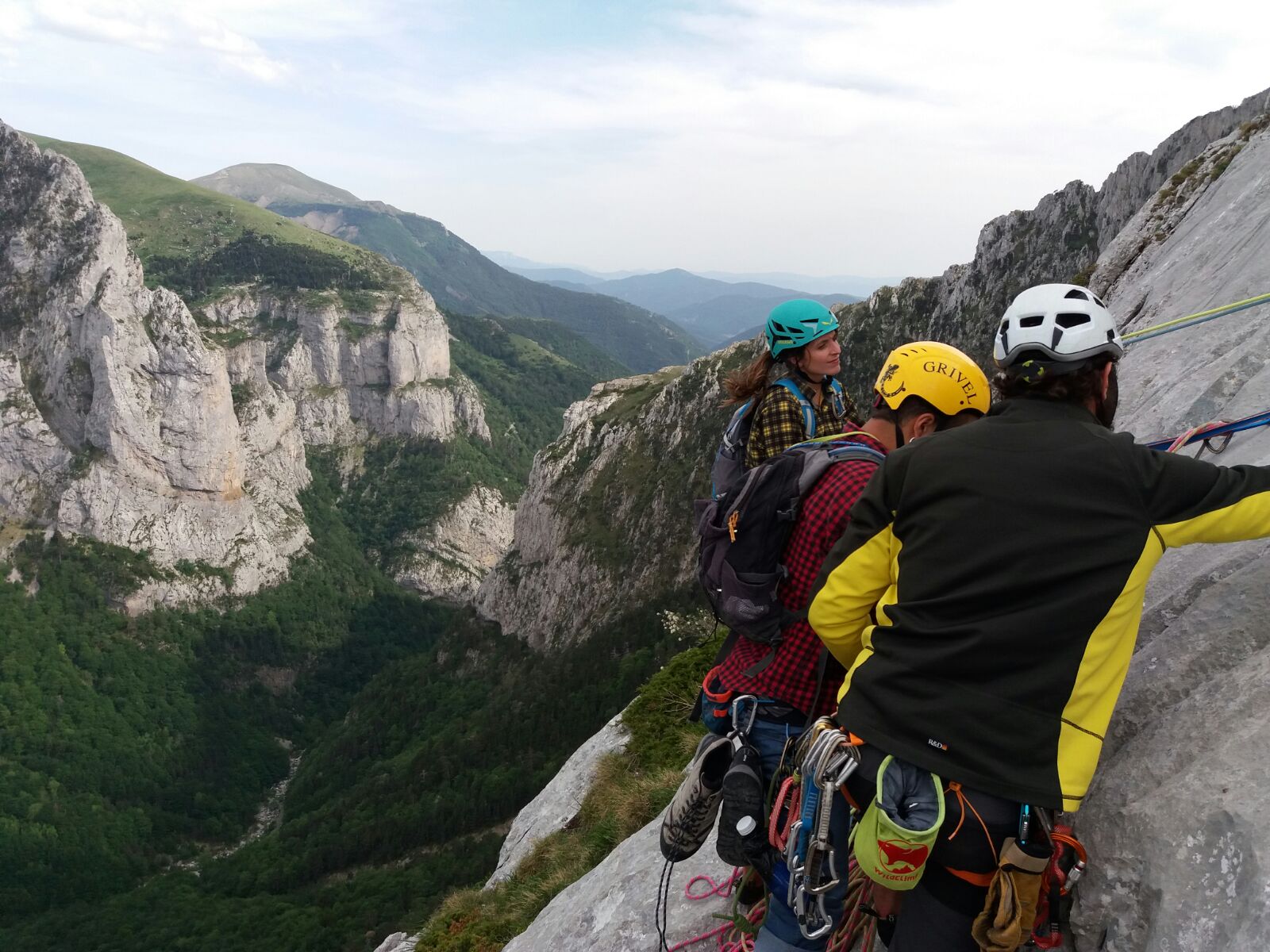 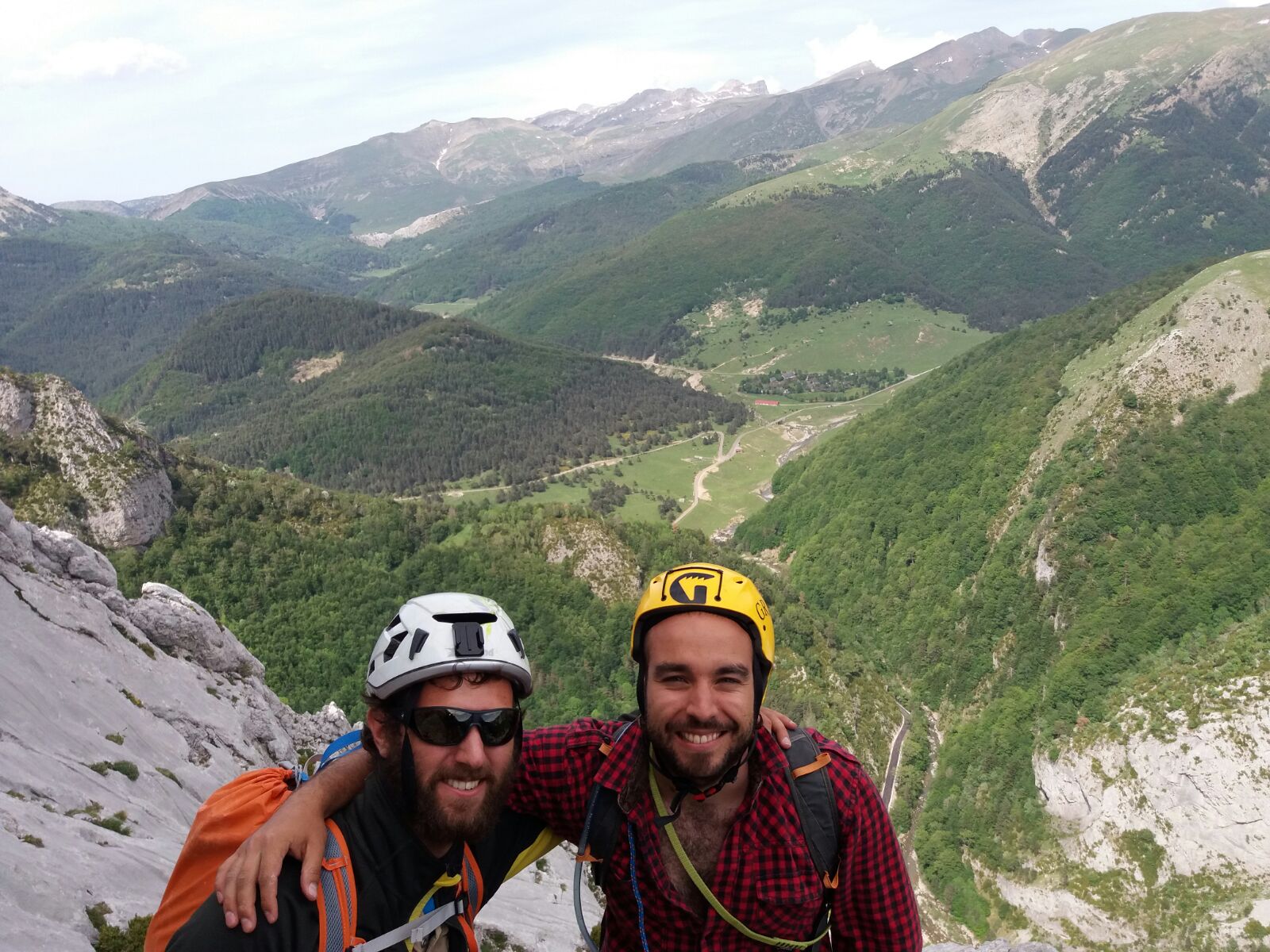 Once you get over the diedral, you enter into a chimney that you have to protect on gear. It’s not that hard, but for some reason I was kind of uneasy on that section. From the chimney you get into the East ridge.

We went for some pitches on the ridge with the objective of reaching the entrance to the descent couloir. Those pitches are easier, enjoyable and with really cool sections, however they are quite climbey for been V grade. 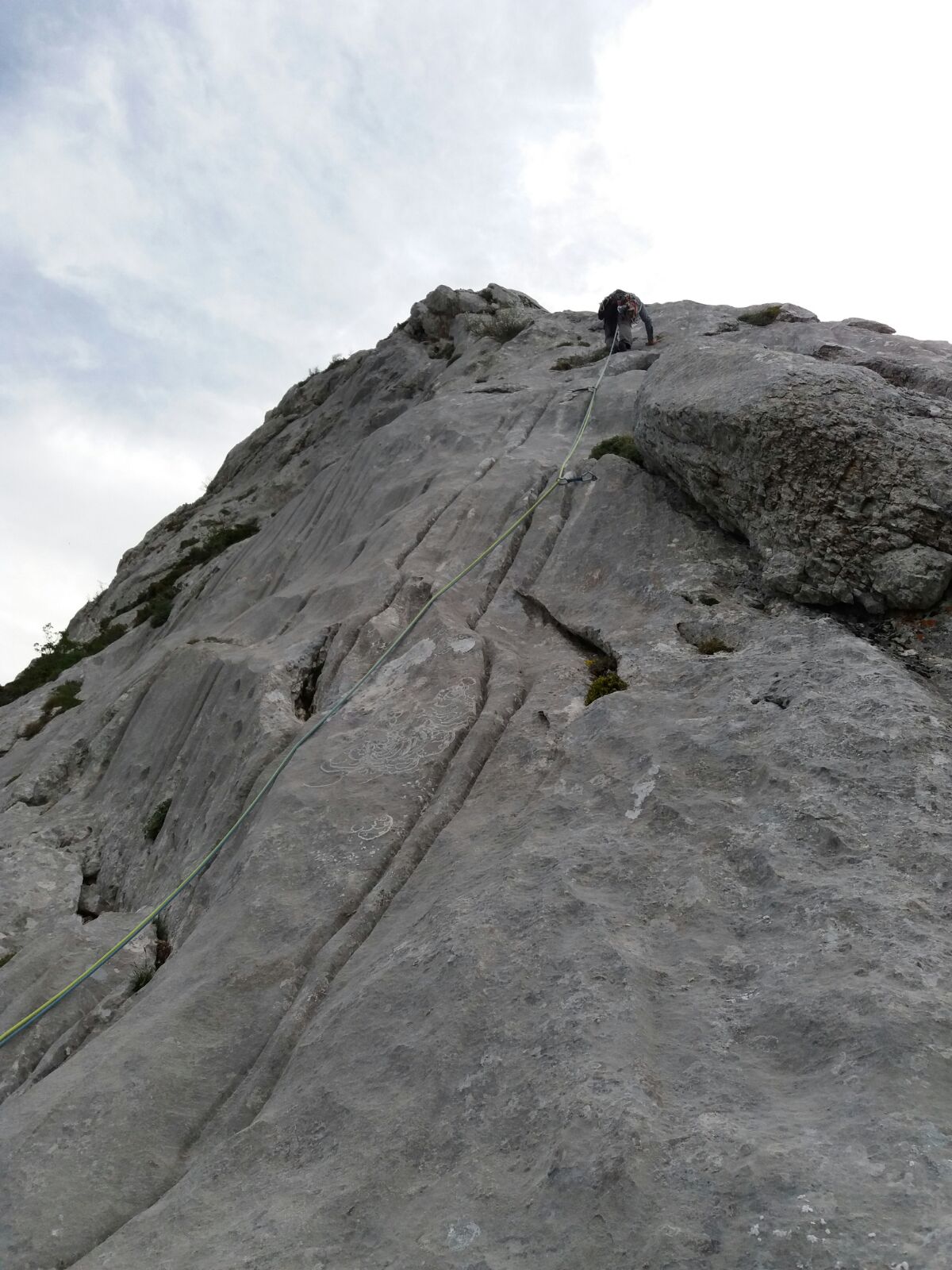 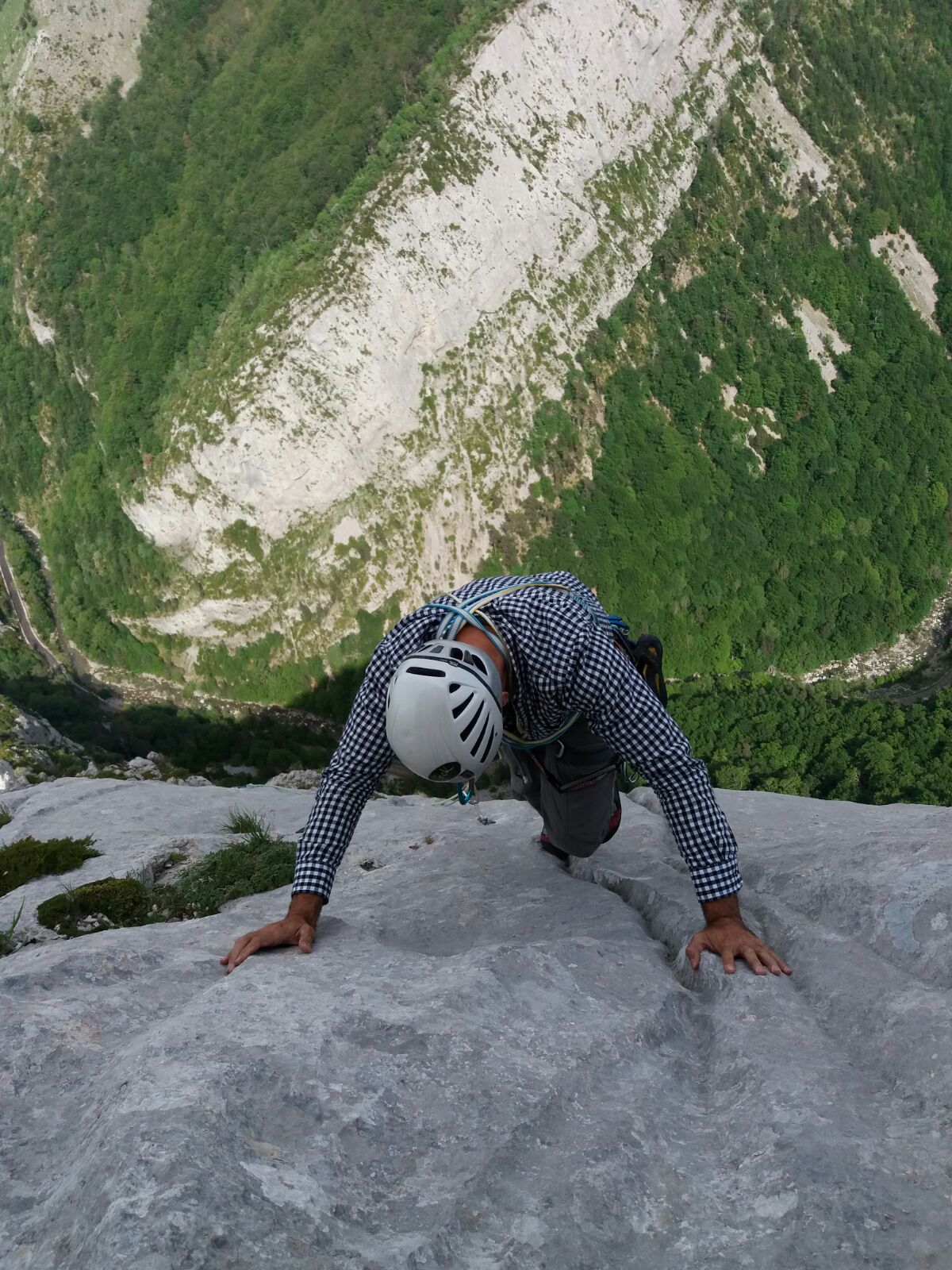 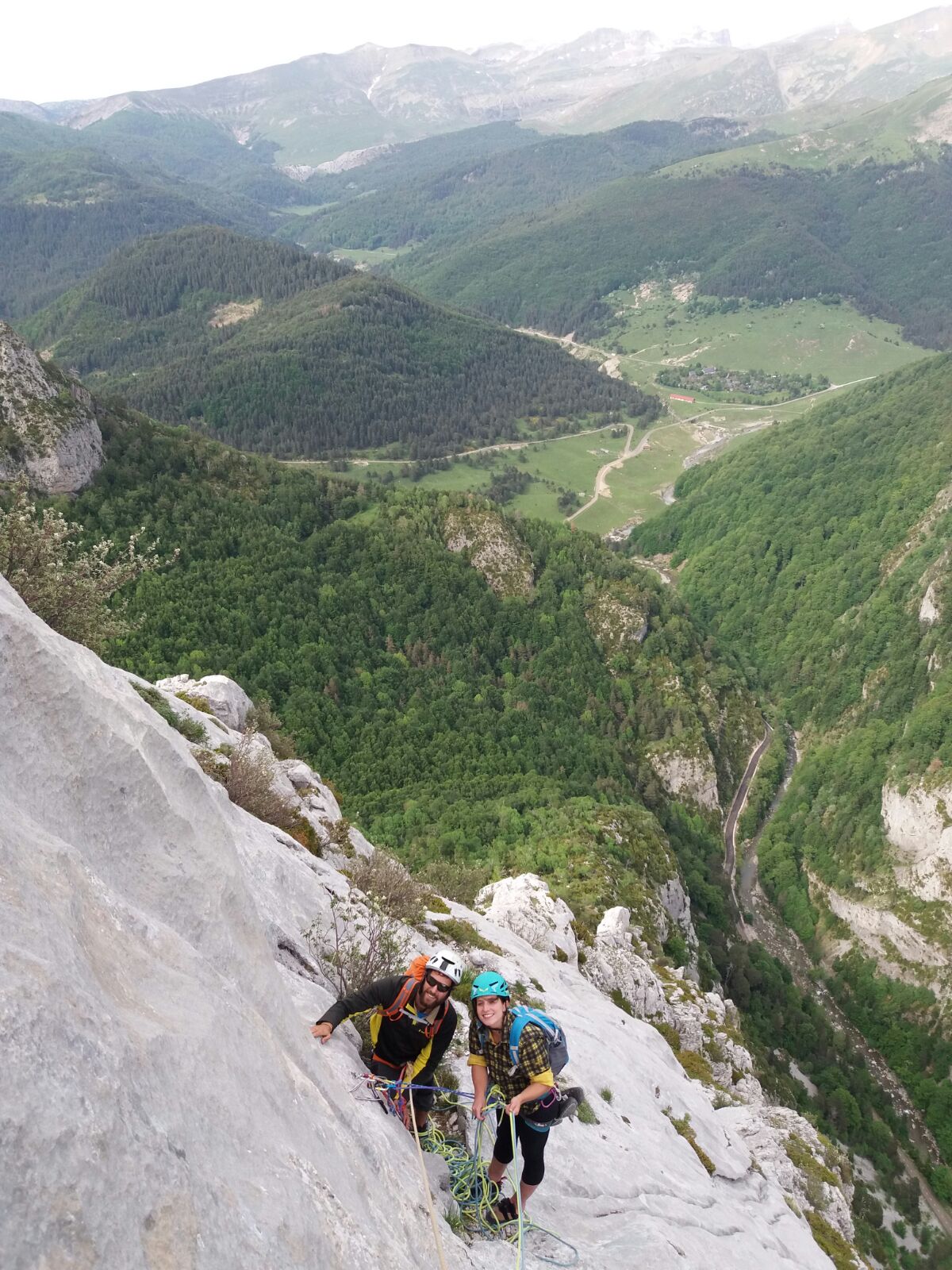 For a final surprise the descent through the canal had quite some adventure. We set a few rappels to reach the base of the moraine, but after a long day, it’s hard and uncomfortable to progress on this terrain. We start to think that perhaps it would have just been easier to summit the mountain, border the whole ridge and go down through the hiking trail. 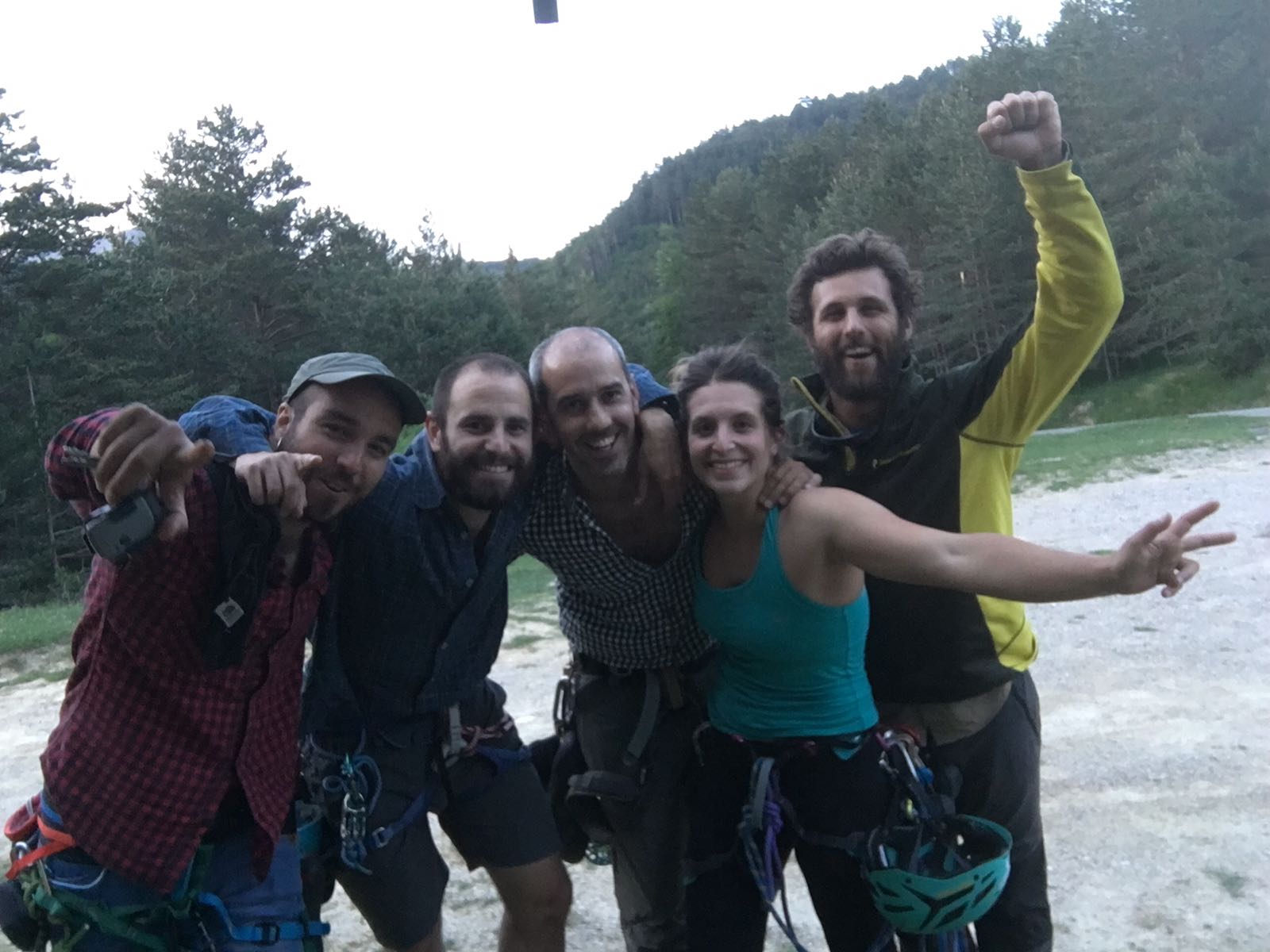 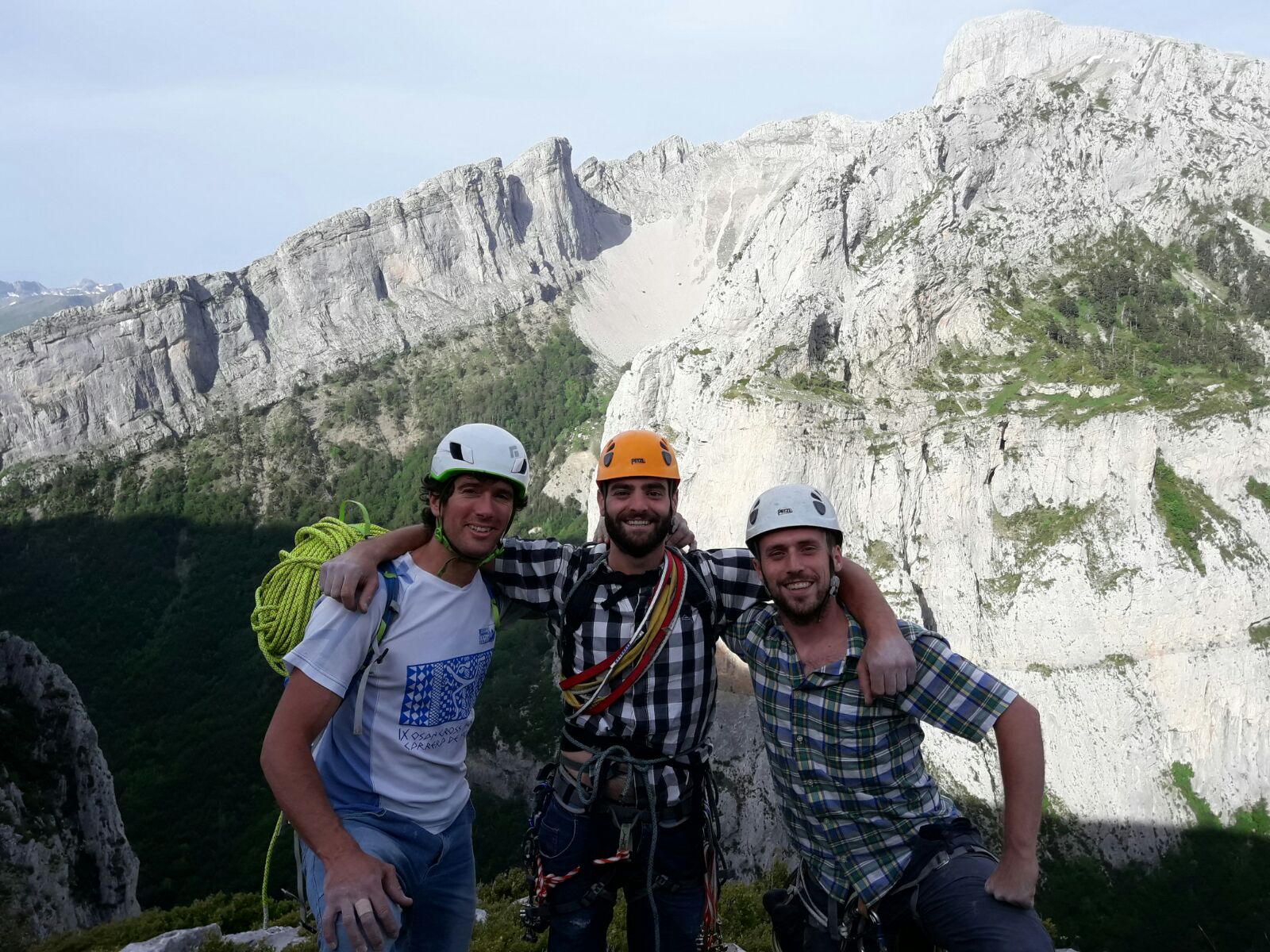 We made it to the camping by sunset where we met with the third rope party. We had some beers, dinner, more beers and talked about our little climbs of the day. 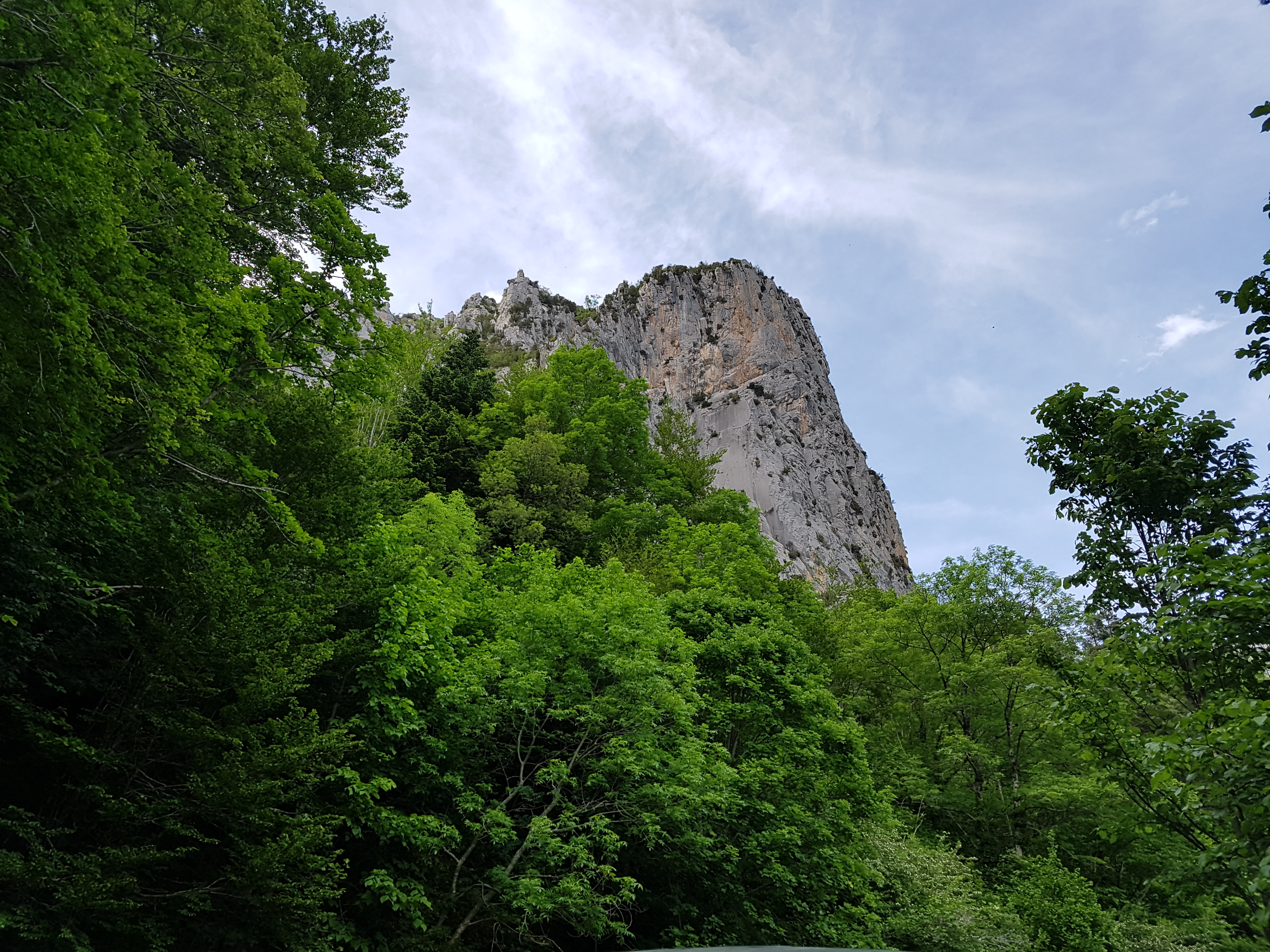 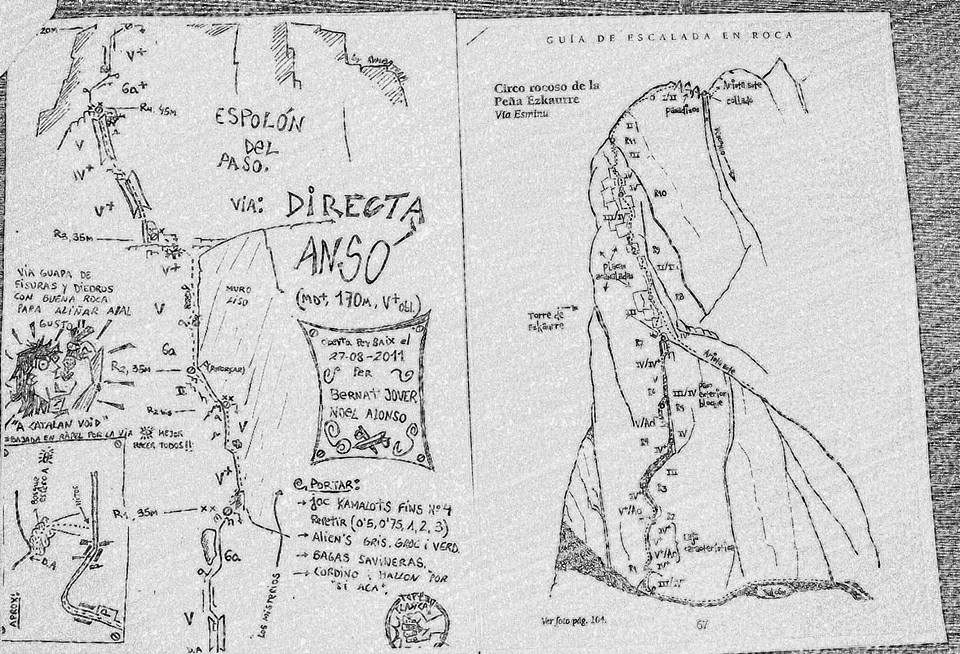 This route has all the belaying anchors equipped and there are a few pitons around, however you must self protect the pitches. The approach is short but goes over a steep moraine of loose rock and then through some very dense vegetation. 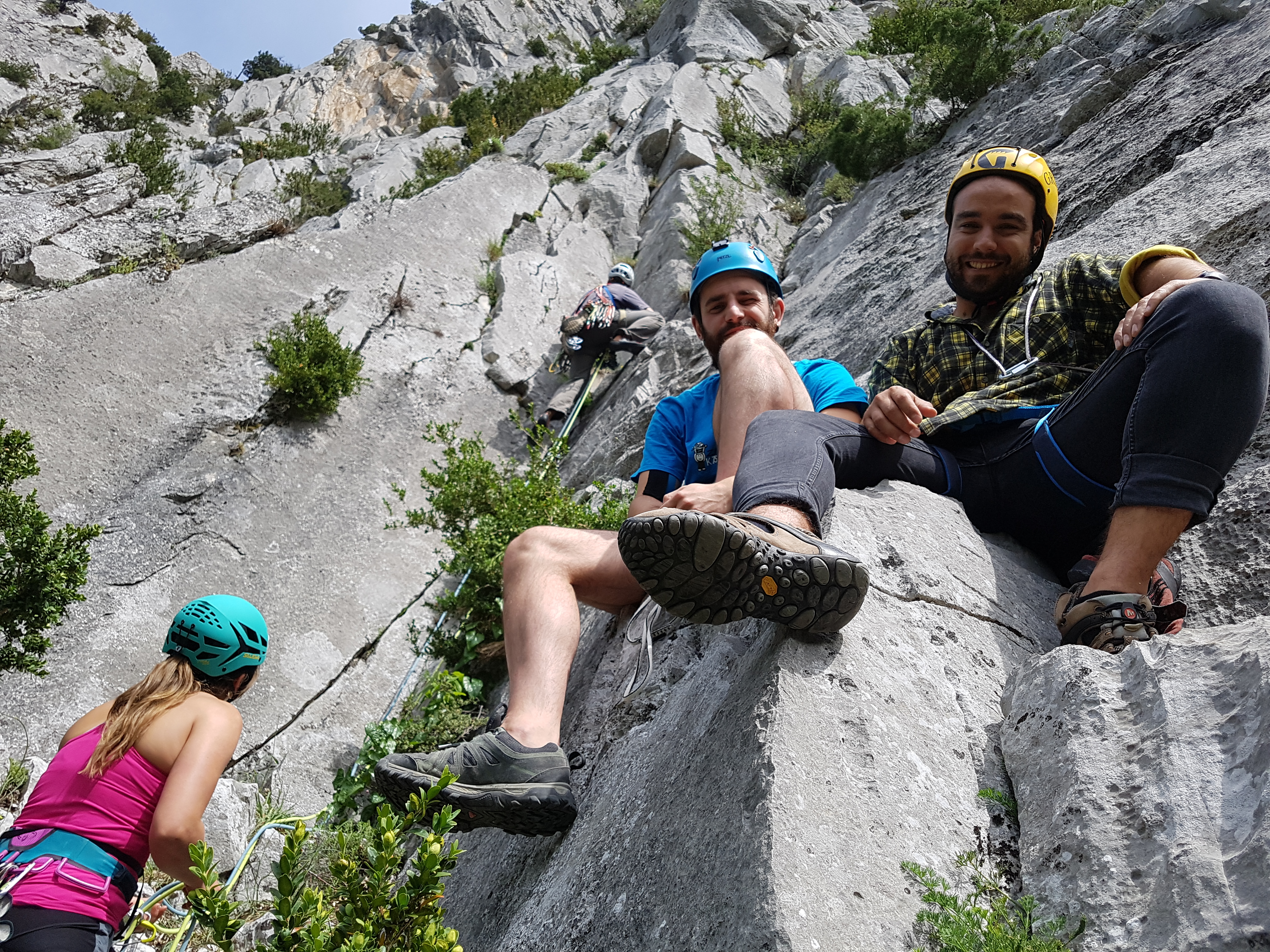 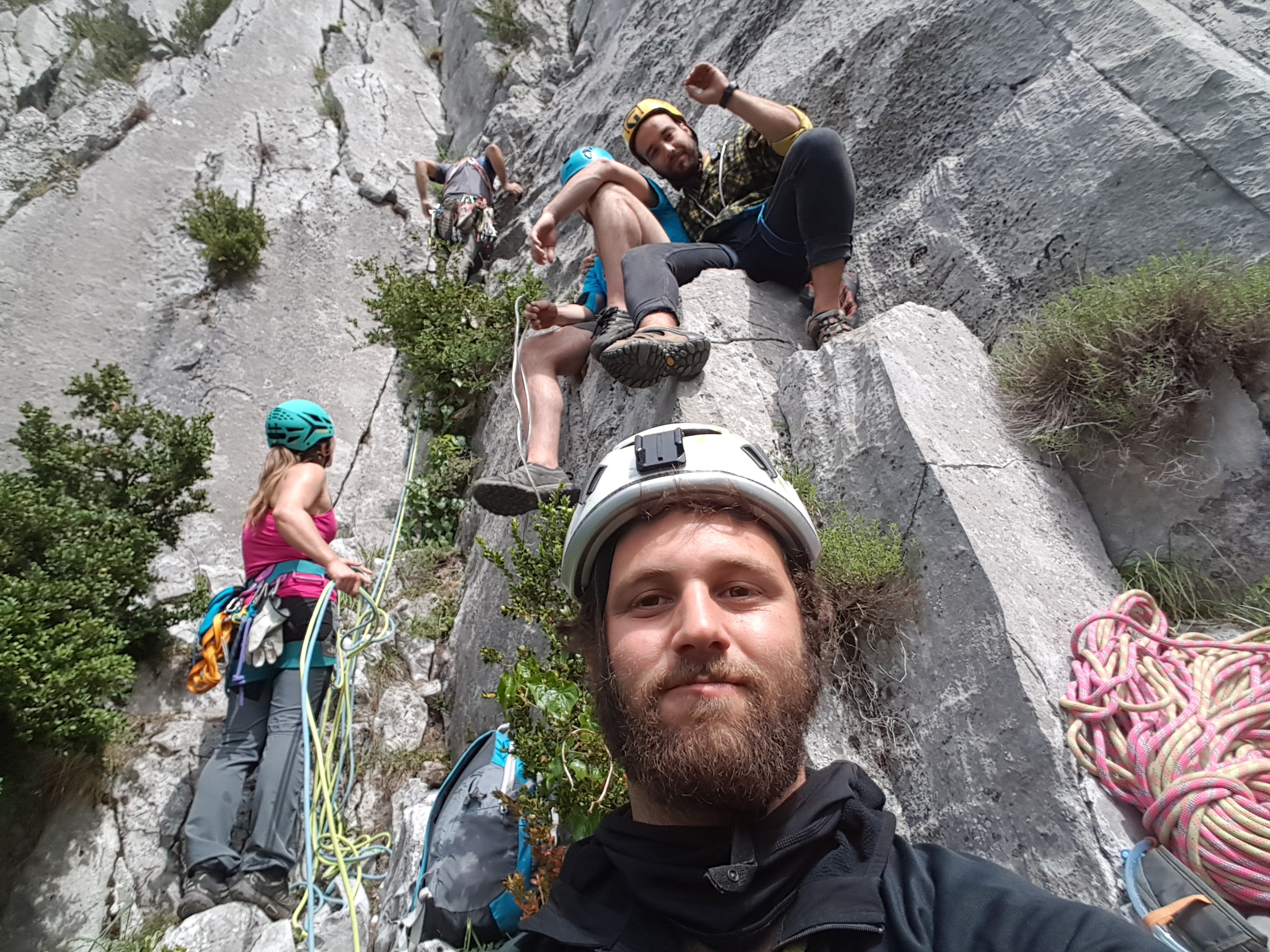 The first pitch is quite straightforward. Good gear placements and there is a little 6a move, just enough for getting some confidence. 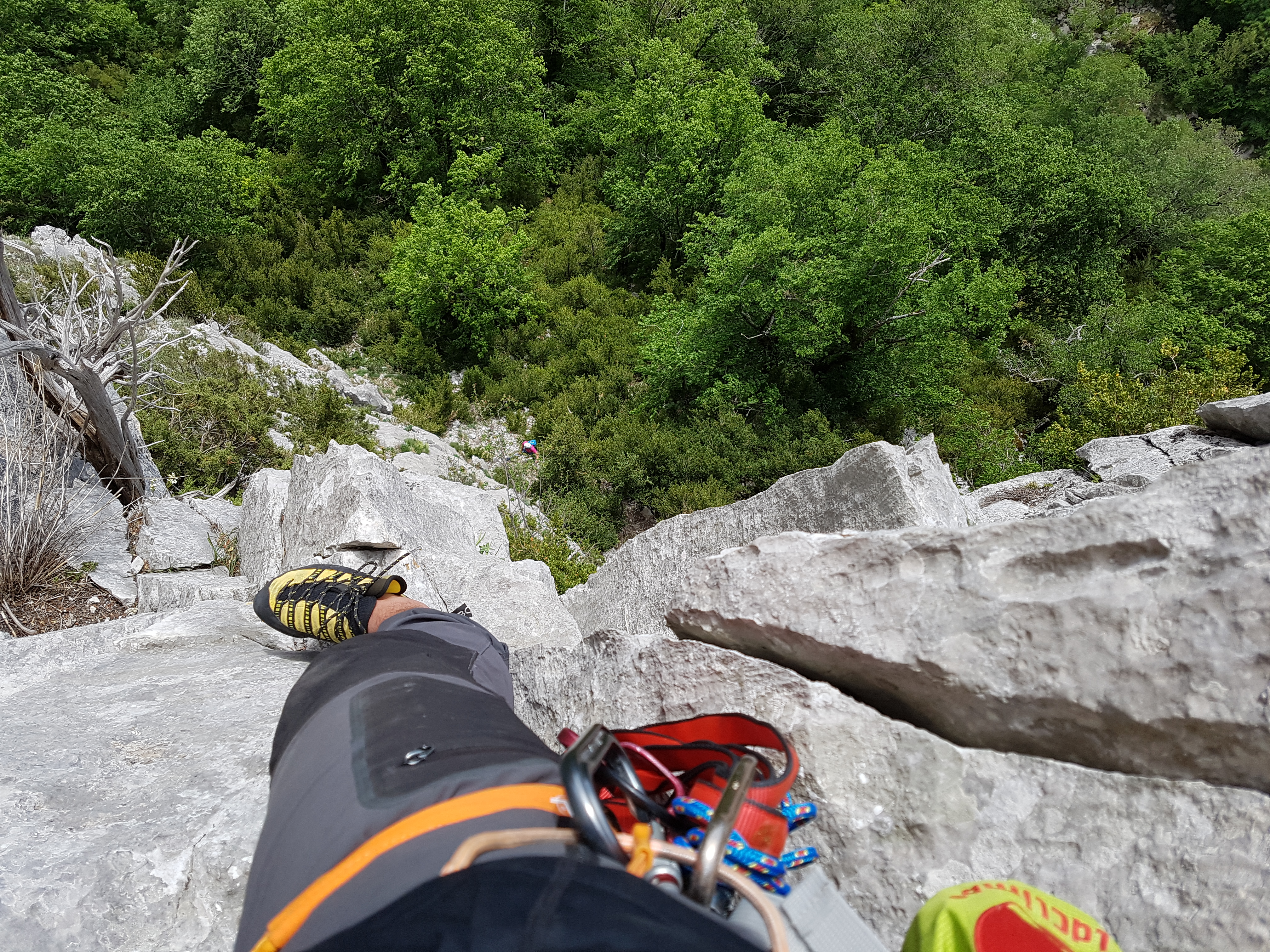 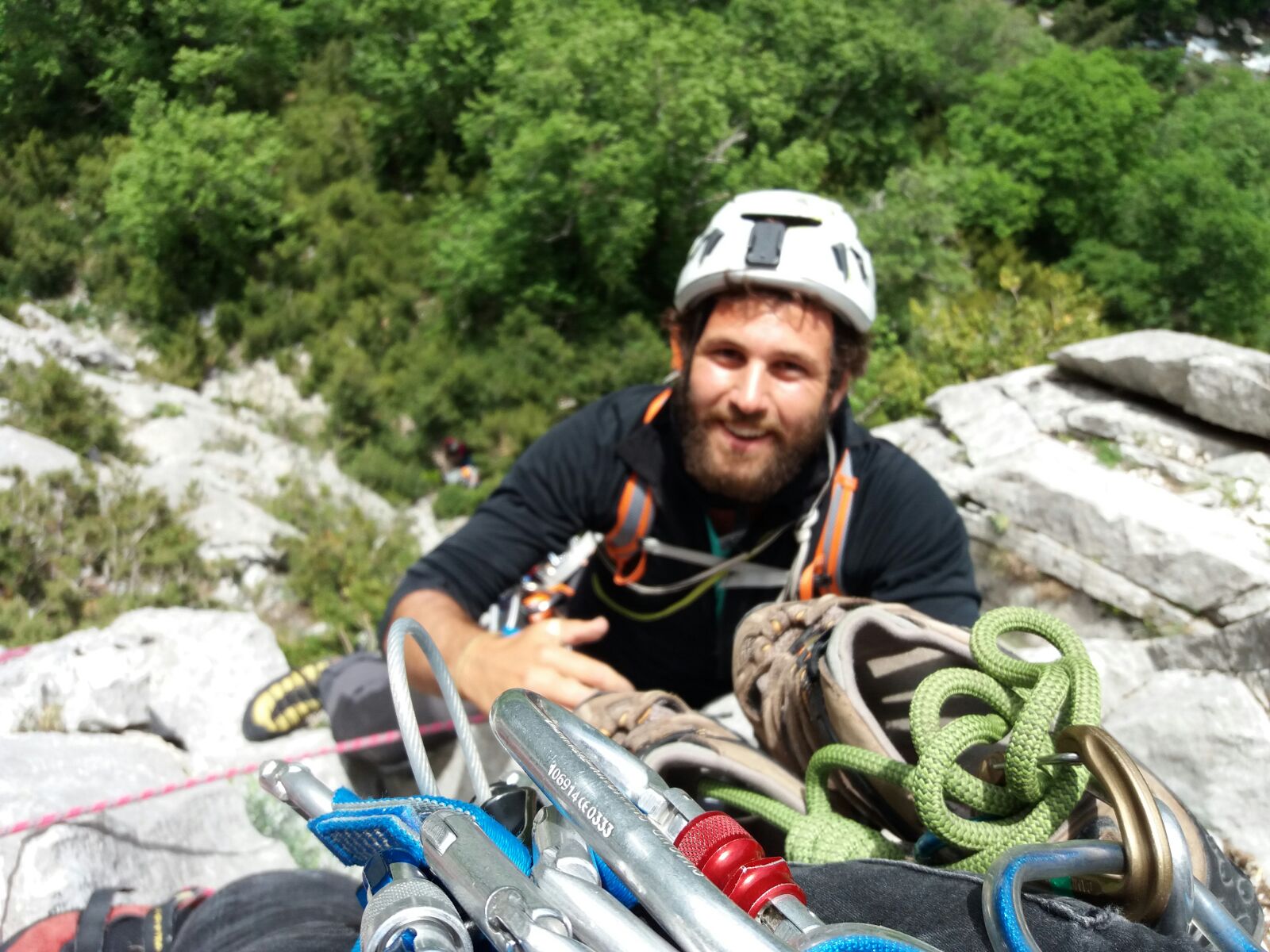 The second and third pitches, on the other hand follow two dihedrals. On paper they are V+ and 6a+, but in fact they are…let’s say spicy.

As you must progress through the dihedral crack, you find good spots for protection while doing hand and feet locks. The limestone is sharp so has very good grip, but in both sides of the diedral there are virtually no holds and you must progress pretty much on friction moves. There are a few sections where it gets steep and even slightly overhanging.vYou are most likely going to sweat in those pitches if you are leading.

ONTHEBELAY  Rock climbing in Chamonix mid February? In the Sun?! 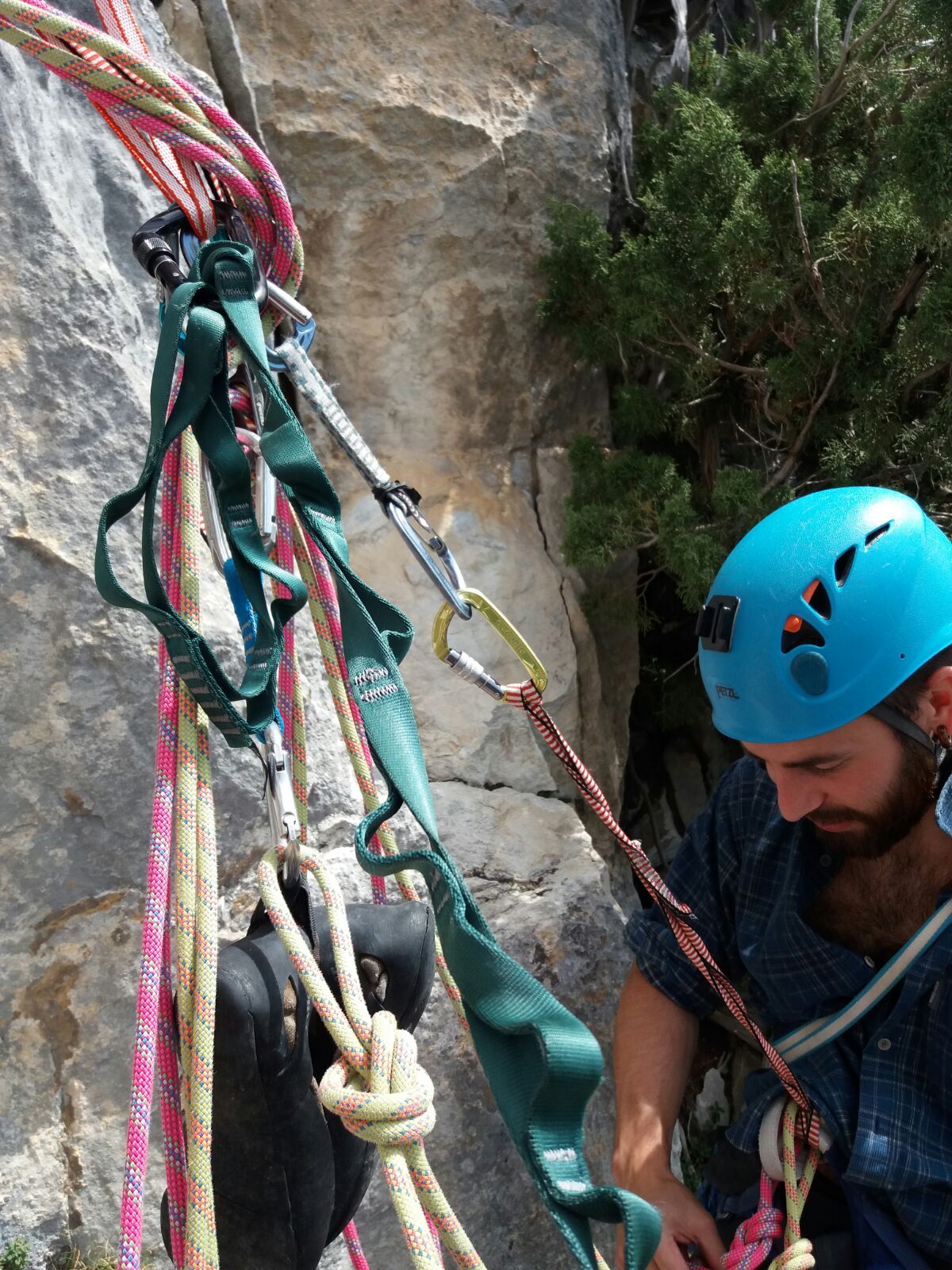 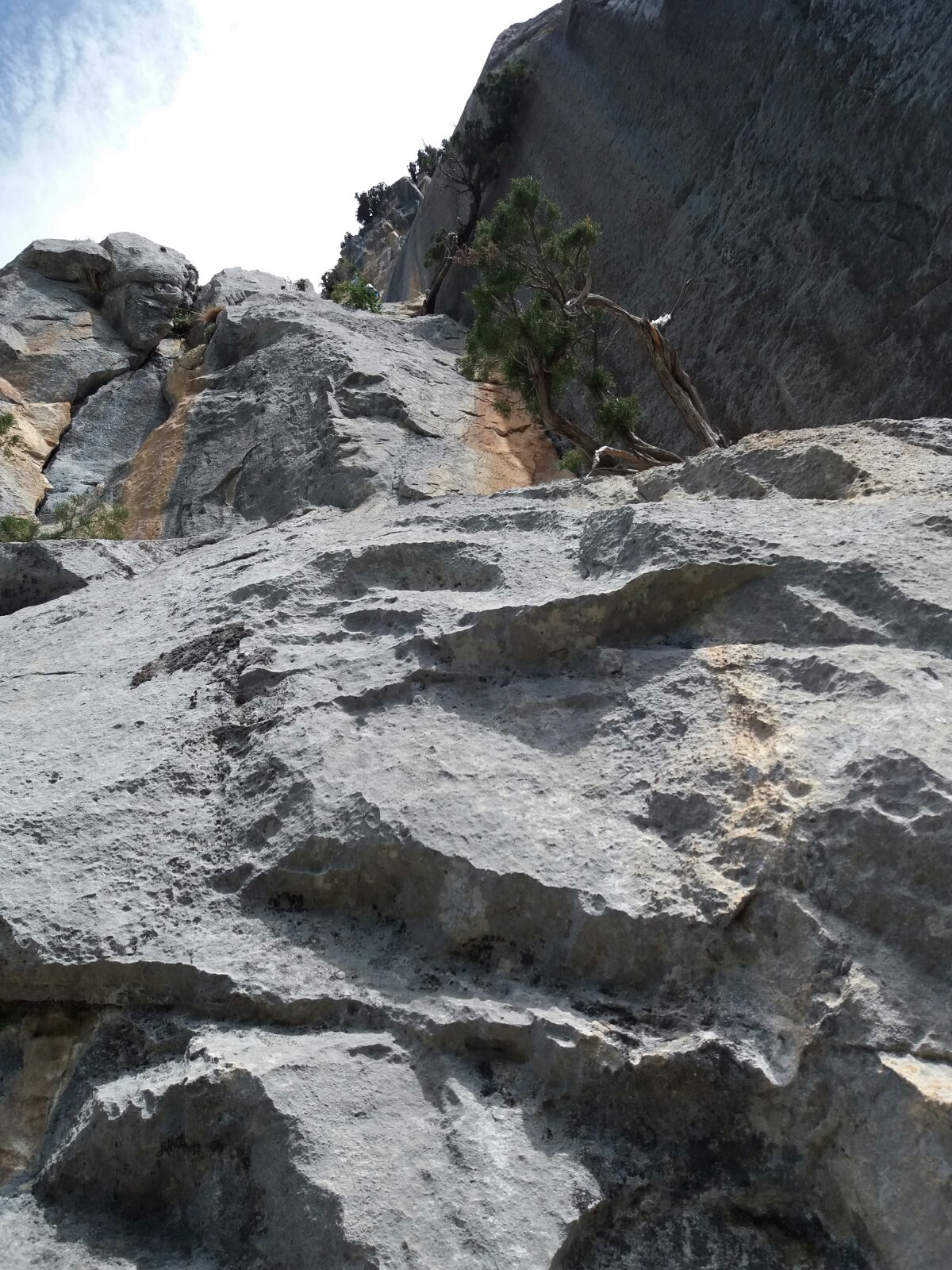 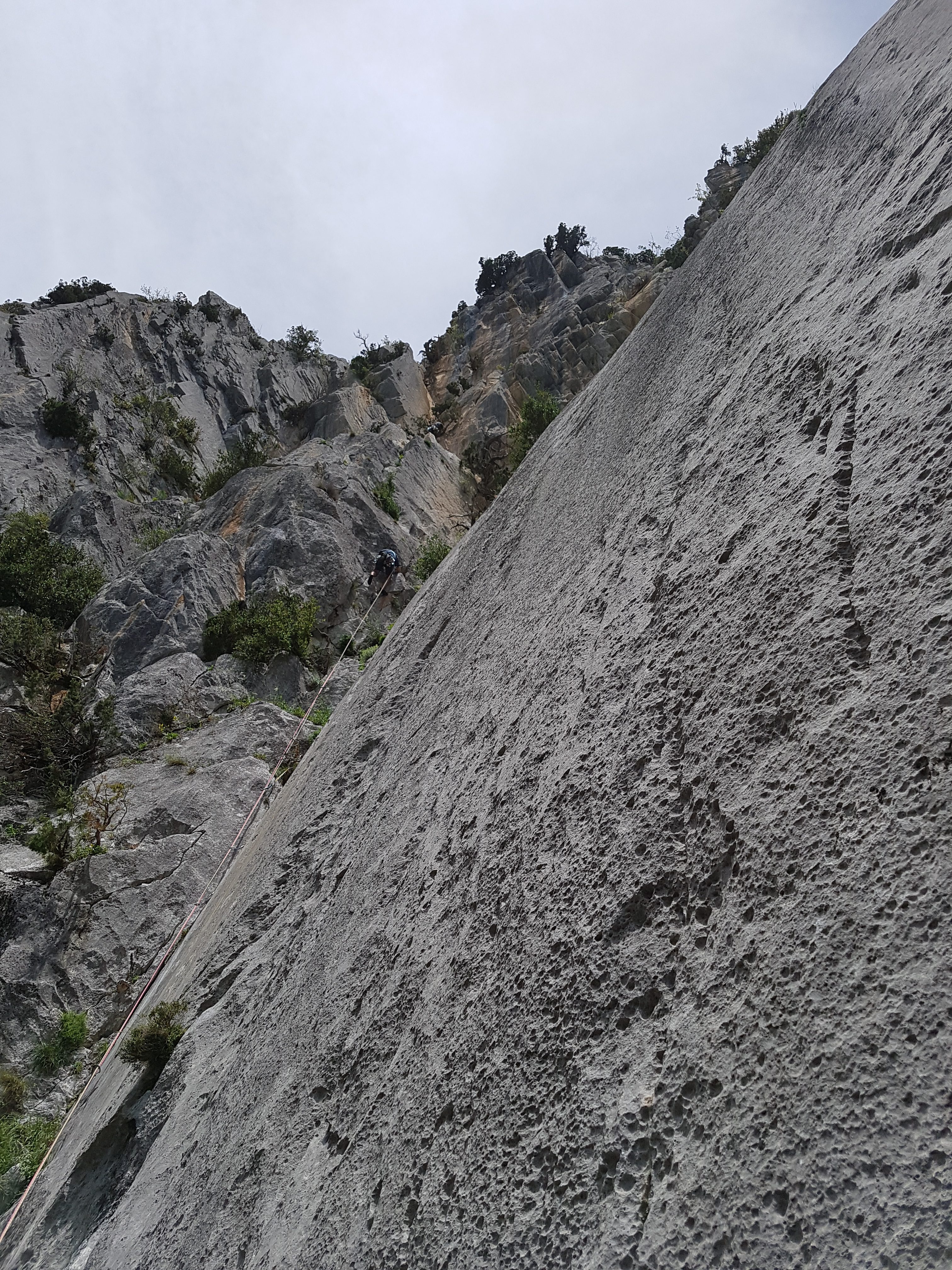 From here on, we only have a V+, significantly easier to climb and to protect and a mini 6a pitch, as well easier that the dihedral pitch. 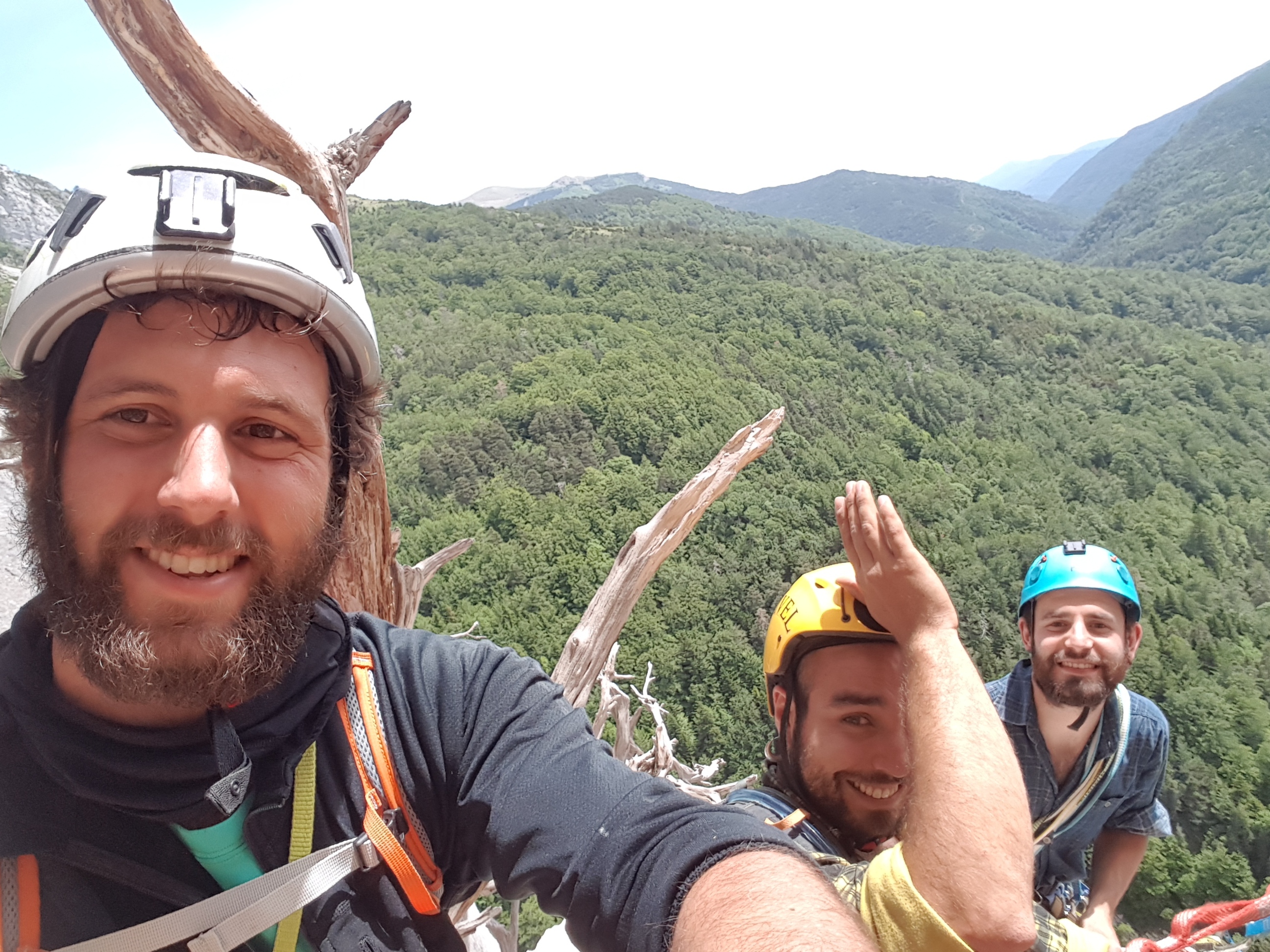 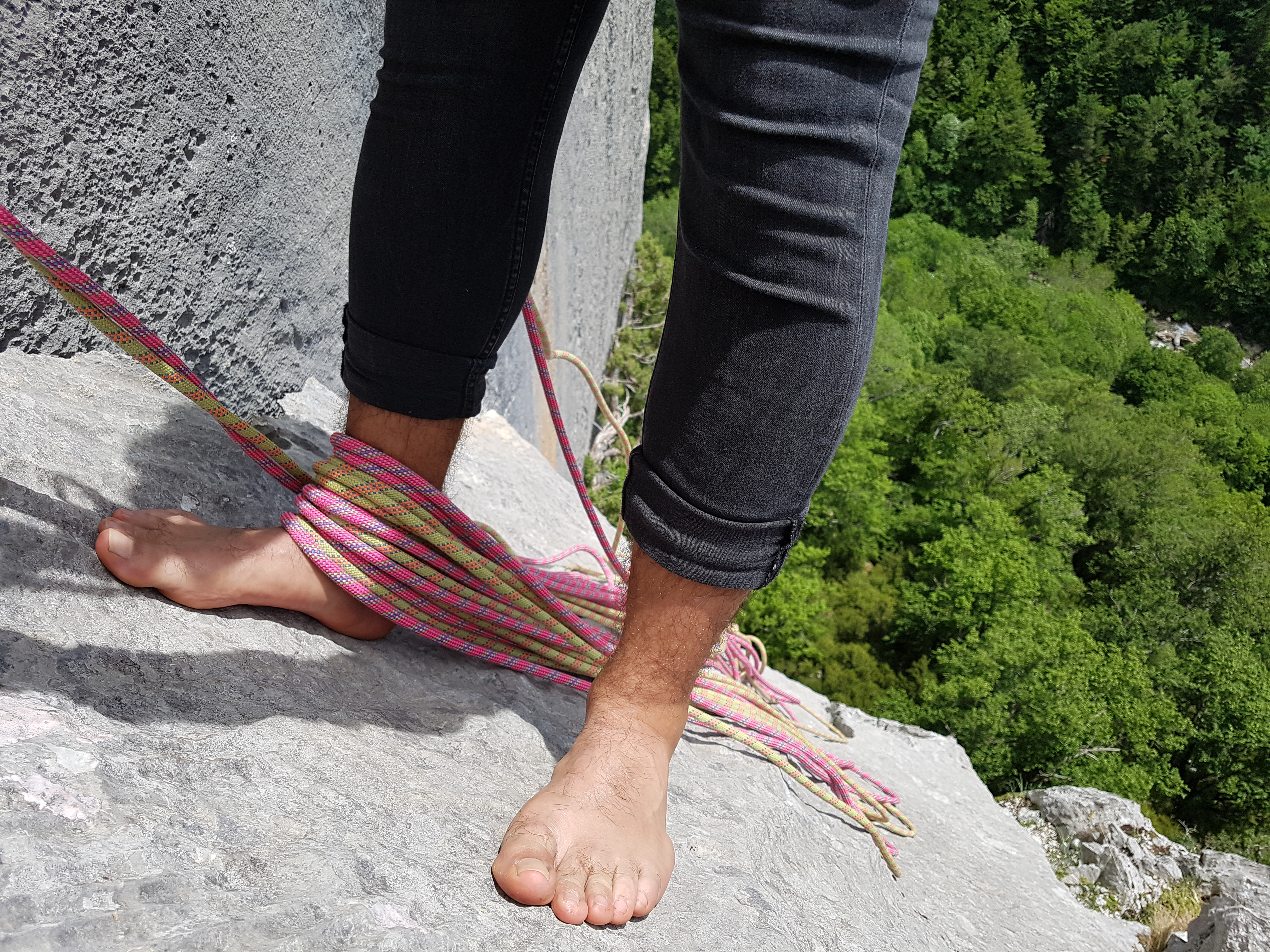 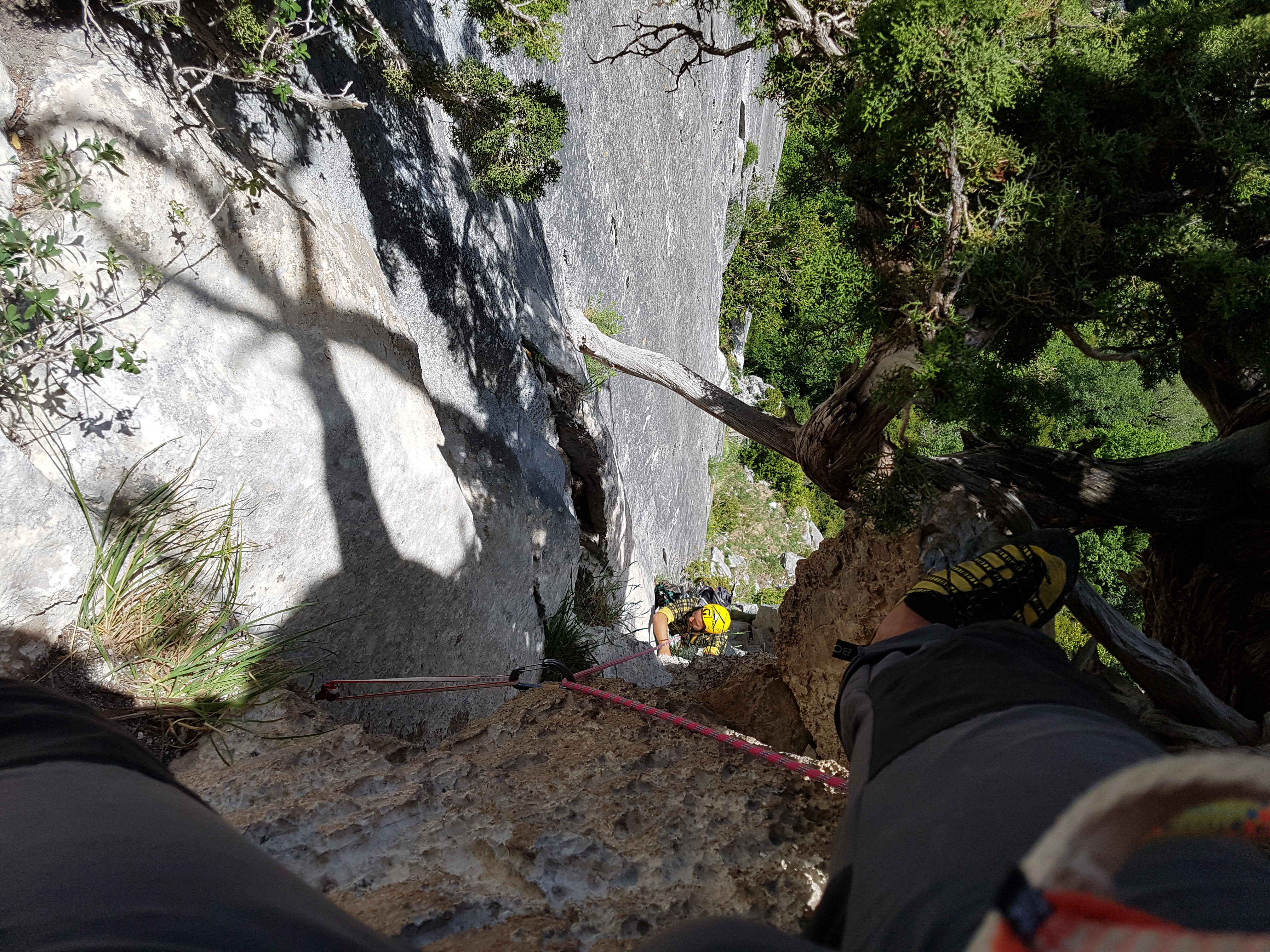 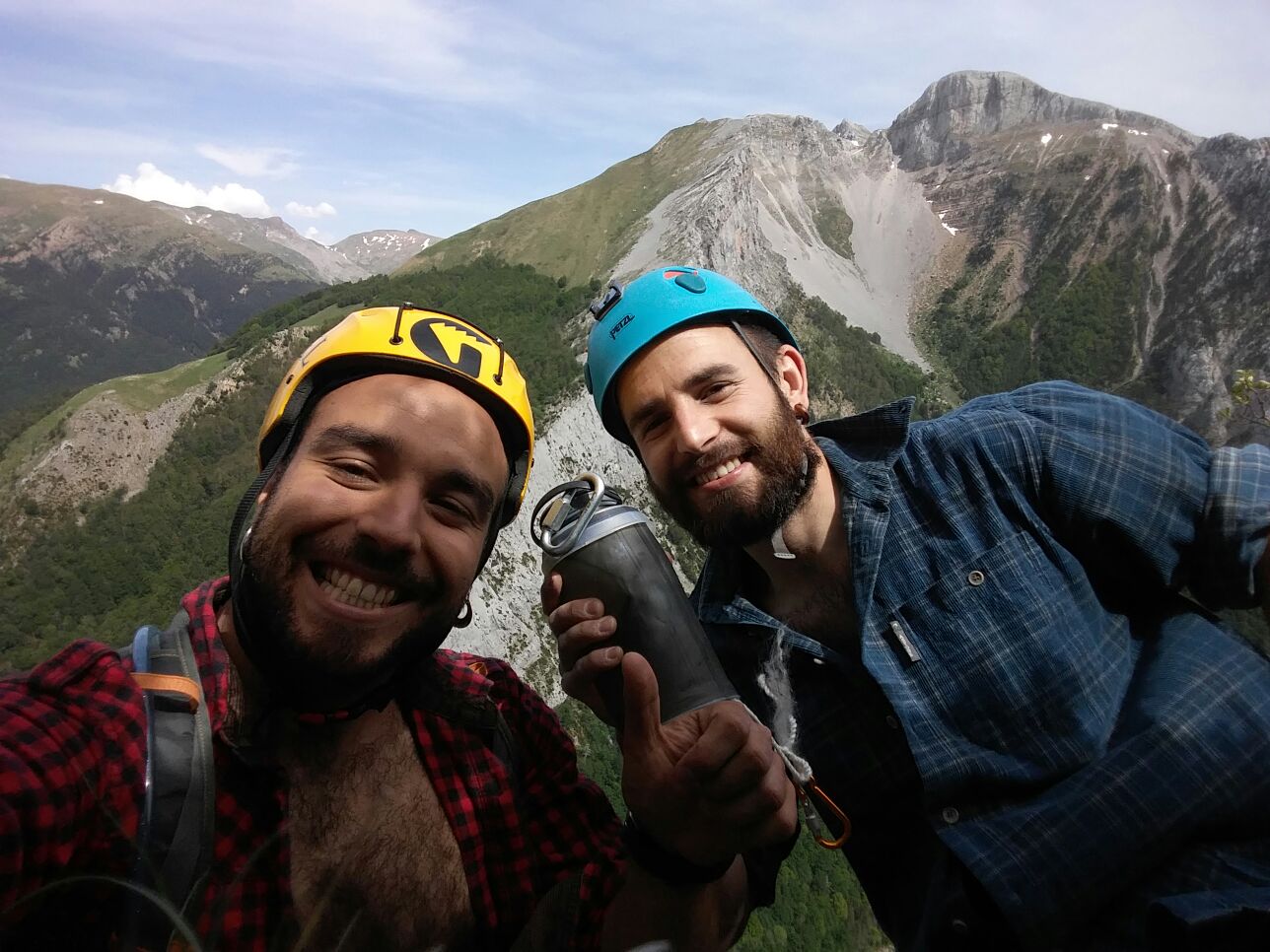 For rappelling down you must be careful and lead the ropes properly to avoid getting dragged out of the line. from the R4  you can rappel all the way to the R2, and from R2 to the ground. However if you are going to go all the way from R4 to R2, you will end up on a piton, on the opposite side of the ledge where the R2 is, so then you will need to do a 4m traverse to reach the rappel where you must be careful. 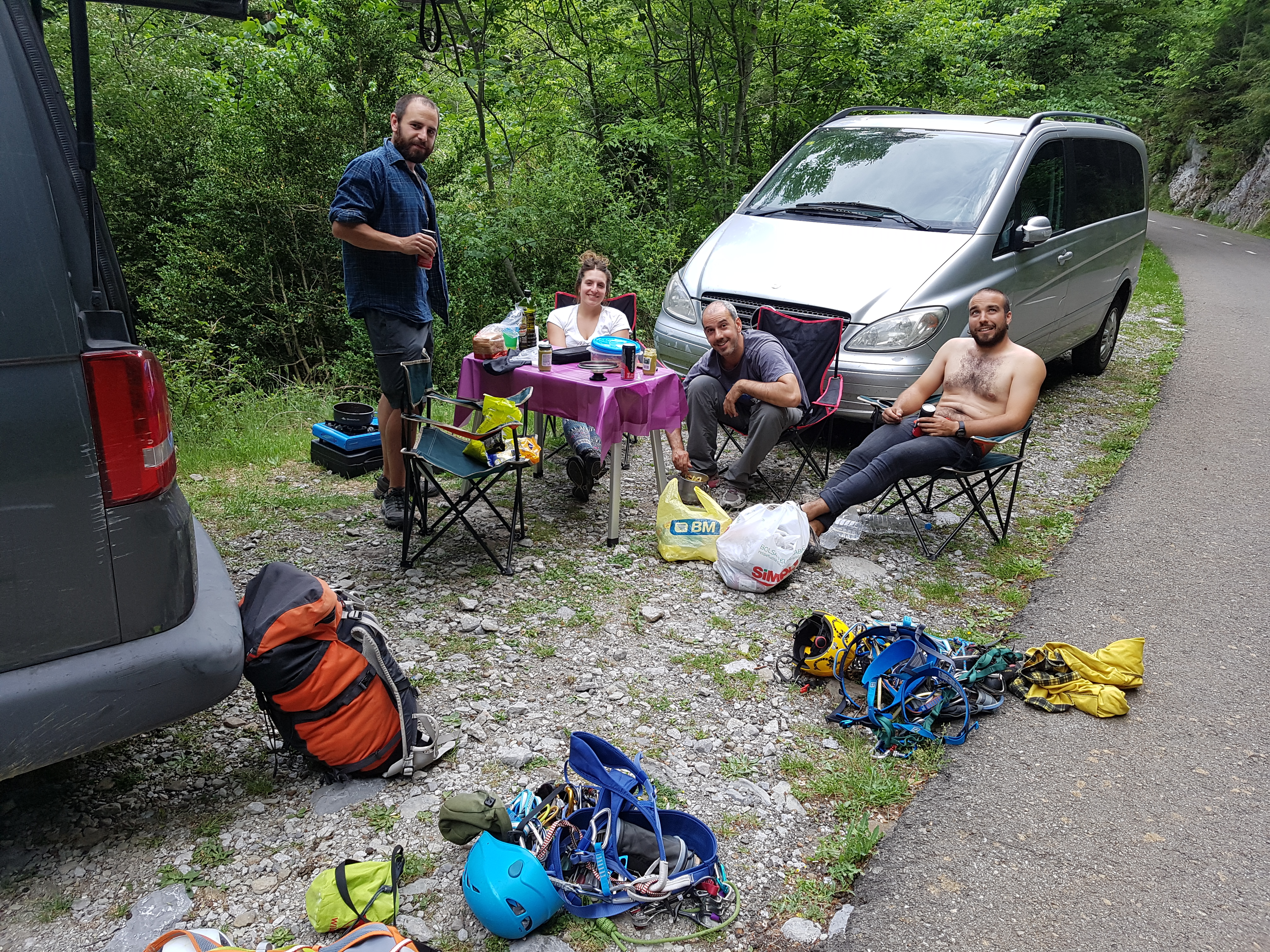 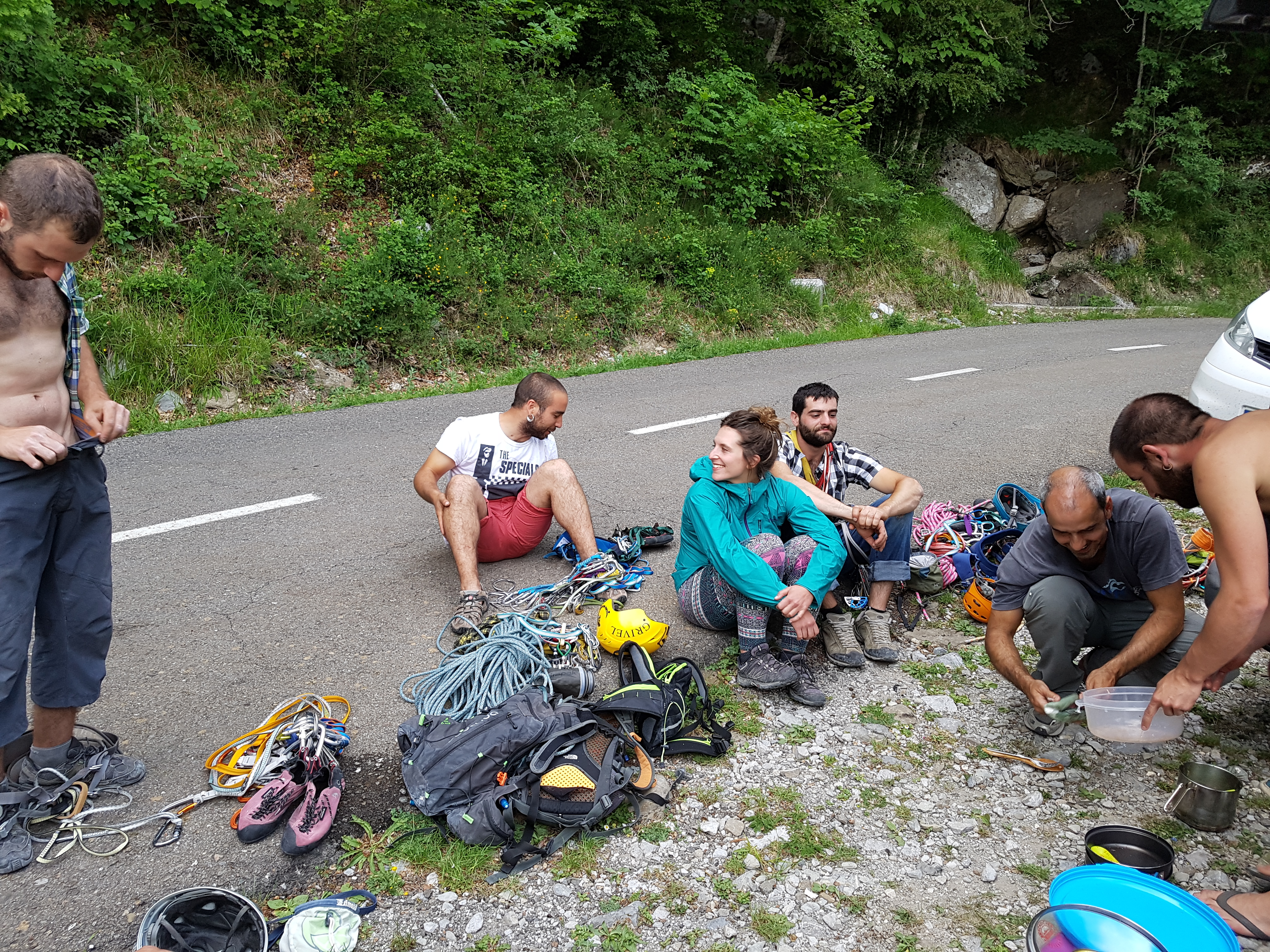 This was a great weekend with two activities that really let you taste the essence of the climbing in  Zuriza.

The landscape is breathtaking, calm and deep in the nature. You can really relax in the valley hiking, bathing in the rivers or just having a siesta in those smooth grass fields.

We really enjoyed the style of the routes, kind of very climby but feeling somehow alpine and the combination of parabolts and trad climbing make it really comfortable and properly framed for progressing in your climbing.

There are loose rocks and you must be careful, but on the dihedrals and walls, the limestone is really good, somehow you get this Picos de Europa feeling. If you feel like heading over there pass by the Zuriza camping, they have all the topos and updated information. There’s a fanatic vibe around and you will get recommended the best activities according to what you are seeking.

Definitely a place worth meeting and to come back.

One thought on “Climbing in Zuriza.”