This weekend we were craving a proper ski alpinism activity. Pablo, as usual, achieved to convince us to go for the NW couloir of Forcanada (Malh de Pois).

I checked a few topos and it seemed slightly more an alpinism line than a ski line. The couloir tends to freeze quite easily, but I guess that’s how ski alpinism works, sometimes you can ski, sometimes you have to rappel down. Rufo was in and it didn’t took much before we got Julen in the mud.

Saturday 5.30a.m alarm clock rings. I pick up Julen and we drive to Artiga de Lin where we meet Pablo and Rufo. By seven we are done gearing up and we start the activity. The first thing we notice is how beautiful is the valley of Artiga de Lin, with the morning light it felt that we were park straight under a glacial moraine. 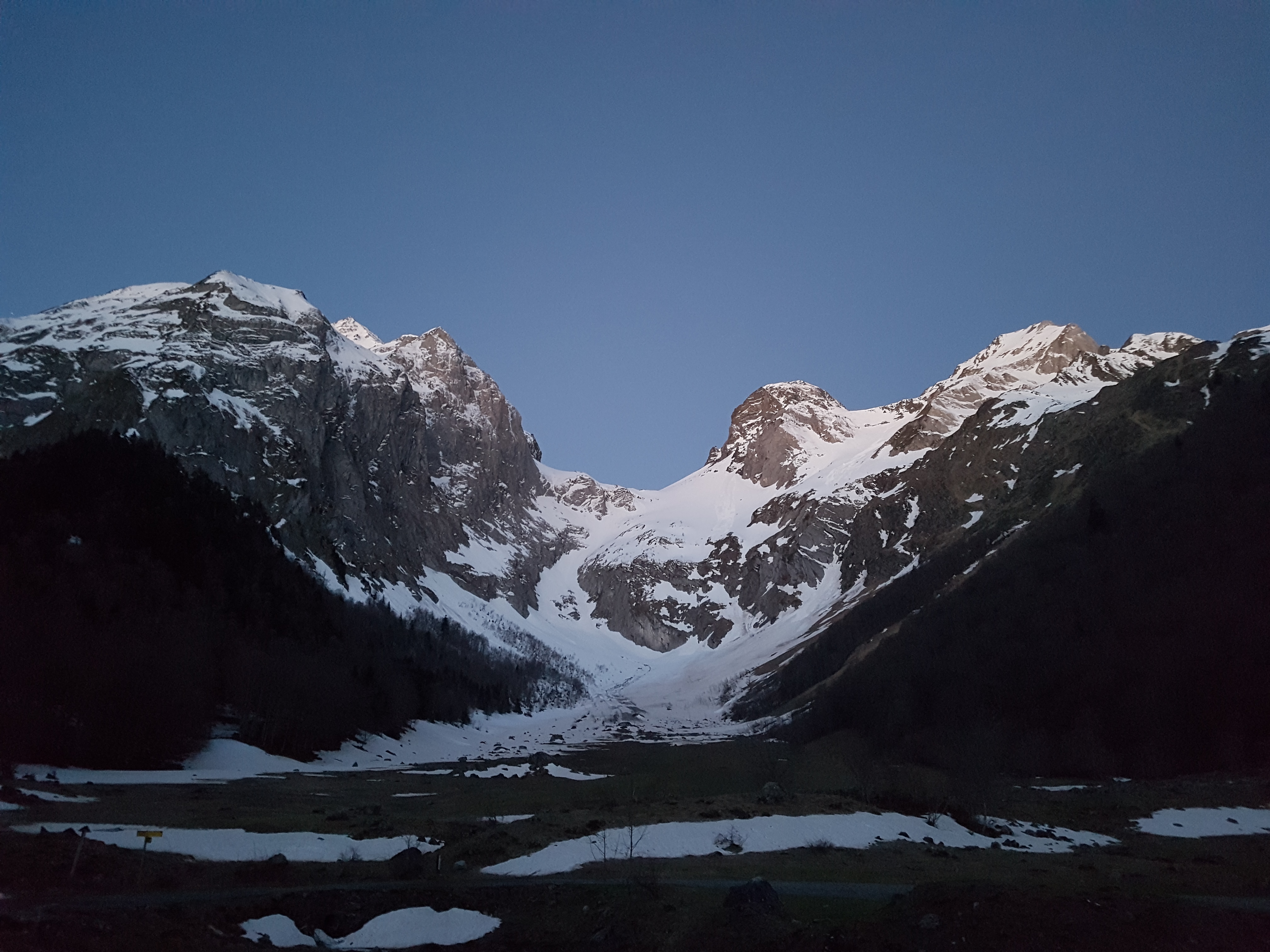 However, this is not our mountain so we head towards the break at the end of the valley. This is no doubt a terrain trap, but everything was already purged. Once on the slope, we notice that it’s actually quite steep and the ski crampons have a hard time biting on that snow. We probably should have cramponed up, as Pablo did, but still it was a struggle for him. At that point we realised that this mountain was going to be a fight at every single meter of it.Straight after the first break, there is another one but slightly shorter and easier. Then you get inside a constant gully slightly steep.

Towards the end of the gully the Forcanada appears out of a sudden shining in the sun. 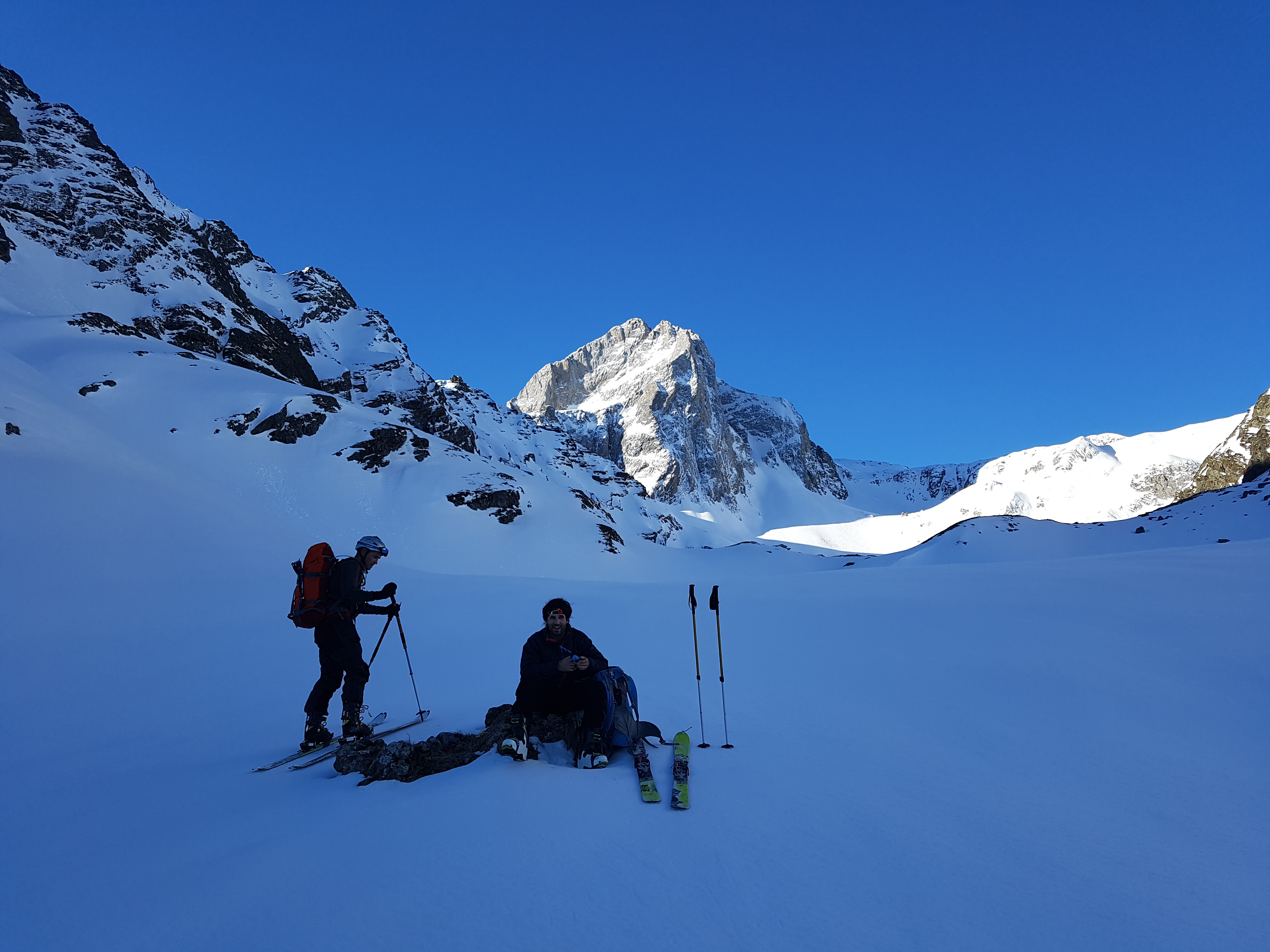 It is impressive. What a piece of rock! At that time, we start to think that if we got our ass slightly kicked with the first break, that rock was going to be a hell of a business. From that point on to the feet of the mountain it’s all straightforward terrain over a lake, so we finally can do some fast progress and get straight under the N face. 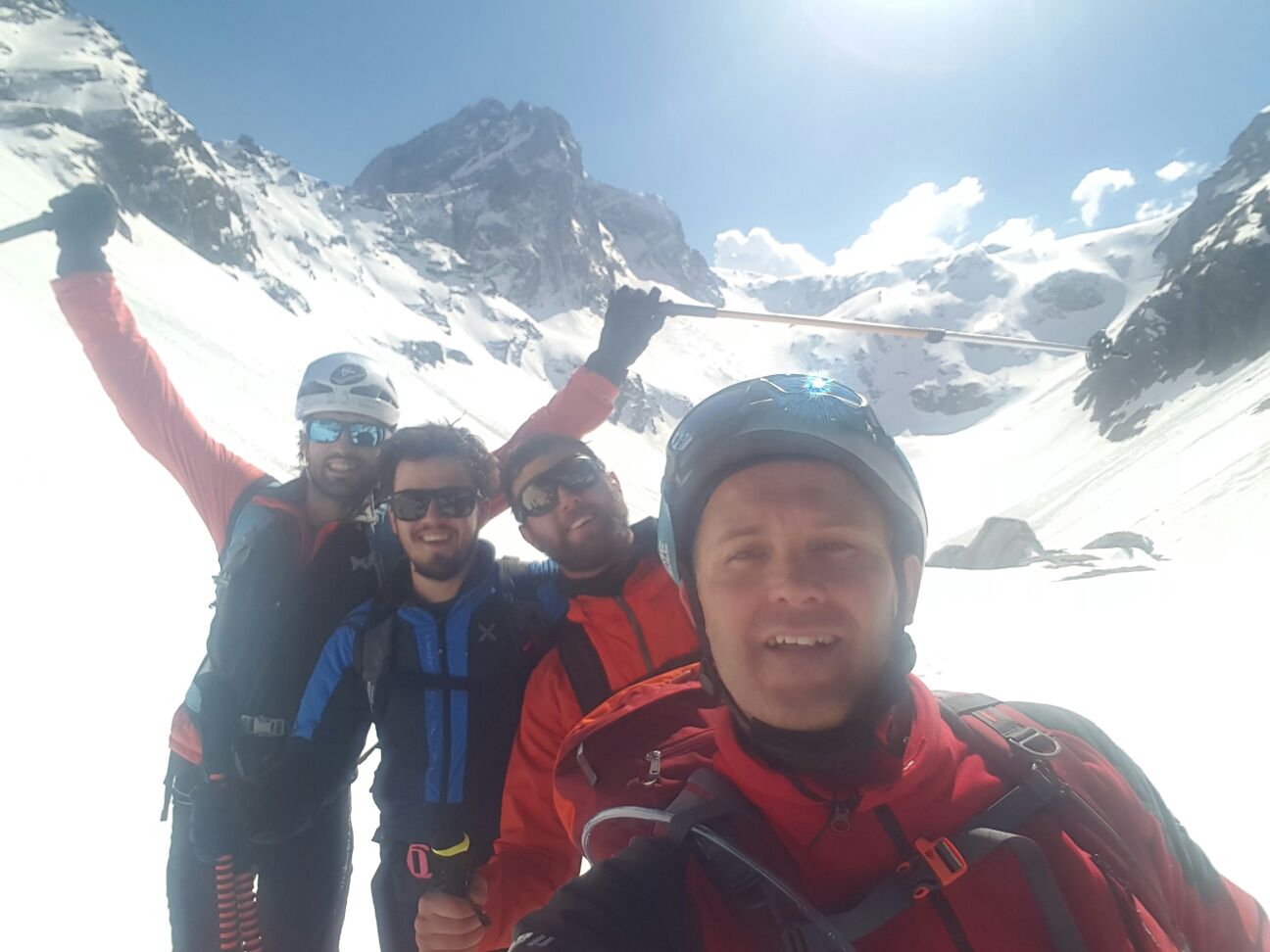 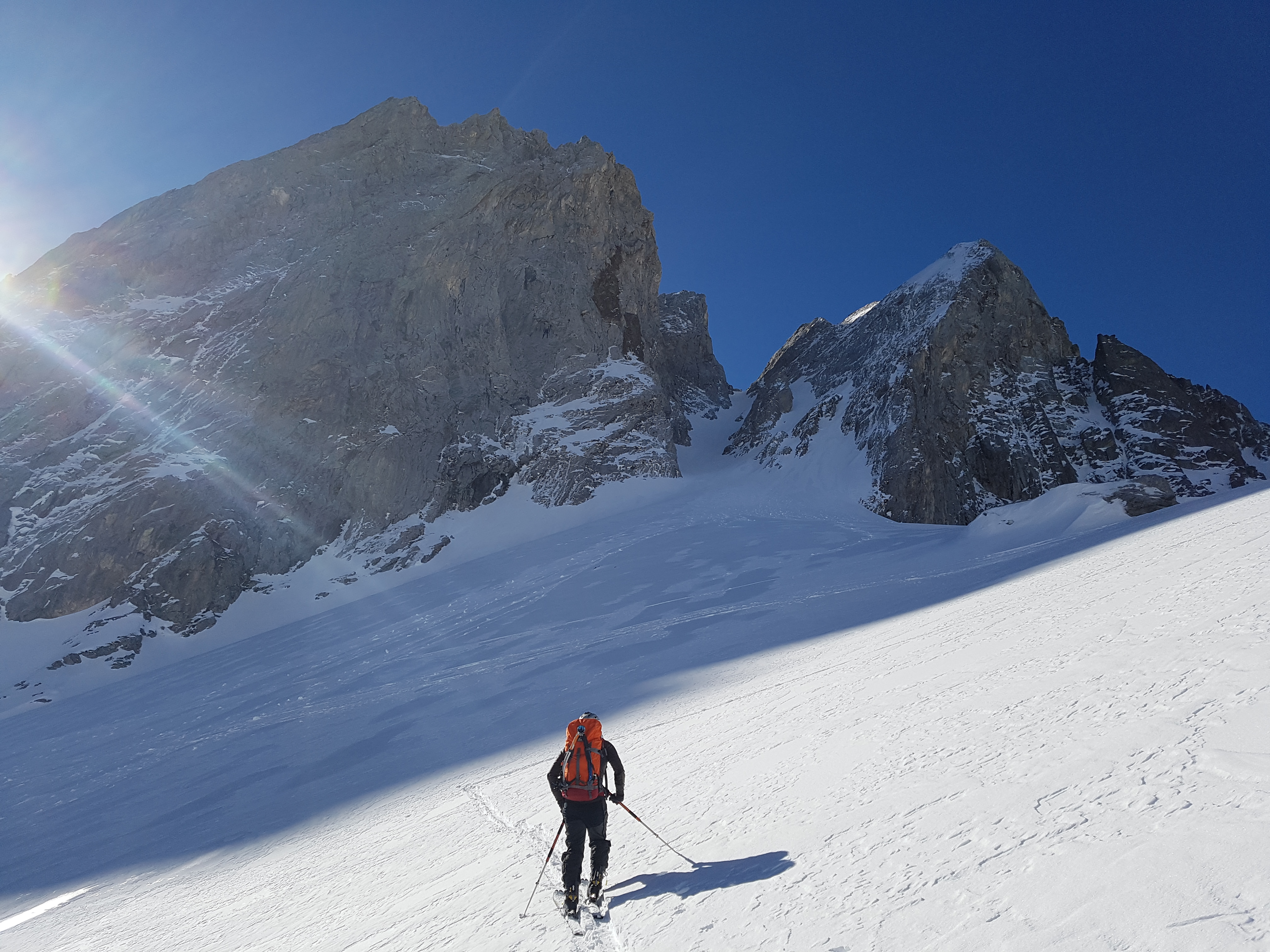 As soon as we gain altitude we start to get a glimpse of the entrance of the couloir. Now we can finally see properly the couloir and get all excited. Such a powerful line! 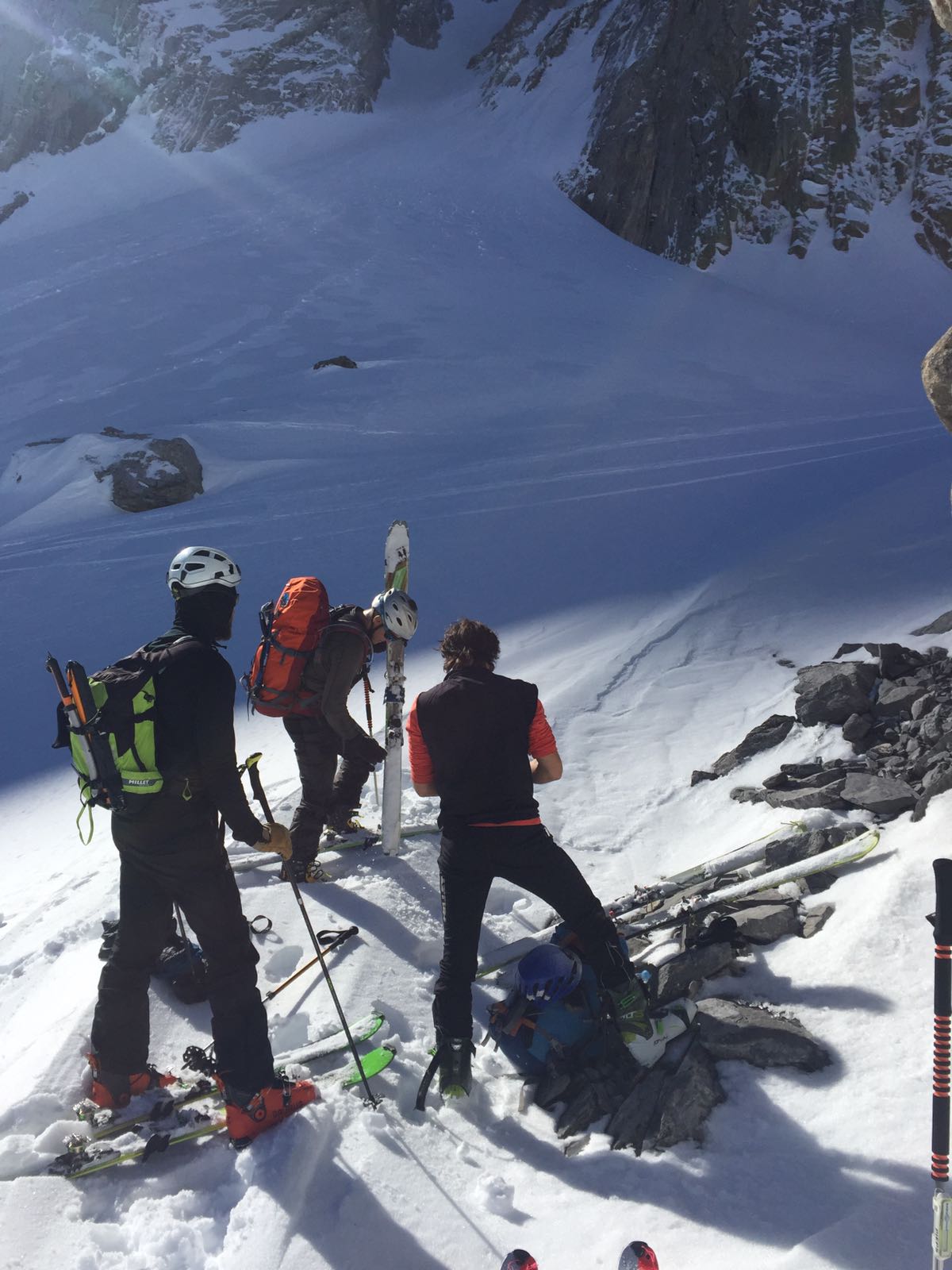 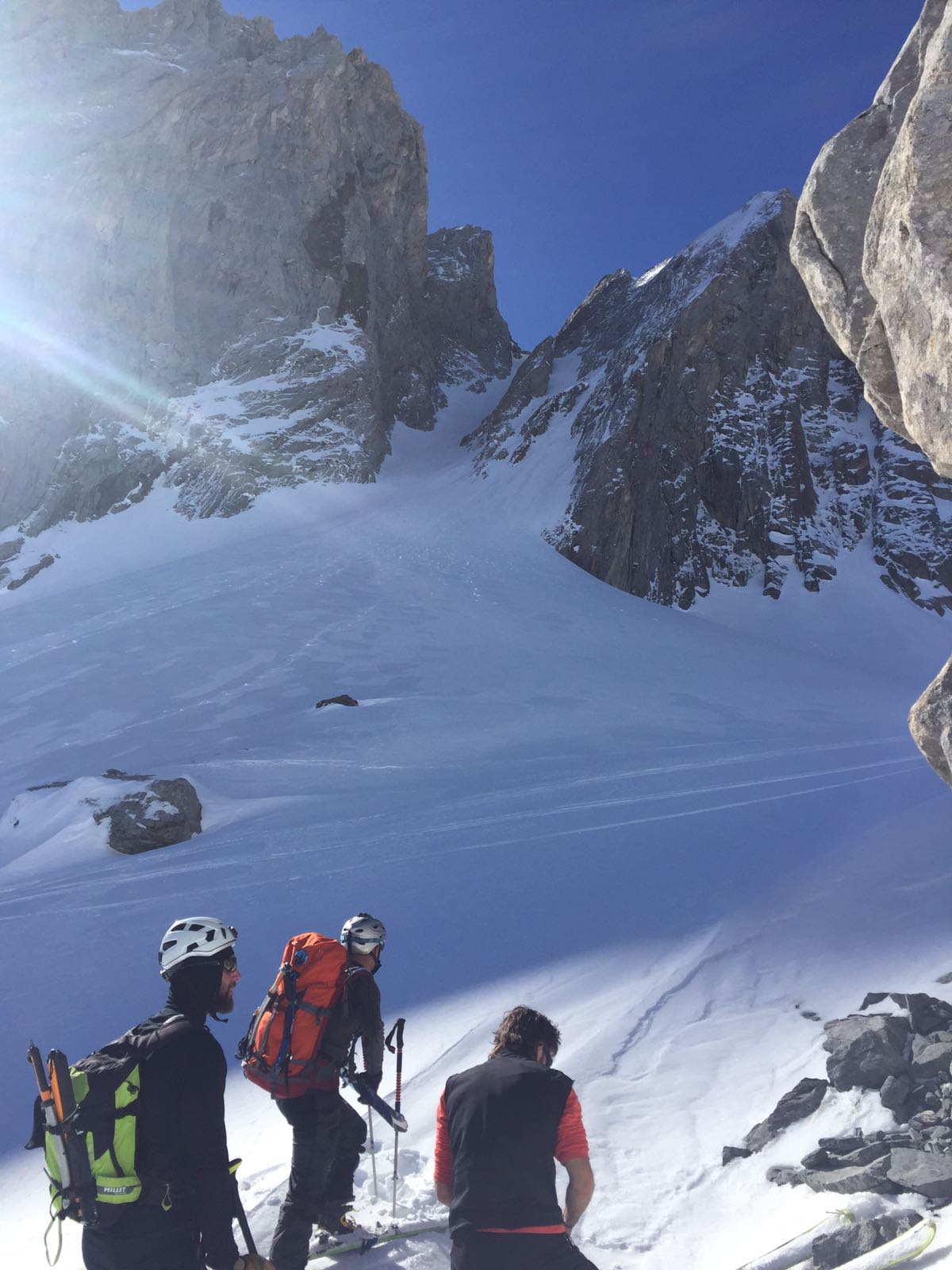 So beautiful and such great conditions. Wide, well covered, apparently good snow… What started as an alpinism day suddenly seemed that it could turn into an epic ski day. We ate a few power bars and got to business. The idea is progressing on kick turns as high as we can and then get the crampons on for the last 45º slope. 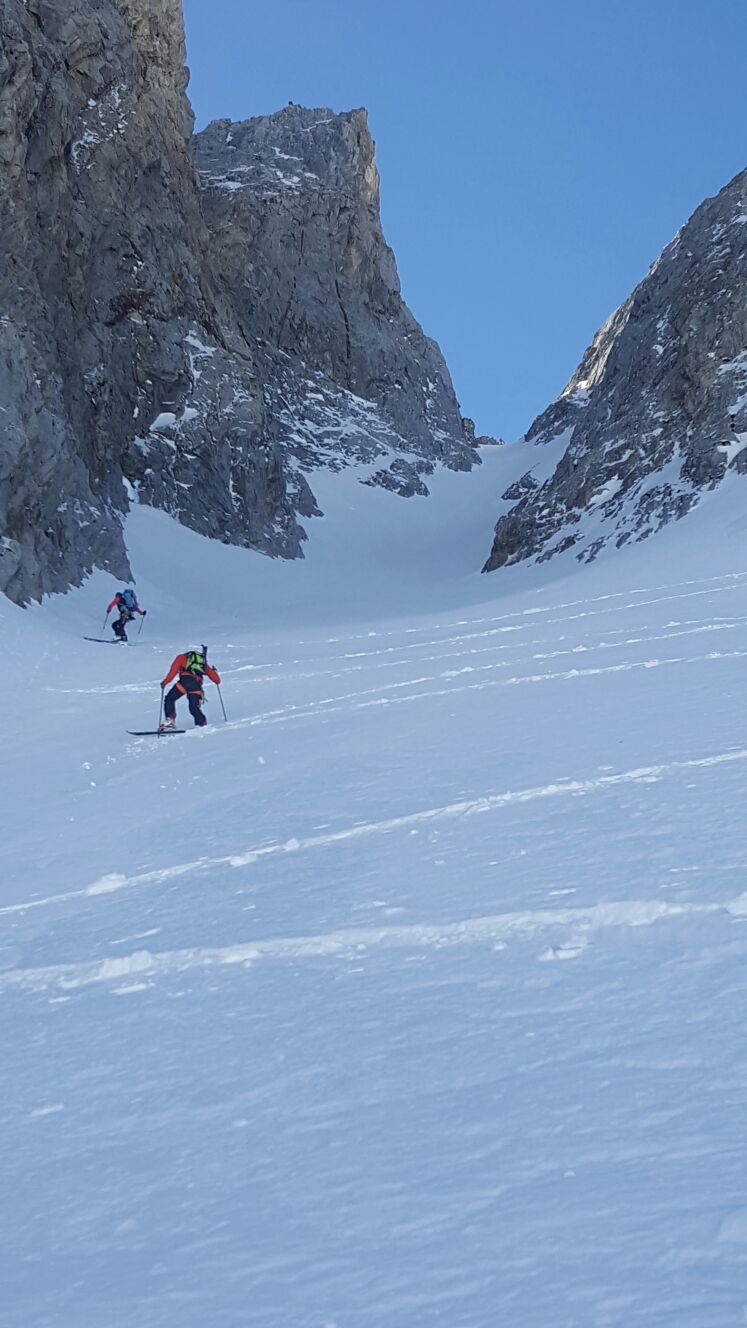 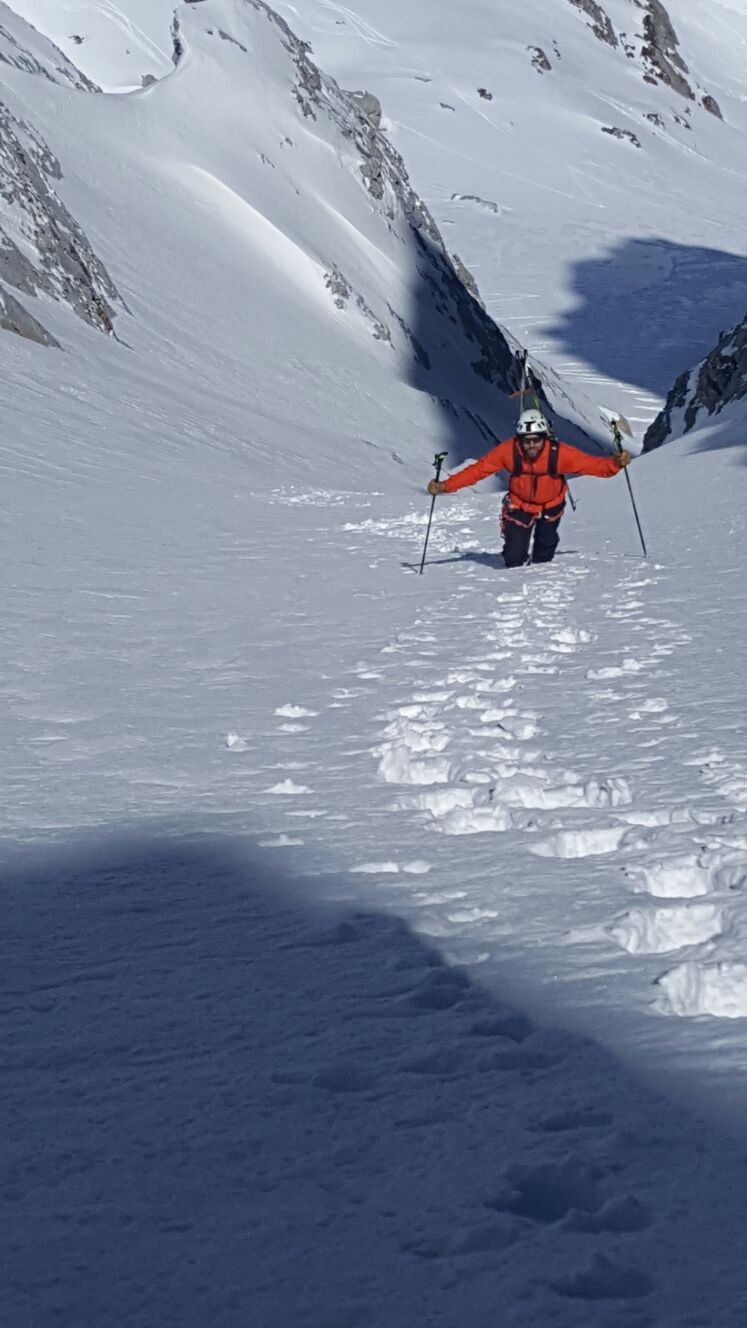 This is starting to turn into the Z festival. What a sufferfest. Rufo breaking track like a train, julen following closely meanwhile Pablo and me dragging our heavy asses a few quick turns back. 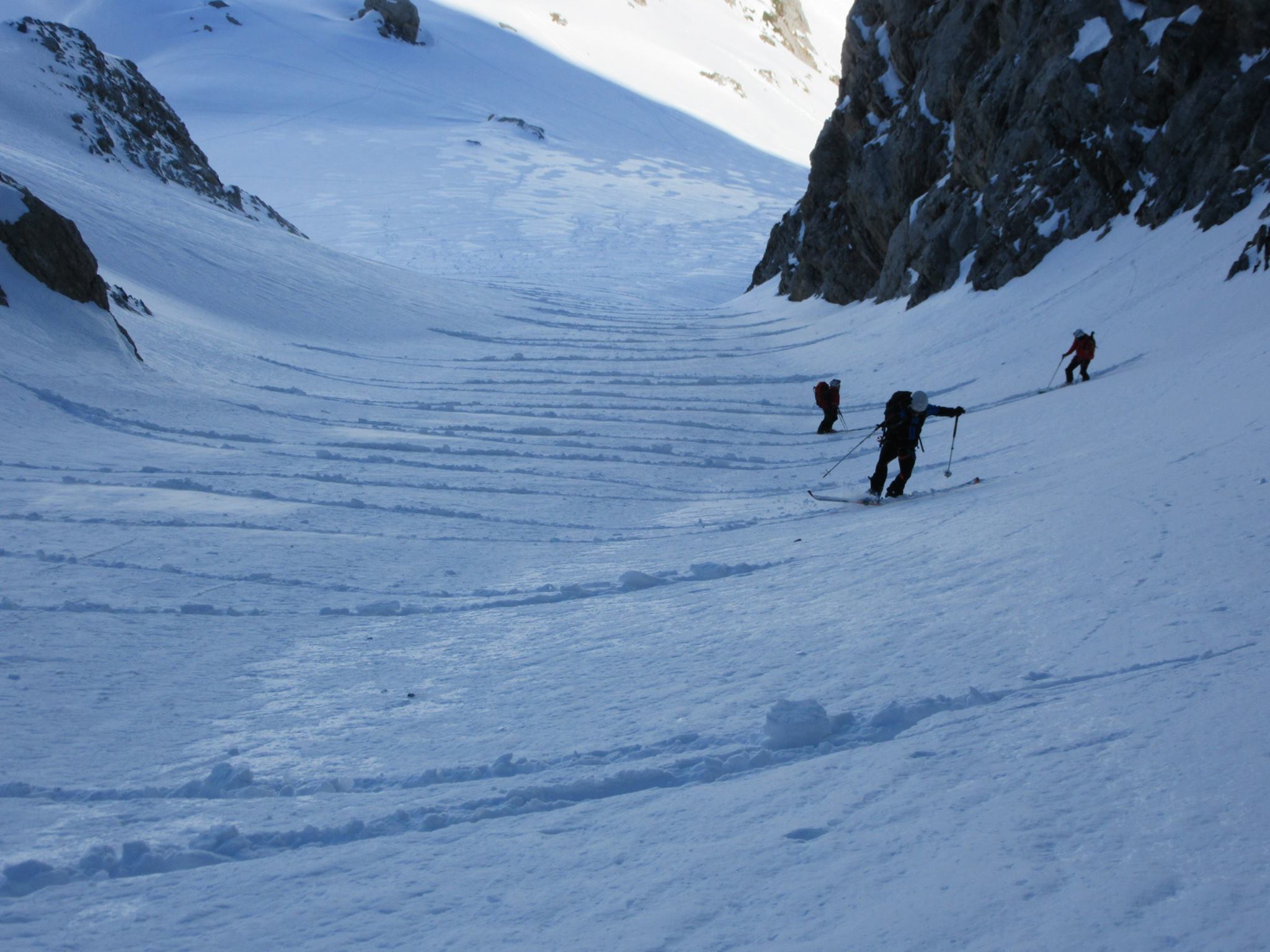 After some hundred kick turns, and really pushing the last ones to the limit, we get the crampons on and reach the col shortly after. At this point we really feel like ditching the summit and drop on the powder; however a man has to do what a man has to do. We leave the skis and backpacks on the col, grab our ice axe and for the summit. 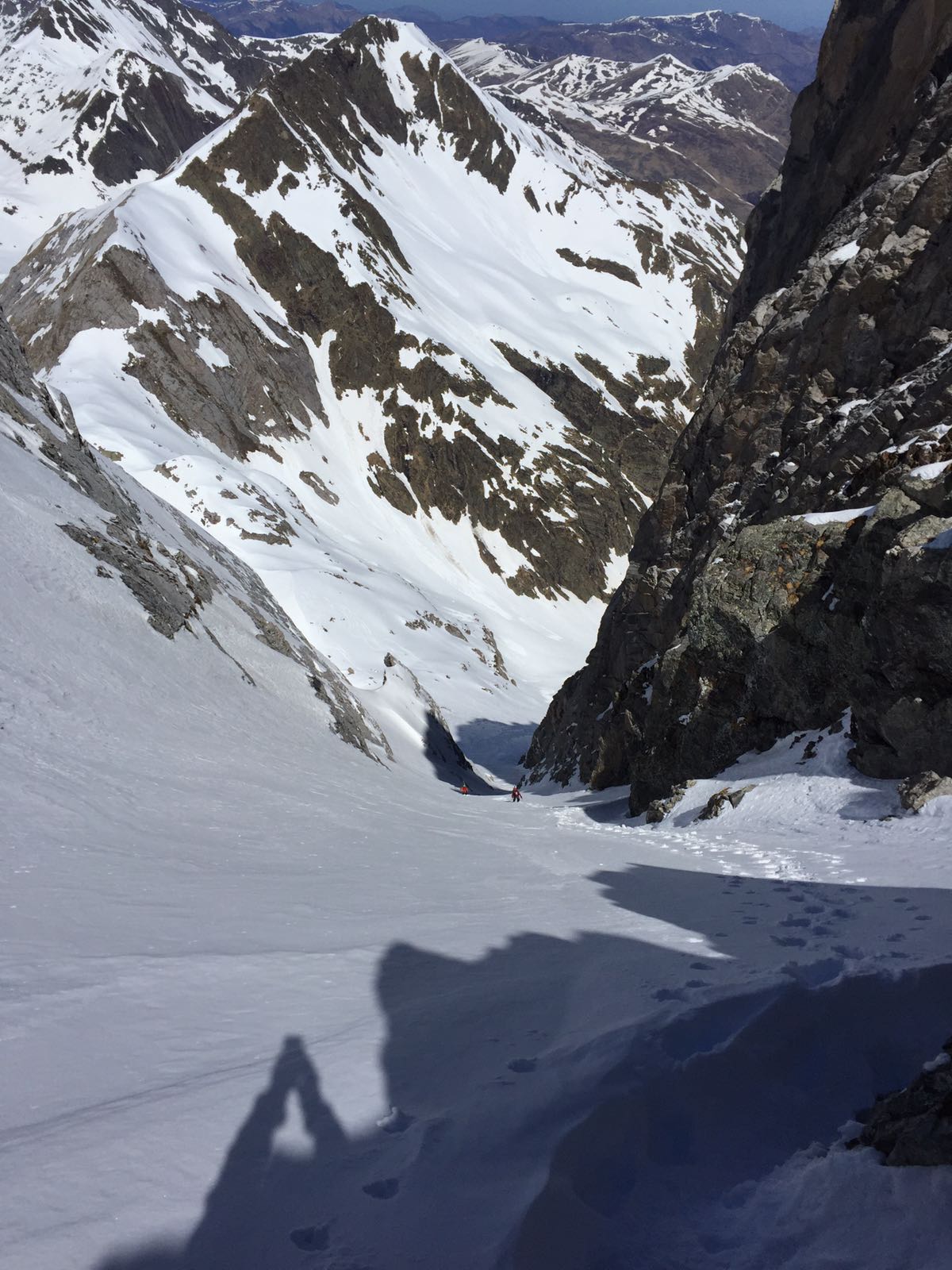 There is still a lot of mountain left through mixed terrain. Even though the slopes and difficulties are pretty manageable, there is a lot of loose rock and you need to be very careful. At first Julen is not fully confident with this scramble, so he ropes on with Rufo and they get to the summit in about half of the time than Pablo, myself and our heavy asses. Summit selfie then start to down climb and rappel to the col. 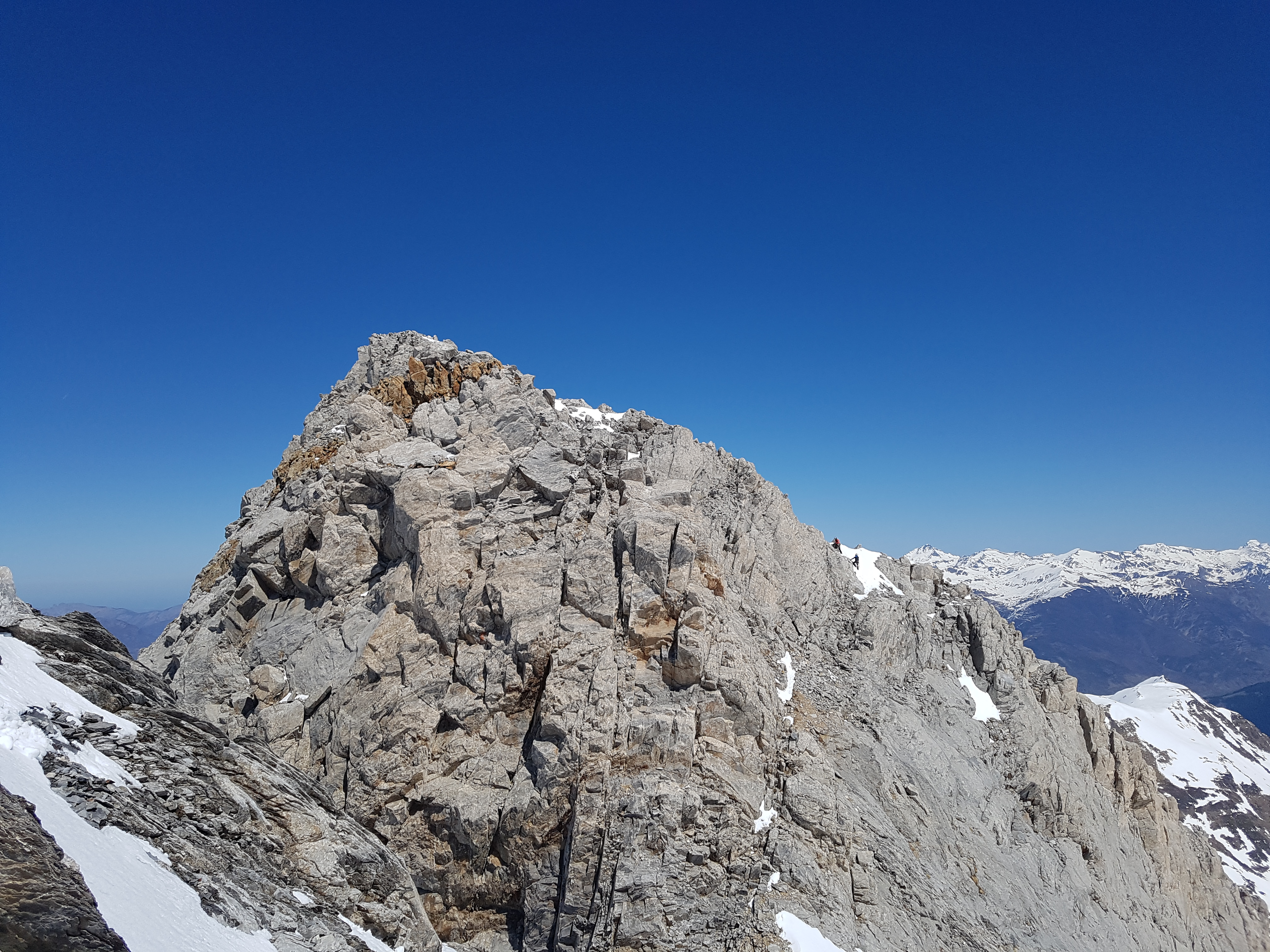 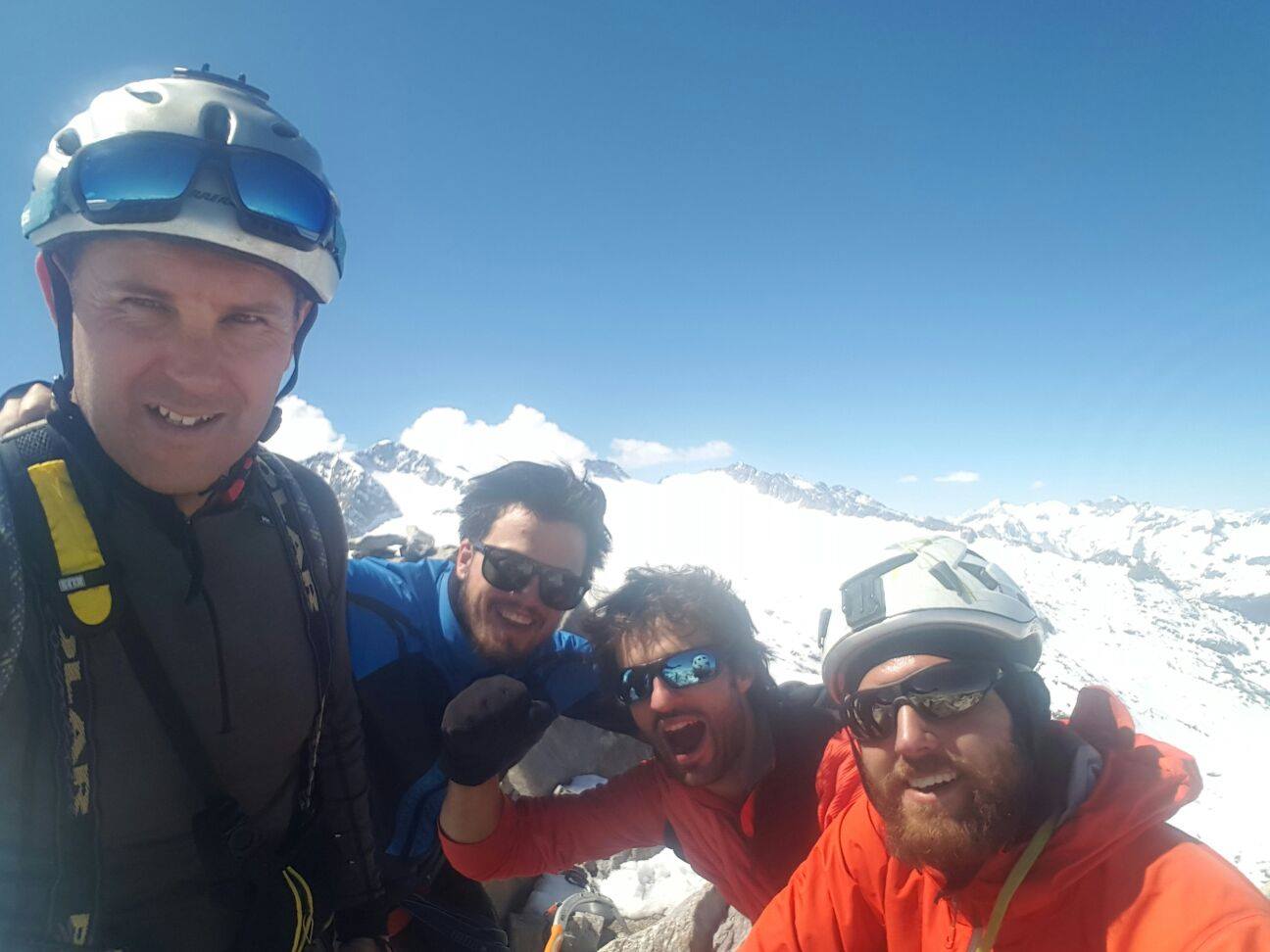 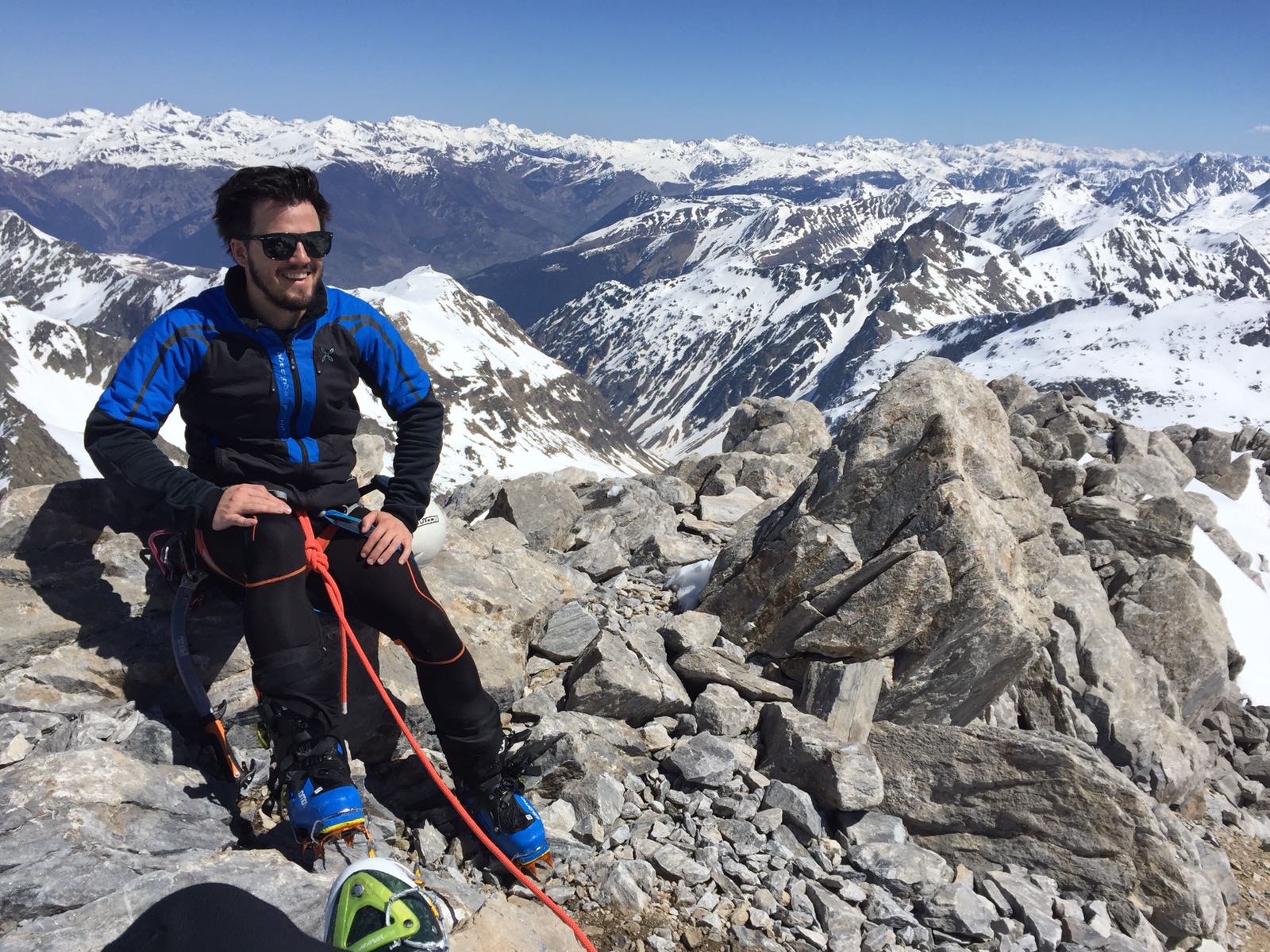 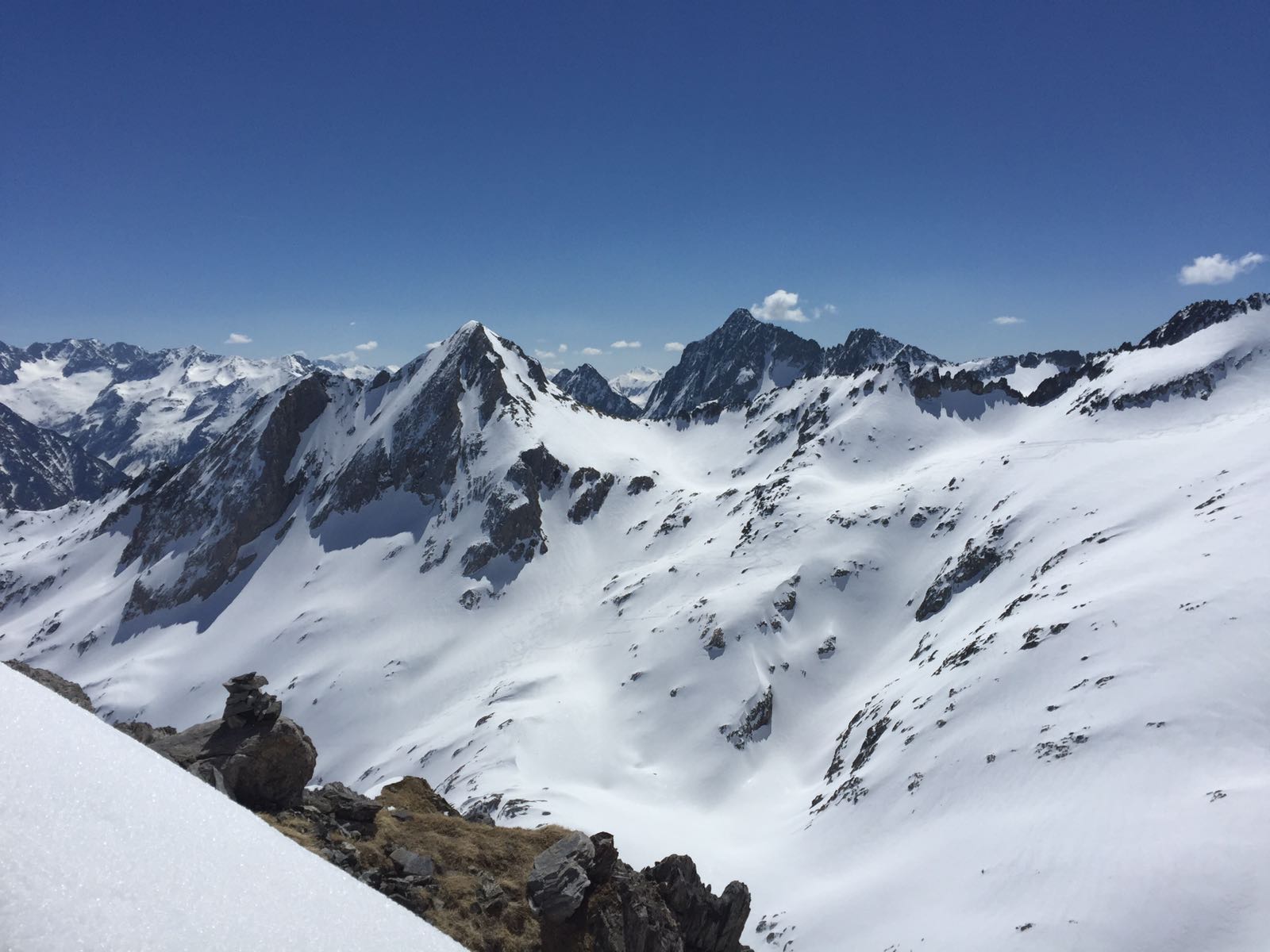 Last snack break and rock n’ roll. The couloir is rated as S5, but with so much snow and such powdery conditions it was a really enjoyable ride.

ONTHEBELAY  About avalanches and Mountain safety. Practical cases through video and images on a big day of pow. 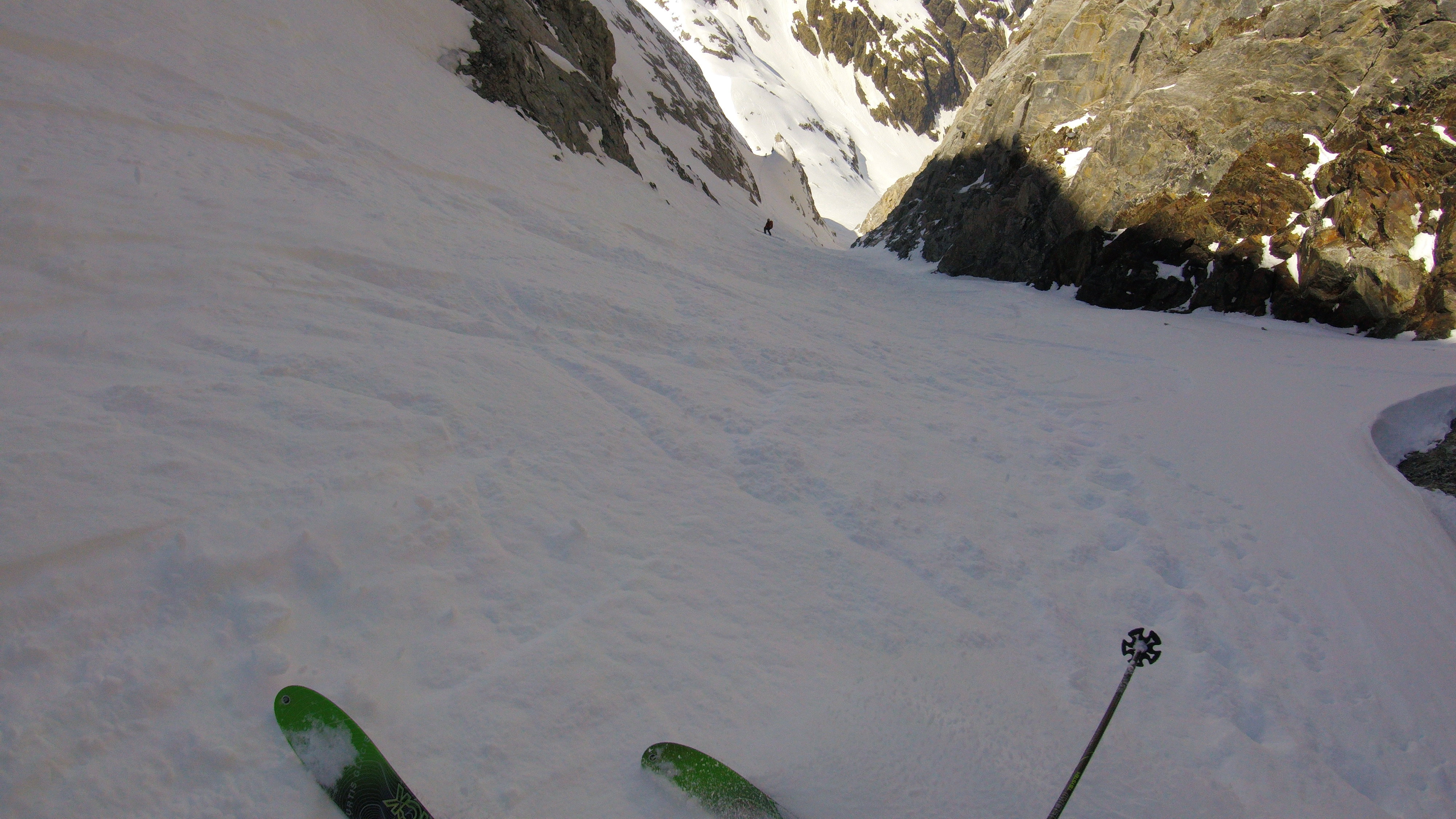 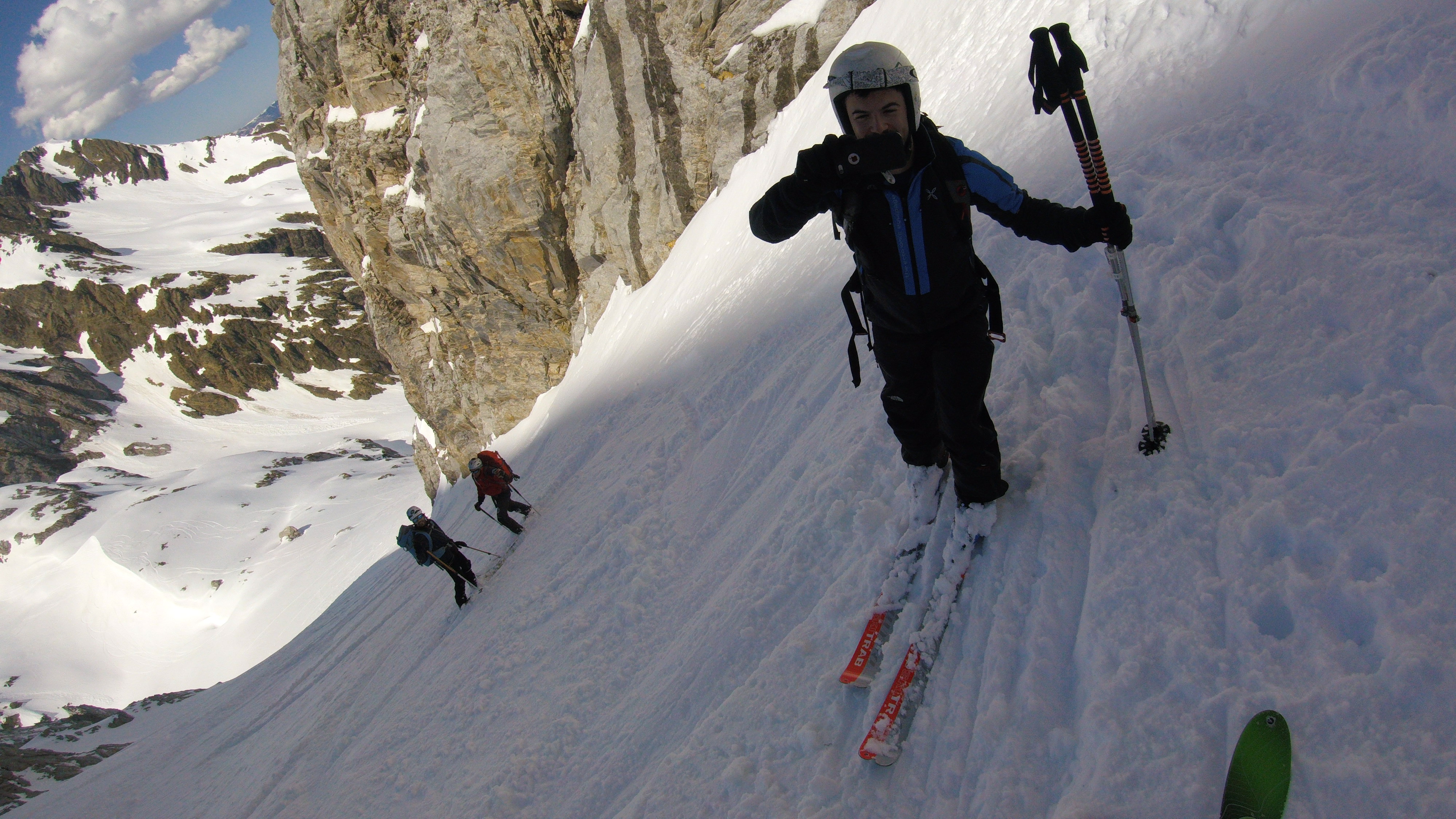 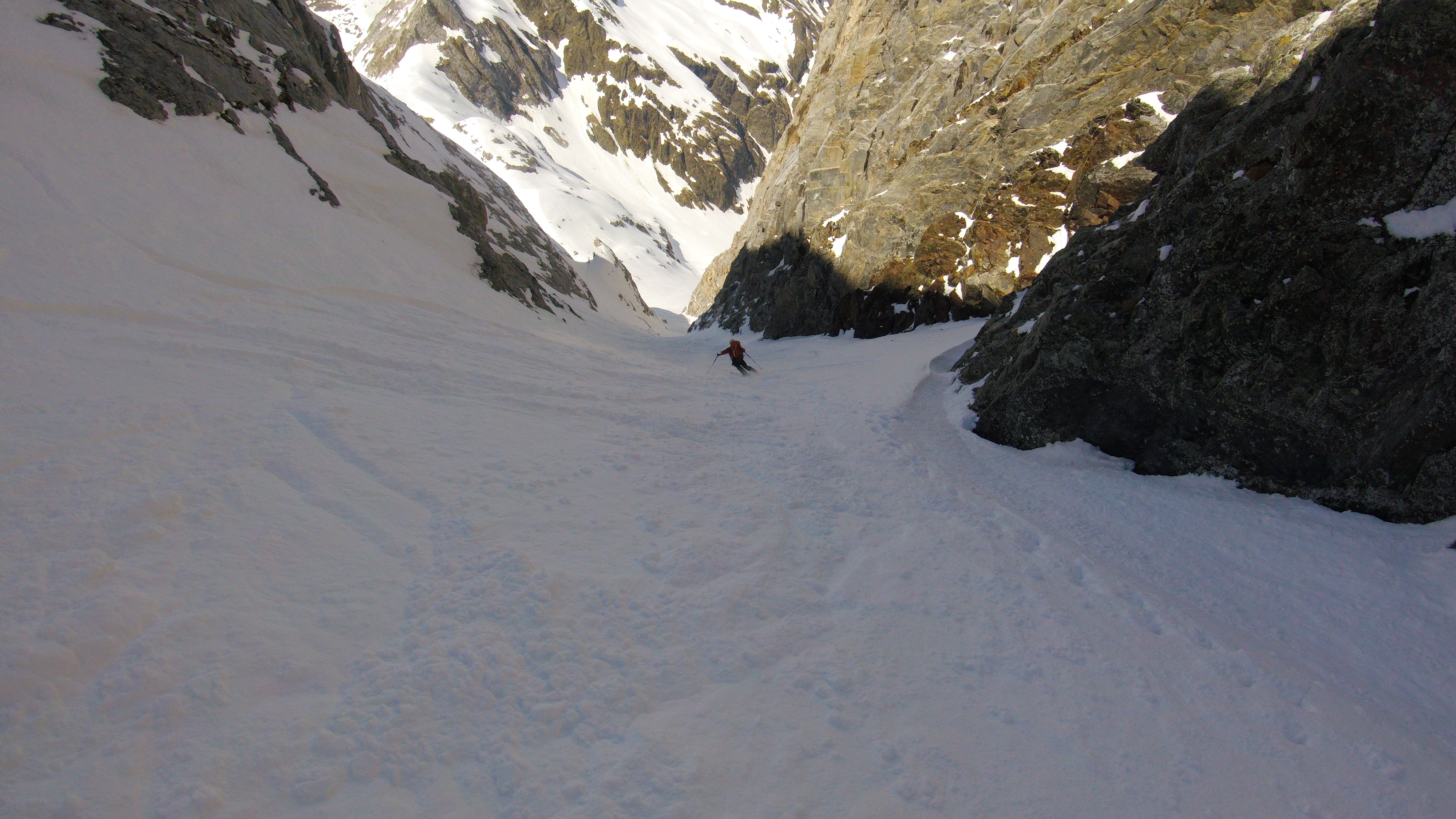 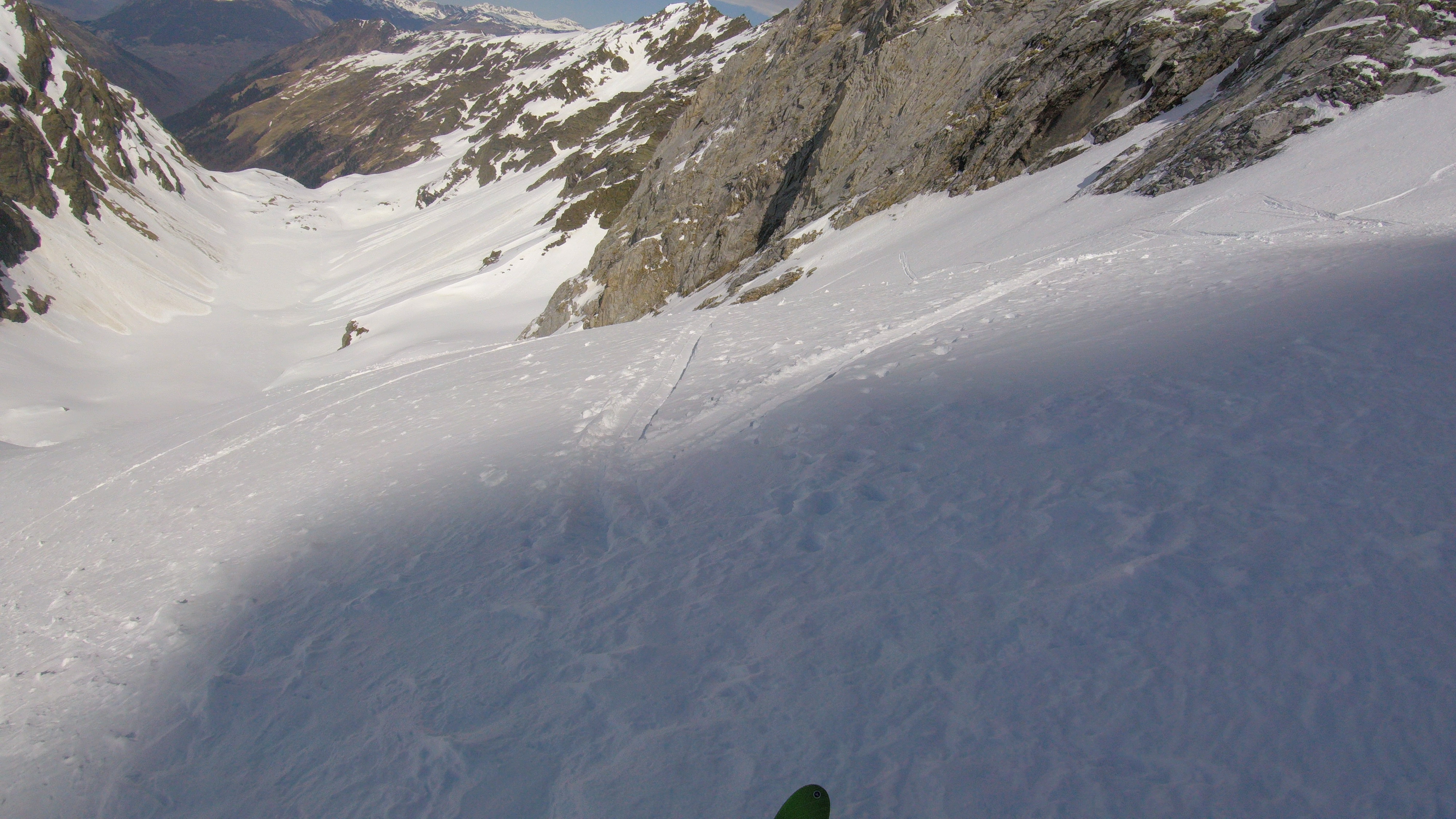 The slope straight after the couloir is pure happy riding. 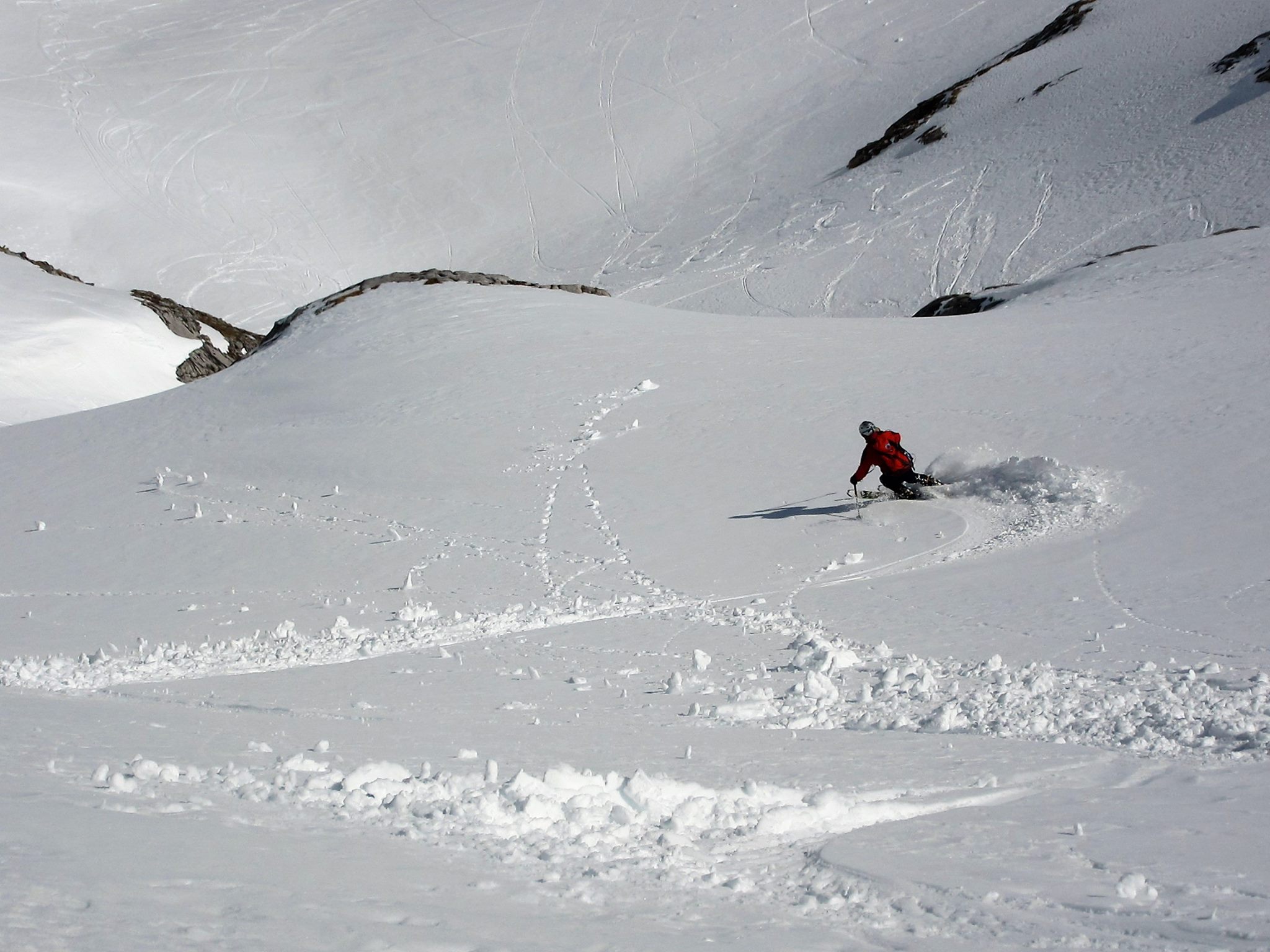 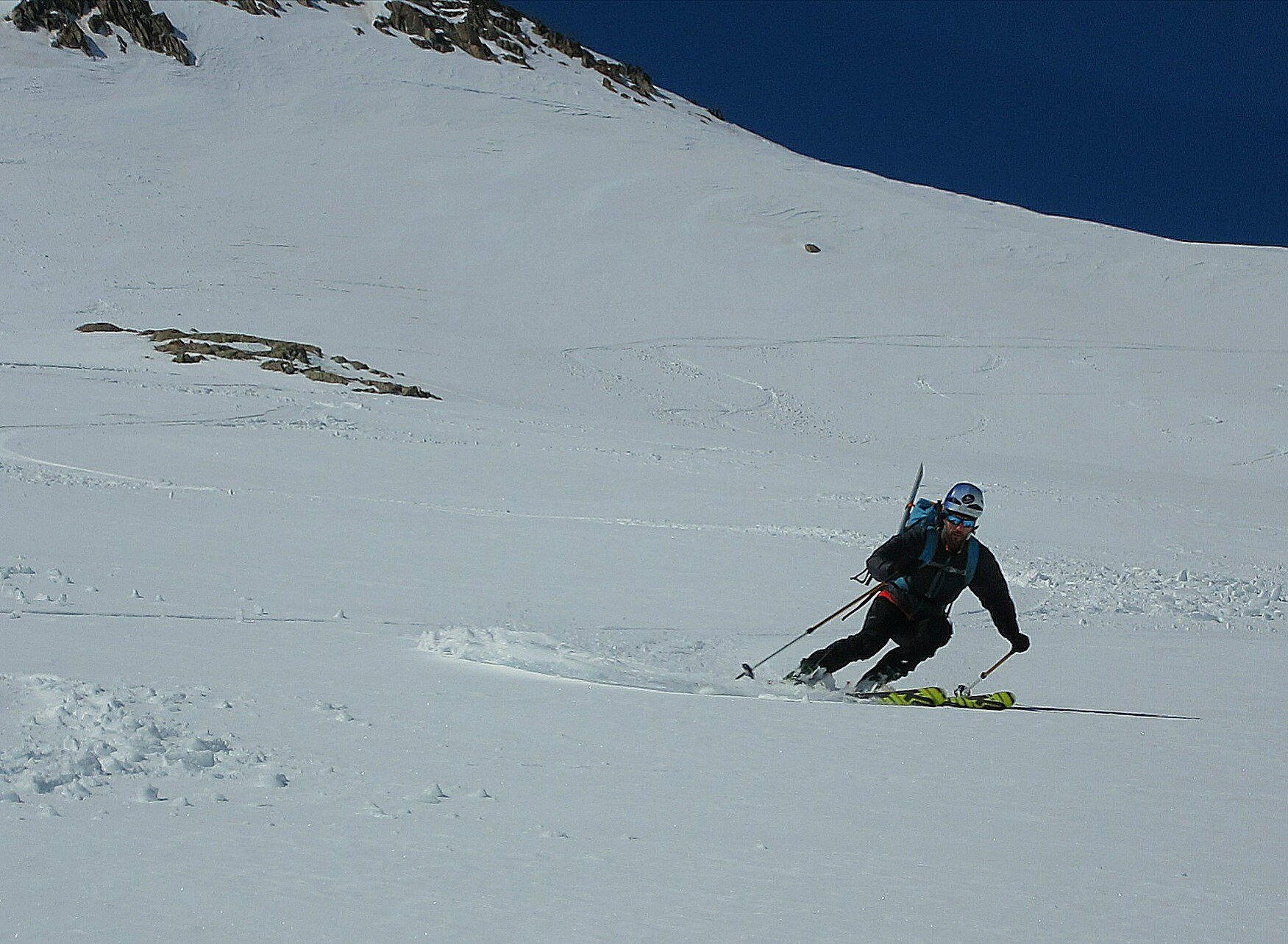 Finally we ski down the last break, surprisingly enjoyable as well and reach our cars after almost 10h of activity and 1600m uphill. 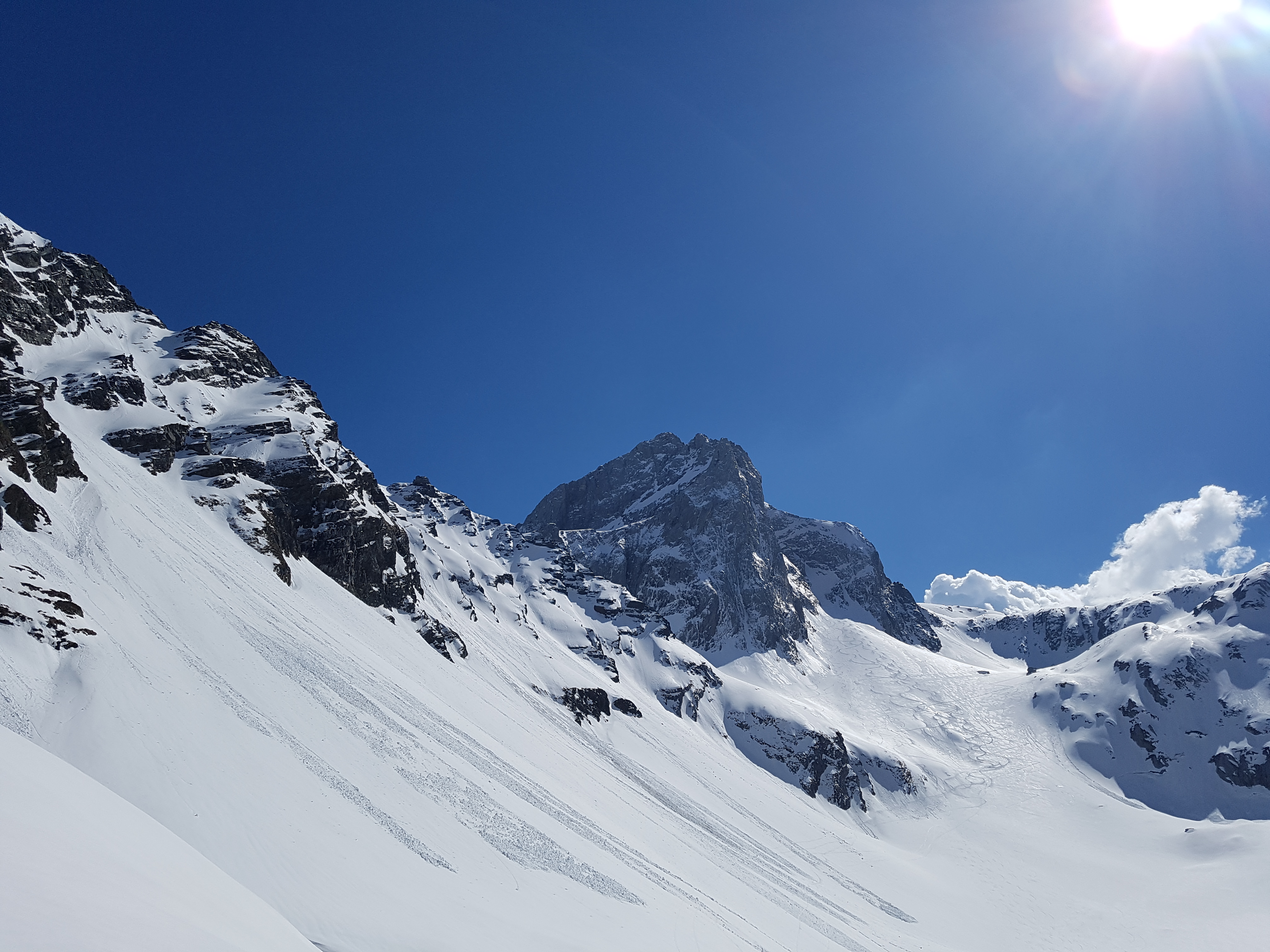