Last week I visited my friends of Plein Nord. They represent Scarpa in France and they took their time to show me the new products for W2017-2018. We discussed the innovations and I got to get the on my feet. 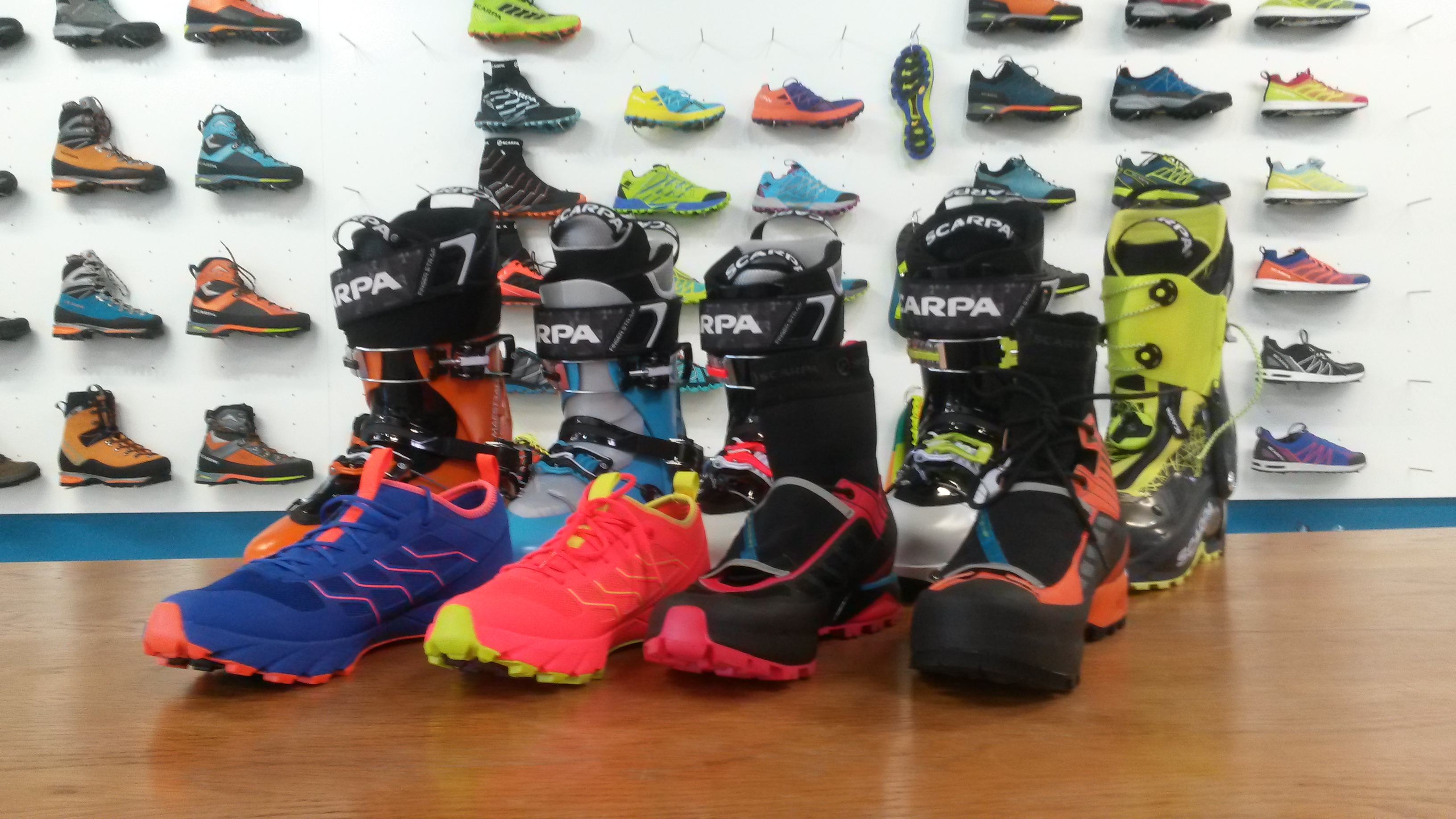 Over the next weeks I’ll be writing my first impressions about their main achievements and hopefully soon I’ll be testing them on the field to confirm their functionality. 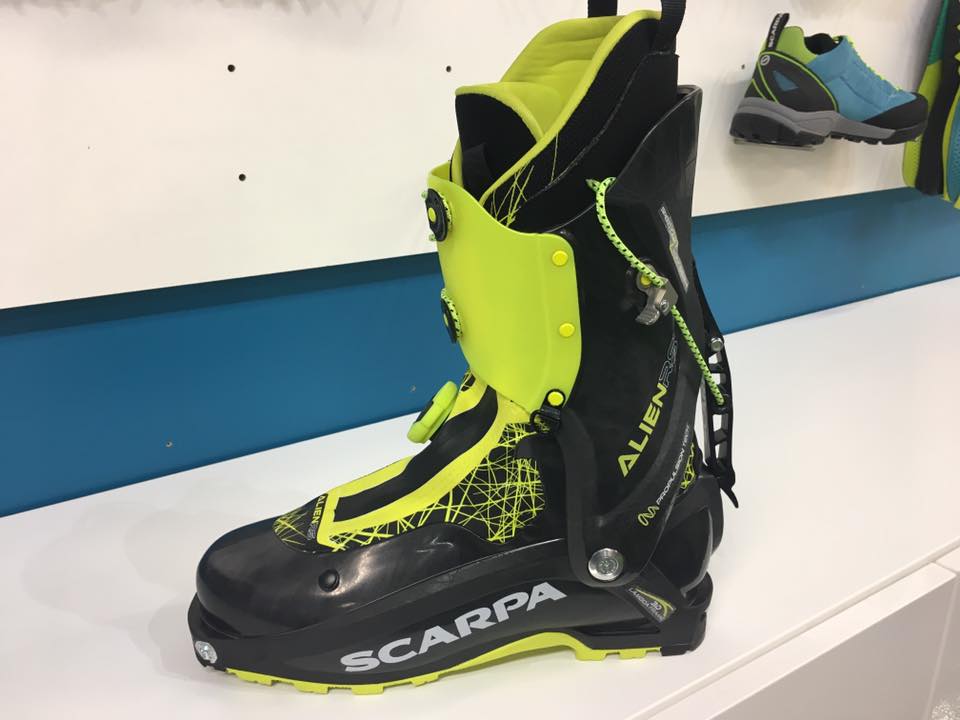 Now we are talking!

From the point of view of a backcountry ski mountaineer enthusiast with a strong taste for freeride; the old Alien model used to feel like a freak boot reserved for those amateur racers going in flashy suits, colourful soft backpacks, speed looking glasses and chopstick size skis. I respect the concept of the boot and to be fair it is among the sturdiest you can get at that weight. Besides of racing, It is a clever solution for long traverses and days with over 1500m uphill, however I just could not really embrace it in my skiing. It would take you down the mountain but it would not make any sense in a setup for someone that wants to charge downhill.

As soon as you get the new Alien RS in your feet, you will quickly understand that the new model goes far beyond racing. It now has clever features for technical mountaineering terrain and surprisingly feels like a proper ski boot. With a flex close to 110 it feels on your feet close to the Scarpa F1, but with half a kilo less per pair: your canvas can now turn BIG!

I got impressed to a point that I got quite irritated that they kept the Alien branding name; I would have gone definitely for another name because this is definitely another game.

First of all; weight. Scarpa has achieved to make the Alien RS at only 890g per boot for the size 27, cutting 20g from the old version. This may not sound very impressive, but it actually is, especially considering that they have added instead of cutting and that the whole structure is significantly sturdier.

Such improvement has been mainly possible due to the use of a new material for the shell and cuff: Carbon Grilamid LFT. It is basically a polyamide that offers greater stiffness and tensile strength but at lower volume and weight. Double shot.

Let’s compare the weight of the Alien RS -890g- with the top boots of the category:

If figures does not say much to you, 890g is actually less than half of the weight of a standard freeride boot such as the SCARPA Freedom RS and it’s 1985g. The truth is that, considering it’s new features and support, I still would have been impressed if the Alien RS would be weighting 1090g, but with 890g it definitely has the potential to be a game changer.

For some reason, integrated gaiters have taken too long to become part of ski mountaineering, however, it seems we are getting there. You will appreciate the sealed zipped gaiter for keeping dry on deep snow and boot packing. The cables of the boa go inside the gaiter so nothing sticks out making it safer on mountaineering ground and crapon maneuvers.

Actually i’m a big fan of the new boa system. On the old boa, when adding pressure, you would feel most of the strength against your talus leaving not so tight your midfoot and metatarsals. The new boa, on the other hand, sits on a bed that covers the whole forefeet area. When adding pressure, your whole feet gets blocked uniformly instead of been pressed mostly in one spot. This improvement does not only gives you comfort but as well a feeling of solidness for transferring the strenght and drive to your planks.

The gaiter is obviously a weak point for the boot. When the closing system goes under the gaiter friction is reduced, so probably it adds durability however only an intensive field test can really show how solid the zip and the friction against the cuff are.

The new lever, now made out of aluminium, is smartly integrated with the cam lock system, improving significantly its functionality. 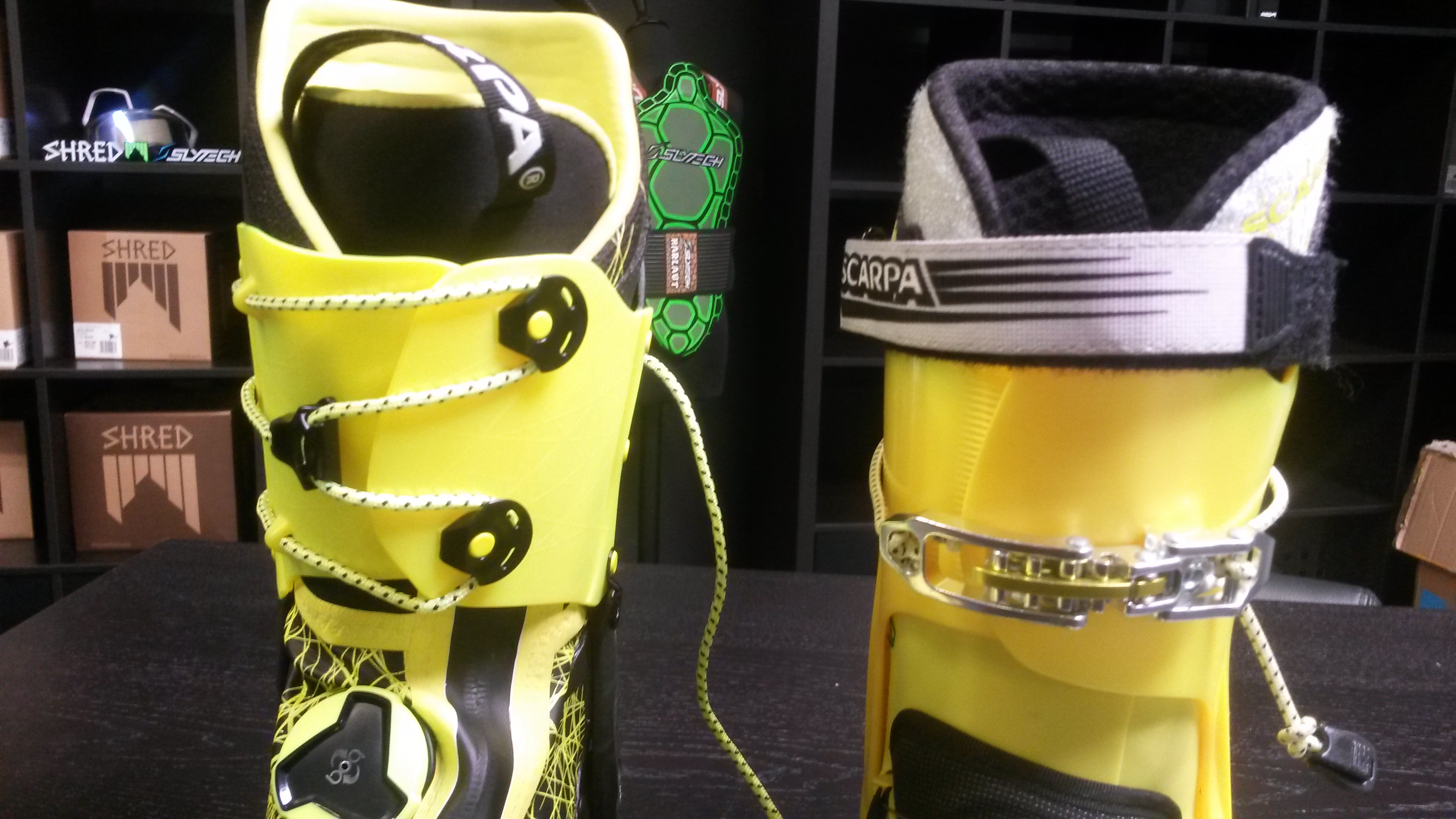 First of all, the upper axell of the lever sits on a railing platform that allow us to adjust the forward lean of the boot at 7º, 9º, 11º and 13º. We are not able to adjust it during the activity, but we can fix it home achieving a more aggressive or more comfortable ski angle.

When the lever is on walk mode, the locking system opens automatically, so we just need one move to be on walk or ski mode. The locking mechanism of the new model does a double turn around the cuff instead of a single turn, reinforcing significantly the blocking strength. There is a cam lock adjuster that allow us to tighten the rope. It is easy to adjust, but it seems that if we touch there too often we may weaken the dyneema string; on the other hand, it is easy to replace when damaged. Again, this is something that need to be tested under abuse.

I like as well that the piece on the heel where the lever locks has been reinforced. Before, the lever used to lock against a slim bar within a short distance from the boot creating a weak spot that could be affected by icing. Now the platform is easier, stronger and does not pop-out as much making it more friendly for semi-automatic and automatic crampons. I would actually like to test the boot to see how well it behaves on semi and automatic crampons from different manufacturers.

Another important aspect of the new lever, is that when open on walk mode, it sits very close against the cuff and remains there. The old one use to float a bit on the air creating an angle that was potentially destructive on pants. 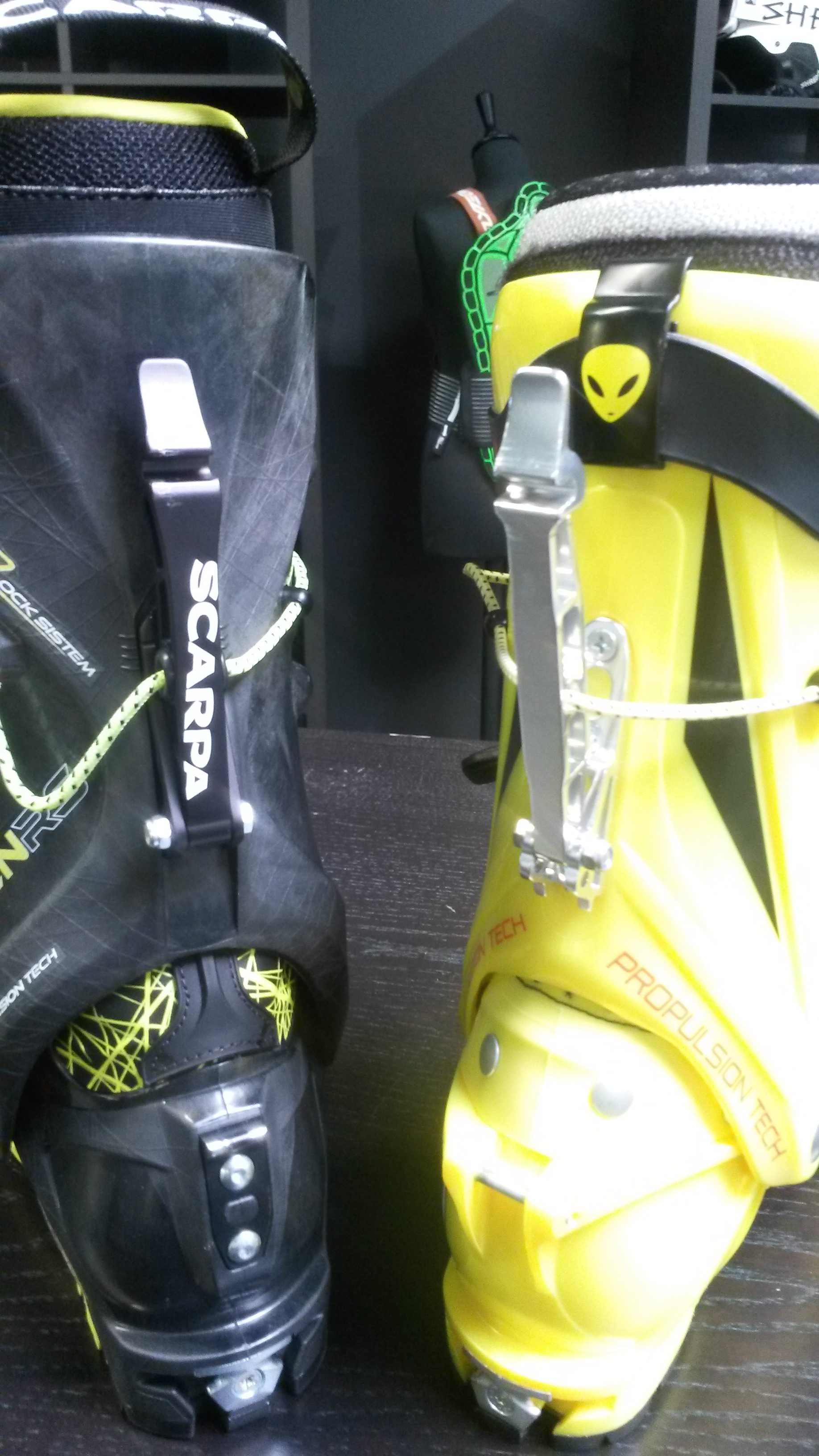 Something that I really appreciate is that the new cuff is significantly higher that the old one. The back of the cuff is shaped on an X structure that prevents lateral torsion and adds stiffness.

Adding this features to the Carbon Grilamid LFT material and the double boucle cam lock, you really get a solid feeling for charging downhill.

The stiffness of the Alien RS is interesting because it goes radically against what we thought last year was going to be the future, when Arcteryx presented their Procline boot that did shake the ski mountaineering world. One of its most claimed features is that it actually has 360º rotation of the cuff. On walk mode the cuff offers a certain degree of side torsion. I have tested that boot quite a few times and I’ve found that feature game changer in specific situations. On steep sketchy skinning it allows you to do your edging game better and stick to the slab. As well, side flexibility increases significantly your crampon game. You can actually ice climbing easy terrain  in that boot and you feel solid on north faces.

The Alien RS does not pivot sideways. Not even a bit. As we have just reviewed it is meticulously designed to not do so. However its stiffness comes in an easy way. There are no weird layers, nothing sticks out and it is incredibly light. I believe the crampon game would not be as sensitive as on the Procline but with 890g you should be able to smash uphill any ski line that you have in mind. Scarpa has tried to increase sensibility by making a very thin layer of rubber under the toes.

Another important factor to consider is that after several of activity, a lighter boot with stiffer structure will make you progress easier on straightforward mountaineering ground such as couloirs, however if things get serious in a specific section that requires a very technical sequence, then side rotation can set the difference.

Again, I will be more confident judging the technical mountaineering performance of the Alien RS after having tested it on couloirs, ridges and mix ground. 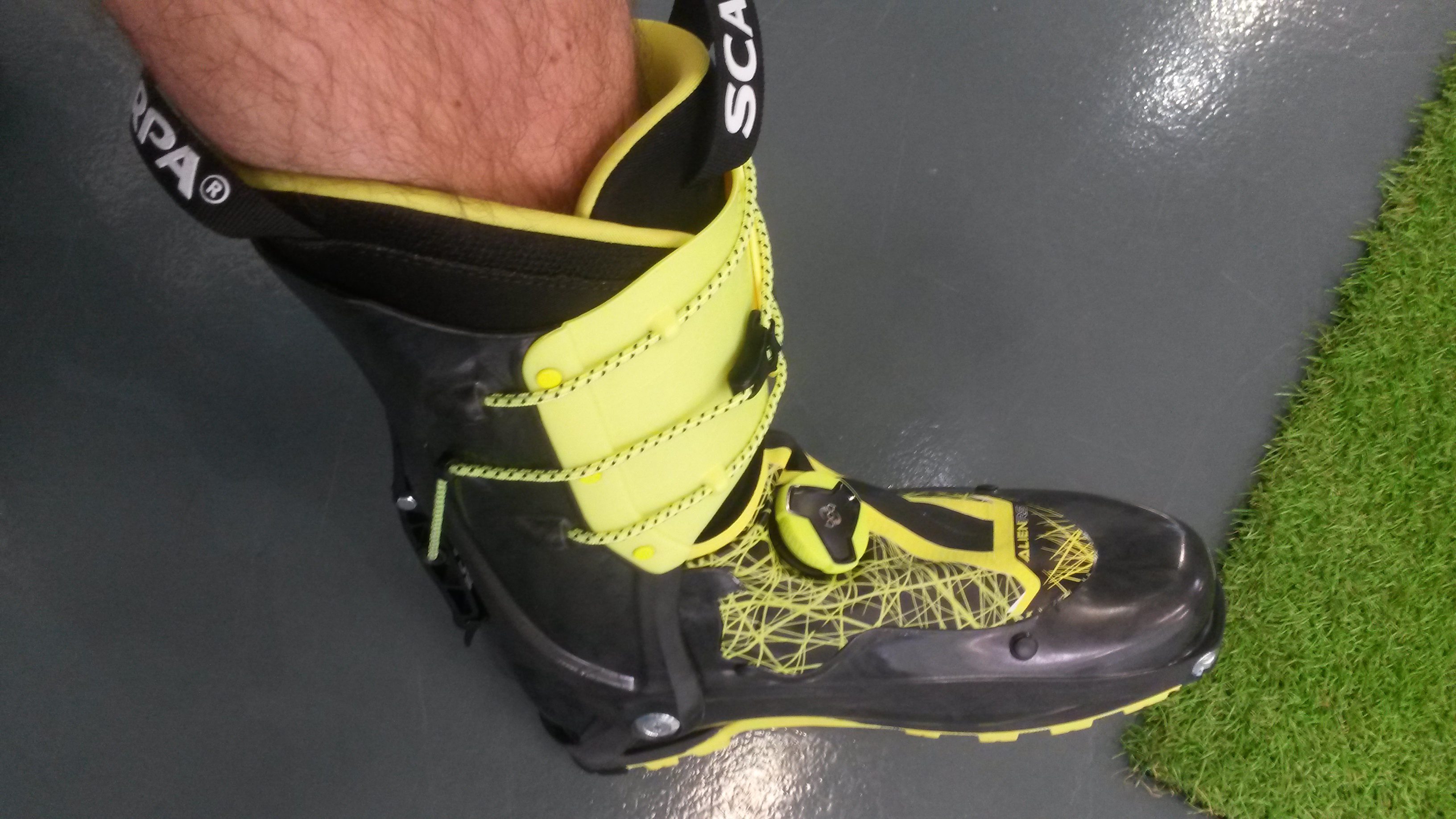 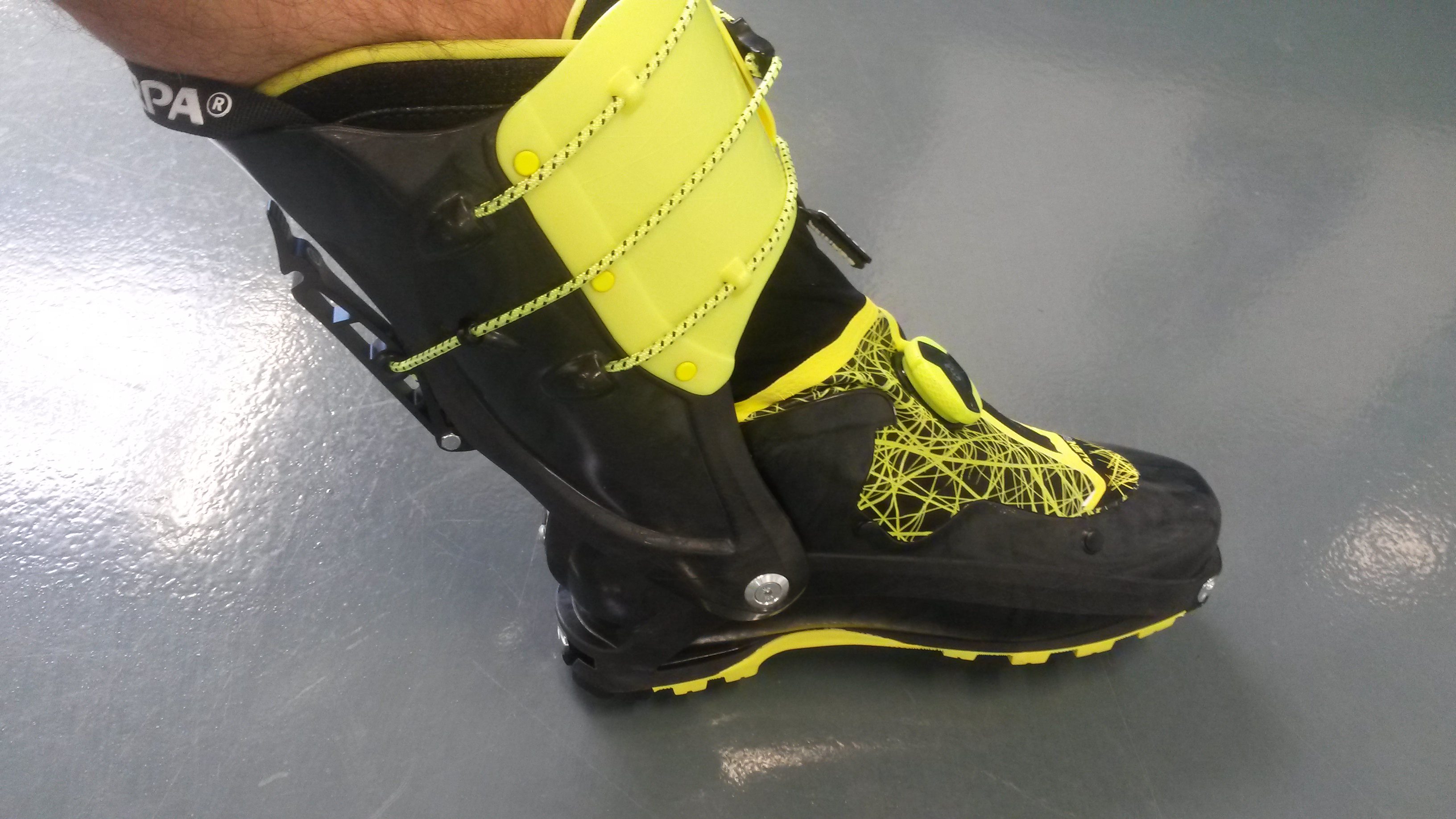 I have quite a large foot, and I felt very comfortable on the boot. I did not have a pressure spot, and I found that the adjusting system compressed the boot uniformly making it user friendly and reliable. It is true that the inner boot is extremely thin, so you don’t really have room for cushion in case you have a part of your feet that sticks out. I appreciated that it does not press on the arch. Sometimes ski mountaineering boots try to be more neat by been narrow, and in my case, this translates in horrible pain, swollen feet and cold feeling on my toes.

We have a racing weight ski boot, with clever mountaineering features under a neat design that actually feels solid enough for charging downhill. Under my eyes it feels like a solid candidate to consider for late winter/early spring activities that involve long distances, alpine ground, high summits and still good snow. The first thing I thought when I realized it’s weight and that I actually felt locked on the boot, was that I would no doubt invest those 200g saved per boot on getting proper wood core skis and leave carbon behind.

Hopefully that way you can get proper ski mountaineering weight without compromising charging performance. Now we just have to put all those ingredients to test and check the Alien RS on it’s natural environment!