Friday sixth of April, ten o’clock in the night, we finally land in Tromsø. It’s my third trip to the region and I’ve already spent around six weeks up here; however, it has always been in summer or the fall. This time we brought the skis, the alpinism gear, ice climbing gear, and all the rock stuff. We’ve rented a van for two weeks and we feel ready.

The plan was to come at the end of the winter so the snow will go all the way down the ocean, would be stable and hopefully we will find powder or spring pow. Moreover, we will have plenty of daylight, stable temperatures around zero degrees and If we were a bit lucky we could even see some of the last northern lights of the season before the midnight sun would settle in. In case weather decided to go full spring and we didn’t felt like doing long approaches on the muddy tundra with the skis on the back, we had all our rock gear to tackle those oceans of granite that pops all over the landscape.

We left the airport and found the whole city sinked in snow. Literally. Over a meter on the sides of the road and the houses were just buried. It was completely dark and snowing like there sky wanted to fell down. We start to think that perhaps we came a bit too much in the winter. The first thing I do is call my friend Jan and joke about how he always moans about how mild and rainy winters in Tromsø are. We schedule to meet at eleven the following day to ski tour and catch up. He also wants to play it safe and introduce us to the conditions of this winter. Even though the snow bulletins of http://www.varsom.no/ are very detailed, in Norway there is a strong effect of micro terrains with specific microclimates. Conditions can change a lot in mountains or valley that can be very close, especially with a level three of risk. 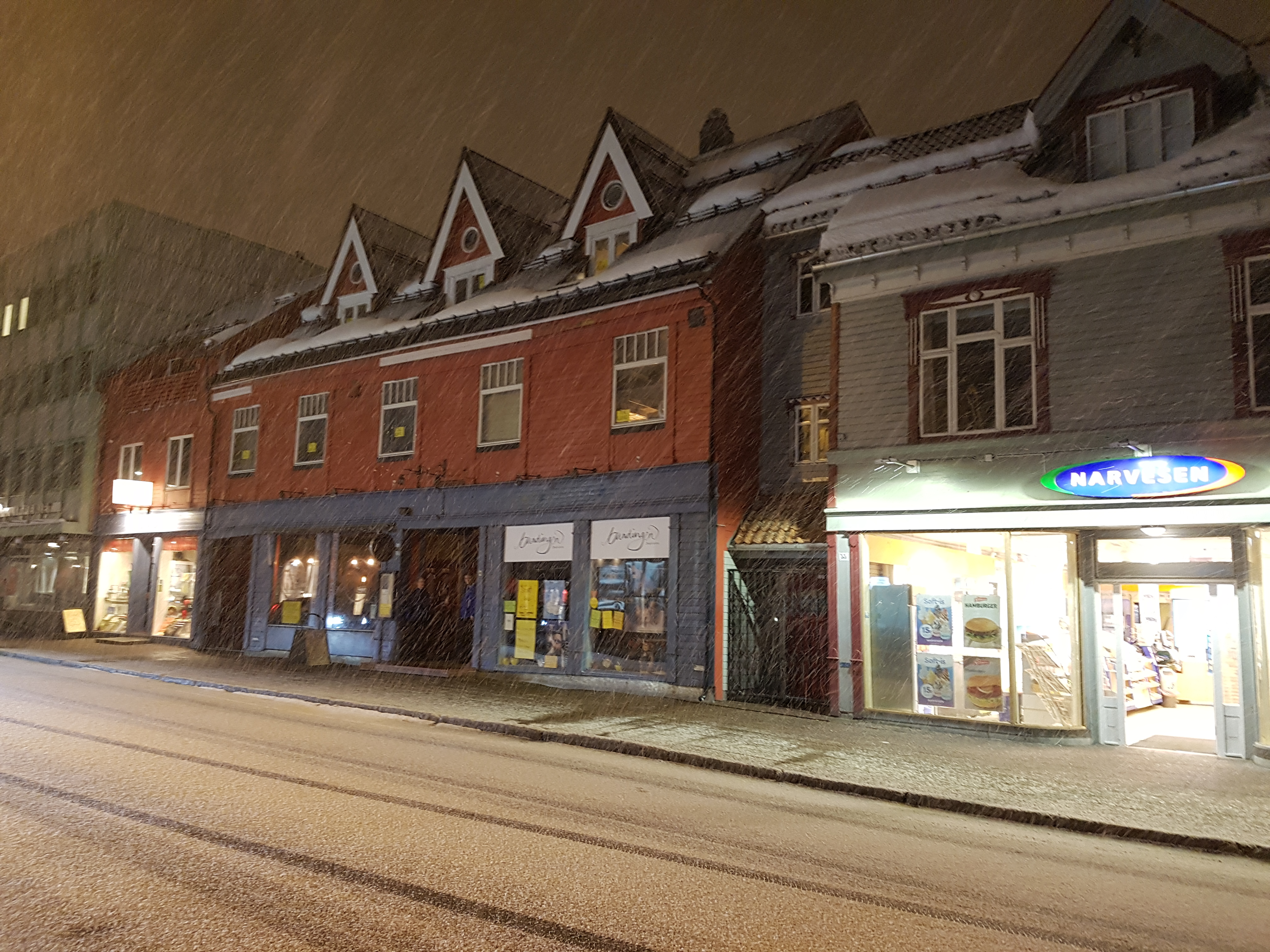 When we made it to the guesthouse and they saw us appearing with the skis, the elderly couple, veterans from Tromsø, were a bit in shock and warned us that conditions are complicated for been in the mountains this season.:

“It’s been snowing a lot on the last two weeks and there has been a rampage of avalanche incidents, especially involving tourist groups with foreign guides, mostly in the Lyngen alps. They even told us about that group of twelve that got all trapped in the same avalanche a few days ago.”

Well, we decided to go visit my favorite falafel place in Tromsø, have a little walk enjoying this crazy snowfall and go to bed. The following morning we picked the van and then went to the sports shop to buy the gas, map and ski book guide. Again, we heard the same stories, including the one of the twelve people caught. Moreover It still snows strong, it’s overcasted, there’s quite a fog around and the air is moist. Not best case scenario…

I call Jan, he is quite a badass outdoor man with a solid criteria on how to do things right and staying safe. He suggested to go for a few runs on a forest area with mellow slopes around the 30º. Probably it would be happy riding, risk free terrain and we could check how the snow was behaving. His girlfriend Oda decided to join us on the last minute. For someone that self defines herself as “someone that does not ski that much”, she was almost the fastest during all the uphill. After two very fun runs, we felt confident on how the snow was consolidating, so we decided to fix a bigger day for the following day.

First night in the van: it seems we can arrange the cooking and even though the night was kind of fresh, I guess we passed the exam, as we slept around nine hours in a raw. 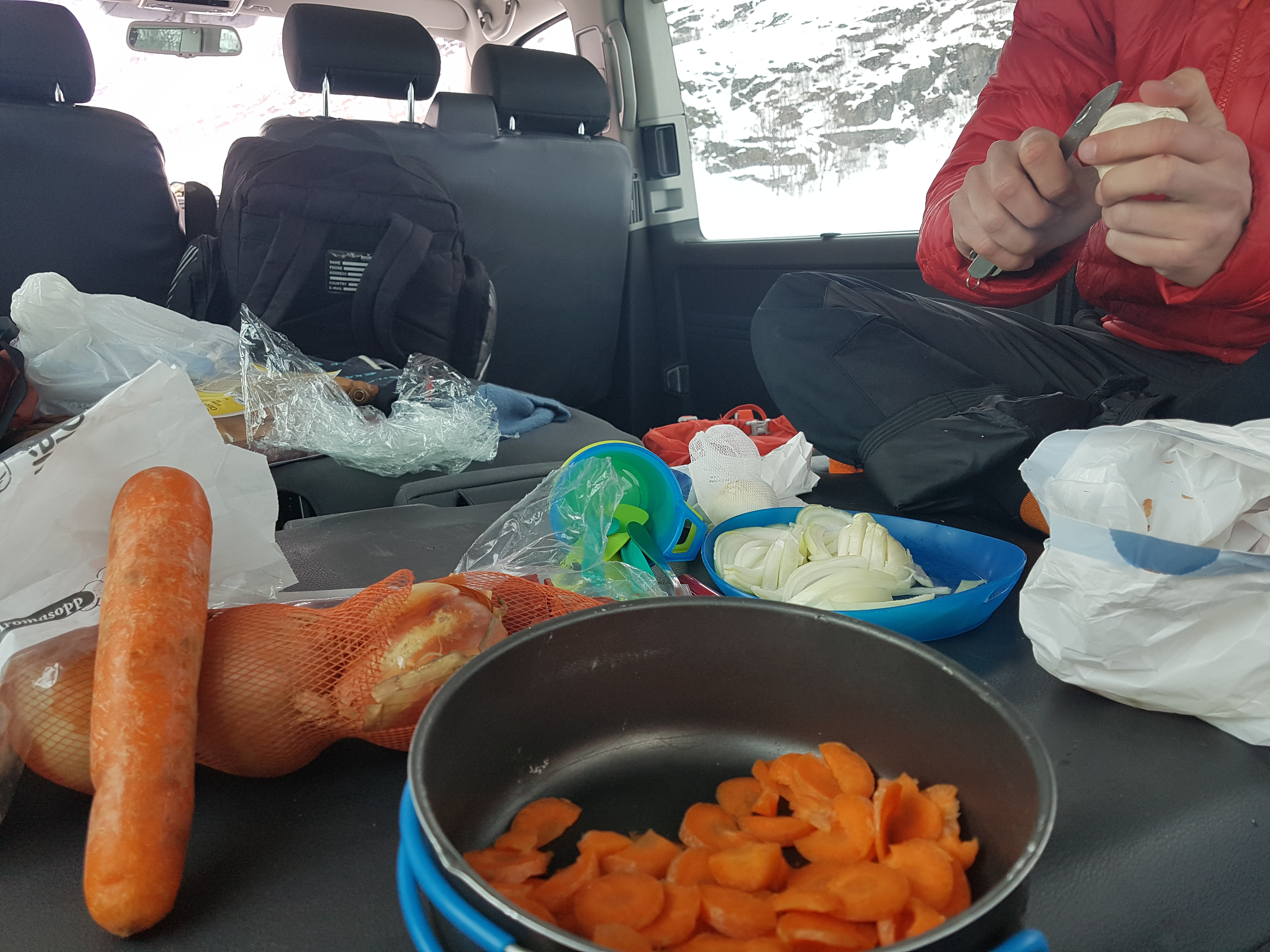 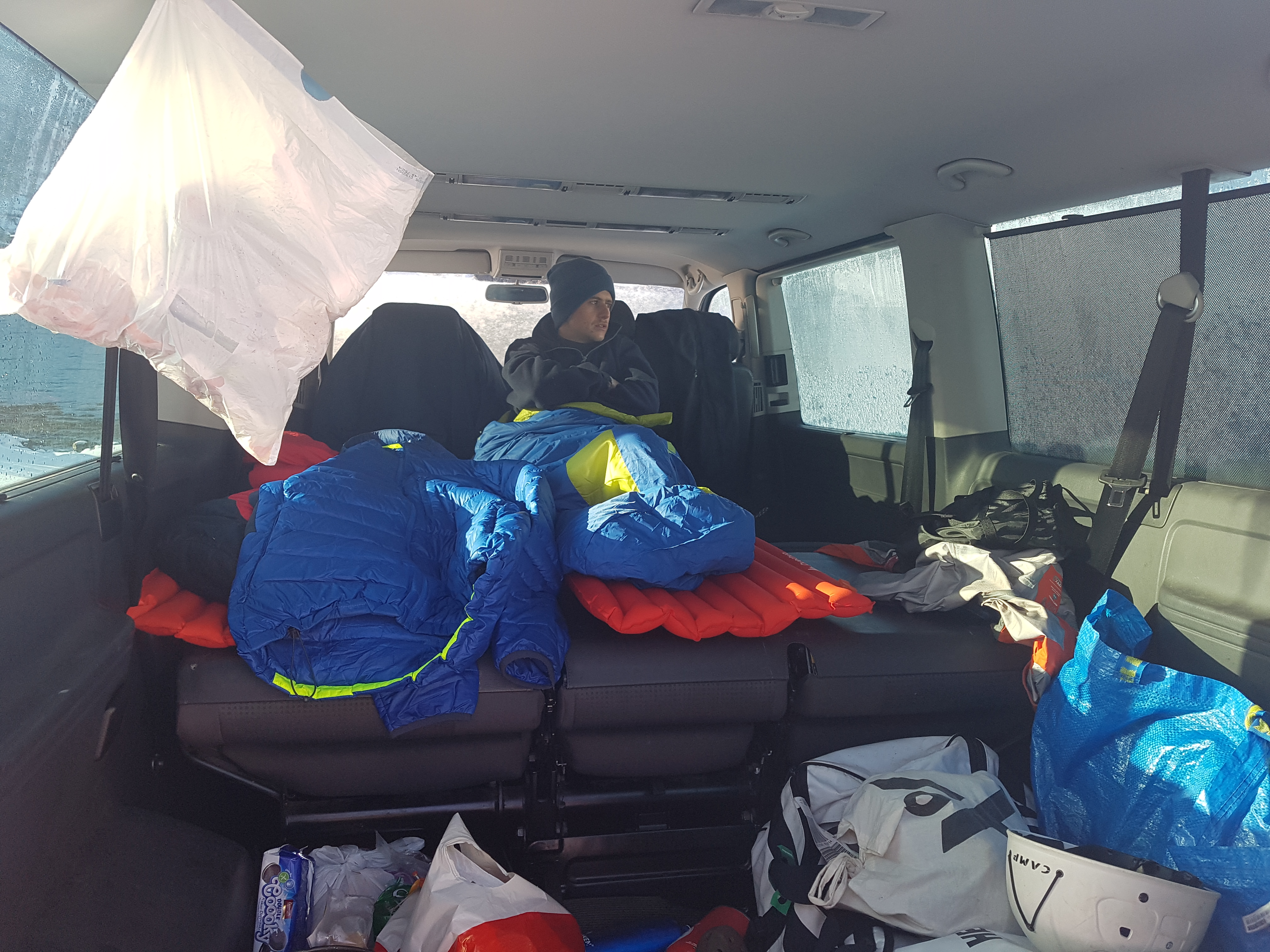 When we wanted to make breakfast, the olive oil was completely frozen, then we understood why it felt kind of fresh towards seven… By eight we were all stressed. The sky was all blue and the sun was already so high up that it seemed we had already wasted half of the day. Well, it wasn’t sunny all the way, it was more of those atlantic days with heavy clouds but some big stripes of sun in between. That’s pretty much the best you can get on the west coast, so time to move! 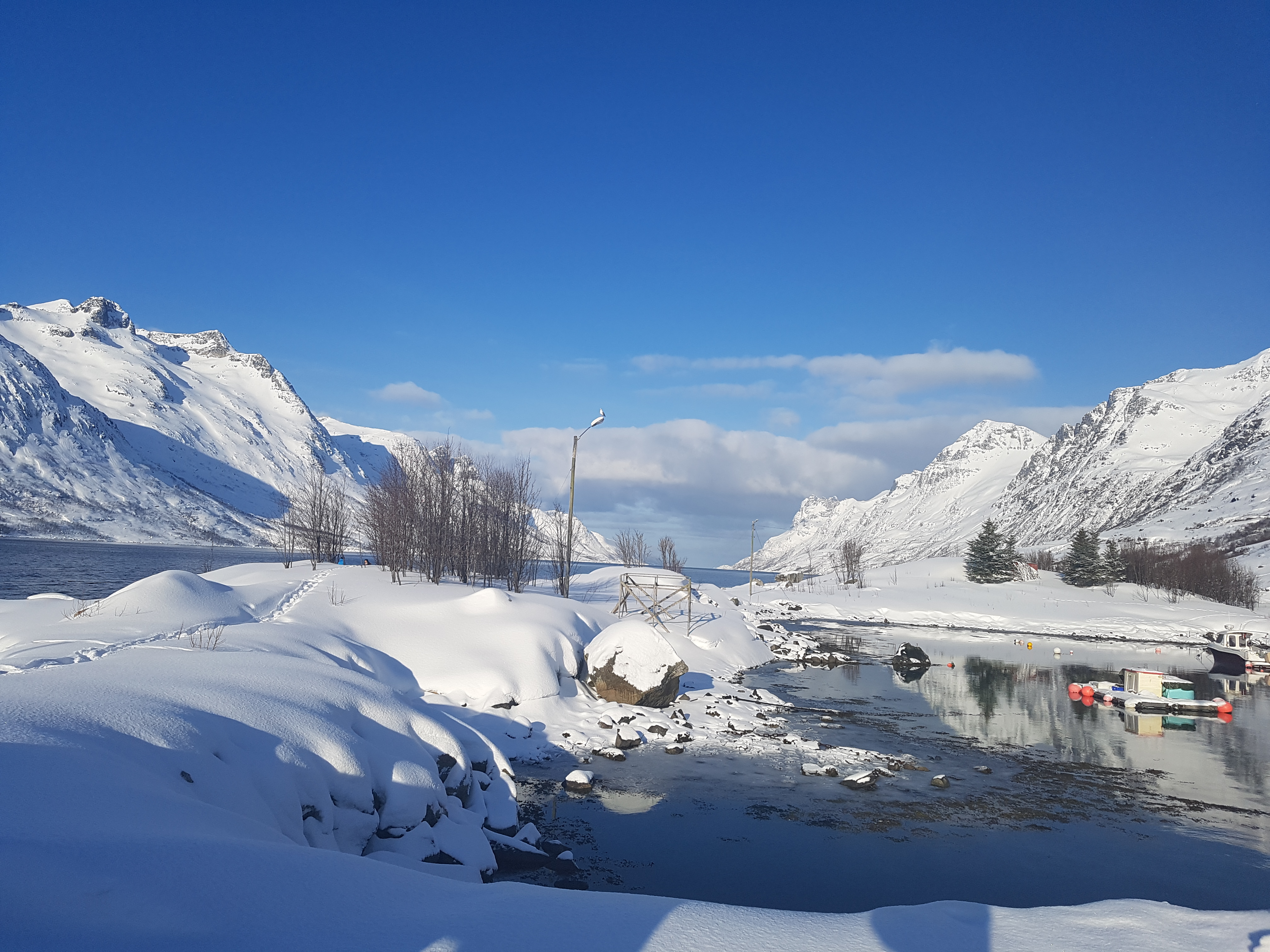 We went for Lille Blåman even though Jan pointed that it was the most sunday driver mountain in Tromsø. On the other hand it’s extremely panoramic with clear skyes and for been a 900m high mountain starting at sea level, you can manage it all the way without taking steeper slopes than 30º making it quite a big mountain safe to navigate. 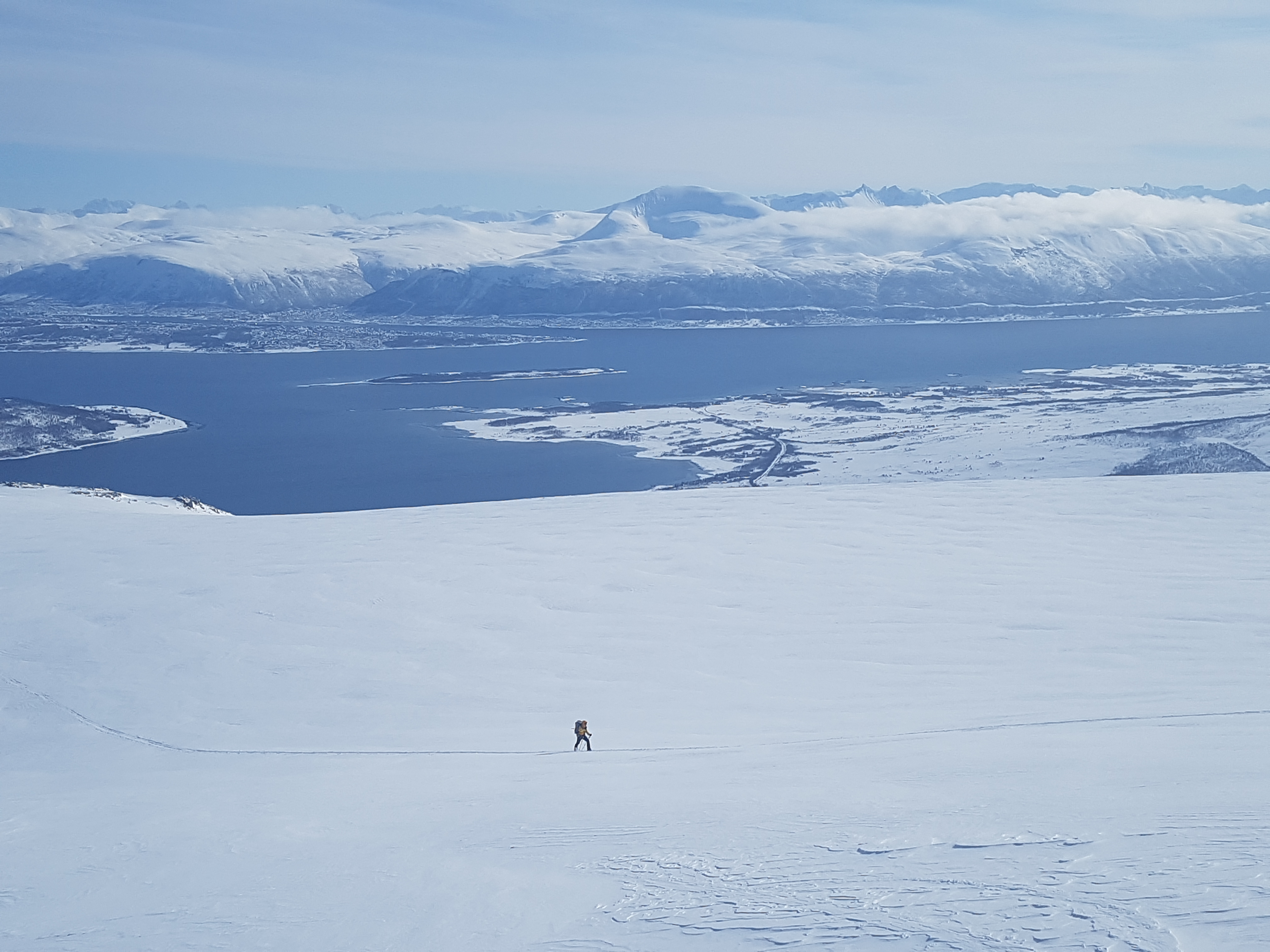 As we go uphill, we soon saw some surprisingly big groups. We get the turbo mode on, and achieve to make it pretty much the firsts to the summit. Then we realised we didn’t really needed to rush as the mountain is so wide, that there are fresh tracks for everyone. We got extremely surprised by the quality of the snow, how can it be suddenly so cold and fresh powder when yesterday was kind of moist and been so close to the ocean? 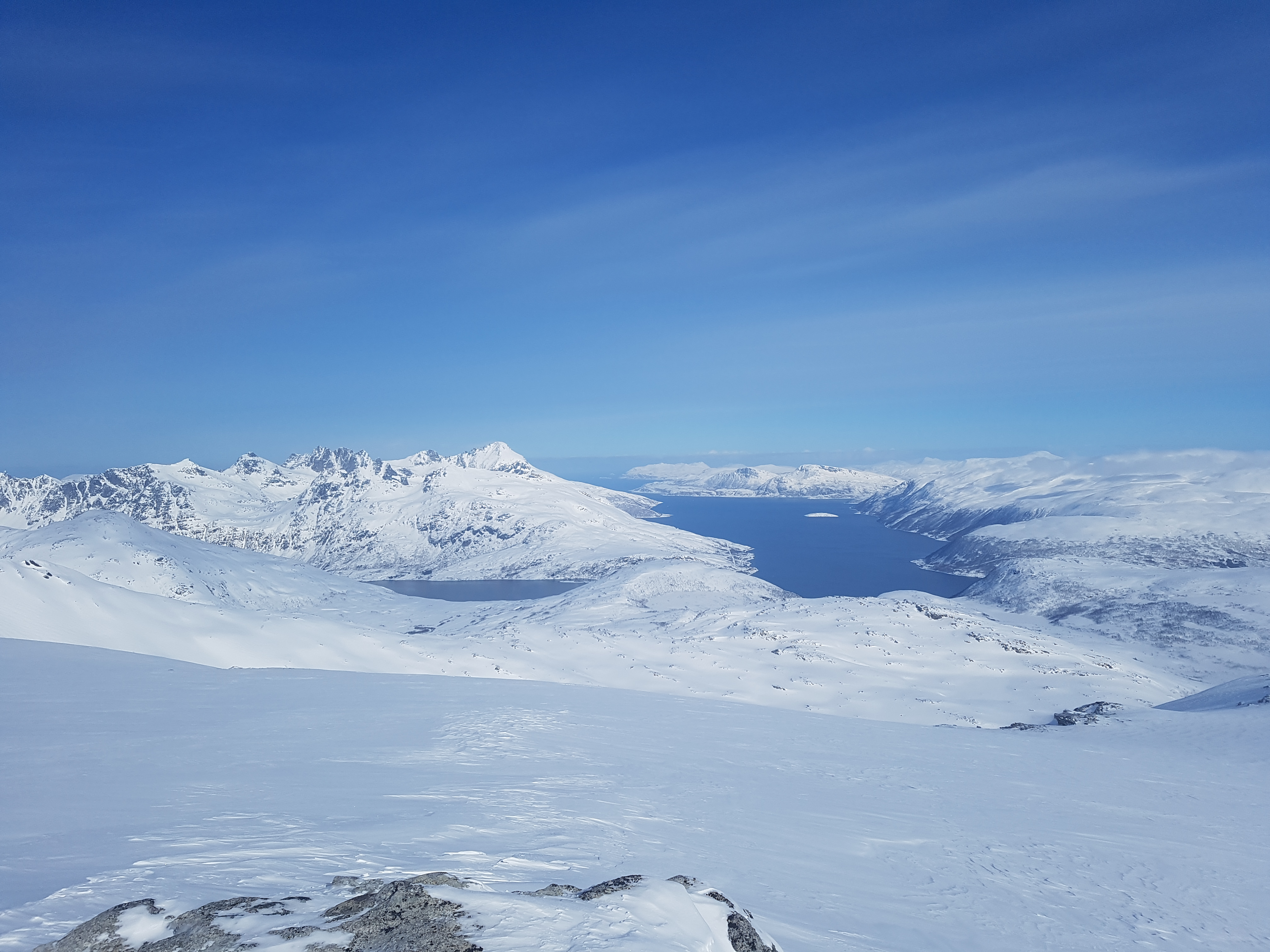 Snow did not only felt good, but stable and compact as well. By 12.20 we were back in the car. Snacking party starts, but I soon warned Pere that we must go for the real first mountain of the trip: Buren. 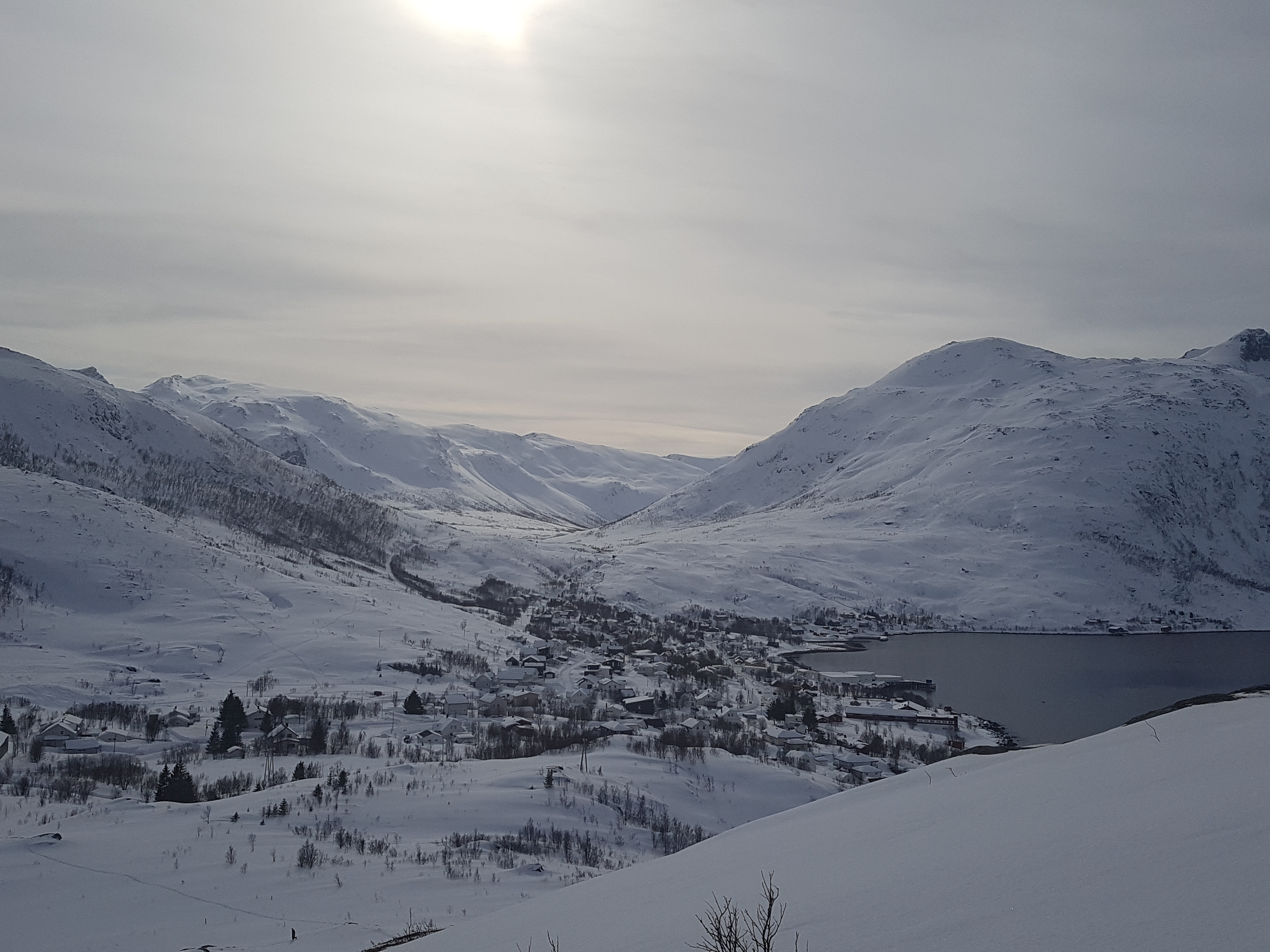 Jan and Oda recomended it, but could not join for this second one. It is more punchy, and on a day like today you needed some navigation and risk mitigation skills, but they were confident with us and insisted that it is their favorite view from Tromsø. Moreover they said that we would most likely be surprised about how tracked we were most likely going to find it. They called it the “ski resort”. We thought they were joking, or that those spoiled arctic folks did not knew what tracked really can be. 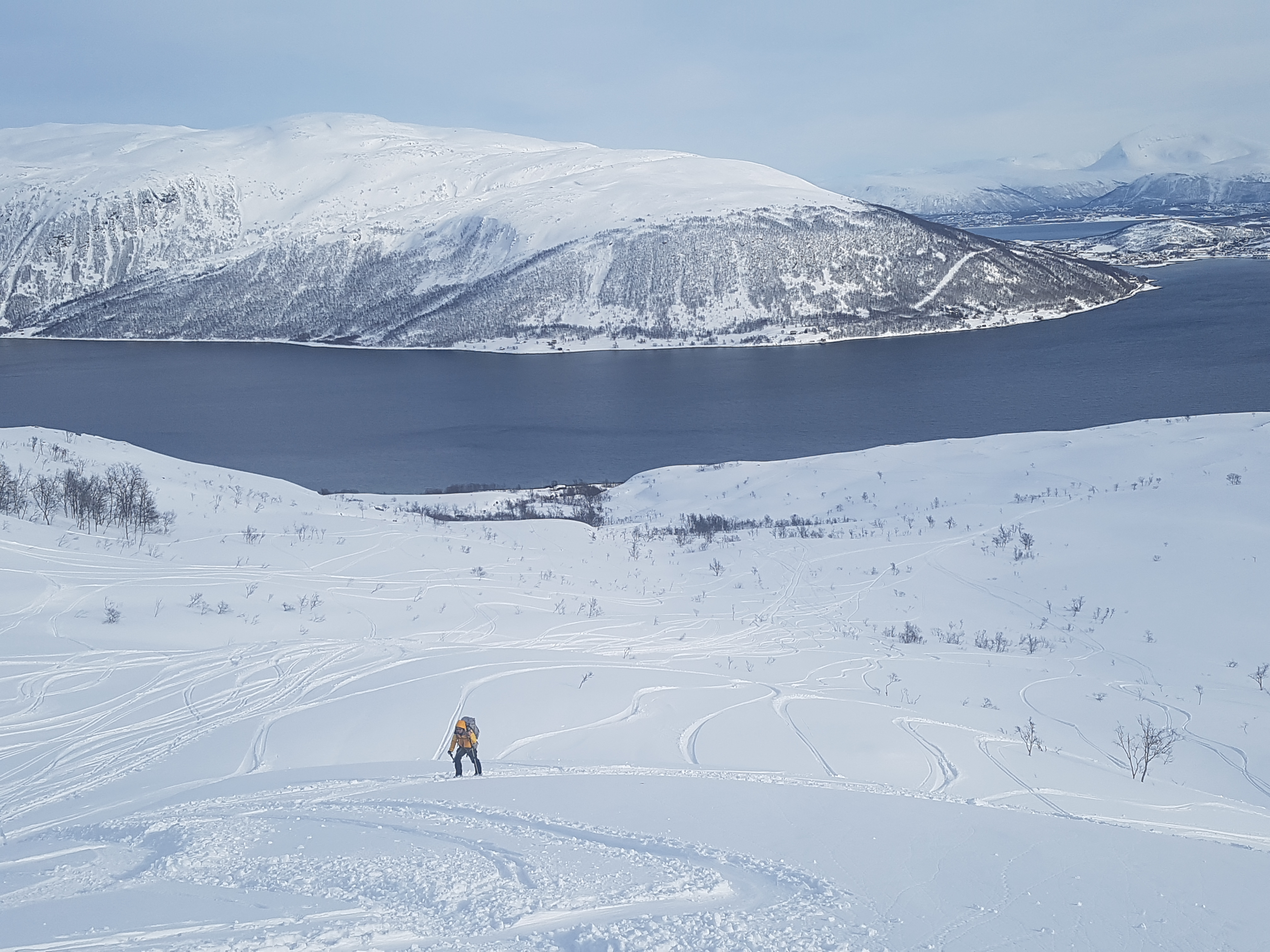 Well, it was really tracked, however on the way up we spotted a playful riding terrain that hadn’t been skied yet. 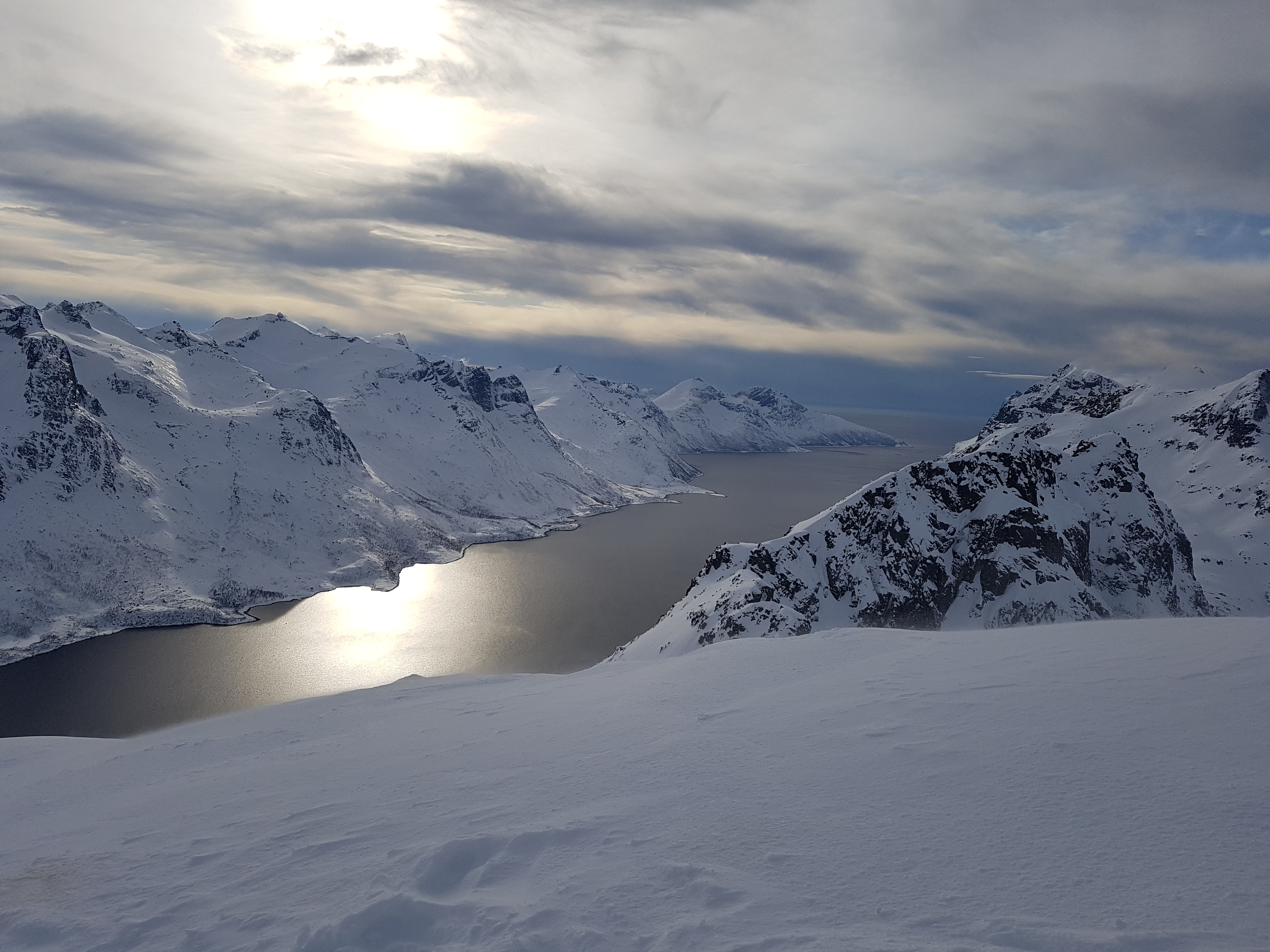 Anyway, for a “ski resort”, the view is not bad at all. We even saw a herd of reindeers on the way up, and we got so close to them on the way down…For sure I had my little “into the wild” moment over there, and I will remember it for a very long time. 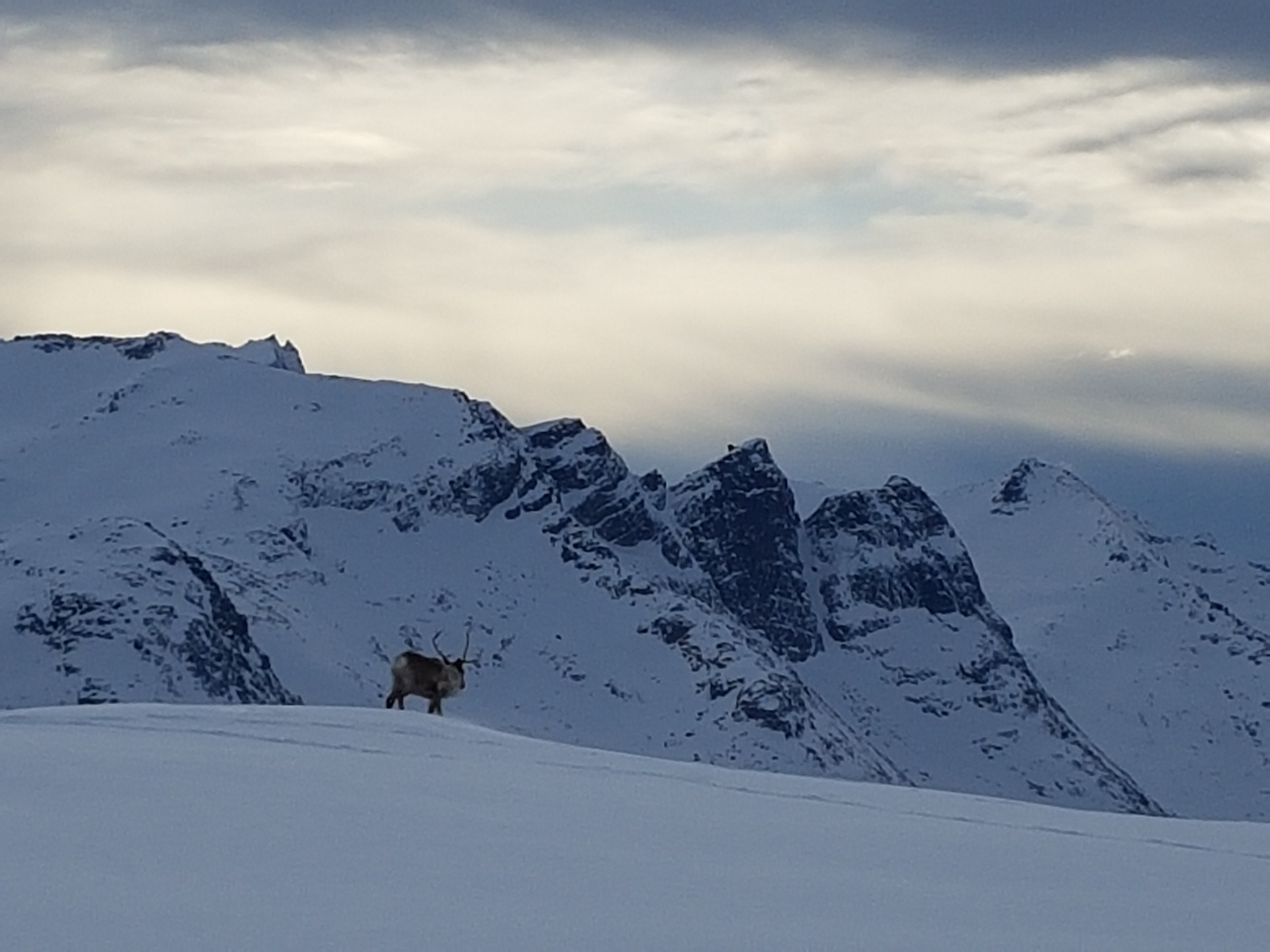 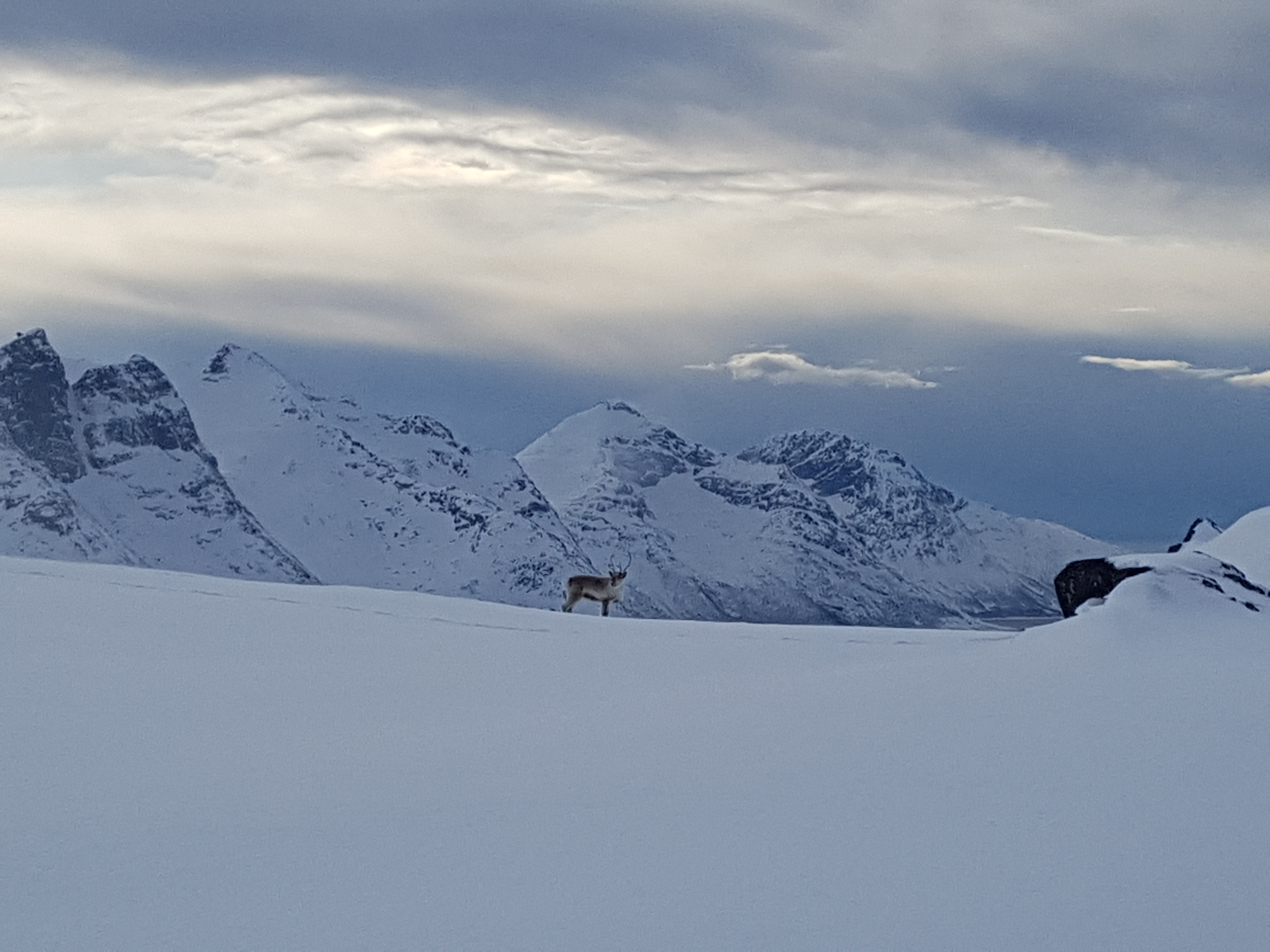 The good thing about touring in Troms at the end of the winter, is that as sun sets around ten, and temperatures doesn’t really get above zero, hence you are not stressed about been late in the mountains. Some days we came back to the van past eight. That day I think we made it by half past six. 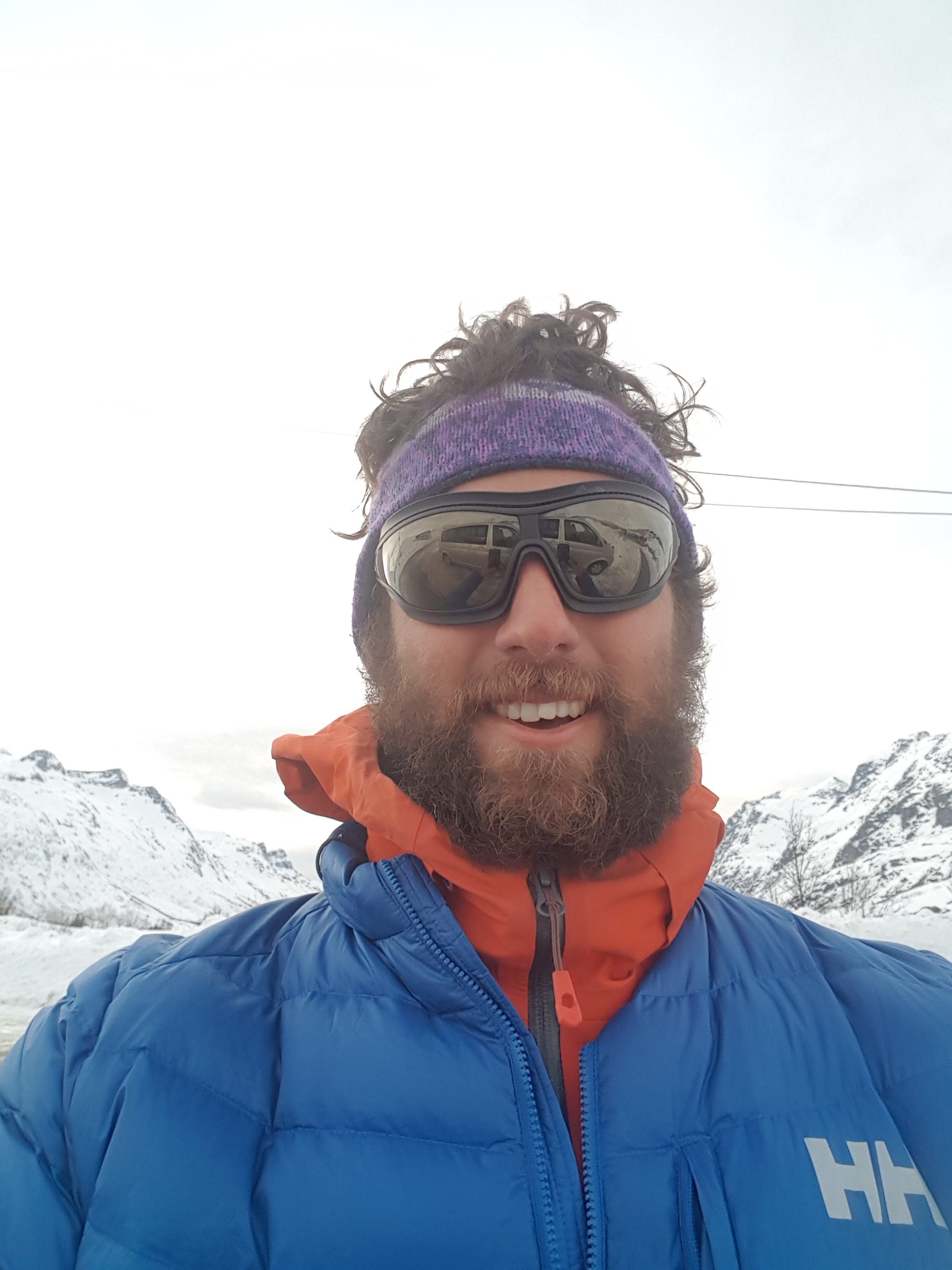 Later we met Jan at a cafeteria. He brought us a map and pointed different valley, sectors and mountains that work on different conditions. He shared with us some of his little local tricks and kind of regretted to not been able to join for the adventure, now that he was getting in the mood.

After two days on the mountains, with around 2600m in our shoulders and three summits we had a pretty solid diagnosis: Basically the problem is that for two months they had a very stable weather of sun and cold temperatures. The snow layer got icy and produced a layer of faceted snow during the nights that have taken big accumulations in some areas. Two weeks before we came, they finally received heavy storms cycles that dumped over a meter and a half of snow. All that snow settled over the layer of ice with the sugar snow in between, making it very easy to be triggered, hence all the activity of natural and human made avalanches and all the accidents reported. Over the last day,s the upper layers were finally settling in, the probabilities of fractures were getting smaller, however in case of fracture, it would go BIG.

Well, now we had everything we needed for abandoning the nest and taking our own flight. Leave the popular runs of Tromsø behind and go to cowboy ground; time to man up. 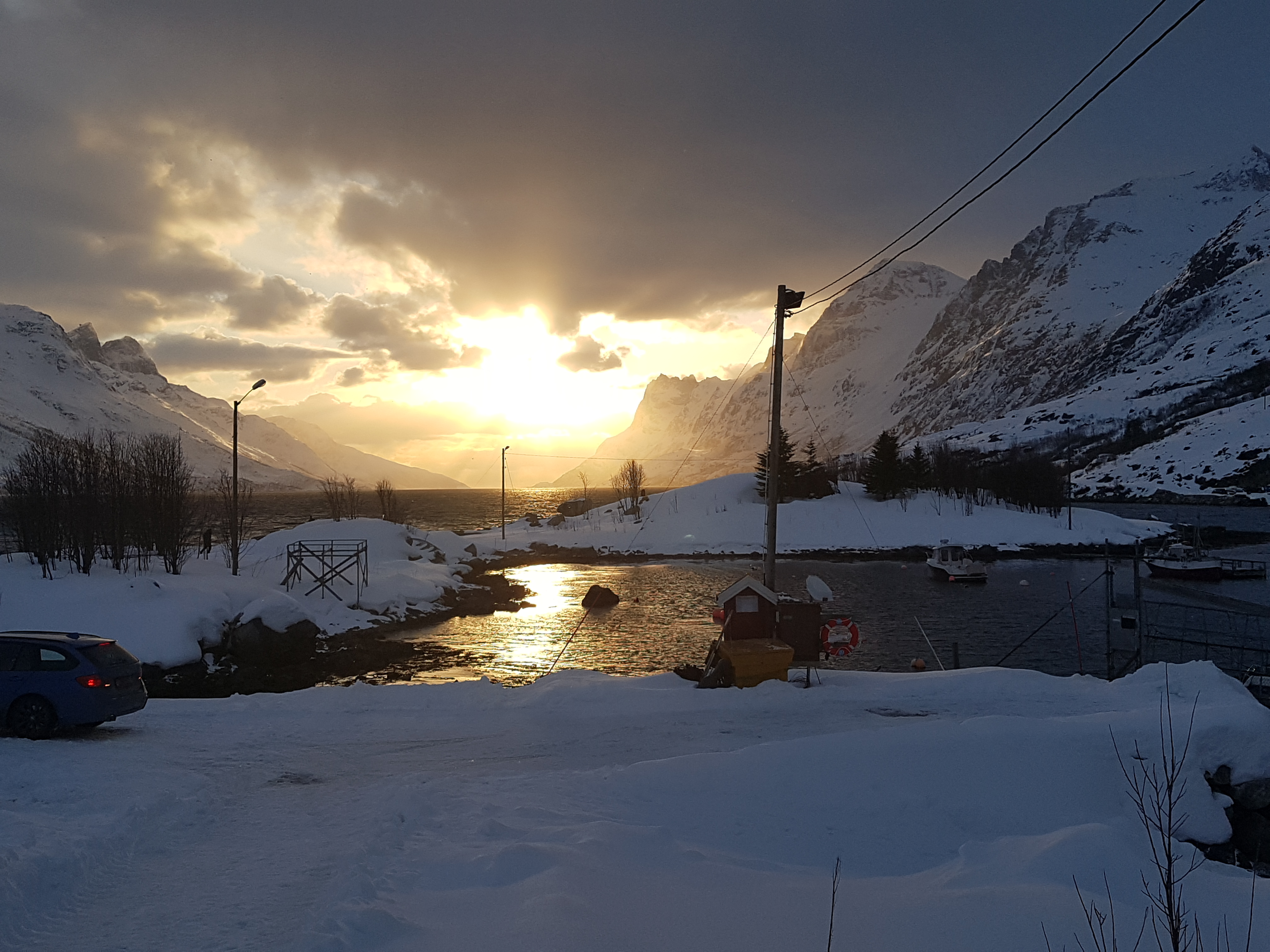