There is a big buzz around the new airbag system by ABS, the P.RIDE and I’m glad to be putting it to test over the next weeks. The most revolutionary technology of this backpack is the ability to put it in group mode, and tune the group mode according to different situations. Is this all? Well, in my opinion there is a lot more about this backpack. I’ve taken it now a few days touring and a few days freeriding from the lifts. I will keep updating the test as it will go forward.

How does it work? Well, in fact ABS have made a great video going through the modes.

For the first report I’ll be answering the three key questions:

1-THE AIRBAG SYSTEM. let’s first just take a look at the airbag system. Simple approach, just the individual mode and how it sits on the backpack and works.

2-FUNCTIONALITY.  On different activities and gear requirements such as touring the backcountry or freeriding from the lifts.

-Works with a nitrogen cartridge and has an electric system that checks the whole circuit giving you green light when everything is set right and ready to use and red light when there is an issue. Intuitive, reliable and easy to understand.

-On the control and keyboard, even if from the video you have seen that you can tune different modes, at the end while you have green light if you pull the trigger, the airbag will be activated. Simple and effective. We will go through the group modes later.

-Time to blow it up!

We have two very large airbags. In case of avalanche the largest the volume the more afloat you will keep, hopefully the more protected against contusions, and well, in case you blow one against a tree or a rock, you will always have the other.

–The airbags are well anchored and distributed all over the back, this means more effective protection and that you will move on the avalanche on an ergonomic way not having excessive pressure on your neck or your upper cervicals.

–Another positive thing is that your hands are free, so in case of avalanche you can still use your arms to “swim” afloat.

-For packing it again it’s not all that simple. Well, it’s well explained, and there is a pattern line that really helps you fold it properly. In theory it’s easy and clean, but it took me a few tries before I achieve to make it back together. The positive thing is that following the instructions lines it’s very easy to tell if you are doing it right or you have to start again.

There is a clear “mechanical room” separated from the “gear room”. Things do not get squeezed or feel unsafe due to extra packing. Some other backpacks have the airbag system on top of the same pocket where you should pack your stuff, but you know you always feel a bit unsure about shoving there your crampons, ski crampons, snow saw or even the shovel.

Moreover in the P.RIDE the mechanical room is big, as you can see we fill our cartridge, we place the other one, we close all and then we strap the real backpack.

You can tell that the backpack is not only thought as an airbag but as well as a functional backpack for the activity. It comes with the helmet strap that is of my favorite features in any backpack that i’ll choose for touring, as well as functional straps for bootpacking, both for skis and snowboard as well as for holding your ice axe without been worried of destroying the airbag.

The main pocket has a very fast and clean access to the shovel and probe and there are many cool details, like an easy access on the side to the bottle of water, little tricks for carrying specific gear and a big label with all the S.O.S numbers in Europe and abroad as well as the safety protocols for rescue.

The gear pocket is removable. On the video i’ve used the 18L, but they do as well sell a 32L or a 45+5L version. This makes it extremely easy to just take the small one for days on the resort or day activities in the backcountry, while going for the big one if we are heading to long touring excursions or spending a few days on refuges.

There are not that many days when we find the big mountains stable and with a gently layer of powder, but when this happens I go all in with my 108 skis and the airbag system for shredding. However the truth is that most of the days that happen in the big mountains are not like that. I tend to go to the big mountains only when the snow layers are getting stable and not straight after a snowstorm. I know this is never a guarantee and you can get caught in a fake security trap, but still when I go to the big mountains I try to play it conservative when it comes to choosing avalanche terrain. Moreover quite often we find technical alpine terrain on the big mountains, and in most missions speed and agility are key factors to success and safety, hence saving weight on my backpack and ski gear tends to be a successful move. Several times in that kind of terrain, more than anywhere else, you just cannot afford  mistake. In case of avalanche, even a mini one can just wipe you out of the mountains, take you over a cliff, throw you on a broken glacier or smash you against some rocky spur.

Not every long day of touring or involving overnighting on refuges ends up on technical alpine terrain. Sometimes you just seek the powder and the happy riding. For those days, counting with an airbag is a smart move, hence, been able to count with a 32L or the 45+5L can really be a big advantage. 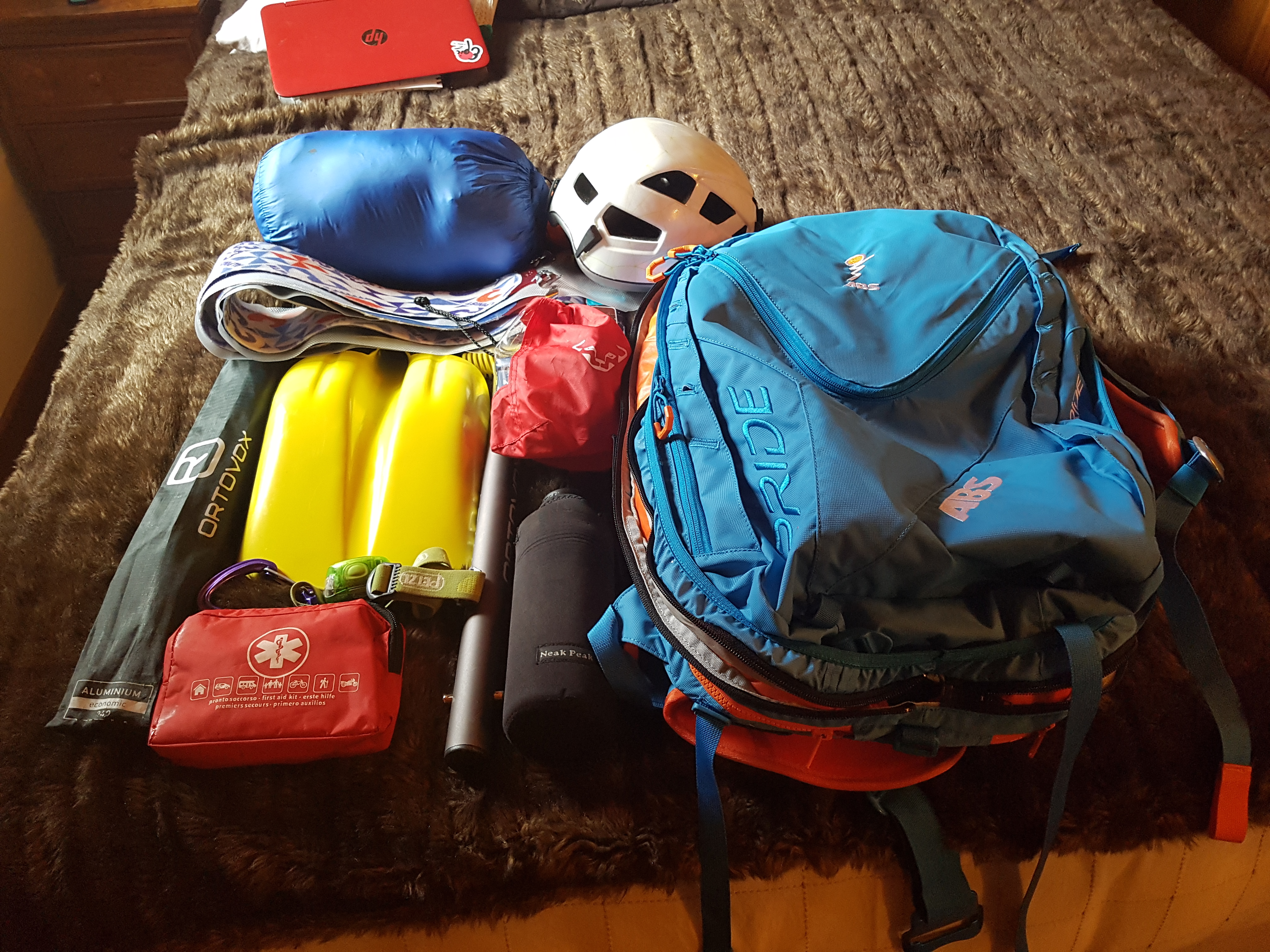 For understanding a bit better the group mode, please check again the video made by ABS, the first one that I linked on the article.

You can only set the P.RIDE in group mode amongst users that have the P.RIDE. Generally when you go out riding with your ski group, you don’t have matching backpacks. Some have older generations, some went for battery technologies and in general this is an investment that should last quite some years. It is not very realistic to think that you will use a lot the group mode amongst your buddies if you don’t head all to the shop together.

However the group mode can be extremely handy for companies offering heli skiing, mountain guiding and touring activities. On such agencies safety gear tend to be rented by the agency. If they all count with the P.RIDE the group leader can have a stronger hold on group safety in different situations. Sometimes all the group get to be in the same tricky terrain, such as climbing a slope, making a long diagonal, climbing a col….In such situations you can be in avalanche terrain. In case of triggering the slab from a direction that several members cannot see or just if it’s not good visibility, it only takes one member of the group to trigger hi/her own airbag, for having all the airbags triggered.

As well there is a group ski mode. When one member is going to ski by itself, for example, the first one going down, he can set that mode. The other members of the group will act then as spotters. In quite a lot of avalanche records involving an airbag, it’s surprising that quite often the skier pull the trigger far too late! It is definitely not easy to manage the stress and do everything as you should do it. As well sometimes we don’t see or feel at first that we have broken the slope and quite often at the beginning of the avalanche when things are still not chaotic, we tend to think that we can manage the situation, but then when shit hits the fan for real, we may already be rolling and not even have a chance to pull the trigger. If this happens to you when you are using the P.RIDE on group mode, as soon as your spotter sees the first fracture he should pull his trigger. On this mode, his backpack won’t be triggered but it would instead trigger the skier backpack remotely.

Some may clain that this may deconcentrate the skier and perhaps make him fall, but if you check my activation video again it’s not all that loud or violent. Moreover last spring we had a mini avalanche scenario that can be worth mentioning here. We were skiing in a forest, the snow was powder starting to transform in spring snow. At some point we had to cross a sort of mini gully around the 35-ish degrees. We decided to go one by one. At that time two people were down on the safe spot, two we were still up, and the last friend just dropped in. Sudenly a skier that had decided to follow us whitout us noticing apears from nowhere and as he sees that we had stopped, she tried to stop in quite a clumsy way triggering a mini slab. The rolling mass was extremely slow but steady and it was going straight towards my friend. Even though we were 2 spotters up and 2 spotters down and that we were all four screaming, he couldn’t notice or hear anything from us. At the end he was just faster than the mini avalanche and he didn’t even notice while things were happening. If this would happen with the P.RIDE I will trigger the heck out of his backpack for sure. Moreover, this should make him understand what is happening and have him reacting doing a quick diagonal to the next safe island instead of keeping his stily turns game on. 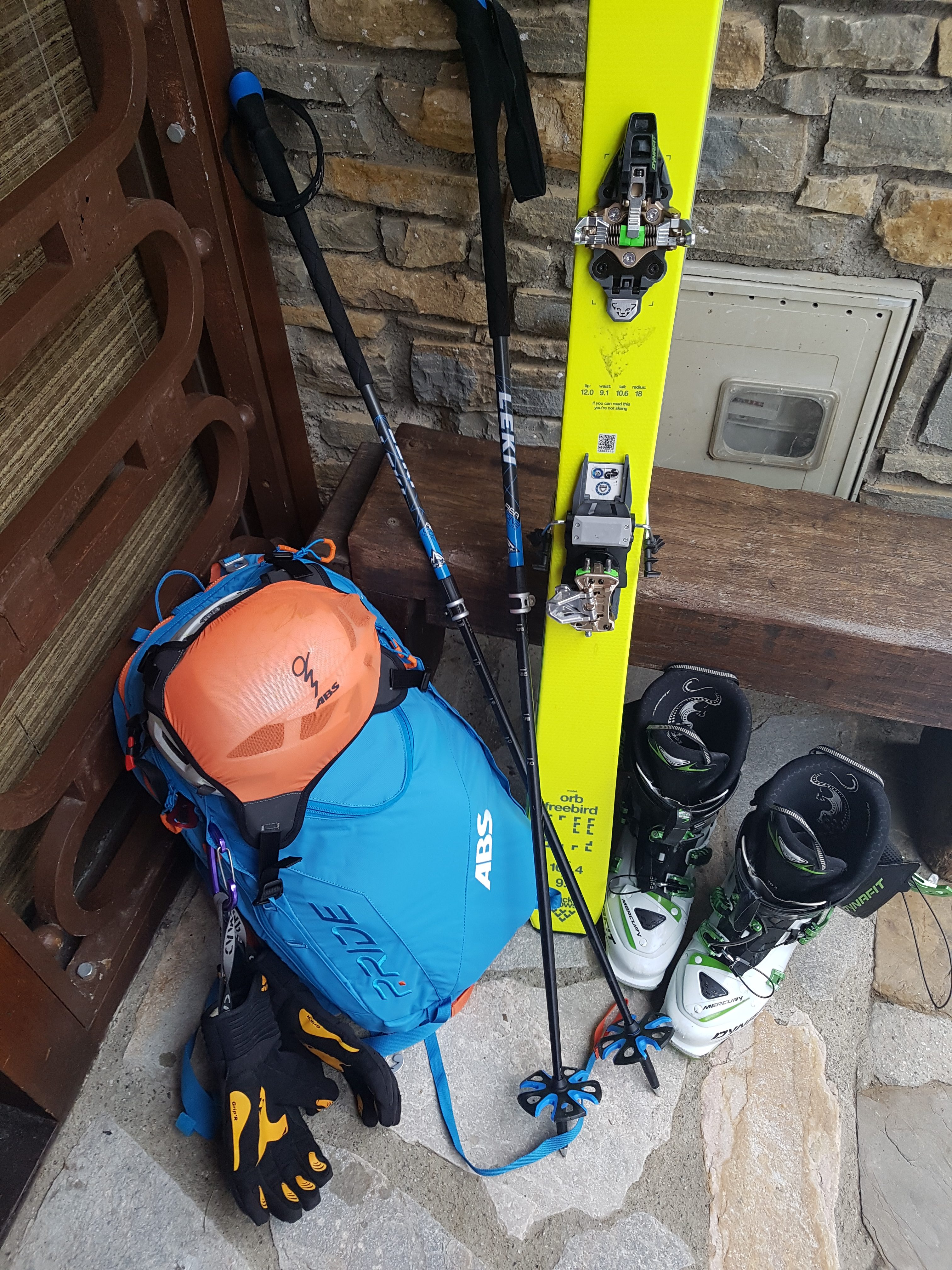 Keep safe out there and wait for the next update!