There is no doubt that touring gear is been taking giant steps on the last seven years. It’s crazy how every other year a new game changer innovation keeps hitting the market. We are getting to the point were planks are excelling both in technical uphills and downhills, all achieved at really reduced weights. However, the truth is that we still have a lot to do, especially in terms of durability. In this article i’m going to review some personal experiences involving plank destruction and my criteria for choosing gear has evolved after those experiences.

The “inconvenience” of having gear improving this fast is that we keep demanding for more.

I keep aside from full carbon fiber constructions. Why?

In my case I’ve never been convinced by full carbon constructions: they are not reliable on hard snow and I do not feel confident entering with them in all kind of terrains. Moreover, they are known for not been too durable. After a year they tend to loosen up, and most people that ski thm quite strong and push them in different snow conditions tend to break them in less than a year.

If I keep aside from full carbon constructions it is not all the way because of the carbon itself. Lately we are seen some clever carbon proposals with achieved transmission on the downhill and at ridiculous wights. However, more and more manufacturers are launching plank proposals around 90mm underfoot, 170cm, with wooden cores reinforced with carbon, linen and other fabrics that ski really strong and that weight around 1250g.

1250g is a weight that allows me to tackle big days with technical uphills and downhills with comfort, confidence and safety. Eight hour days, exposed kick-turns, bootpacking over spurs and ridges, steep skiing, taking some cliff drops and even pulling some air tricks. As I see it, for me optimizing is not achieving the lightest weight, but achieving the strongest plank with higher volume and most effective edge around 1250g. Some years ago there were not that many proposals on the market that could ski properly at that weight. Nowadays there are loads of them, but the problem is that they are not very durable.

Last year I struggle quite a bit deciding which should be the best option for my kind of ski for ski alpinism activities. At the end I went for the K2 wayback 88 in 167cm. 1275g, a solid effective edge, a light rocker really at the end of the nose, and of course it’s ECOre construction that combines really smartly balsa wood, linen fabric and other materials to excel in rigidiy per gram ratio. 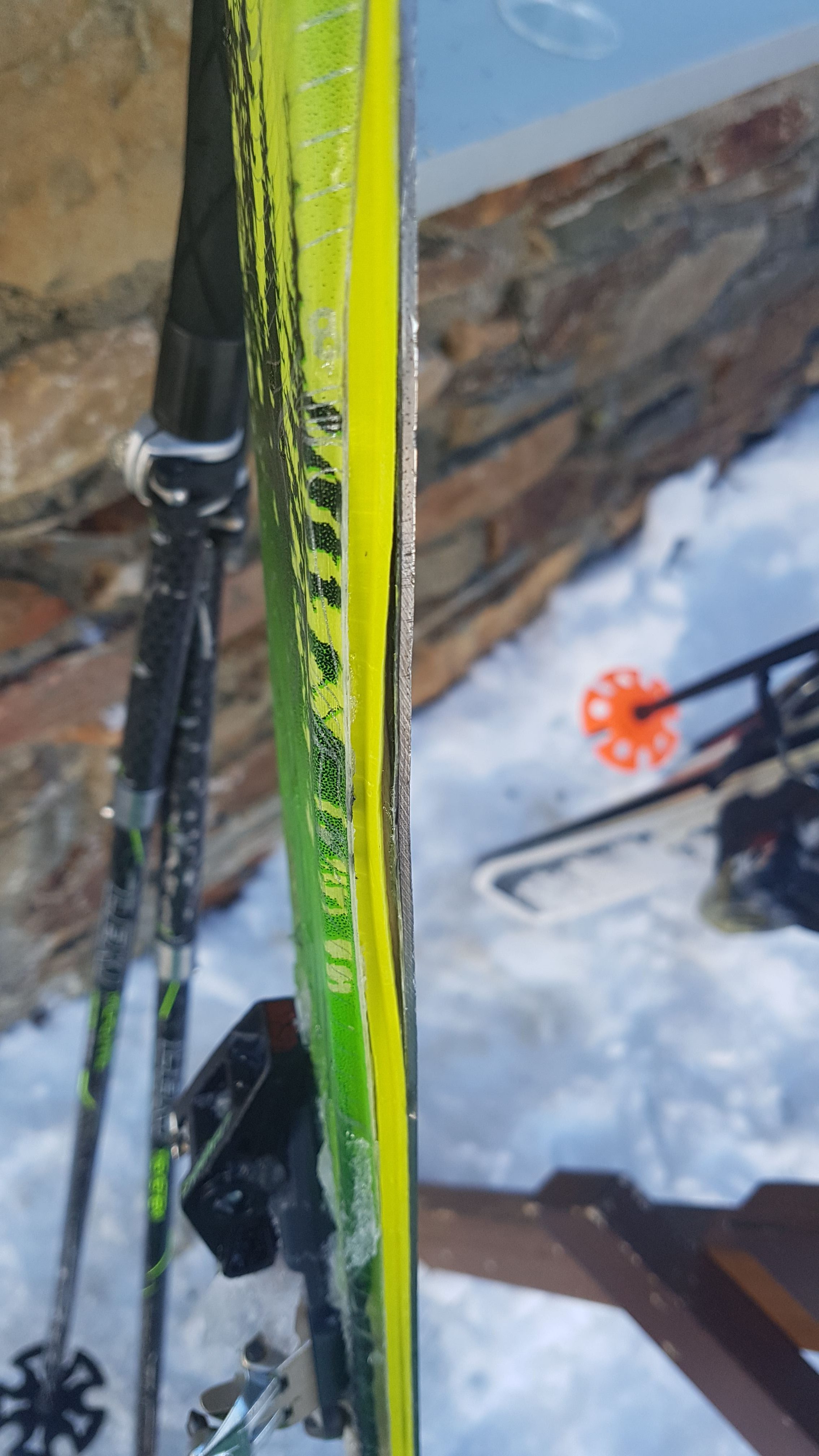 It’s been my fetiche ski since the spring, both in uphills as well as downhills. The problem, is that after some thirty days of use, I’ve displaced the rail and cracked open the layers. I took a pretty small cliff drop and landed on snow. Well, perhaps there was a rock under. It wasn’t particularly a big or nasty rock, there was not a big impact neither a strong snag. In fact I didn’t even lost stability, the ski didn’t pop out,  neither I fell down. I have given this ski stronger hits, however this time was just in the right place and on the right way to let it completely knocked out.

Yeap, it looks quite nasty. Well, right now it’s actually on the workshop and they have assured me that we have a chance of fixing it.

For a ski that costs 600€ full price, I feel ok paying for its performance, but I would definitely like it to have a lifespan longer than four months.

Is this an isolated case? Is it limited to K2?

Last week I went for a ride with my friend Sergio and he took out his new Scott Cascade 95. I think it was the fourth time he was riding them. It was one of those days that we were taking short uphills to access backcountry terrain seeking some remains of powder, happy riding, freeride, forest skiing and some cliffs to drop.

That day we scratch against a few rocks, pretty much like always in this kind of plans. However that day one of those hidden sharks bite stronger on those cascade. It ripped a very big patch of sole all the way till the rail exposing all the inner fibers. Sergio got extremely lucky that somehow the edge didn’t got displaces and it neither affected the inner fibers.

It’s kind of funny, that just like in my case, it didn’t felt like a big shock. Well, they are still on the workshop and it looks like they are going to make it alive this time. Barely.

Ok, so those skis around 90mm that offer a proper core and optimize weight around 1300g are fragile and not very durable. Moreover they are fragile in a funny way. They hold firmly the endurance over time. They do not loosen up on rigidity as it tend to happen on full carbon skis after a season. They also seem to hold properly several impacts. I’ve taken on such skis many rocks that I thought could be potentially harmful, and then barely finding a light scratch, however they are very sensitive to random hits that will completely knock them out.

Does this also affects to wider and more reinforced planks?

In my group we like plans in the mountains, hopefully involving ski alpinism, but you can tell that we were freeride grooms in our youth days. Moreover, in the Val d’Aran, we quite often have good snow, so it’s worth bringing proper ski-ish gear.

For touring we normally have a quiver of two options. One more focused on ski alpinism and long activities around 90mm underfoot and another more rider around 108mm. In my group we know that we can pretty much do all kind of tours with both options and quite often we end up doing ski alpinism with 108 in conditions are really worthy. 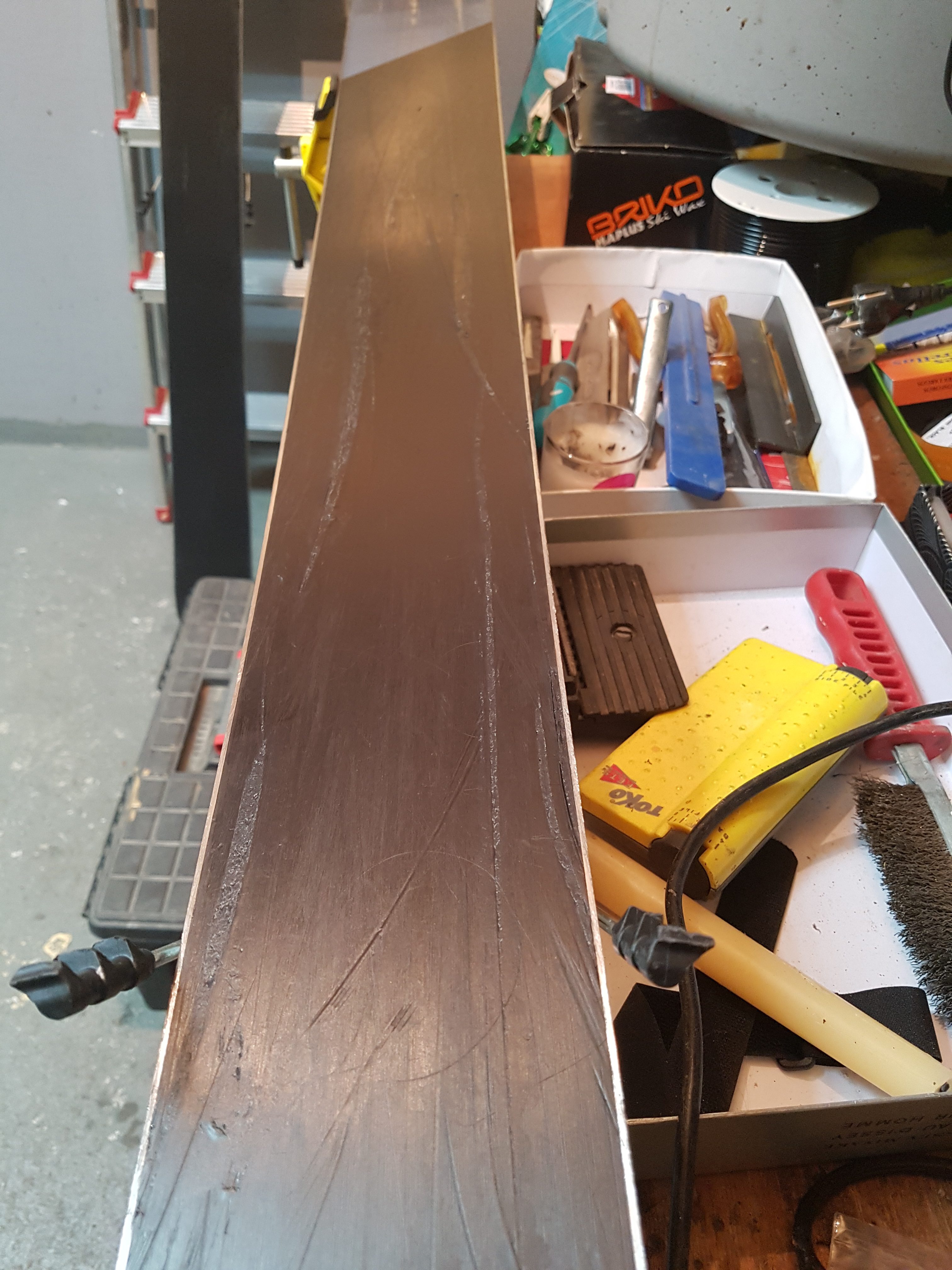 My 108 are the Armada Kufo from 2016. I use them as well on pure freeride days from the resort. It is a plank that falls pretty well in that typical category of around 108mm underfoot around 185 (in this particular case 188), around 1800g and having a proper reinforced core.

Generally skis in this category are proper downhill bombs. I chose this particular model because they  were very stiff, and had a progressive rocker that was as well stiff, making them have a long effective edge. A wider and softer rocker would have been more playful on deep powder, but wouldn’t bite as well on steep icy slopes.

It is a tough ski and I have been very satisfied with it. It has held everything over the last three seasons, I even call them the frankenskis. It’s quite amazing the amount of times I’ve taken big bites on rocks on them and some unfortunate rock landings. As you can witness, over the last three seasons I’ve ripped big patches of sole till the core but so far they do not present any structural damage.

Are all the skis in this category so strong?

The truth is that, considering the continuity of strong hits, I can say that the Kufo’s are strong skis, however it may be just the case that I still haven’t give them that random knockout hit. The shitty thing with the knockout hit is that it can come on the first month or in the fourth season.

My favorite stuntman and riding companion, Julen, chose las season the Volkl 100eight in 181. They are built on a smart and strong combination of layers. In fact they are heavier in 181 than the kufo’s in 188. They have some more rocker, but as well, that proves that they do have quite a lot of beef. Julen chose them because he knows he skis quite strong and he has already destroyed some pure freeride skis. He take big cliffs, dives in big corredors rapid and needs strong planks to hold his skiing.

Well, unfortunately he had that knockout hit pretty much on the second month of the ski. He had an impact while landing a cliff drop that damage the layers just over the rail. The rail was not displaced, and even thought he could glue the layers back, the damage was structural and the ski was doomed to die slowly. Something positive to say, and that emphasizes the sturdiest of this category of skis, is that they lasted properly the whole season even though with that damage. When Julen finally decided to replace them this year, it was more due to caution that because they were really unusable.

In this video the damage was already donne and s you can see, they see to still be able to hold  a bit of action.

Regarding ski touring gear, yes, we have extremely light and performing year and every year we achieve to shave some grams and achieve better ski cores, but still durability is the big assignment pending. This is something we have to consider when purchasing our gear. After my experience I do know for sure, that If I’m in between two models of planks, and one is 100 or 150g heavier than the other but significantly stiffer and stronger, then no doubt I’ll go with that one. If increasing 10% the weight of the ski is a big issue, then It’s probably better that you do a few sets of squats at your lunch break. And well, another ability to train, is to somehow achieve to bring that knockout hit on the fourth season instead of in the fourth week, but that one may be a bit tricky.

Happy riding for everyone!