Over the last two months I’ve had the change of coworking with Alberto Zerain for the project 2x14x8000.

Alberto has always been a big name for the Basque alpinism, but from the moment I got involved with 2x14x8000 and got to meet him, I haven’t stoped been impressed by his figure.

Discarded any probability of survival of Alberto Zerain and Mariano Galván on the Mazeno ridge.

After 6h of flight, the rescue helicopter has confirmed that the team was not on the ridge or in another point of the mountain. Moreover they have spotted a large avalanche at the base of the ridge just at the exact last point recorded by their racetracker.

His first expedition was in 1993 to Everest. Since then he has been in other 15. Alberto is not one of those alpinists that collects 8000 through the normal route, in fact, in recent years, he has been signing some of the most solid activities that we have witnessed in the Himalayas.

Despite such activities, Alberto has always been flying under the radar of the mainstream mountain media. One of the things that I really respect about him, is that when he comes down from the mountains he keeps up with his regular job; yeah, Alberto is a truck driver.

The day after landing in Bilbao with the summit of Annapurna on his pocket, he was already driving a delivery to Barcelona. In fact, it’s not unusual during his drivings, when he needs to do the regular stops, that he just runs up and down a mountain such as the Gorbea. Alberto is not all about attitude but has as well this ability to read the mountains. 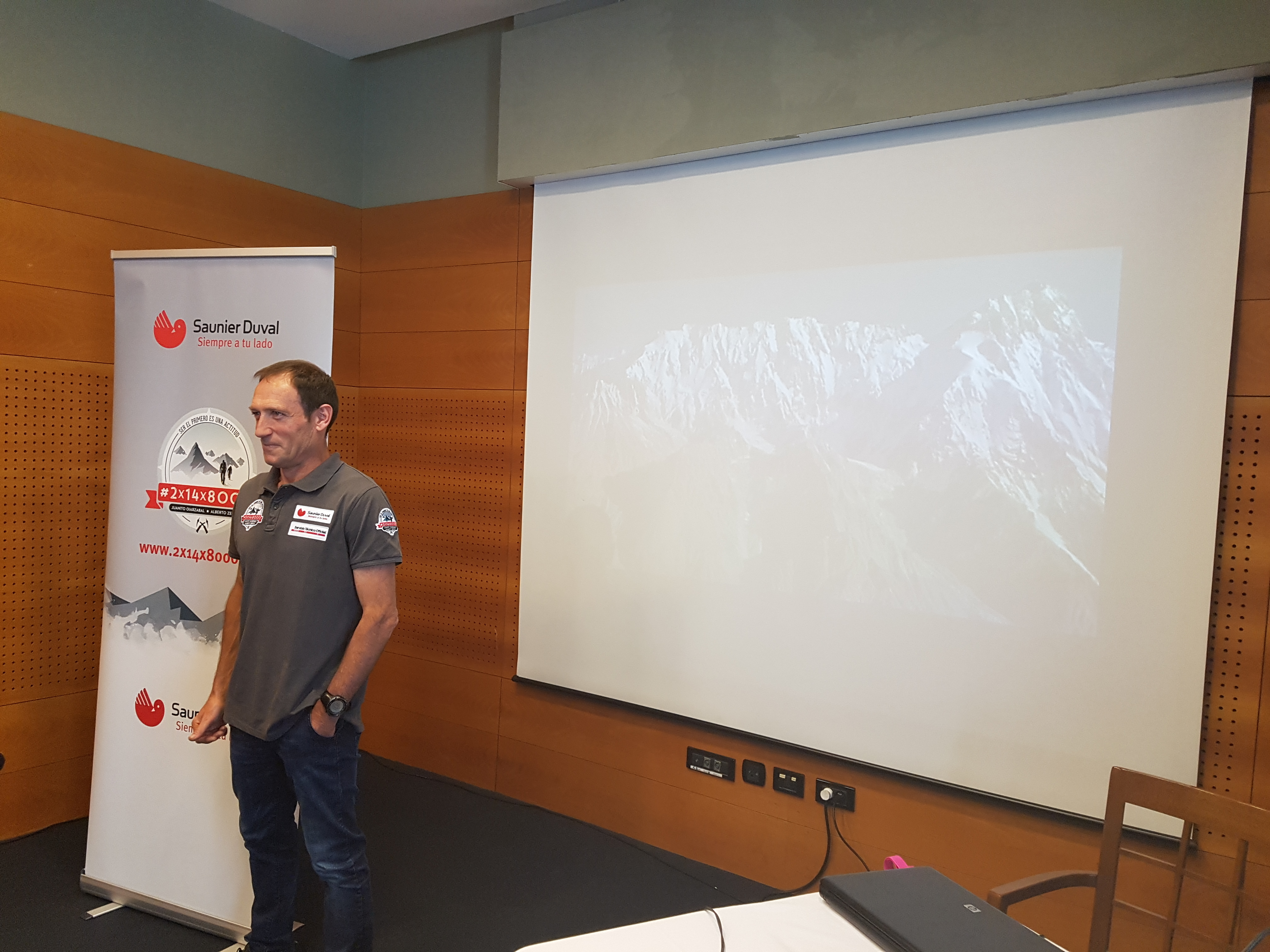 He catched up the international spotlight in 2008 during his solo ascent of K2 on alpine style. The summit day, there were a lot of people in the mountain. Alberto felt uneasy about the planning according to the size of the group and he judged it inadequate for the conditions of the environment.

He was specially concerned with the seracs hanging above the bottleneck. In the end he decided that the best strategy was going to go for a fast summit attack that should happen some hours earlier that the standard schedule. In fact he went for a fast attack from camp 3, skipping camp 4 and breaking track from the bottleneck to summit.

The strategy turned successful: he summited the mountain and made it back to base camp. That same day, eleven people died in the same route due to a serac fall that happened towards mid day. By that time Alberto was almost in Basecamp. He learned the news at basecamp and worked on the rescue team.

The trust on his own intuition combined with his criteria and understatement of the mountains gave the name to what we know today as #actitudZerain (#attitudeZerain).

Nowadays he is 56 and is far from slowing down. Last month he summited Annapurna on Alpine style through the 1950 french route to the north face. Annapurna is one of the lowest eight thousand peaks with 8091m, however it’s one of the most technical and deadliests climbs.

This French route is actually the first one ever climbed on an 8000 peak, however the last generations of alpinists had considered it an extinguished route because the glacier seems too broken and exposed as to be navigated safely.

When Zerain and Jonathan García got to the base of the mountain, their initial idea was to give a try to some more repeated modern route; their main candidate was the German route. Again, his ability of reading the mountains, made him doubt of the German route, judging it too exposed and he felt that the French route deserved at least to be checked. It seems that his hunch worked. In fact, he seems quite confident on the summit.

Just three weeks after making it back home, he was already on his way to the Mazeno ridge of Nanga Parbat; his old project from 2011.

The Mazeno is a technical 11km ridge with continuous climbs and down climbs that separates the Diamir and the Rupal faces of the mountain. It is the longest route in any 8000m and for several year it was considered as the last big challenge of the Himalayas.

Well, every few years it seems that we have a new “final challenge”. Nowadays it’s the winter ascent of K2, but probably in some years we will hear of a new one. The truth is that the Mazeno ridge has only been climbed once in 2012 by a heavy expedition of ten alpinist of whom only two made it to summit.

The plan of Alberto and his rope partner, Mariano Galván was to go for a light ascent, alpine style on a two rope team. Pretty much cowboy style; everything on the backpack and forward to the summit one step at a time. The fifteenth of june they made it to base camp and the nineteenth they were already on the ridge; apparently for checking the route up, but with everything on their backs just in case they saw the gentle side of Nanga Parbat.

Due to bad weather, progress was made slow. They were parked in the tent for several days, burning away their food and fuel reservoirs. After eight days of activity, on friday 23rd we communicated with them for the last time. They claimed to feel strong, motivated, concerned with food and gas but waiting for the mountain to give them a chance.

Thanks to their racetracker we know that during the next morning they achieve to progress during six hours. However from that moment on we did not receive any further news. Four days later a rescue helicopter got sent for searching the team but the mission had to be canceled due to bad weather.

For some agonic four days the climbing community gathered around Alberto and Mariano and sent all their support.

Finally, on saturday the 1st of july, the helicopter could fly again confirming that they were not on the ridge or in any other point of the mountain. Moreover they spotted a large avalanche just at the last spot recorded by their racetracker destroying all hopes of survival.

The last time I spoke with Alberto was just a few days before he headed to Pakistan.

I must confess that I was overwhelmed. It just seemed like a massive and very complex project. He told me that the Mazeno ridge requires a strong commitment. It can get very difficult to retreat from that route. He insisted that the strategy was going to be light but without cutting on gas and food. his voice was calm and solid. Every section of the ridge was segmented and studied. Moreover he was having several plans of possible retreats through the Diamir face of the mountain in case shit hit the fan.

He made me feel confident and supportive. It was not going to be an easy dance but for sure he was having the tools for giving it a big bite.

Alberto won’t ever come back from that mountain, but for sure his simplicity and tenacity are going to stay with us for a long time. #actitudzerain.